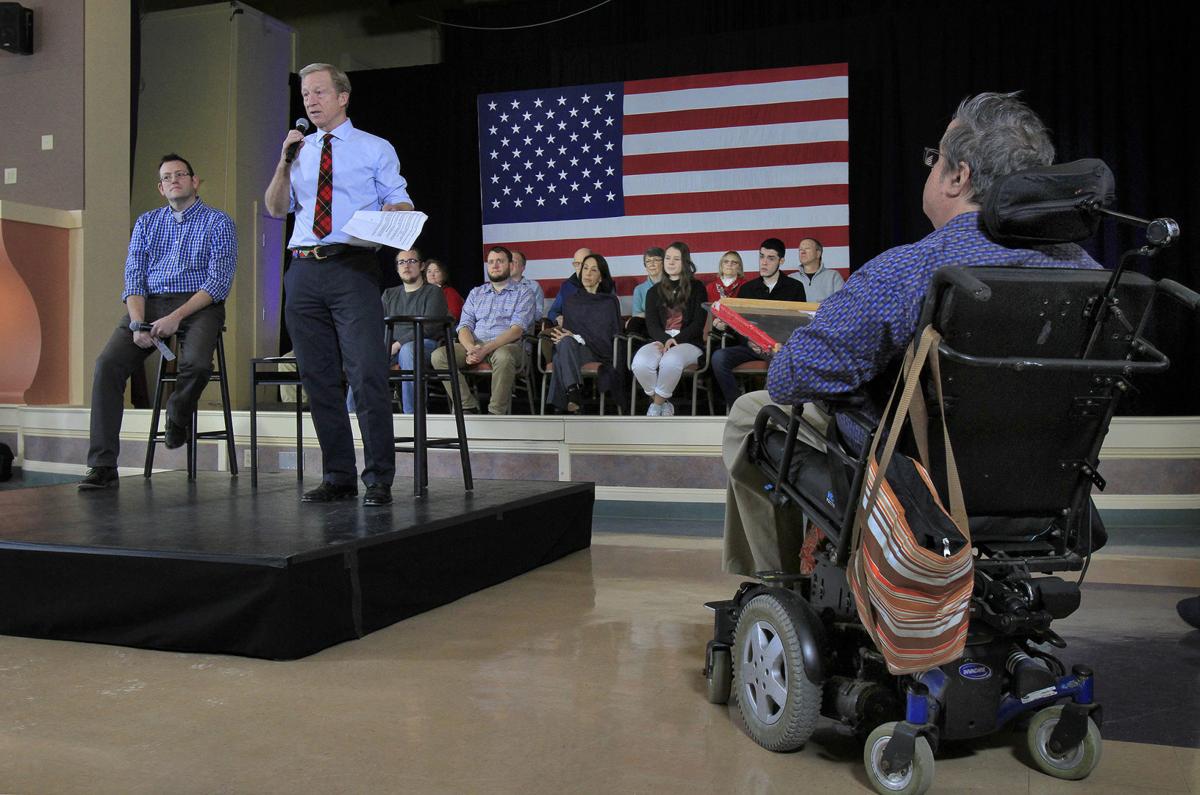 Tom Steyer speaks at the Crotched Mountain School on Saturday to residents, family members and staff. 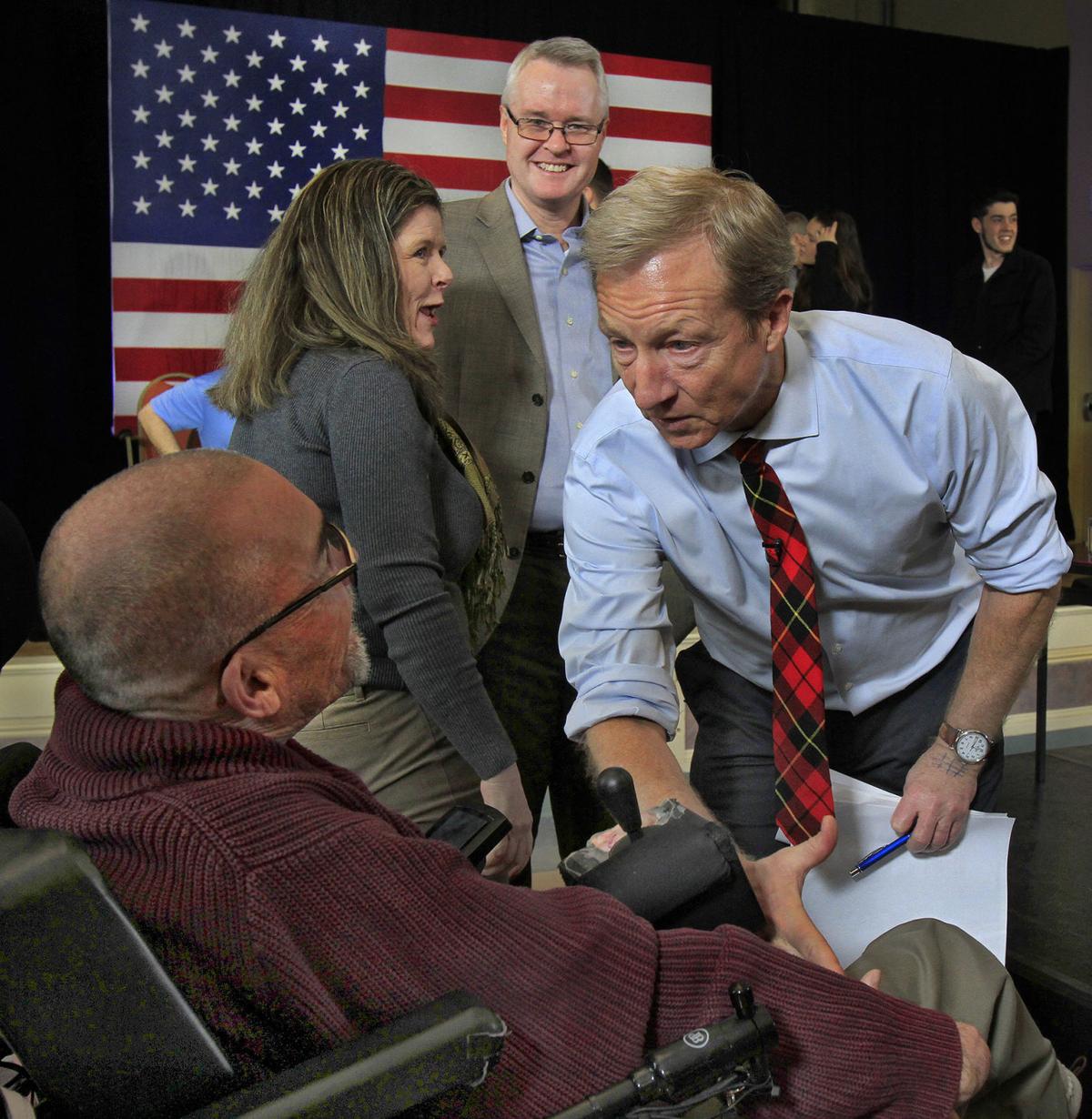 Tom Steyer speaks at the Crotched Mountain School on Saturday to residents, family members and staff.

GREENFIELD — Unlike in his myriad campaign commercials, Democratic presidential hopeful Tom Steyer’s demeanor was more subdued Saturday at the Crotched Mountain School, where he spent most of his time listening to parents describe their children’s struggles living with disabilities.

The California billionaire, 62, was the first presidential candidate to accept an invitation to visit the school, according to David Johnson, vice president of marketing and communications for the Crotched Mountain Foundation. The school, for children in kindergarten through 12th grade-plus, includes 24-hour health care, education, vocational experiences and enrichment programs, according to its website.

Steyer heard stories from parents working to navigate hurdles for their children with developmental disabilities, from housing to employment.

Jon Erickson of Scituate, Mass., told Steyer how he worries about whether his 18-year-old daughter, Karli, will be able to have somewhere to live with the care she needs once she reaches age 22 and can no longer stay at Crotched Mountain.

“And then she needs to go into adult living, and finding housing is a real challenge,” Erickson told The Sentinel. “ ... It’s a big problem, so care for anyone with a disability is challenging.”

Questions were prepared in advance, but Steyer would often engage with people by asking them to elaborate further about their personal experiences if they were comfortable doing so.

In his exchange with Erickson, Steyer said the American government is failing its citizens with disabilities by leaving funding for assisted care mostly up to the states.

“We have a lot of money. We’re the richest country in history, honestly,” Steyer told Erickson and the crowd. “And the question is, what are our priorities? We have enough money, the question is what do we care about.”

Within his own campaign, Steyer said he asked all staff to disclose, if they wished, whether they had a disability, and he told the audience 12 percent of his team is living with a disability.

The former hedge fund manager said he is “in favor of all the taxes” on the wealthy, and called for a drastic uptick in investment in affordable housing and wages for health care workers in rural areas.

In addition to his business background, Steyer is the founder of NextGen America, a nonprofit organization geared toward young people that advocates for climate change legislation and voting rights. As a candidate, Steyer no longer runs NextGen.

Although disability rights have remained a rare topic in the televised debates, Steyer was asked Thursday night at the Politico-PBS debate about what he would do to better integrate Americans with disabilities into the workforce.

Steyer was called out by Politico moderator Tim Alberta for giving a non-answer, and was followed by answers from New York tech entrepreneur Andrew Yang sharing his story of raising a son with autism, in addition to Massachusetts Sen. Elizabeth Warren talking about her history as a special education teacher and her plan to invest more in special education teachers and programs.

In an interview with The Sentinel after the town hall, Steyer said he thought the exchange at the debate went well, and emphasized that his appearance at Crotched Mountain underscores how he would make a better president as an “outsider” willing to call attention to issues that may go overlooked among national politicians.

“I thought what I said [at the debate] is what I said today, which is this: It’s a question of priorities,” Steyer said. “That, in fact, I think we have dramatically misplaced priorities in terms of our budgeting, that we have more than enough money to support people in this country, specifically people with disabilities, and specifically with things like the Individuals With Disabilities Education Act, which we fund with a third of what’s promised by the federal government.”

Steyer also addressed criticism about his place on the debate stage over sitting senators and governors, and what he brings to the table that the others in the field do not.

“Look, I think I’m an outsider and they’re all insiders,” Steyer said. “I think I’m running on a very simple thesis, which is government is broken, and that if we’re going to take back the government from corporations who bought it, who’s going to actually do that?

“Someone from inside the system, or someone who for 10 years has actually been taking on those corporations?”