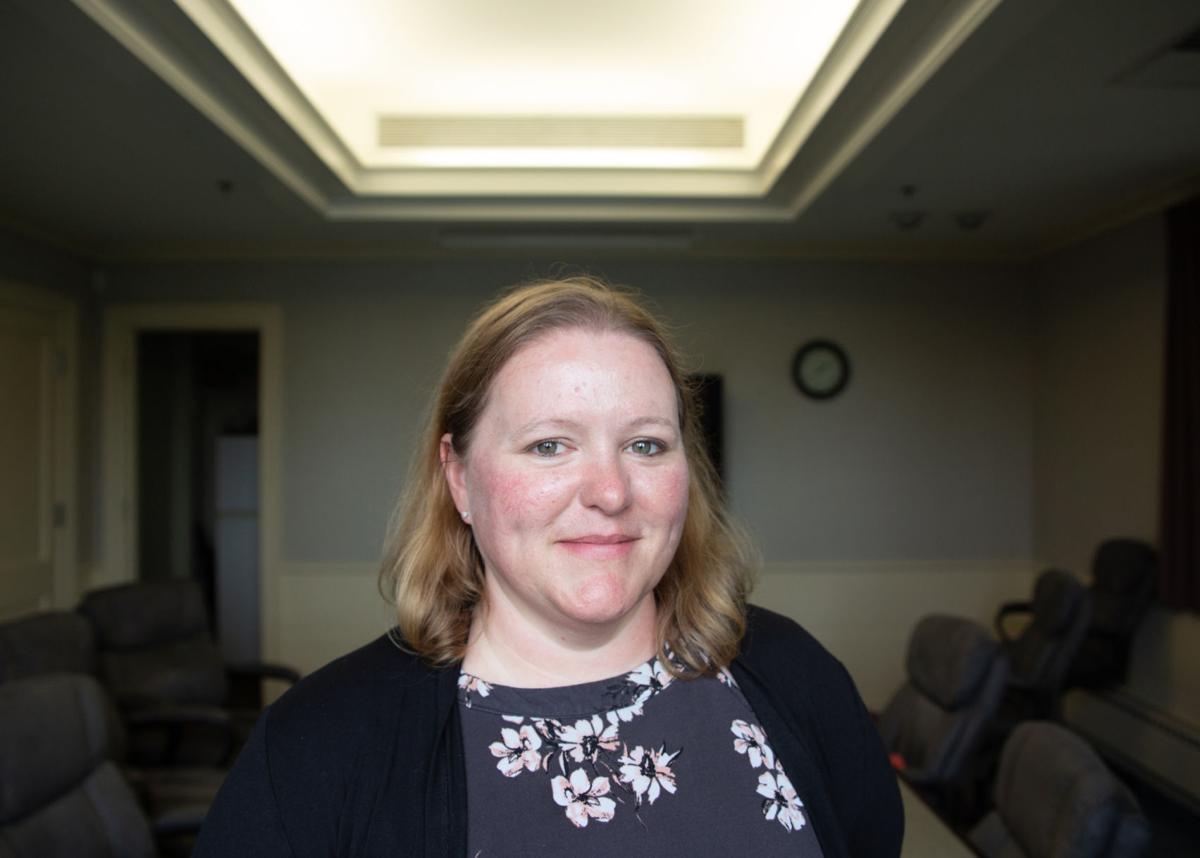 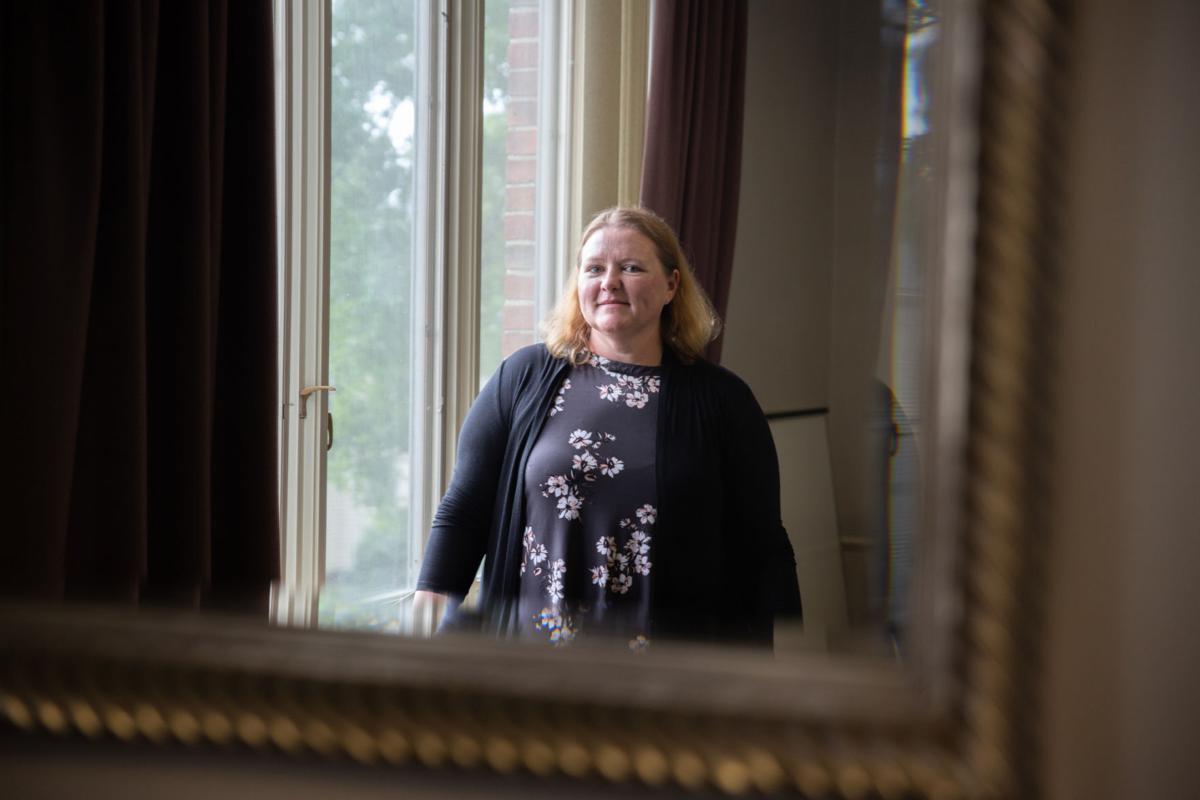 Beth Daniels, shown in the conference room at Southwestern Community Services’ offices in downtown Keene, will soon step into the role of CEO.

Beth Daniels, shown in the conference room at Southwestern Community Services’ offices in downtown Keene, will soon step into the role of CEO.

Beth Daniels sits in the conference room at Southwestern Community Services in Keene and says she’s a bit nervous about being interviewed, admitting she tends to be an introvert who avoids the spotlight.

That doesn’t come across at all — she’s enthusiastic, charming and talkative — as she describes her two decades of work at the agency. She started when she was just 22 as a case worker, eventually progressing to being named its next chief executive officer. She succeeds John Manning, who is retiring after working there for 31 years, the last seven as CEO.

“I’ve got to get accustomed to being the outside voice for SCS,” she says, as she prepares to officially take on her new title July 2. “It’s hard for me to talk just about myself, and not SCS, since it’s been such an important part of my life.”

SCS was incorporated in 1965, one of five Community Action Agencies in New Hampshire that were all founded by the 1964 Economic Opportunity Act as part of Lyndon B. Johnson’s signature War on Poverty. SCS is the largest provider of housing and social services to residents of Cheshire and Sullivan counties. During its last fiscal year — ending September 2020 — it provided assistance to 44,555 people in 19,725 households.

With an annual budget of $14 million and 133 employees, SCS offers a cornucopia of services — transitional housing and emergency shelters, family housing, senior rental housing, education and child care through seven Head Start programs, nutrition and health counseling, fuel assistance, weatherization and energy-conservation initiatives. It also rehabilitates housing in the two counties and provides five bus transportation routes for residents of Newport and Claremont, as well as employment services for people with developmental disabilities and workforce development for the unemployed. This summer it will add Dartmouth-Hitchcock in Lebanon to its existing Claremont-Newport bus operation.

“On my first day as CEO, I’m going to let everyone here know that we’re going to keep on keeping on,” says Daniels, a Swanzey native who now lives in Keene with her wife, Gia Farina, program director for Meals on Wheels at Home Healthcare, Hospice and Community Services.

The daughter of William Daniels of Richmond and Kim Willard, who now lives in Nokomis, Fla., Beth Daniels attended Monadnock Regional High School, and was inspired by what she characterizes as a special cadre of caring teachers who influenced her significantly — Scot Tolman, Deb Crowder, Paul Teitelman, Warren Smith and Steven Streeter.

“We had a cool group at Monadnock,” she says. “It was a great place to be.”

After Monadnock, she enrolled in Franklin Pierce in Rindge, and, while working full-time as a waitress in local restaurants during the day, attended night school and graduated in four years with a bachelor’s degree in human services.

“I worked in restaurants from a young age and learned a lot about work ethic, being there for a team and being dependable. I did this from 13 to 19 years old. My mom was a very hard worker as well; she waitressed every single day, and we learned from her that if you wanted things, you had to make it happen.”

In addition to her mother, Daniels also praises Franklin Pierce for offering alternative scheduling, and evening and weekend classes. “I so hope that they continue to offer those options for folks who simply must work in order to get through any kind of higher education,” she says.

Daniels’ career at SCS began as a case worker in what was then called the “Welfare to Work” program, where she learned the ropes about helping people who faced any number of hardships.

“I bring a balanced perspective,” she says. “Everyone has their own struggles, but there are solutions for those problems, there are resources available.”

She refers to a quote that she keeps readily available on her cellphone, from Swiss psychologist Marie-Louise von Franz.

Daniels explains that even though many kind and charitable people wish to help others, “sometimes folks in their desire to help can bulldoze through without giving people the opportunity to develop their own resources.”

On the other hand, some believe that laziness is the only problem and bootstrapping the only solution.

“The truth is somewhere in the middle,” she says.

Daniels says she’s been blessed to work with two mentors at SCS — Gail Merrill and Manning.

“I was lucky to interview with Gail for a case management position … she was kind and empathetic but also strong and no-nonsense. She guided me and helped me grow while she was in her role as community services director; she has since retired but I sometimes still ask myself, ‘What would Gail do?’ ”

Manning, she says, “was always giving me honest feedback and information, hearing me out when I had an idea that seemed like it came from outer space at first, trusting my judgment and helping me find the balance between caution and seizing opportunities when possible. I’m really, really going to miss him.”

After her initial appointment as a case worker, Daniels was promoted to case manager in SCS’s transitional housing initiative. The program helps house people for whom homeless shelters or permanent housing are not appropriate, primarily due to significant mental health conditions. Following that was another promotion to director of workforce development, then yet another advancement as director of SCS’s Energy Program, where for a decade she managed 10 employees in the weatherization assistance, fuel assistance, home heating and senior energy assistance programs.

Five years ago, the SCS board decided the institution had grown so large it needed a chief operating officer to oversee and coordinate all of its varied operations as well as their directors, a job reporting directly to the CEO. Daniels was selected for the task.

“I don’t think people realize how much we do, or how much real estate we own and must maintain,” she says. According to its most recent annual report, SCS owns $86 million in housing developments, child care facilities and commercial and retail space. It also, by contract, manages $33 million in housing developments and commercial real estate owned by other entities.

SCS operates in 40 communities within the two counties, with four homeless shelters, 11 family housing developments, a dozen senior housing facilities and seven Head Start centers. About 80 to 90 percent of its funding, depending on the year, comes from federal and state agencies. The remainder is from the towns and cities it serves, as well as private contributions, including the United Way.

“COVID was a collective trauma,” she says. “For some, it was pure frustration, but for others worse than that. We’re just coming out of it now, we’re still dealing with it as employees, neighbors, friends.”

One of her first priorities is to start a strategic planning process to accommodate the new post-pandemic landscape.

“Our mission statement talks about low-income households, and it should be renamed vulnerable households. We have to make sure they have the resources to come back. It’s been so tough on families, older adults and kids,” she says.

Despite the challenges ahead for SCS, Daniels says it’s important to concentrate on the dynamics of how people can help themselves.

She says it’s key to not judge the circumstances of why someone might be experiencing a tough time, but to identify resources and solutions to help them move forward.

“There are hundreds of possible scenarios, and it’s tough to explain sometimes why someone may be going through a difficult time, there are so many variables,” she says. “The key is to create a landscape of opportunity for folks to get their needs met so they feel less vulnerable or frustrated or hopeless and can focus on the road ahead.”

At a glance: Beth Daniels