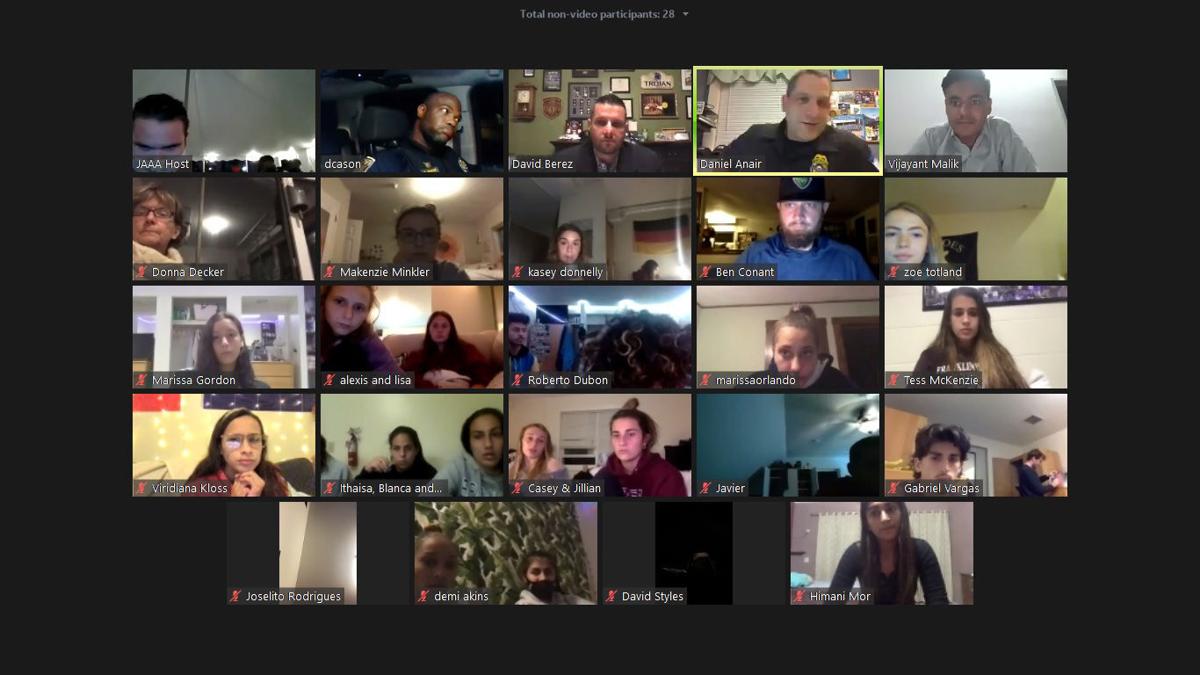 Monday night’s panel discussion, hosted by Franklin Pierce University’s Justice in Action Athletic Alliance, drew 55 viewers to a live broadcast over Zoom, along with an in-person crowd of 40 people under a tent on campus. 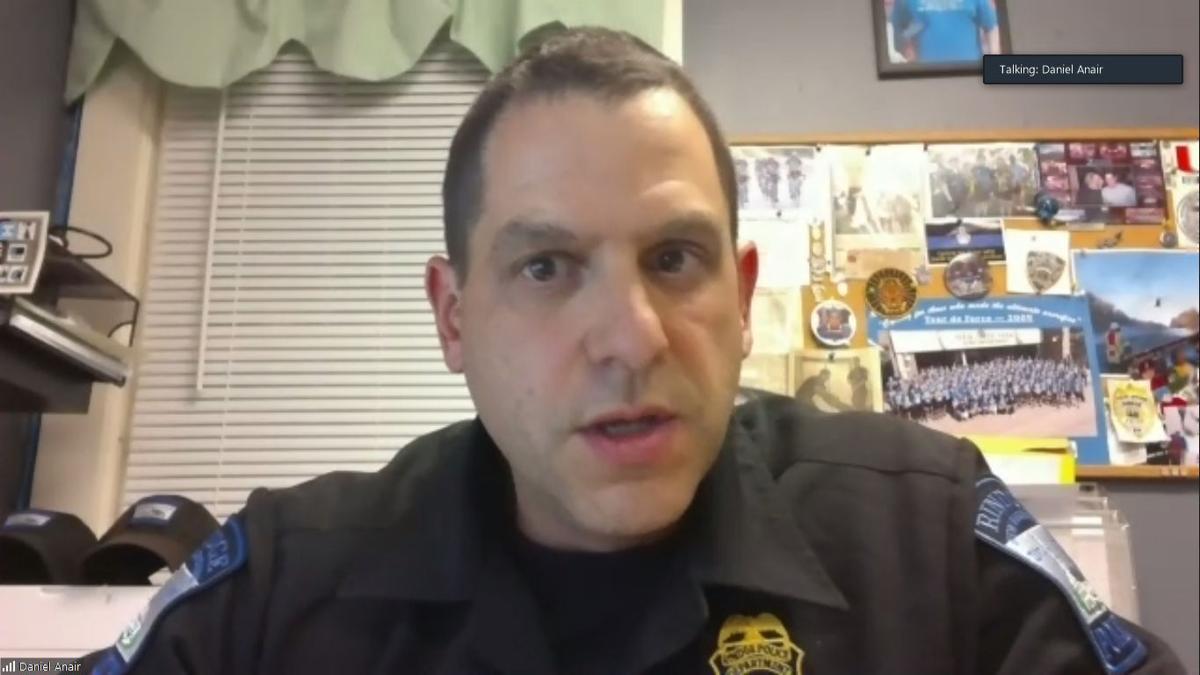 Rindge Police Chief Daniel Anair, one of the panel members for Monday night's discussion, called it a "no-brainer" for him to want to participate in the conversation.

Monday night’s panel discussion, hosted by Franklin Pierce University’s Justice in Action Athletic Alliance, drew 55 viewers to a live broadcast over Zoom, along with an in-person crowd of 40 people under a tent on campus.

Rindge Police Chief Daniel Anair, one of the panel members for Monday night's discussion, called it a "no-brainer" for him to want to participate in the conversation.

RINDGE — When the Justice in Action Athletic Alliance began taking shape over the summer at Franklin Pierce University, student athletes leading the new group knew right away how they wanted to begin pursuing their mission to find solutions to systemic injustices.

“When the question was presented, ‘What kind of initiatives would motivate your participation,’ the first response we received was, ‘We want to connect with law enforcement,’ “ said Jonathan Garbar, FPU’s women’s soccer coach, who helped launch the new student-led alliance.

And that’s exactly what happened Monday night, as the JAAA gathered six current and former law enforcement officers from around the world for a panel discussion on race and policing. The goal of the 90-minute event was to open a dialogue between students and these officers, and help both groups learn from each other, said Zach Brehmeyer, a senior offensive lineman on the Franklin Pierce University football team, and one of the JAAA’s co-presidents.

That sort of community engagement is why Rindge Police Chief Daniel Anair joined the conversation.

“This was a no-brainer. I had to participate, and I had to make sure that every student up there knew that my stance as the police chief here in town is that you are community members. You are important members of the community, and you should be treated as such,” Anair said during the event, which drew an in-person crowd of 40 people under a tent on Franklin Pierce’s campus, and was broadcast live via Zoom, where another 55 people tuned in.

The other members of the panel, whom JAAA members reached out to through their own networks and invited to speak with the group, were: David Berez, a retired police officer from the police department in East Windsor, N.J.; Sgt. Dwaymon Cason of the Davie Police Department in Florida; Agent Rose Rivera of the North Carolina Department of Revenue; and Malik Vijayant, a police inspector in Haryana, India.

“We wanted to have a panel that reflected both local, regional and also international, because our campus reflects those communities,” Garbar said. “We wanted something that really would represent the diversity of our campus.”

The discussion, which centered on questions from students, touched on issues ranging from suggestions on how to discuss the Black Lives Matter movement with people who view it as anti-police, and whether or not American police officers currently receive sufficient training. On the latter issue, Anair said he believes officers in New Hampshire and nationwide need more training.

“As a whole, I believe that the biggest part of police reform needs to come in training,” he said. “And there needs to be a lot more training available. The unfortunate side on that is the much more amount of training you’re talking about translates to a lot more money needed for budgets, and that’s a tough thing, especially for a small community like this that has a very small budget and a very small agency.”

Overall, the event Monday night encapsulates the sort of conversations the new group hopes to generate on Franklin Pierce’s campus, and throughout the community, said Alena Masterson, the group’s other co-president.

“As a student athlete, I think it was really important for me to have a voice, and not only that, but give a voice to other people,” Masterson, a junior from Pelham who is on Franklin Pierce’s track and cross country teams, said. “I think as students and as student athletes, sometimes we think there’s not a lot we can do, but I think this organization really shows just how much we can do if we band together.”

Masterson added that she hopes the JAAA will long outlast her time at Franklin Pierce, and that the group will eventually inspire other colleges and universities to form similar groups. To start, the group plans to hold weekly events, like Monday’s panel discussion, this semester focused on three main issues: racial justice, sexual assault and mental health, Masterson said.

The JAAA officially formed in late July, Garbar said, and has since grown to just over 70 members. While student athletes lead the group, the alliance is open to all Franklin Pierce University students, staff and faculty. Eventually, the group hopes to include residents of the surrounding communities, too, Garbar said.

For now, Garbar added that the group is focused on building its membership and harnessing student athletes’ public platform to address issues like systemic racism in the United States.

“There was just, I think, an overall sentiment that Franklin Pierce University needed to become part of the conversation,” Garbar said. “We wanted to be drivers of the initiative for social justice within the region. And we’re really proud of kind of planting our flag in the sand.”

More information on the JAAA is available on the group’s Twitter page at www.twitter.com/FPURavens — JAAA.