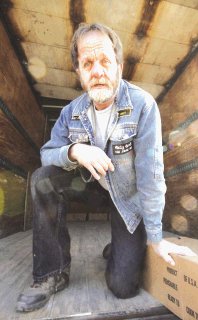 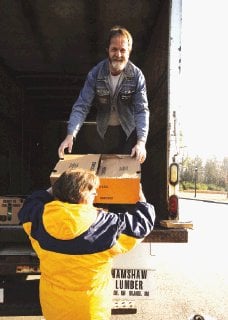 Carl Babbitt of Stoddard and about 15 volunteers from the Monadnock Covenant Church hand-delivered 43 turkey meals Saturday to families that otherwise may not have a Thanksgiving Day dinner.

They will do it again for Christmas, also bringing toys to children who may be deprived of presents. Babbitt, 52, began the Keene church’s holiday drives back in 2005.

It’s a common act of generosity this time of year — many churches, charities and individuals conduct similar food drives.

But Babbitt’s initiative is different. Babbitt has a troubled, hellish story to tell. He’s not a minister or philanthropist.

His meals are going to families of inmates at the Cheshire County jail in Keene. He was incarcerated there himself for a year when the jail was in Westmoreland. He also served time in Massachusetts Correctional Institutions in Walpole, Norfolk and Framingham, 11 years in all.

In 1990, homeless and woebegone, Babbitt stabbed a man to death on a rainy summer night in Worcester, Mass. It was the nadir of a long and torturous downward spiral. He was abandoned by his parents, severely abused by a foster family, mired in alcohol and drug abuse.

“And then I found a Gideon’s Bible in the drawer.”

Sitting in the back row of the Monadnock Covenant Church on Base Hill Road in Keene Thursday afternoon, Babbitt’s words come tumbling out in bursts. He wrings his hands. His long, sandy hair and beard fall into his face. He’s 6 feet tall, yet weighs little more than 150 pounds. He’s married. He shows you the refrigerator, jam-packed with turkeys, the counter full of fixings.

He’s been drug- and alcohol-free since Aug. 28, 1990, the day he stabbed Edward L. Dulmaine 2nd to death after the men quarreled over whether Babbitt was sitting on a Jeep or trying to break into it.

A childhood loston the city streets

Babbitt was born into a family of Jehovah’s Witnesses in Worcester, the oldest of four children. He says his father drank too much and paid too little attention to him; his mother threw him out of the house at age 14 because he rejected the family religion.

“Nobody showed me any values; no one showed me self-esteem. When your real parents tell you you’re never going to amount to anything, it’s not good,” he says.

He was sent to a foster home with six other teens. Quietly, he offers a few details about the sexual abuse, of being locked in a room for days at a time, of being beckoned at the will of his foster father. “That was rough,” he says in a voice barely audible.

He attended what’s now Worcester Technical High School and took an early interest in culinary arts. “I always liked to cook and bake and do those kind of things,” he said.

Yet it’s almost inevitable that the lure of inner-city streets on a wayward teen will lead to trouble. Babbitt drank, experimented with drugs, yet still hoped in the recesses of his mind that he could break the cycle. He graduated from the trade school on June 5, 1979, and enlisted in the Army the next day.

“I did it to run away from everything, but now as I look back on it, I realize it still caught up with me,” he says.

He returned to Worcester after his four-year hitch, still drinking, smoking pot and snorting cocaine, but still functional. He got a job as a groundskeeper at the College of Holy Cross, taking care of the football field and other athletic fields in 1984. He hung on to the job for five years.

His first serious confrontation with the law came after an outing at the former Whalom Park in Lunenburg, Mass. He and his friends broke into the nearby house of a Massachusetts State Police officer and stole several guns. His friends got caught and “rolled” on him.

Babbitt went into detox and spent a year in the Worcester County House of Corrections. When he was released, he tried to go straight, tried to join a church but was rejected. Church members didn’t want an ex-con in their congregation. “They basically looked at me in a very judgmental way, looked at me like I was a (bad) person,” he says.

Soon, Babbitt was back on the streets, back on drugs, using more heavily than ever.

It was raining that night and Babbitt had just cashed a check. He was homeless, sleeping in shelters, drifting through occasional day jobs, but on this night he had money for a drinking binge. He says he was sitting on a Jeep on Highland Street, not far from Worcester Polytechnic Institute. Edward Dulmaine, 26, the father of three and a friend of the Jeep’s owner, thought Babbitt was trying to break into it.

They fought. Babbitt broke free and ran to a Sunoco station across the street. According to a 1990 story in the Worcester Telegram, Dulmaine chased and cornered Babbitt, who pulled out a knife and stabbed him just below the left shoulder. Babbitt says he aimed for the shoulder, but the blade pierced an artery near the heart and Dulmaine bled to death.

Having an aunt in the area, Babbitt fled to the Monadnock Region and was on the lam for about a month. He says a trail of forged checks and larceny led Keene Police to him. He was arrested and returned to Worcester to face the murder charge.

That first night in prison, when those steel doors closed behind him, Babbitt vowed to change. He prayed, “Oh Lord, I can’t screw up my life anymore than I have.”

Babbitt and his public defender argued self-defense, but they reached a plea deal with prosecutors during the trial, whittling the charge to manslaughter.

Babbitt spent 11 years in prison, released early on good behavior. But he endured some brutal experiences, such as when a bloc of inmates were under the mistaken impression that he was a sex offender. Babbitt lifts up his shirt and shows the scar running diagonally from his stomach toward his waist, a result of their attack.

Ironically, one of MCI Walpole’s most violent criminals came to his defense and offered protection, he says, and the harassment ceased.

In turning around his life, his goal became to help others, especially those in danger of making the mistakes he did. Modeled after the famed Scared Straight, he took a 12-week course and joined the Second Thoughts program at MCI Walpole and Norfolk. It puts troubled young people face-to-face with hardened criminals for a glimpse of where they may be headed.

“I finally started to feel at peace with myself. I felt I could help somebody,” Babbitt says.

Babbitt spent his final year in prison at the Cheshire County jail in Westmoreland, serving time on the forged check and larceny charges accumulated after the stabbing. He was active in Bible studies and in the jail’s Victory House men’s ministry program, designed to help inmates transition back into society.

He was released in May 2000, at midnight on a Thursday, with basically only the clothes on his back. He shook his fist at the building and vowed he’d never set foot in prison again.

Today, he goes to jail twice a week.

Path of redemptionstarts in a church

Babbitt lived in a tent in Wheelock Park through that first summer and early fall. Three days after he was released — Mother’s Day — he walked into Symonds School, where the Monadnock Covenant Church was then holding its services.

There, Babbitt was greeted by church members Doug Mealey, Ron Rzasa and Bob DeJong. He was hesitant to tell them his background, that he had been released from prison three days earlier, but the story slowly came out. No one told him to get lost. Instead, they welcomed him into the church.

“I can’t tell you how much it meant to me to be accepted,” he says.

That was a decade ago and Babbitt has since thrown himself into the church, its teachings, prison outreach, society. He has written letters and essays about that seminal moment of acceptance, including one titled simply, “Set Free.”

He first got a job as a handyman with the Emile Legere-owned Hillsboro Maple Leaf Village for the elderly; today he drives a truck for Hamshaw Lumber of Keene.

In 2003 he was eating dinner at the Firehouse Cafe on Court Street when he saw a woman across the restaurant. Her name was Marilyn, he introduced himself to her and today they are married.

That same year, three years after he promised to never go to jail again, Pastor Roger Brooks of the Village Church in West Swanzey asked Babbitt if he would volunteer in the jail’s Victory House program.

“Three years later, there I was, back in jail,” he says with a rare chuckle. “I am willing to do whatever it takes to help any man or woman change the same way this church has helped me.”

He authored a flier titled “Call to Action” for the men’s prison ministry. Its first words, highlighted in bold, read, “No one enters prison as an act of manhood.”

He believes that jail actually saved his life, that he would have otherwise died on the streets. But the crime he committed will forever bury him in remorse. He says he hopes God will forgive him, just as Jesus forgave those who crucified him. He says this often.

Babbitt is also active in Iron Sharpens Iron, a network of individual ministries that are geared toward men. Recently, at a leadership conference in Worcester, he won a lottery for a $5,000 scholarship to take courses at Bethany Bible College, which he has already started.

Church member Dawn Andonellis of Keene says she comes from a “complete whitebread world,” far removed from Babbitt’s life and the hardscrabble ways of prison. Thanks to Babbitt, now she conducts creative writing workshops at the jail.

“He was my inspiration to do that — just to see how enthusiastic he is. He’s just a very neat and humble guy,” she says.

The holiday food drive is Babbitt’s pet project. C&S Wholesale Grocers donated most of the turkeys and all the trimmings came from a variety of area markets.

Inmates at the jail fill out forms describing their family situations for the holidays, and that’s how Babbitt and his volunteers come up with a number — 43 this year. He chokes up thinking of one family last year, where both parents were in jail and a grandparent was taking care of the kids. A lot of tears were spilled at the front door when he gave them their meal.

“He’s telling them somebody cares about you,” Andonellis says. “He’s rough and kind of grizzly — and I really like him.”

“I had always been hurting people,” he says. “Now I’m helping.”