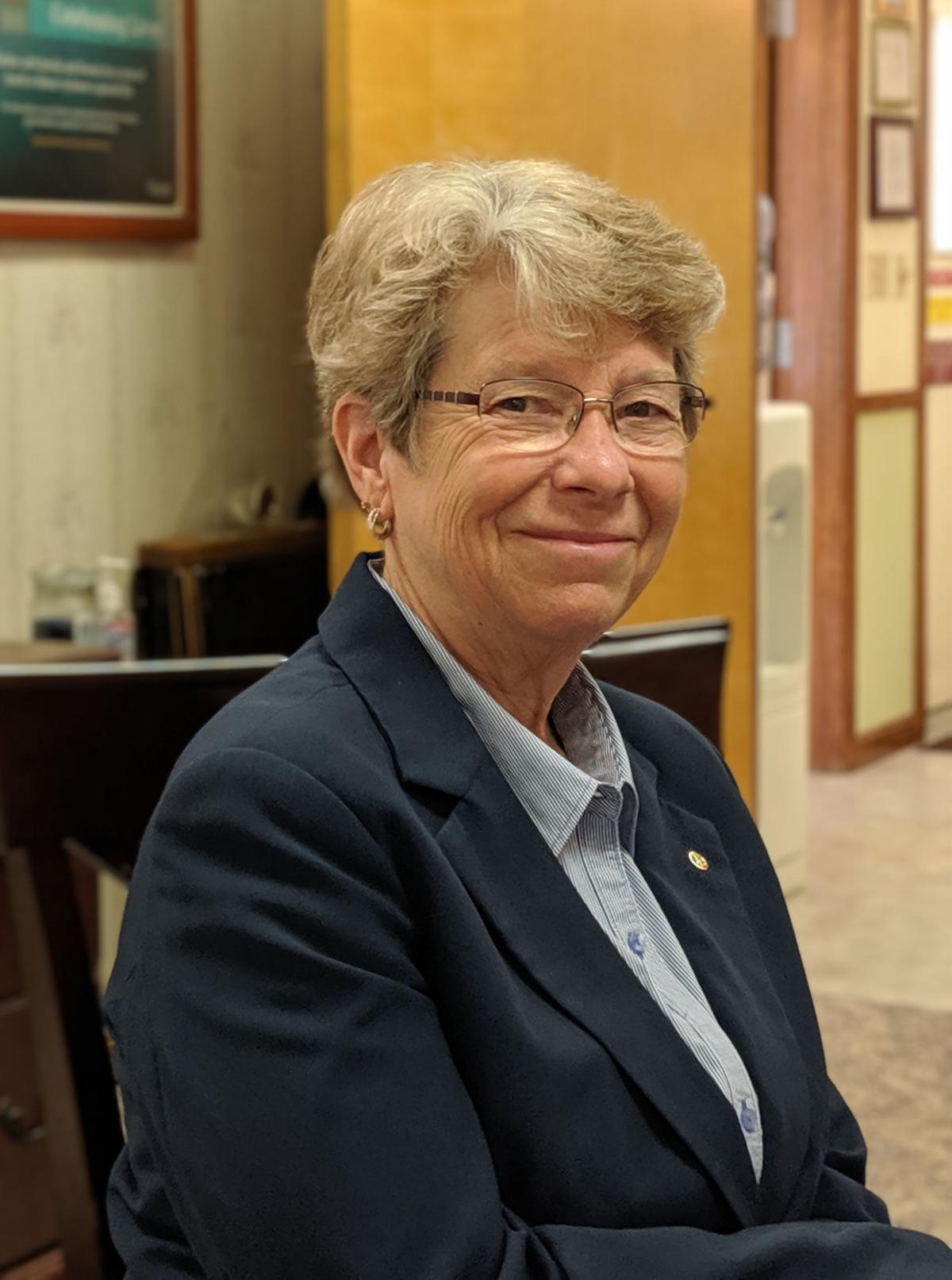 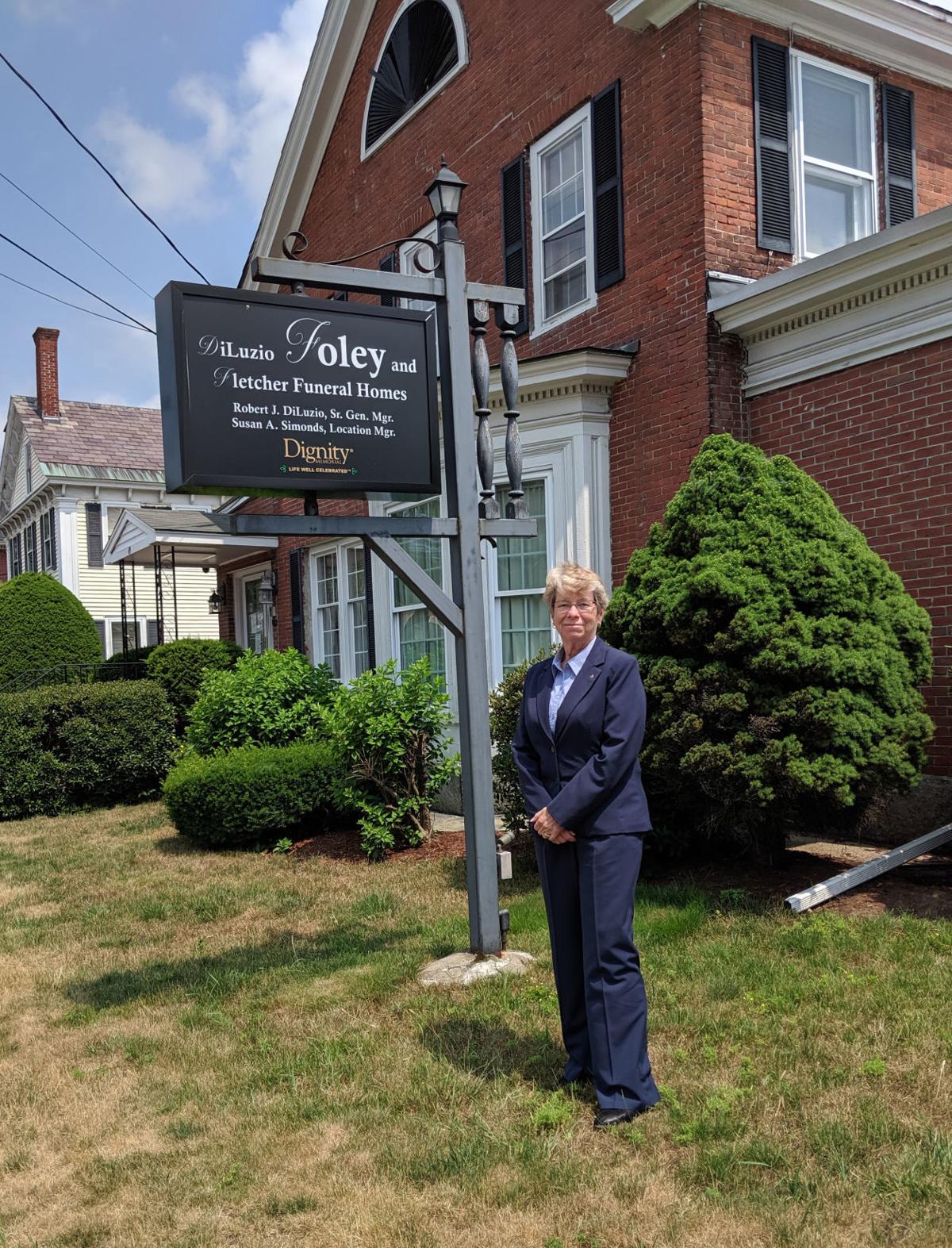 It’s a hot and humid day outside, but it’s cool within Foley Funeral Home on Court Street in Keene, the air conditioning having done its job well. Susan Simonds, the woman in charge, sits in a chair in one of the back rooms and talks about growing up in the Elm City, how she got into the mortuary field and how much the COVID-19 pandemic has changed things.

“When the virus hit, we couldn’t do anything,” she explains. “We had to create virtual arrangements. We had to set up a camera and have private viewings.” People were not allowed to gather either at the funeral home or the cemeteries, and FaceTime, Zoom and other videoconferencing technologies had to be utilized.

It was somewhat like the situation nursing homes faced, she says, where family members were unable to visit loved ones, even if they were in the final stages of life.

The restrictions have gradually eased a bit, but the virus still exerts an influence on the way funerals, wakes and memorials are planned and conducted. Like almost every other activity, COVID-19 has forced everyone to adjust and accommodate, she says.

“We as human beings will learn a lot from this experience,” she says. “And maybe one of the things we’ll realize now is what’s important in life.”

Simonds, 63, a Swanzey resident and Keene native, is funeral director and area manager of the DiLuzio Foley and Fletcher Funeral Homes in Keene, part of the Dignity Memorial funeral service providers through SCI, based out of Houston, Texas.

“In a way, I stumbled into this field,” Simonds says, “If you had told me years ago I’d be doing this, I would have laughed. But I don’t consider it a job; it’s my passion.”

She acknowledges that sometimes the role of funeral home director — once called morticians or undertakers — does carry with it a slight weight that reminds others of an unpleasant reality.

“I might meet someone, and they ask me what I do. I say I’m a funeral director, and it’s like, ‘Oh, OK,’ and then the conversation moves on.”

Her story, like those of so many here, involves a long and circuitous path. It starts with her maternal grandparents, Elizabeth and Theodore Kalb, who shortly after World War II left their native New York City because they felt it was deteriorating. They took a drive up north and just by happenstance spotted Keene. They settled in what was then known as the Luther Nourse Place on Jordan Road, built in 1773.

Jean Kalb, Simonds’ mother, met her husband, Gordon Trudelle, while the two were in school in Keene. After they married, Gordon converted the back half of the house — an old carriage shed — into their family home. Simonds, her parents, and her brother lived in that part, while her grandparents lived in the front. Simonds’ mother still lives in Keene, and her father died in 2009.

“We lived on the hill,” she says, explaining that Keene residents then understood that to mean only one thing — Jordan Road.

Simonds was born at the old Elliot Hospital on Main Street in Keene.

“I was delivered by Caesarian, on Dec. 31, one hour before midnight,” she says. “The doctor asked my mother if she wanted to have the first baby of the year, or did she want a tax deduction. She opted for the deduction.”

Simonds looks back on her formative years growing up in the city as near-idyllic. “On Friday nights, we’d park the car downtown and watch people. The best place was out front of Woolworth’s and Goodnow’s [department store]. You’d sit in the car and visit with everybody walking by.”

On Saturday evenings, the family would pack up in the car again and drive around Keene, looking at houses. “In those days, you didn’t worry about anything.” On Sunday nights, there was always a big family dinner, a tradition Simonds maintains.

An excellent athlete who played basketball, softball and tennis during her teens, Simonds recalls working with her grandfather, who did part-time work as a landscaper. “He loved being outdoors. I remember one job painting the iron fence on the Putnams’ house on Court Street. It was hard work, and I was earning money because I wanted to buy a 10-speed bike.”

After high school, she enrolled at New Hampshire Community Technical College in Claremont — now part of River Valley Community College within the state’s community college system — where she earned an associate’s degree in medical technology.

In 1976, she married Brian Simonds, who she met, ironically, at a wake at Foley Funeral Home.

“I struck up a conversation with him,” she says, and they started dating. They have two children, Christopher Simonds, a sergeant with the Keene Police Department; and Jennifer Ngah of Dunstable, Mass., a nursing supervisor at a long-term care facility.

Simonds worked at the laboratory at the Keene Clinic for eight years, then took a job at Peerless Insurance in Keene, working in the accident and health claims department. She eventually became manager of that department, supervising a staff of 23.

During that time, she became an emergency medical technician in Swanzey, where she and her husband had built — by themselves — a house in 1984.

“I had always wanted to care for people,” she says. “There were very few women EMTs in the county at the time. I might have been the second one. Sometimes the outcomes weren’t positive, but there was a lot I could do for the family.”

Unexpectedly, after 13 years with Peerless, the company did away with her department. “I had to phase out the staff, which was one of the hardest things I’ve ever had to do.” She lost her job as well.

With two kids in high school and bills to be paid, she started looking for a new job. She approached Robert DiLuzio Sr., owner of Foley Funeral Home and DiLuzio Ambulance Service in Keene, where she had done part-time work as an EMT.

She took on the role and has never looked back.

“I love it, I love dealing with all the people,” she says. “I’m not a paper-pusher. I can’t just be a desk person; I need to be around people.”

From that first job as a greeter, she then began an apprenticeship at Foley. She earned an associate’s degree in funeral service from Mount Ida College in Newton, Mass.

For 10 years, she also served on the N.H. Board of Registration of Funeral Home Directors and Embalmers.

Regardless, she says she wouldn’t trade her role for anything else.

“I take it one step at a time. When I first started my apprenticeship, one of my good friends died in a car accident,” she says. The family requested that she handle the visitation.

“I was scared. I went through the entire situation very stoically because that’s what I thought I should do. Afterwards, I broke down. Even funeral directors need to grieve,” she says.

“I have no qualms about crying with the family. I just show that I’m human like they are.”

The rewards of her job, she says, are many.

“My role is to help celebrate a life and help the family through the grief. I love people sharing stories with me about how the person lived. It doesn’t need to be all doom and gloom.”

Simonds notes that the nature of funerals is changing, one trend being that they’re shifting away from traditional church-held services, and now occurring in different venues. Also, in some cases, there is less emphasis on religious or spiritual matters. Sometimes there is no clergy involved. Sometimes there are no services at all.

She does urge people to do a bit of planning so their family knows what their wishes are, to prevent rushed and incomplete arrangements when the time comes. This might even include writing their own obituary.

It’s not easy to speak about death to people, she acknowledges, but it eventually must be faced. She’s seen much, during her varied careers as medical technician, EMT, insurance executive, and now funeral home director. And she has some advice that’s applicable to everyone, especially young people.

“Do whatever you want that makes you happy. Life is so unpredictable,” she says. “You never know what life is going to bring; tomorrow isn’t promised.”

At a glance: Susan Simonds