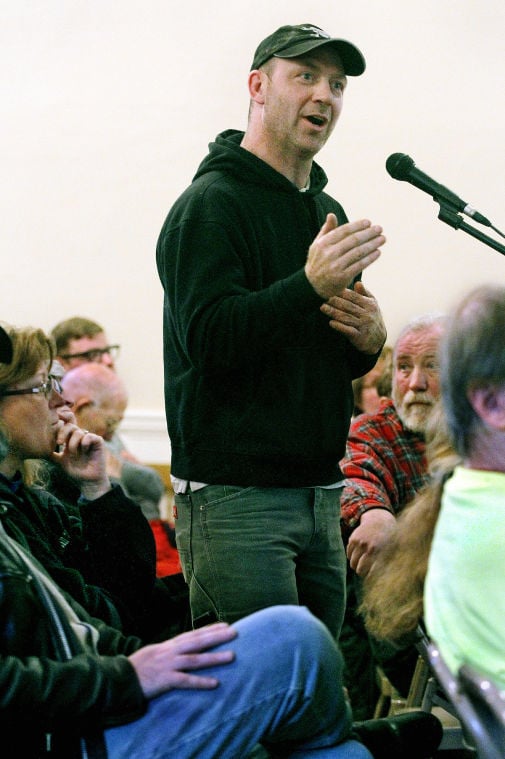 Richmond resident and potential pipeline abutter Ian Spencer tries to get a definitive answer from Kinder Morgan officials on the issue of eminent domain during a meeting Monday night. 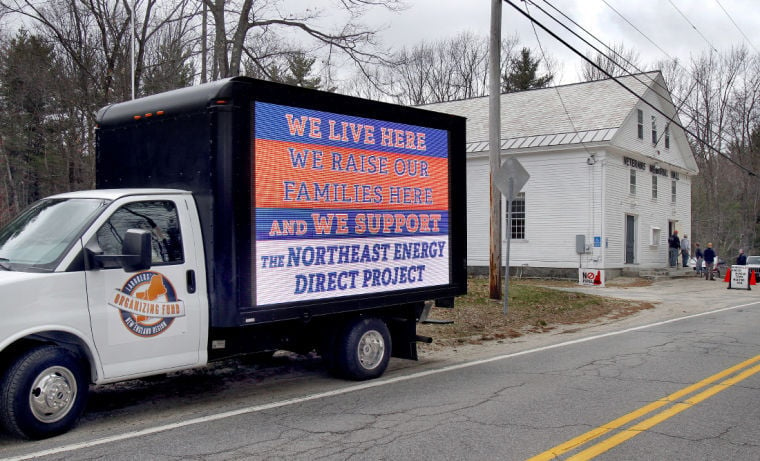 A truck with looping electronic messages in support of the proposed natural gas pipeline is parked outside Veterans Memorial Hall in Richmond during a meeting between residents and officials from Kinder Morgan on Monday night. 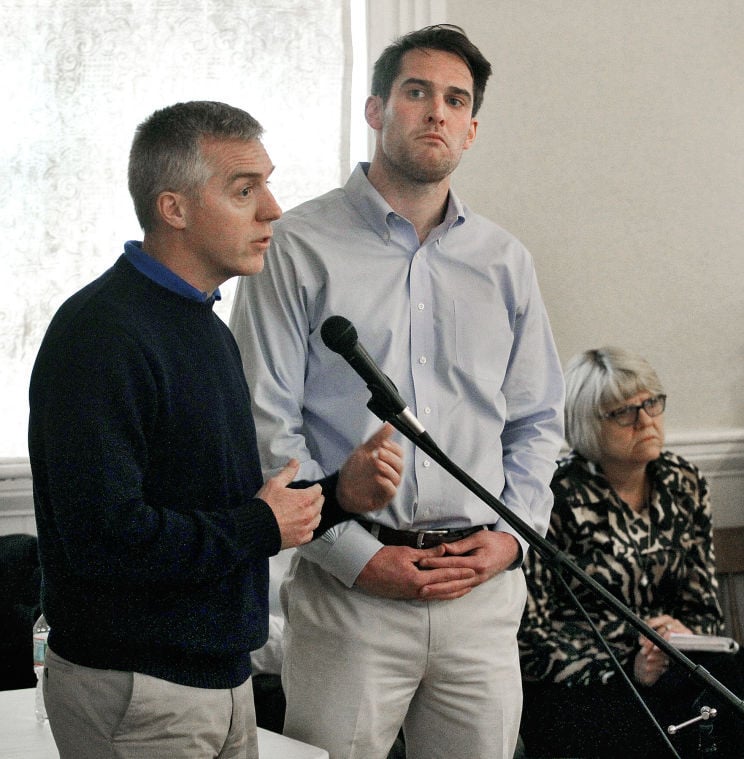 Richmond resident and potential pipeline abutter Ian Spencer tries to get a definitive answer from Kinder Morgan officials on the issue of eminent domain during a meeting Monday night.

A truck with looping electronic messages in support of the proposed natural gas pipeline is parked outside Veterans Memorial Hall in Richmond during a meeting between residents and officials from Kinder Morgan on Monday night.

RICHMOND — The astonishment and jeers came from every corner of Veterans Memorial Hall Monday night.

One woman even shouted, "Shame on you."

If the crowd of more than 100 people from Richmond and surrounding communities wasn't riled up about a proposal to put a natural gas transmission line through town before, they were after learning the thickness of the steel used for the pipe could be less than what is installed in a more populated area.

They translated that to mean they, and the environment here, are second-class.

The Tennessee Gas Pipeline Co. LLC, a Kinder Morgan company, is proposing to build a pipeline to carry natural gas from shale gas fields in Pennsylvania through upstate New York, part of northern Massachusetts and into southern New Hampshire before going to a distribution hub in eastern Massachusetts.

The question that started it all came from Chesterfield resident William P. "Bill" Manter, who told the audience that his town stands in solidarity with Richmond against the pipeline.

He then asked Kinder Morgan and Tennessee Gas Pipeline Co. officials if it was true that the thinnest stainless steel piping allowed would be used for the portion of pipeline that comes through Richmond rather than thicker piping used in a more populated place like Manchester.

"Do you value our lives less?" he asked.

He and others said they were concerned thinner steel would put them at a great risk should there be a problem with the pipeline.

In an area where more people live close together there is greater potential for a third party to damage a pipeline than in a more rural area, he said.

Steven Keady, Kinder Morgan senior consultant for public affairs, said Monday that the pipeline's width will either be 30 or 36 inches, depending on customer demand.

Kinder Morgan has operated in New Hampshire for more than 50 years, and runs 50 miles of pipeline in the state contributing $1.7 million in taxes, he said.

The proposed route of the Northeast Energy Direct pipeline through Richmond would affect 21 landowners, and bring a projected tax revenue for the town of $850,000, he said.

The project will also create 3,000 construction jobs, which would be all union-based, he said, referencing information posted on a box truck parked outside Veterans Memorial Hall along the side of Old Homestead Highway (Route 32).

Lining the road next to it were at least four signs with the words "NO PIPELINE" and the outline of the Granite State.

Selectmen Chairwoman Carol Jameson said Kinder Morgan was paying for the two Richmond police officers who were at the meeting.

Following a 15-minute presentation by Kinder Morgan and Tennessee Gas Pipeline Co. officials about the project, about 20 people, the majority Richmond residents, took to the microphone with questions and statements that filled the remaining 75 minutes of the meeting.

Many remarks from residents against the pipeline were followed by cheers and applause, including a question from student Sam Douglass of Richmond, who asked company officials why they needed to "further damage the world that my generation will one day inherit."

He has been researching the proposed pipeline and its impact for a school project, he said.

Lennon responded, saying the proposed project is to meet the demand of natural gas consumption in the Northeast Region; any discussion about using less fossil fuels and more renewable energy is a national public policy conversation, which Kinder Morgan is a part of, he said. It's also a discussion among New England's governors, legislators and people within those states, he said.

That answer was used more than once by Kinder Morgan officials Monday night.

Douglass' parents, Curtis and Debbie, also spoke at the meeting, as the family's home is on a property affected by the proposal.

Norm Woodward, 88, asked Kinder Morgan officials with help in writing a real estate advertisement for his property, which he says in the proposed pipeline's 900-foot "incineration zone." The term has been used to describe what would be immediately destroyed if the pipeline exploded.

He anticipates that at the same time the pipeline is being installed, he will likely be facing "life's inevitables."

So far the advertisement includes a well maintained salt box house and property.

"Do I not put in 'incineration zone' as full disclosure?" he asked.

Jameson politely asked him to sit down, saying his request didn't require a response. Woodward then returned to his seat.

The presentation by Kinder Morgan and Tennesee Gas Pipeline officials in Richmond was the first of two Monday night. Following the meeting in Richmond, company officials went to neighboring Fitzwilliam to speak to residents there.

At both meetings, residents also spoke about their skepticism and distrust of Kinder Morgan.

Kinder Morgan officials said they want this to be a "transparent process with all stakeholders."