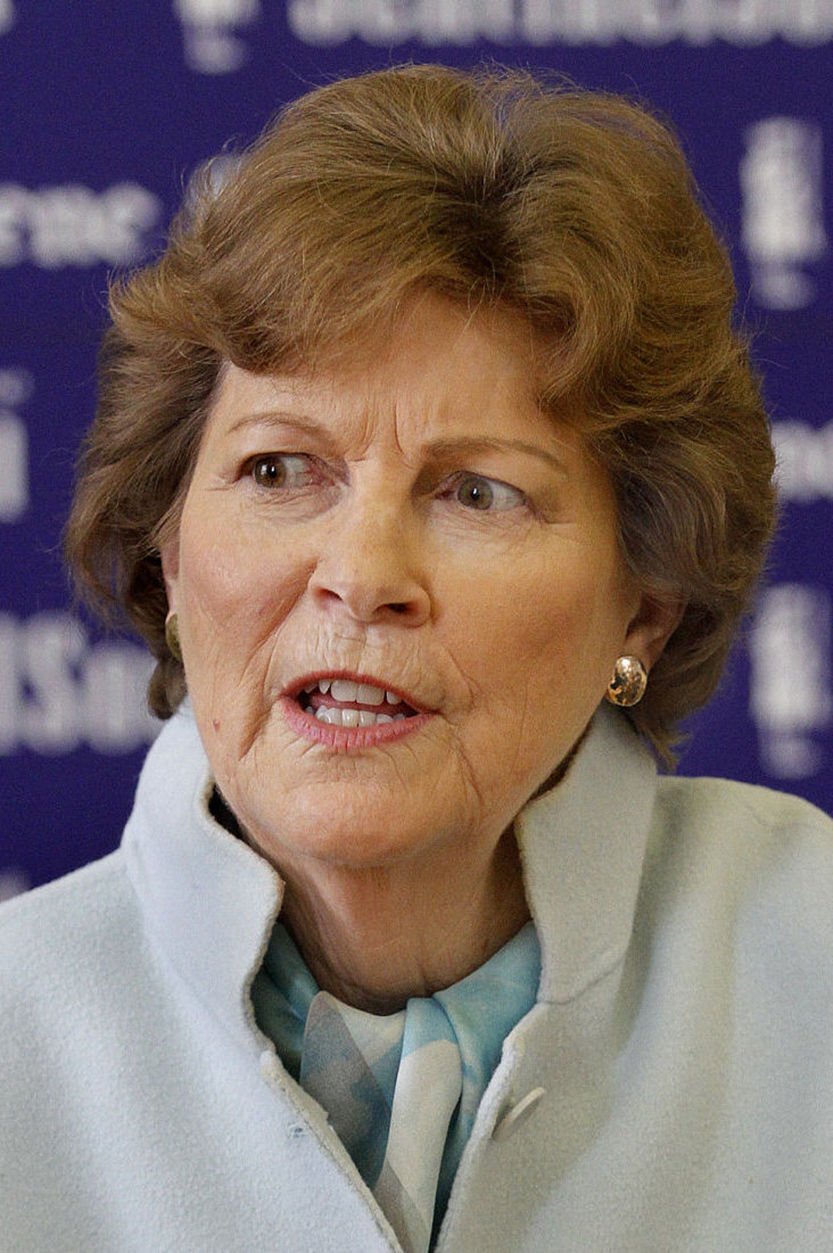 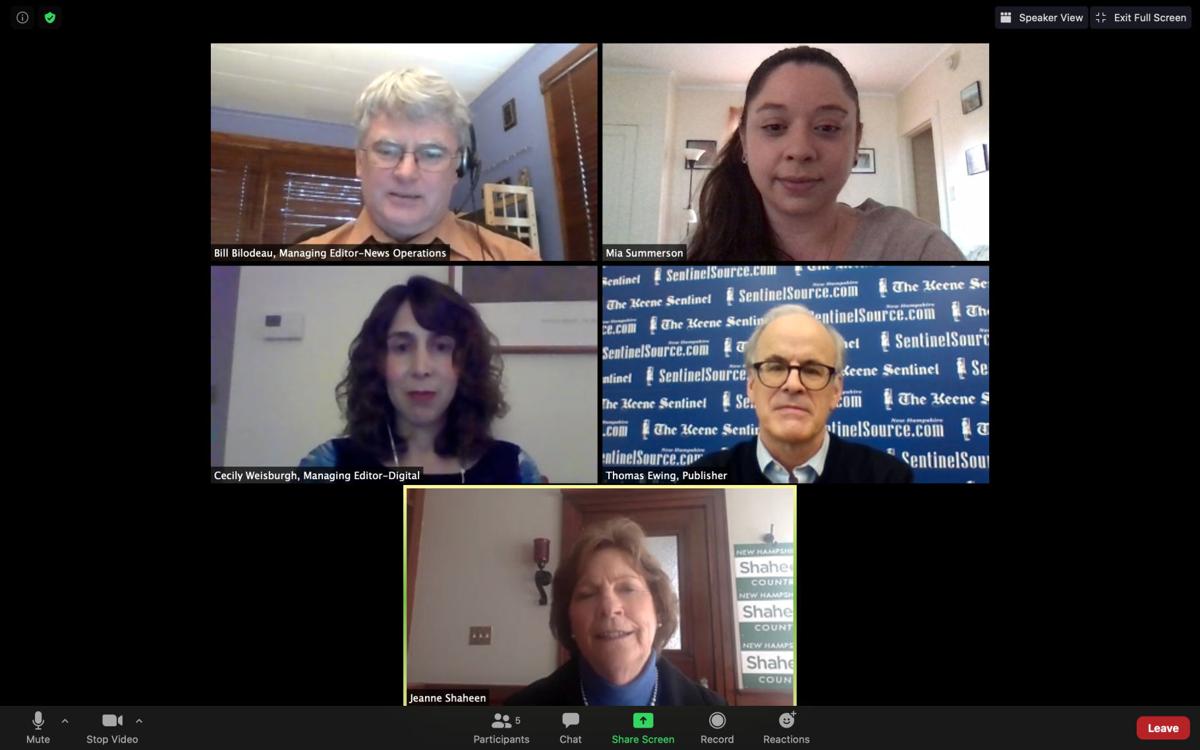 U.S. Sen. Jeanne Shaheen was heavily involved in negotiating a federal relief package in response to the COVID-19 pandemic, and if re-elected, she has a plan for the country’s return to some semblance of normalcy.

The U.S. won’t be getting back to business as usual until we “get control of this coronavirus,” Shaheen said Tuesday during a virtual meeting with The Sentinel’s editorial board. A key way to achieve that goal, she said, is to provide clear guidance on how to stem the virus’ spread.

“The most important thing we can do is have consistent messaging around what people need to do in response to the virus,” she said, noting that a lack of information has been a common complaint from constituents as she’s traveled the state in recent months.

The senator also pointed to a need for more testing and contact tracing and said she is in favor of invoking the Defense Production Act to encourage more domestic production of personal protective equipment. As for fighting the pandemic’s impact on the economy, Shaheen said she supports more funding for small businesses, targeted specifically toward companies that were unable to benefit from the first round of Paycheck Protection Program funding.

On Tuesday, President Donald Trump tweeted that he was ordering a halt to negotiations on another round of COVID relief funding until after the general election.

Shaheen, 73, a former New Hampshire governor, is a Democrat seeking her third term in the U.S. Senate. She is the first woman in the United States to serve as both a governor and a U.S. senator. She is being challenged by Republican Bryant “Corky” Messner of Wolfeboro, as well as Libertarian Justin O’Donnell of Nashua.

Prior to launching her political career, Shaheen earned a bachelor’s degree from Shippensburg University in Pennsylvania and a master’s from the University of Mississippi, according to her campaign website. She was also previously a small business owner. When she’s not in Washington, Shaheen lives in Madbury.

In addition to her plans to continue focusing on the pandemic, Shaheen said another public-health issue has her attention — the Affordable Care Act. With the U.S. Supreme Court set to hear arguments on a challenge to the ACA just a week after the Nov. 3 election, and the potential appointment of conservative judge Amy Coney Barrett to replace the late Justice Ruth Bader Ginsburg, the future of the nation’s sweeping health-care legislation is up in the air.

“The problem is there is no alternative [to the ACA],” Shaheen said. “Donald Trump keeps saying, ‘Oh, I’ve got this great plan.’ The Republican members of the Congress ... keep saying, ‘We’ve got an alternative plan; we’re going to cover pre-existing conditions.’ That’s all baloney. There is no plan. If they had a plan, we’d have seen it.”

If the ACA remains intact, she said there’s still more to be done to enhance access to affordable health care. Steps toward this could include allowing more people to buy into Medicaid and Medicare and working to lower the cost of prescription drugs by making it easier to bring generic medications to market and opening up import options.

Though the world has been focused on the COVID pandemic, Shaheen said she hasn’t forgotten about another public-health crisis affecting New Hampshire — the opioid epidemic. She said she has a three-faceted approach for addressing addiction: prevention, treatment and law enforcement to help stop opioids, particularly fentanyl, from coming into the country in the first place.

On the topic of law enforcement, Shaheen praised the work done by New Hampshire’s recently formed commission on police accountability, established earlier this year by Gov. Chris Sununu, which unanimously issued a series of recommendations aimed at preventing racial discrimination by officers.

However, she said law enforcement isn’t the only realm where improvements related to racial justice can be made, noting that the pandemic has had a disproportionate impact on people of color. Saying she believes systemic racism is a problem in America, she noted that she attended schools that were segregated and was working as a teacher in Mississippi when schools were fully integrated. She said she’s witnessed the consequences of racism firsthand.

“We need to address it,” she said. “What we had this summer, after the murder of George Floyd, was an opportunity to really begin a national dialogue about this issue, which clearly the voters want ... and to address not just the concerns about law enforcement that we saw with George Floyd, but the other challenges.”

Floyd was a Black man who died May 25 in the custody of the Minneapolis Police Department. His death sparked international outrage and inspired widespread protests, some of which became violent.

Shaheen also spoke about another pressing issue affecting public health, calling climate change an “existential threat not just to the U.S., but to the planet.” She said she is in favor of tax credits that encourage the installation of energy-efficient systems and also said supporting green energy production will create jobs.

While she said she was once a bit more hesitant about nuclear energy, she said she now believes it should remain on the table.

An interview with Sen. Jeanne Shaheen, running for re-election