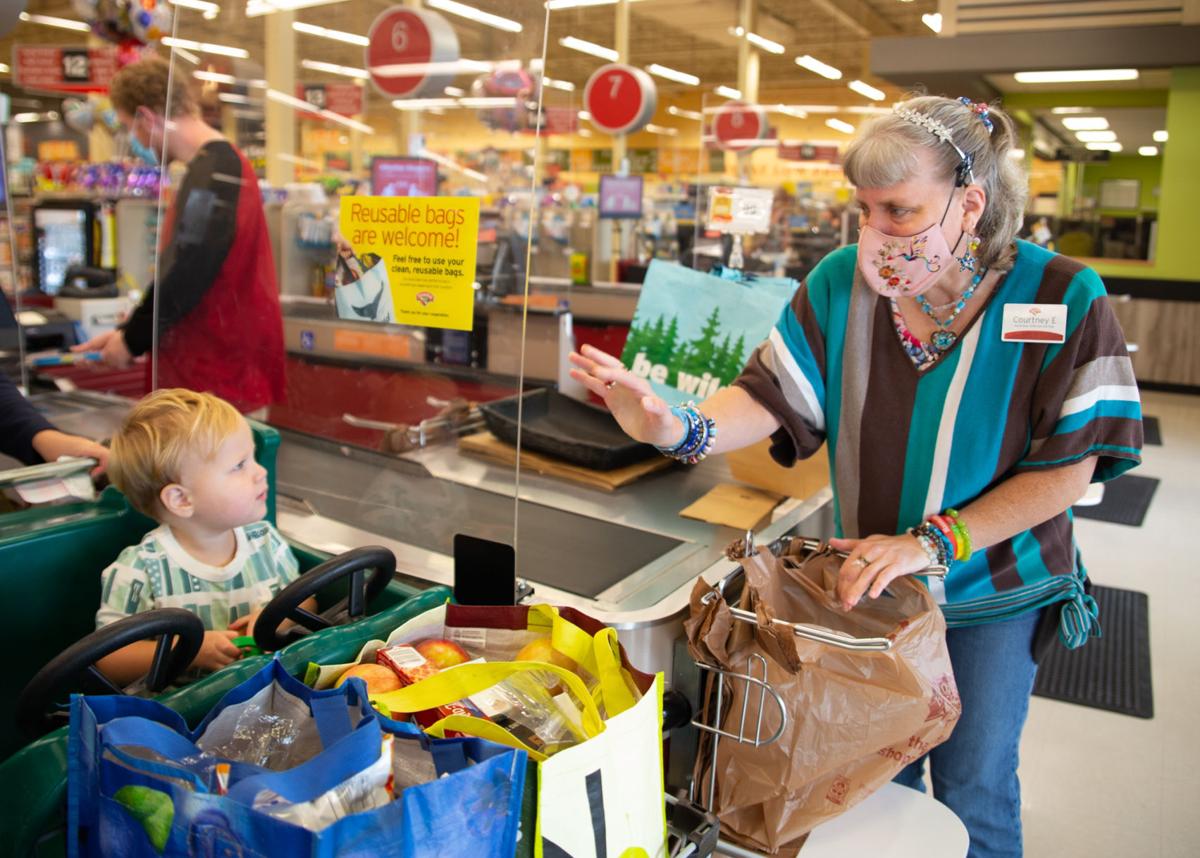 Courtney Elliott waves goodbye to Walter Denney, 1, and his mom, Molly Ellis, of Keene after packing up their groceries at Hannaford on Wednesday. Elliott greeted every customer with a smile, some while dancing and singing, making sure to tell each of them to have a good day. 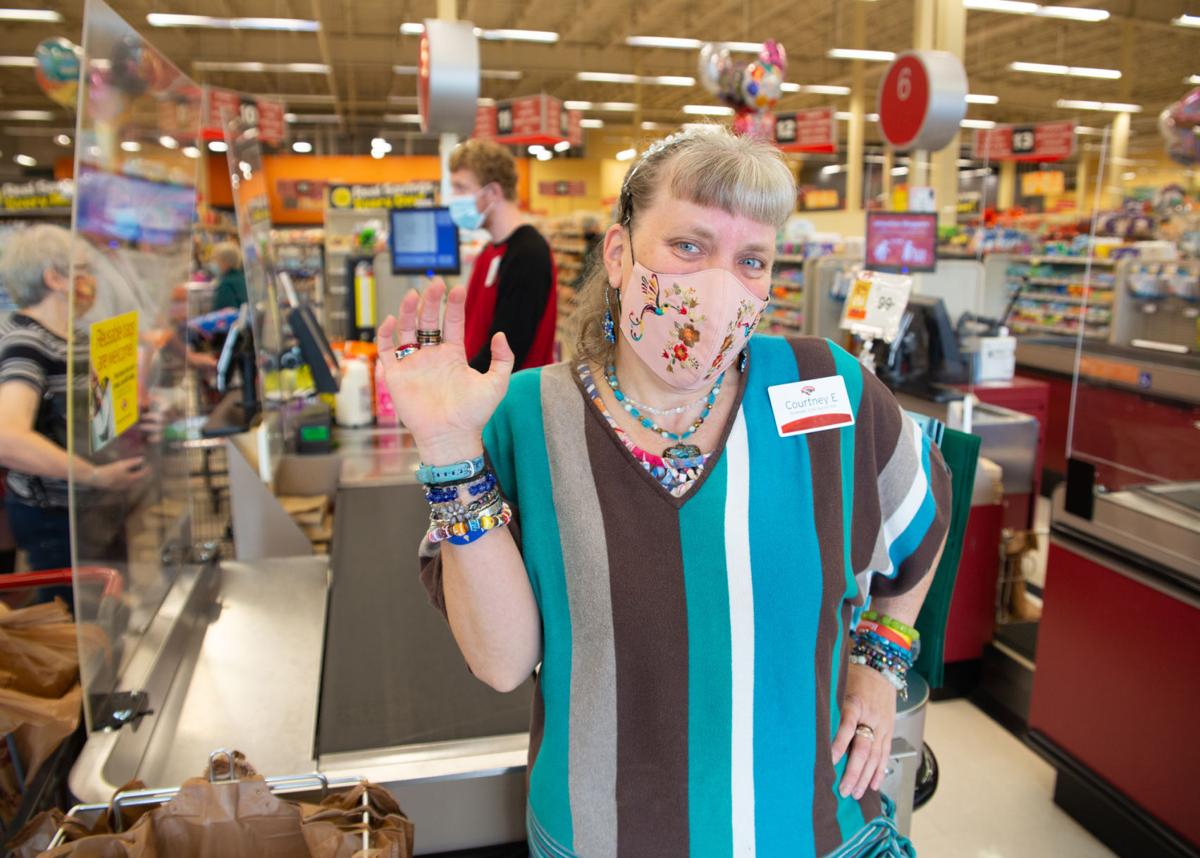 Courtney Elliott poses for a portrait before greeting a new customer in her line at work at Hannaford in Keene on Wednesday. 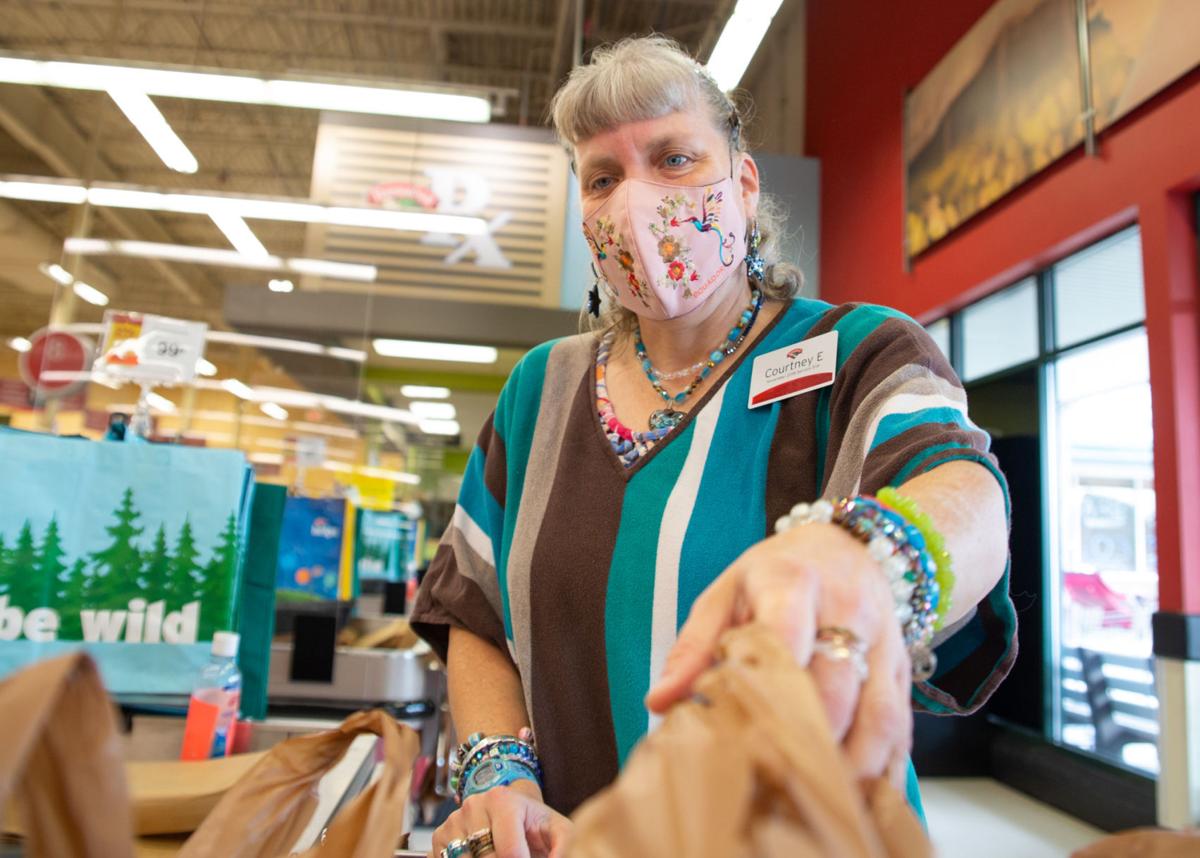 Courtney Elliott puts the last of a customer’s groceries into their cart, before telling them to have a great day, during her shift at Hannaford in Keene on Wednesday. 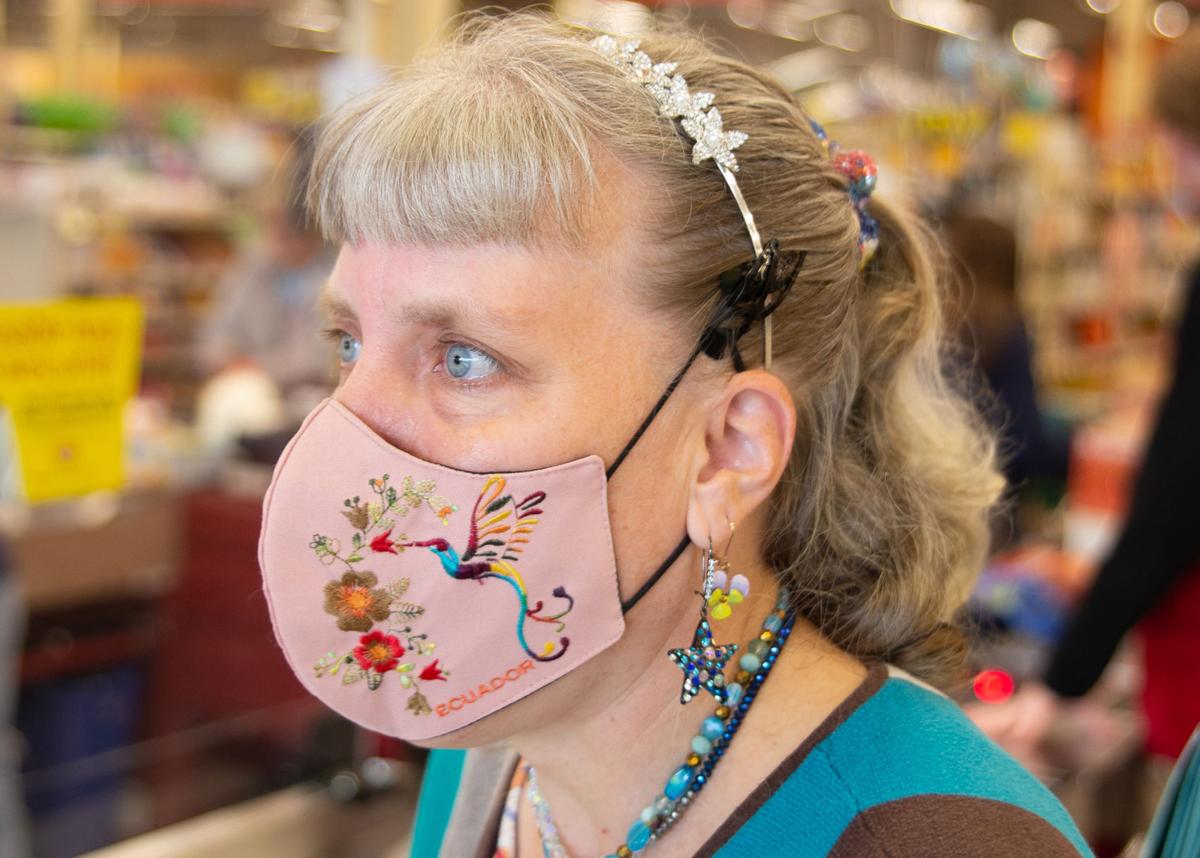 Courtney Elliott wears a mask gifted to her by her sister Tanis Elliott Jacome, who lives in Ecuador, at work Wednesday at Hannaford in Keene. 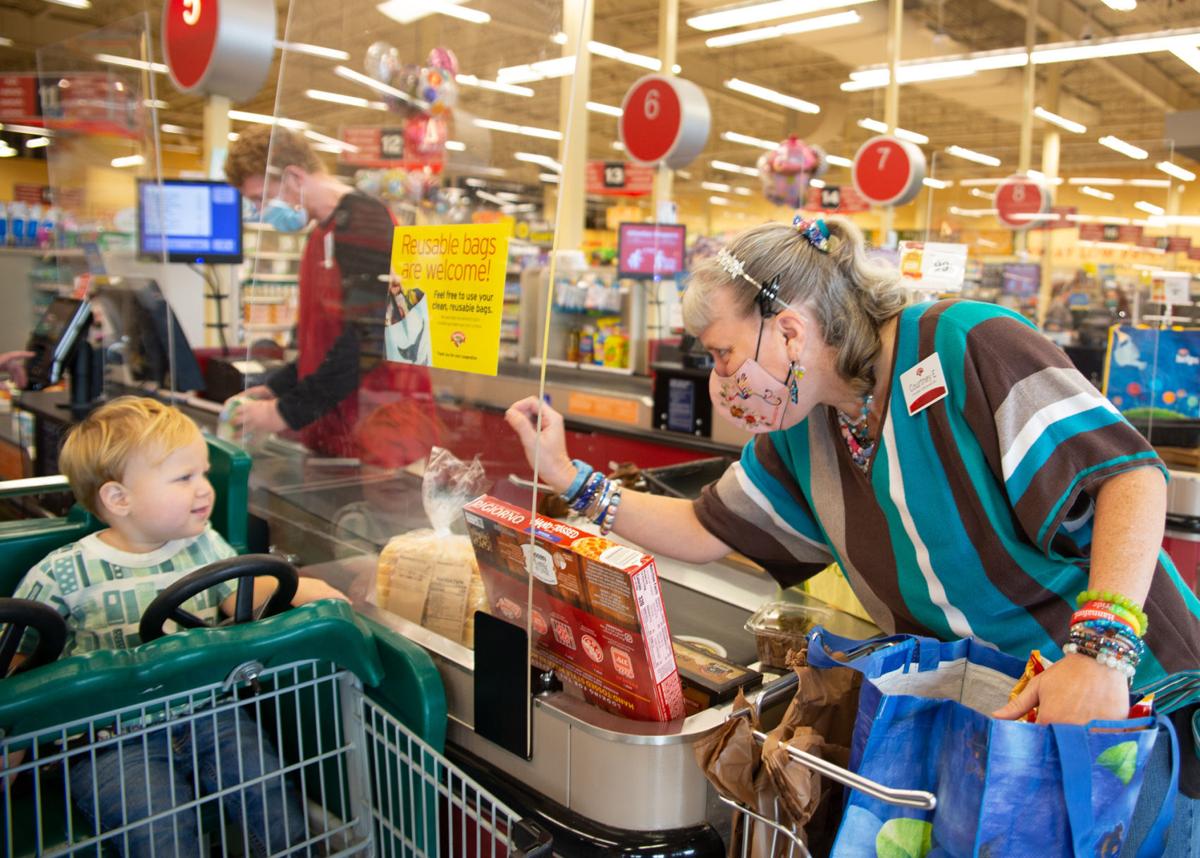 Courtney Elliott waves hello to Walter Denney, 1, of Keene while he and his mother, Molly Ellis, begin checking out at Hannaford in Keene on Wednesday.

If you’ve ever shopped at the Keene Hannaford, chances are you’ve met Courtney Elliott.

An employee for 24 years, Elliott’s sunny demeanor — complemented by her colorful, sparkly wardrobe — is contagious as she greets customers, whether they’re in her line or not.

The Keene native, who works in bagging and also collects carts, said she has a knack for recognizing faces, which makes it easier for her to remember customers’ names and create personal connections with them.

As people moved through her line Wednesday morning, many of them met her with words of affirmation.

And while many people let work get to them, Elliott doesn’t.

She said she was born happy, and that regardless of how her day is going or how busy the store gets, she always keeps a positive attitude.

“I just grew up loving people and everyone. It’s who I am,” Elliott said. “I always think of myself as a princess warrior, for strongness and loving life.”

‘I knew it was meant for me’

A graduate of Keene High School, Elliott was hired by Hannaford shortly after she completed her education in 1997, and has stayed ever since.

“I was soul searching, and once I got hired here, I knew it was meant for me,” she said.

Over the years, her position has bounced around a bit, but mostly she’s stuck with bagging and carts. On occasion, she also helps out behind the seafood counter, one of her favorite kinds of food.

“She is a role model associate, and [her] positive attitude is contagious,” he said in an email. “Not a week goes by without at least one customer telling me how Courtney made their day!”

Elliott said she’s learned a lot from her more than two decades of bagging, saying it’s like a game of Tetris to fit the items in speedily and correctly.

“My first year, I learned that cakes are fragile ... and you gotta handle them really carefully, otherwise they’ll go into a slop or mess,” she said. “And when I see glass, I like to double [bag] them so they don’t fall through.”

Mostly, when bagging, she just goes “with the rhythm” and said she does it “from my heart.”

Sometimes the job can get stressful, Elliott admitted, especially during peak business hours. Even then, she said there’s an upside, like the days going by quicker.

“I love us being busy, but it’s challenging with carts sometimes,” she said. “There’s always something [going on], but it’s fun at the same time.”

The COVID-19 pandemic has added another layer of potential stress, but it doesn’t faze Elliott, despite the frequent protocol changes for nearly two years to protect customers and staff.

Her work earned her inclusion in “Everyday Heroes,” a special section in The Sentinel in June that featured local frontline workers making a difference amid the pandemic.

“Courtney is the most friendly, and kind bagger I have ever had the pleasure to meet,” a community member who nominated her said. “I love her style: happy, colorful, and enthusiastic. If we all had just a little bit of Courtney’s spirit, the world would be a much happier place. She lifts my mood every time I see her.”

And having to don a face mask has just given her another way to express herself through fashion, Elliott said.

On Wednesday, she wore a light pink, embroidered mask from her sister, Tanis Elliott Jacome, who lives in Ecuador.

“You’ve been selected as the person with the cheeriest attitude to be found, and the best mask decorations,” one customer told her in passing.

The mask was in addition to her various bracelets — some from friends and family, others from customers — up and down each arm, along with sparkly blue star earrings, a shiny silver headband and a colorful hair piece, tying half of her hair back.

Fashion “is my signature to show everyone I love life, no matter what,” she said.

‘I just want to keep going and going’

Off the clock, Elliott fills her days with games.

Her favorites are word searches and coloring books, as well as a Harry Potter-themed video game on her phone. She also loves to sing and dance, whether it’s at home or while she’s bagging groceries.

And whether Elliott is at home with her parents, Bob and Norma, or at Hannaford assisting customers, she says she has one mission: to bring a sparkle to peoples’ day.

But work, she said, is where she feels her best, and she has no plans to leave her post any time soon.

At a glance: Courtney Elliott