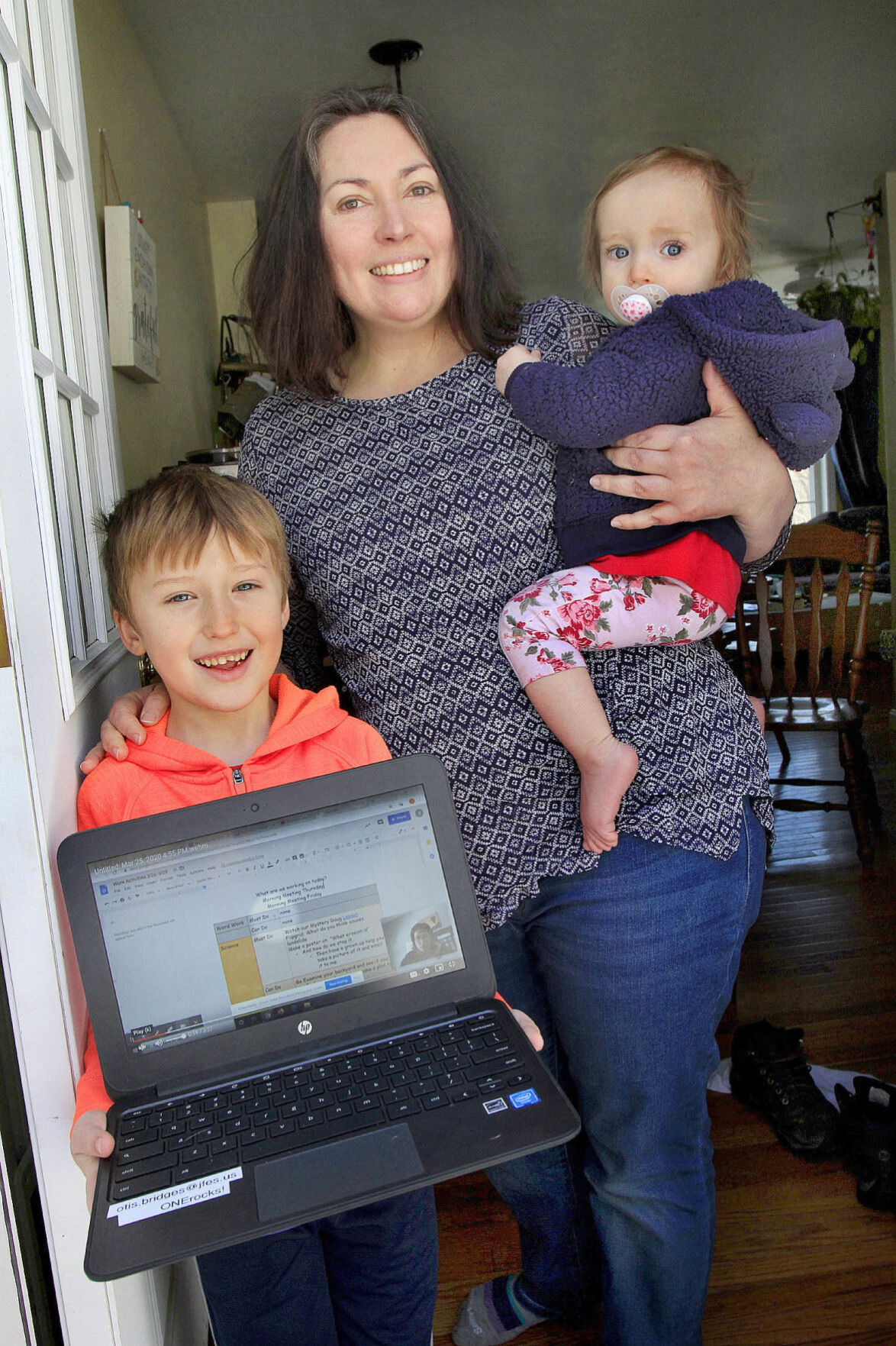 Otis Bridges, 6, a 1st-grader at James Faulkner Elementary School in Stoddard, holds the computer he is using to attend school remotely in this photo taken last March. His mother, Amanda, a 5th-grade teacher at the school, holds 14-month-old daughter, Opal. 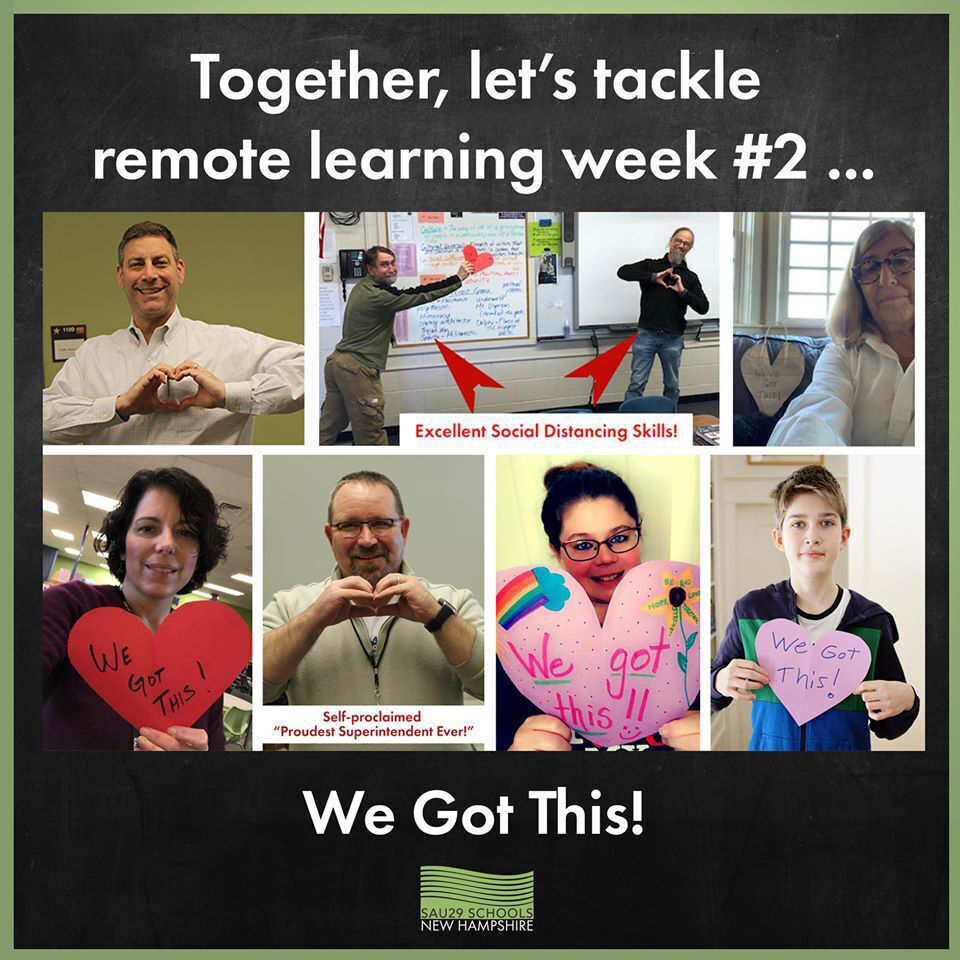 A Facebook post by N.H. School Administrative Unit 29 strikes an encouraging note early in the shift to remote learning. 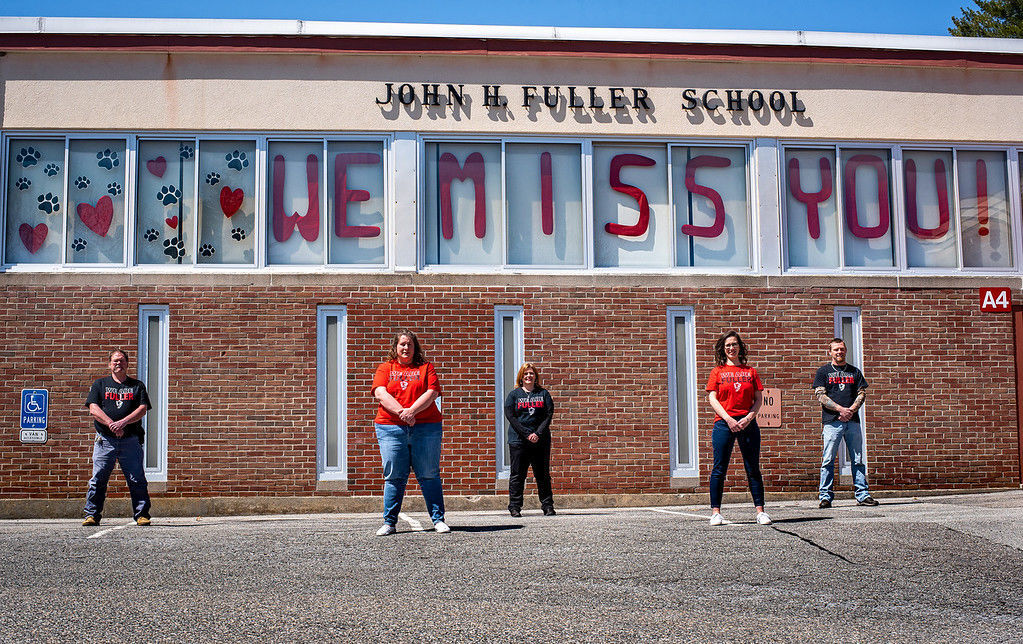 Staff of Fuller Elementary School in Keene stand under a message to students and colleagues. 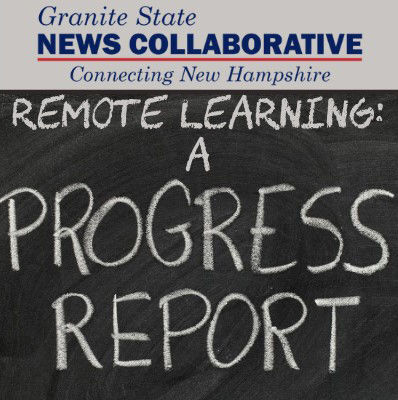 Otis Bridges, 6, a 1st-grader at James Faulkner Elementary School in Stoddard, holds the computer he is using to attend school remotely in this photo taken last March. His mother, Amanda, a 5th-grade teacher at the school, holds 14-month-old daughter, Opal.

A Facebook post by N.H. School Administrative Unit 29 strikes an encouraging note early in the shift to remote learning.

Staff of Fuller Elementary School in Keene stand under a message to students and colleagues.

Editor’s note: This story is part of a series that takes a look at how school districts across the state responded to the challenges of remote learning and plans for improvements in the fall.

Robert Malay brought a unique perspective to his job at the helm of N.H. School Administrative Unit 29 when the pandemic struck this spring. The superintendent of seven school districts in the Keene area is a New Hampshire native, but spent three years as deputy superintendent for the Guam Department of Education before returning home in 2015.

“We would get typhoons that would in some cases totally ravage the island — knock everybody out for a month or two months at a time,” Malay recalled.

Malay found himself drawing on that experience when Gov. Chris Sununu ordered all New Hampshire school buildings closed in March, first for three weeks, and ultimately for the remainder of the school year.

“When you’re in a situation that is not the norm, and it’s completely devastating to families, to homes, to individuals, we have to make sure that the family priorities are taking precedence,” Malay said. “Our business is education and in our world that is the priority.” But, he said, educators need to accept that academics, in the midst of a societal crisis, take a backseat.

“I would say that the rigor was probably equivalent,” Malay said of the districts’ remote-learning programs, but that their scope was limited. “Our teachers went as deep as they would have and in some cases even deeper, but might not have gone as wide as they would have [in the classroom].”

In the case of last spring’s quick pivot to remote instruction, schools also had to figure out how to adapt teaching methods for students with special needs, reach English language learners, connect families to technology, track attendance, monitor learning and see to students’ wellbeing — all without seeing them face-to-face.

And this crisis isn’t a typhoon with a finite end, beginning and recovery. New Hampshire has reported one of the lowest incident rates in the country to date, but still the coronavirus pandemic persists. In late July, the average number of reported cases per day increased by 25 percent over the average from two weeks earlier.

In keeping with New Hampshire’s tradition of local control over education, Gov. Sununu’s “Back-to-School Guidance” issues no mandates, but allows districts to make their own decisions about whether and how to reopen school buildings in the fall.

By way of comparison, in neighboring Massachusetts, the Department of Education is requiring schools to prepare for three possible scenarios: in-person learning with new safety requirements, a hybrid of in-person and remote learning, and continued full-time remote instruction.

As challenging as remote learning was last spring, many districts are including it in the plans they’re announcing now — whether full-time out of concern that they won’t be able to afford the precautions required to open safely, as part of a hybrid model to help accommodate social-distancing recommendations, or as a back-up plan in the event that a spike in the virus prompts another round of stay-at-home orders.

There is broad consensus among superintendents, principals, teachers, parents and professionals that everyone did their best with remote learning last spring. But to the extent that it’s utilized in the 2020-21 school year, a crucial question emerges: Is last spring’s best good enough for the future?

“In my eyes, no,” said Julie King, superintendent of Berlin Public Schools. “And I would say that my staff would echo that.”

By early May, King proposed ending the school year a week before its scheduled close.

“We were able to meet our instructional hours requirement, and our feeling was that at that point, we were just all wiped out,” King said. “We needed some time to collect Chromebooks and re-gather ourselves and spend time with staff reflecting on how remote learning went.”

Berlin was not alone. No comprehensive statewide data exist to track the varied responses to remote learning across New Hampshire school districts, but news reports indicate that about a dozen ended the school year ahead of schedule. And although remote learning revealed some pleasant surprises about students who performed better outside of the brick-and-mortar atmosphere, there is no question that it left others behind.

“We see achievement gaps when students return every fall. Some students retain most of what they learned the year before, and some lose more of that knowledge,” Education Commissioner Frank Edelblut said in a July news release. “Given the disruption to student education this spring, students will return to school with much more variation in their content knowledge.”

“New Hampshire’s Remote Learning Progress Report” is a series that examines what schools learned from last spring’s experience, and how they can learn from each other to improve remote instruction going forward.

For this project, the Granite State News Collaborative analyzed 10 metrics of education-related, socio-economic and technological data to identify towns, schools and districts that comprise a wide spectrum of realities in New Hampshire.

Towns and districts were chosen to be featured based on metrics relevant to each topic. All efforts were made to include locations that represented both the upper and lower ends of each spectrum — not in order to draw comparisons between disparate places, but with the goal of showing a full range of circumstances in which education is delivered in New Hampshire.

As of March 15, 2020, when Sununu signed an emergency order requiring all public schools to temporarily transition to remote learning, a state survey asked SAUs how ready they were for the switch. Of the 117 administrators who responded, only one, from Pinkerton Academy, reported being fully prepared.

Nine more SAUs reported that they were currently implementing remote instruction “with limited challenges” — although data released from the state DOE through a public information request indicates their remote learning “start dates” were either unreported, or followed both the governor’s emergency order and the reported date of the survey.

Another 26 SAUs were rolling out remote-learning models for the first time, and 36 thought it would be possible to implement within a month. In Nashua, administrators were less optimistic: It was the sole district that reported no capacity to conduct remote learning within the school year. Twenty-eight SAUs did not respond.

They had little choice: The coronavirus pandemic was here. On March 26, Sununu issued New Hampshire’s stay-at-home order. By April 16, he had declared that school buildings would remain closed for the remainder of the school year.

Reflection and learning from that emergency switch to remote instruction is easier said than done. The state quickly created an online clearinghouse of resources to assist educators, families and students with the new paradigm, but decisions about how to shape online learning, and what to expect from students and teachers, were left to individual schools.

No two schools or districts in New Hampshire are exactly alike. This is partly because of the state’s tradition of local control over education. Within certain parameters, school districts are free to teach in whatever way they feel best fits their communities. Also, some communities in New Hampshire share certain characteristics, while others are worlds apart.

This distinctiveness presents a challenge for group problem-solving across districts: The full-day, real-time online learning achieved in the 68-student, single-school district of the Jennie D. Blake Elementary School in Hill, for example, may not be possible in a place like Manchester, with one of the state’s highest rates of homeless students.

The data analysis reveals striking geographical differences in the challenges school districts face and the financial resources at their disposal to cope with them. The stories detail those challenges and differences, and also illustrate resilience and ingenuity in response.

Take, for example, the “Digital Distress Indicator,” provided courtesy of The Center for Internet as Infrastructure, LLC. Used to identify locations to feature in the story about technology, this is a calculation derived from census data on cellphone plans and Internet subscriptions, as well as access to mobile phones and computers. It may not be surprising that digital distress is concentrated predominantly in the northern, more rural parts of the state.

But rural locales are not the only ones with a high degree of digital distress: The data also point to the cities and suburbs of Allenstown and Manchester in the Merrimack Valley, Milton in the Lakes Region, and Rochester and Somersworth in the Seacoast as among the least connected cities in the state. And in Berlin — an area of high digital distress — Superintendent King said her schools “had a leg up” on remote learning because they had achieved a 1:1 ratio of students with devices several years ago.

Students with special-education needs attend school in every district and region, and providing for those needs proved a particular challenge for remote instruction. But teachers and administrators quickly ramped up existing networks for sharing and professional development to trade notes on ways they were finding to help their students.

That type of network wasn’t already in place for teachers of English language learners, a population concentrated in the Merrimack Valley and Seacoast. But the DOE initiated a weekly statewide conference call for ELL teachers to share tips and translation tools. This created a way for teachers in low-incidence districts, such as Claremont, to learn from peers with more experience and resources, such as Nashua and Manchester.

Student-teacher ratios were evaluated to select schools for the feature on instructional models — reporting that showed larger districts, though they may have access to more resources, struggled to provide the one-on-one attention needed to keep students engaged. District-wide proficiency scores were used to guide the reporting on progress monitoring, or how teachers evaluated students’ learning at a distance.

A combination of dropout rates, graduation rates and attendance rates was analyzed to identify schools for the story about how students’ learning time was tracked. The same analysis guided reporting on what emerged as educators’ biggest concern throughout the pandemic: attending to students’ wellness.

Most of the interviews conducted for this series were with school administrators — the ones making decisions about instructional models for their districts, with additional input from teachers, parents and professionals from educational organizations. Due to the emphasis on local control over education in New Hampshire, limited input was sought from state officials.

It was notable in the reporting that many educators expressed reservations about being interviewed on the record, or outright declined. This could be related to worries about student privacy, but several sources cited policy concerns about consequences from their schools’ administration if some of their struggles with remote learning were revealed.

The educators who did share their stories paint a portrait of a diverse and dedicated workforce, committed to learning from their mistakes and helping one another do their best, and innovate where they can, in these challenging times.

This article is being shared by The Granite State News Collaborative. For more information, visit collaborativenh.org.