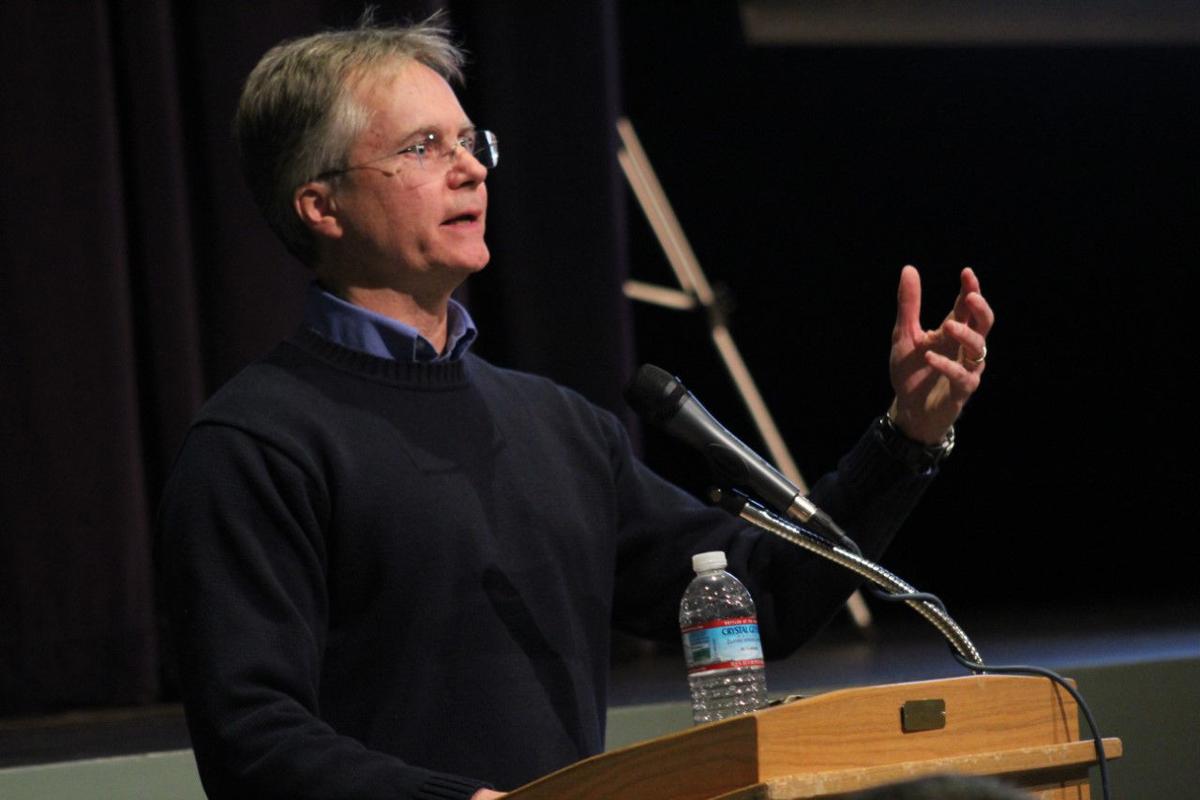 Jim Carley, chairman of the Keene Board of Education’s facilities committee, lays out the board’s proposed budget to community members in the Keene High School auditorium Tuesday night. 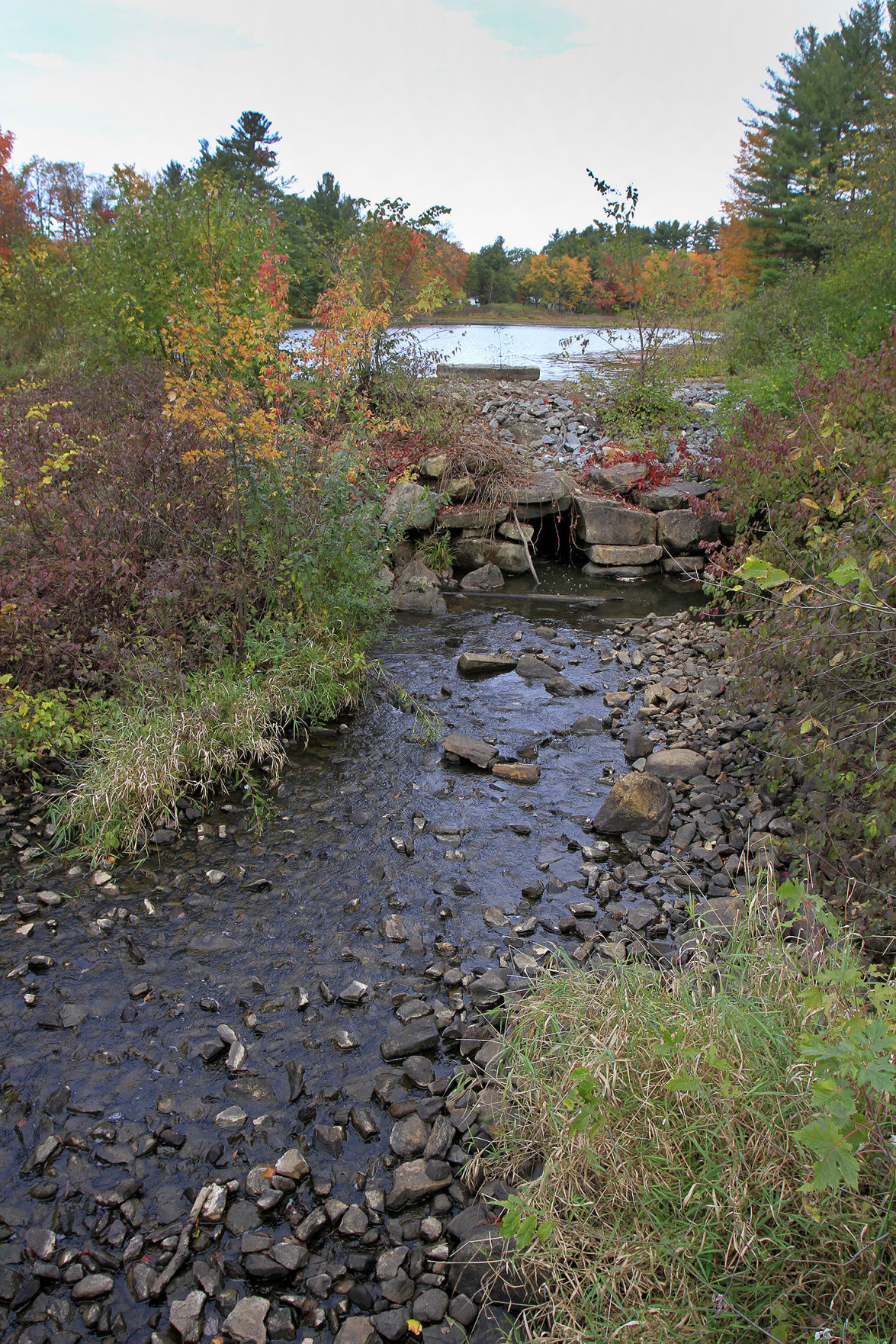 The Wilson Pond Dam was a hot topic Tuesday. 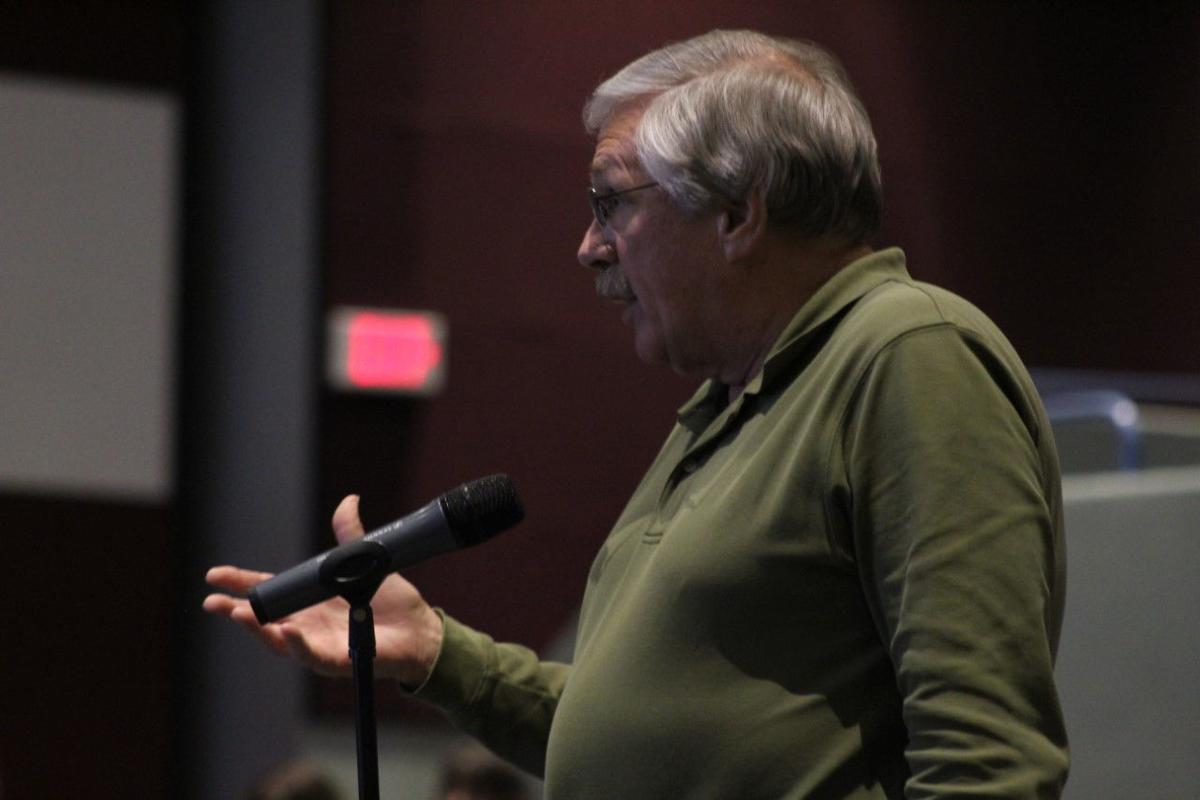 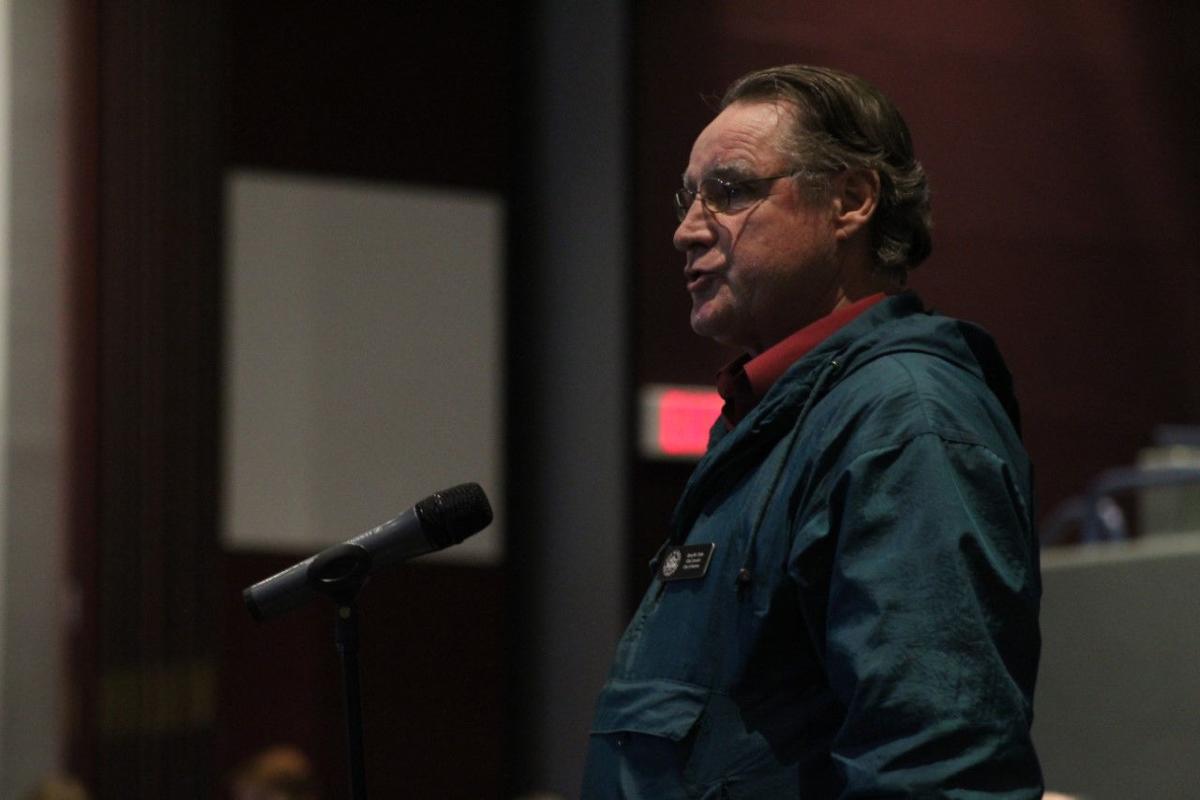 Ward 3 Keene City Councilor Terry M. Clark addresses members of the Keene Board of Education Tuesday night about the board’s plans for Wilson Pond Dam as part of its proposed 2020-21 budget. 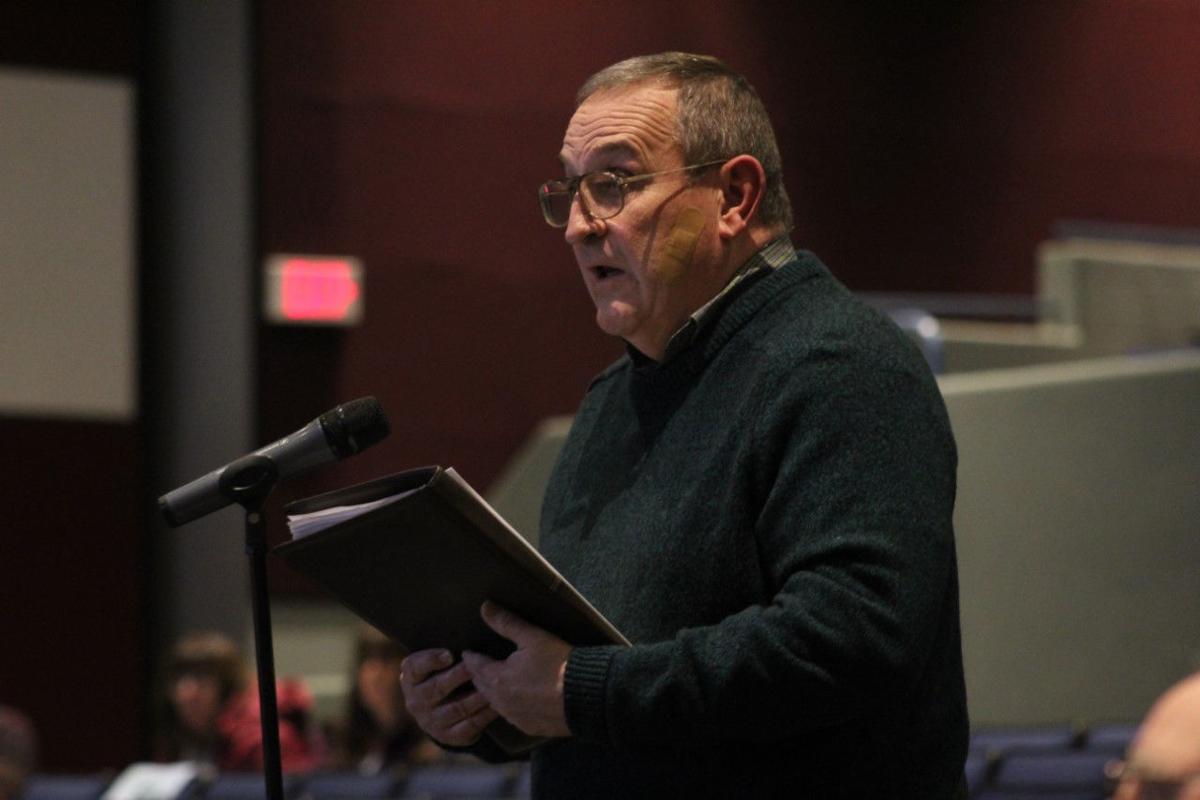 Jim Carley, chairman of the Keene Board of Education’s facilities committee, lays out the board’s proposed budget to community members in the Keene High School auditorium Tuesday night.

The Wilson Pond Dam was a hot topic Tuesday.

Ward 3 Keene City Councilor Terry M. Clark addresses members of the Keene Board of Education Tuesday night about the board’s plans for Wilson Pond Dam as part of its proposed 2020-21 budget.

The future of the Wilson Pond Dam behind Keene High School was the main focus among those who gathered Tuesday night for the Keene Board of Education’s public hearing on its proposed 2020-21 budget.

The board voted in October to add $450,000 to its operating budget proposal to rehabilitate the eroding dam, contingent on someone agreeing to take ownership — and future responsibility for the structure — after the repairs are done.

But with no agreement struck before the board’s pre-determined deadline of Jan. 3, members voted Saturday to allocate $250,000 for the dam’s removal instead.

“We have no desire to maintain the liability of that dam,” said Jim Carley, chairman of the board’s facilities committee, at Tuesday’s hearing at Keene High. “This is not something that an educational entity should be spending $25 on, let alone $250,000 to $450,000.”

Carley noted that there is still time for a third party to take ownership of the dam. If that happens, he said the district could tap into other resources to make up for the additional $200,000 not budgeted for repairs.

Still, a handful of community members wanted the dam to stay put. Longtime Keene resident Jim Phippard, whose Arch Street home overlooks the dam, said getting rid of it would significantly lower his property’s value.

“I’m assessed an additional $20,000 a year in property value because I have frontage on the pond,” he said.

Former Keene mayor Kendall W. Lane mentioned the lengthy process the district would need to go through to remove the dam.

“This is not something where time is of the essence. It’s not something that’s going to happen overnight,” he said. “I’m not sure why that money was taken out because you’re looking at a two- to three-year process before any action gets taken to remove that dam.”

The dam, according to previous state inspections, is in very poor condition and leaking in several places.

After Tuesday’s hearing, N.H. School Administrative Unit 29 Chief Financial Officer Tim Ruehr said that in its current condition, the dam will fail its next inspection, and officials are trying to plan ahead.

Another line item some residents voiced concern about in the proposed $68,865,207 budget was what they considered inadequate funding allotted for repairs to Keene High School’s track.

During Saturday’s vote, the board reduced those funds by $60,000, leaving $290,000 for the project. The board learned the vendor could use a three-eighths-inch surface material to repair it — rather than half an inch like Keene Middle School’s track — and opted to budget for the alternative due to cost.

Finance Committee Chairwoman Dawn Mutuski told The Sentinel this past weekend the change in thickness wouldn’t diminish the track’s safety.

But former board member Ed Murdough called the track “a disgrace” and said it needs to be addressed.

He suggested putting together a $5 million project, paid for through a 10-year municipal bond, to revamp all of Alumni Field, instead of just the track.

“I believe it’s a much better use of community resources with a much bigger bang for your buck, much bigger benefit, than putting a Band-Aid on a track that, even after it’s fixed, will not be suitable for competition,” he said.

Aside from the reductions for the dam and track projects, other budget proposal cuts the board approved Saturday include trimming $100,000 from the buildings maintenance department, which had planned to use $120,000 for door security keycard upgrades.

Mutuski told The Sentinel that correcting a budget error pertaining to furniture and fixtures at the Cheshire Career Center removed another $3,700 from the proposal.

The budget still includes money for an additional $1.1 million in special education costs, as well as funding for a district-wide workplace safety position and a behavioral interventionist at the middle school — a position that already exists at the district’s elementary schools.

The budget figure doesn’t include the costs of any new employment contracts, which are voted on separately. If those contracts are approved, the costs are added to the 2020-21 operating budget and incorporated into the budget in following years.

The contracts voters will consider:

The Keene Educational Office Personnel Group (21 clerical and administrative support employees). The costs for pay and benefit increases the first year of the four-year contract are $32,268, with a four-year total increase of $296,194.

The Keene Clinical Service Providers (10 speech-language pathologists and six school psychologists). The costs for pay and benefit increases in the first year of the contract are $43,434, with a four-year total increase of $448,820.

The Keene Custodians (28 custodians, three grounds workers, four trades people and a utility person). The costs for pay and benefit increases in the first year are $51,431, with a four-year total increase of $502,707.

After the school board and the Association of Keene Tutors did not reach a contract agreement, voters will be asked to raise $339,938 for the costs of pay and benefit increases in the first year of a four-year contract recommended by a fact-finder.

Voters can discuss and amend the budget proposal and other warrant articles at deliberative session, slated for Feb. 8 at 9 a.m. in Keene High’s auditorium. Elections will be held March 10.

This article has been altered to correct information pertaining to the Association of Keene Tutors.