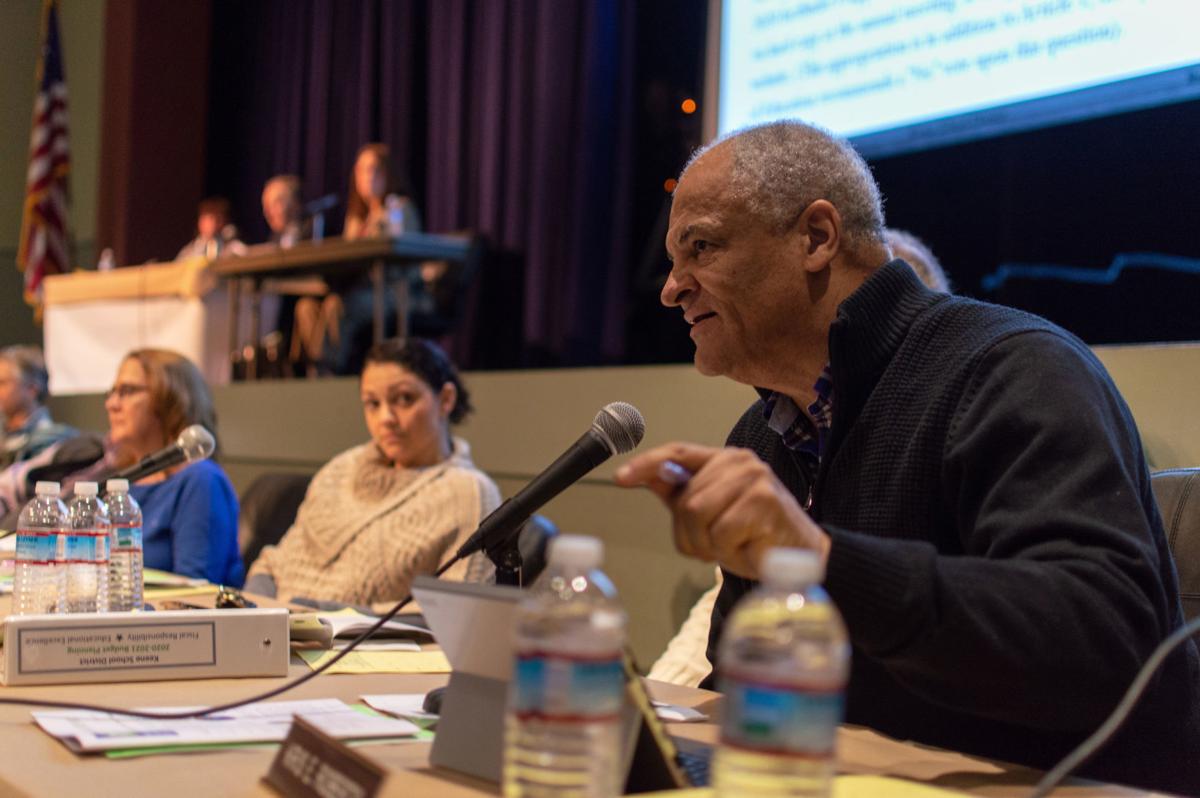 Keene Board of Education member Kris Roberts speaks to an article that would increase salaries and benefits for tutors, which came about after a contract dispute between the board and the Association of Keene Tutors. The school board doesn’t recommend the article, which garnered lengthy discussion at Saturday’s deliberative session. 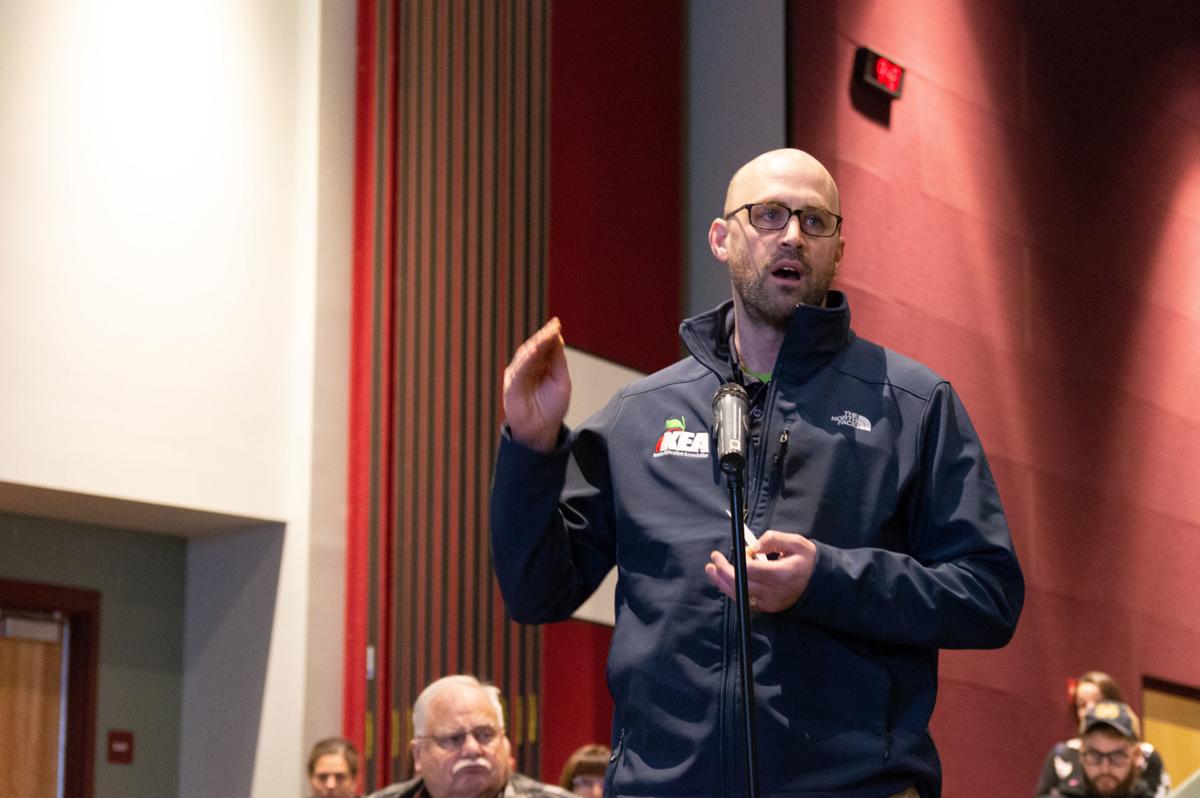 At the Keene School District’s deliberative session Saturday, Keene Education Association President William Gillard urges voters to support tutors and vote in favor of an article that would raise their salaries and benefits.

Keene Board of Education member Kris Roberts speaks to an article that would increase salaries and benefits for tutors, which came about after a contract dispute between the board and the Association of Keene Tutors. The school board doesn’t recommend the article, which garnered lengthy discussion at Saturday’s deliberative session.

At the Keene School District’s deliberative session Saturday, Keene Education Association President William Gillard urges voters to support tutors and vote in favor of an article that would raise their salaries and benefits.

Voters at the Keene School District’s deliberative session Saturday morning expressed dismay at the school board’s opposition to a proposal that would increase pay and benefits for tutors.

They passed nearly all of the warrant articles onto the March ballot unchanged, aside from a slight increase to the operating budget.

The tutors’ warrant article comes more than a year after the board and the Association of Keene Tutors reached a stalemate, rather than a new contract.

The district employs about 100 tutors who offer direct support to special education students as outlined in their individualized education program, or IEP, according to a union handout from the meeting.

The warrant article would raise $339,938 in taxes to cover wage and benefit increases in the first year of the contract, which includes retroactive pay to when the previous contract expired on June 30. By the end of the four-year agreement, tutors would also get one personal day (which could be rolled over and accumulated for up to three in one year), two additional holidays, more tuition reimbursement for continuing education, and a slight increase in sick day accrual.

The cumulative cost of salary and benefit increases in the proposed contract, which would last through June 2023, is estimated at $1,792,233.

Negotiations between the school board and the Association of Keene Tutors first stalled last January, when the union rejected 3-percent annual pay increases. The association’s president, Kathy Twombly, told The Sentinel then that the proposed raises were an average, not a 3-percent bump across the board, and that they weren’t competitive enough to keep tutors in the district.

Keene tutors have since been working under an agreement that was approved by voters five years ago and expired last June.

After the two sides found no consensus, they turned to a fact-finder, a neutral third party who steps in during labor disputes. On Jan. 4, the fact-finder issued a 76-page report with recommendations, which drove the article on this year’s warrant.

The association asserts in the report that the average tutor wage of $13.29 an hour is more than a dollar below the lowest custodian wage. Such low pay is to blame for Keene’s high turnover and vacancy rates of tutors, the union argues, especially when most nearby districts offer benefits and better wages.

The school board alleges in the report that the cost of the union’s proposal would be “intolerable to the voters,” and considered its 3-percent offer generous relative to the national average raise for education employees, which is 2.4 percent.

But Michael C. Ryan, the fact-finder, says in his recommendation that he isn’t convinced “that the District cannot afford such a wage increase nor that the voters would reject it.” He acknowledges that the “strikingly high turnover rate of Tutors is undisputed” and includes testimony from teachers, as well as a former tutor who left the district because of the low pay.

Seventy-one registered voters attended Saturday morning’s session — a dismal turnout for a city with approximately 19,000 registered voters — and several spoke in favor of the proposed agreement with the tutors union.

State Rep. William Pearson, D-Keene, said people can send messages through their vote of what their community values.

“I think education is one of those values that Keene should come out strongly for,” he said.

Other voters called it shocking and wrong for the board to put its recommendation against the article on the warrant, though the district’s attorney, John Wrigley, explained that’s required by state law.

When Twombly, the tutor union’s president, told the board members they “should be ashamed” of themselves, Moderator Kathleen O’Donnell interrupted and instructed her and other speakers to be respectful.

William Gillard, president of the Keene Education Association, which represents the district’s teachers, pointed out the legal costs that stack up on both sides when negotiations are unsuccessful. He also noted, as the tutors’ union has, that there are typically around two dozen tutor vacancies in the district because the wages aren’t competitive.

“First and foremost, this could have all been settled during the negotiating process if the board had been more reasonable,” Gillard said.

Board member Kris Roberts’ hand shot up after Gillard’s remark, indicating to the moderator his urgent intent to speak. During his turn at the mic, he underscored the need for qualified people in the positions and not just “babysitters,” implying the vacancies are due to a lack of adequate applicants, rather than the pay.

Since that was the last article on the warrant and voters can’t amend proposed union contracts, the meeting wrapped up once everyone had said their piece.

The operating budget was the only item changed Saturday morning. Marie Duggan made a motion to add $10,000, which she said she’d like to see used for Keene Middle School’s Gifted and Talented Program.

The operating budget figure doesn’t include separate spending measures, such as the cost to approve the Keene tutors agreement or the other three union contracts on the warrant: the Keene Educational Office Personnel Group, the Keene Clinical Service Providers and the Keene Custodians.

Keene voters from all five wards will cast their ballots March 10 at the recreation center on Washington Street from 7:30 a.m. to 7 p.m.