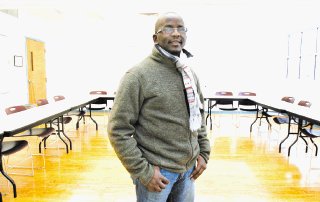 Antioch student Yves P. Gakunde stands in an empty classroom at the university. 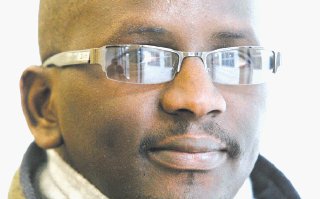 Antioch student Yves P. Gakunde stands in an empty classroom at the university.

Yves P. Gakunde has a dream and a nightmare.

The nightmare first: His homeland, Rwanda, depleted of resources, its sweeping forests and already-endangered primates wiped out, with worsening erosion and massive flooding.

The dream: coming to the United States for training in

conservation and sustainability issues, and taking what he learns back to Rwanda to help preserve the country’s environment.

The dream is looking more likely.

Gakunde, 32, came to Keene in 2010 to study sustainable development and climate change at Antioch University New England. He will graduate with a master’s degree in May.

And later this month, he will travel to Washington, D.C., to attend the Clinton Global Initiative University, an annual conference for student and youth leaders on global issues.

Along with his application to the conference, Gakunde submitted his proposal for how to enlist the Rwandan people in the effort to conserve the country’s natural resources.

“There’s a lot of pressure from these people (on) the forest,” he said.

“I feel like yes, we ask them to conserve and protect these natural resources, but they don’t have alternative resources.”

Gakunde’s solution is to offer the services — health care and education especially — that people couldn’t otherwise afford, and to make that an incentive for them to conserve the forests. And he wants to tap into the country’s tourism industry to help pay for it.

It’s a concept Gakunde worked with as an intern this past summer in Rwanda at ReDirect, a group working to conserve the Nyungwe park.

“I feel like we have to find a way to give that money back to the people so they can feel like they’re benefiting from conserving the resources,” said Gakunde, who is also working on grant proposals to fund the project.

This model — called payment for environmental services — is already happening on a small scale across Africa.

It’s a system that is still being tested but has the potential to promote conservation and improve living conditions in the developing world, said Beth Kaplin, an Antioch professor of environmental studies who also does conservation work in Rwanda.

Kaplin first met Gakunde at the National University of Rwanda when he was an undergraduate studying biology.

She supervised his senior thesis and later enlisted him to help develop the biology curriculum at the university with an emphasis on conservation. (That work is ongoing.)

“He’s very passionate, and really quick and dedicated to the work he’s doing,” said Kaplin, who encouraged Gakunde to come to Antioch. (He is one of three Rwandan students studying now.)

Gakunde is looking to enter a doctorate program after graduation. He was accepted to one at Antioch last week, but affording the tuition is difficult and he is looking for scholarships now. (His current studies are paid for with money from Antioch and the MacArthur Foundation, which also funded Kaplin’s work in Rwanda.)

But, similar to his attitude on conservation, he’s positive if he knocks on enough doors, one will open.

“I keep saying, there will be a way. I’m not sure how it’s going to work, but there’s always a way.”