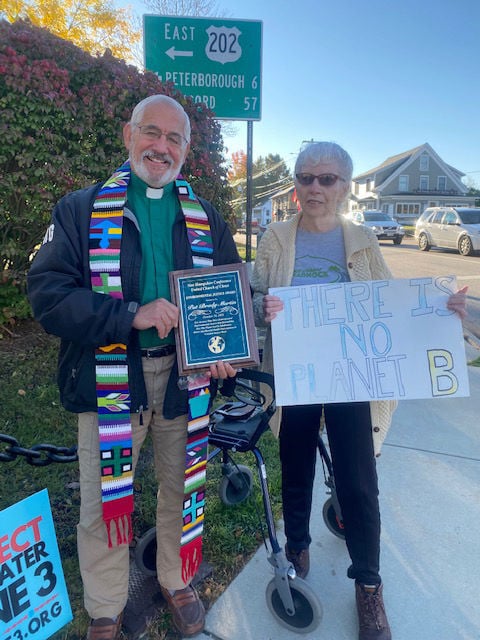 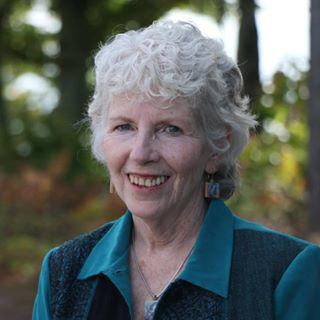 After 50 years of dedication to the climate movement, a Rindge resident has been recognized for her efforts with one of the inaugural New Hampshire Conference of the United Church of Christ’s Environmental Justice Awards.

Pat Martin and the Rev. Rob Grabill first met when they were both arrested for criminal trespassing at the Statehouse in Concord three years ago, where they protested economic injustices with the Poor People’s Campaign.

They stayed in touch. And last week, Grabill presented Martin, a Rindge resident, with the award at a demonstration in downtown Jaffrey.

On Friday, Grabill, of the Church of Christ at Dartmouth College, presented the award to Martin on the street corner where she regularly participates in “Fridays for Future” climate advocacy demonstrations. The award recognizes individuals and groups across the state who have contributed to environmental justice and Earth stewardship.

Martin, 72, a retired electrical engineer, has been active in the climate movement for decades — protesting, testifying before the state, writing letters to legislators and championing clean energy. But when her husband passed away in November, she was finding it difficult to engage in climate activism, she said. Then she learned of the downtown demonstrations.

Martin joined the weekly protests in January after she saw on Facebook that Jaffrey native Maddy Springfield was organizing Fridays for Future protests downtown. Martin said she didn’t know Springfield at the time but figured the demonstrations could provide a nice opportunity to ease back into her climate work.

But she said the connections she’s made over the past several months at the demonstrations have really affected her.

“These young people that I’ve stood with just rock my world,” she said. “That’s really what gives me the most hope.”

Within the climate movement, young women in particular are a force to be reckoned with, Martin said — a sentiment that is reflected by the other two recipients of the award: Katherine Gage of Windham, a first-year student at Bowdoin College in Brunswick, Maine, and recent Middlebury College graduate Katie Aman of White River Junction, Vt.

Martin also expressed her admiration for Springfield, whom she described as an engaging leader and speaker.

“I’m so proud of her for getting it started,” Martin said.

But Martin didn’t just win the award for her work in downtown Jaffrey. According to her nomination letter, submitted by Marge Shepardson of Marlborough, Martin started the Rindge Energy Committee in 2007; helped Franklin Pierce University create its Institute for Climate Action program; has been involved with the Sierra Club, Citizen’s Climate Lobby and Keene Clean Energy Team, and is a founding member of the Monadnock Sustainability Hub.

And she’s still going. On Wednesday, Martin was outside the Statehouse protesting House Bill 549, which would slash funding for energy-efficiency initiatives. On Friday, she got home after receiving her award and immediately tuned in to the N.H. Local Energy Solutions Conference.

“She’s incredibly humble,” Grabill said. “This has been a real calling for her.”

Candidates for the award were considered based on their history of working with businesses, schools, communities and different climate organizations to advance environmental justice. The winners were selected by the church conference’s Environmental Justice Mission Group, which Grabill leads. The group felt that it was time to recognize and highlight the hard work people around the state are doing to address the climate crisis, he said.

As climate change harms the world’s most vulnerable populations, churches are getting involved, propelled by the principles of their faith, Grabill said.

“It’s a moral issue,” he said. “Religious communities and faith communities can provide the deep moral backing for this work.”

The floods, fires and crop failures that are tied to climate change and creating climate refugees illustrate that there’s no longer time for debate and arguments, Martin said.

“It’s time to get attention to the fact that we really have to act,” she said. “We just do.”

Between knowing there’s innovative technology that can be used to mitigate climate change and seeing the tenacity with which younger generations are advocating for change, Martin said she feels hopeful for the future.

“It’s all right there. We can do it,” she said. “We just need the political will.”