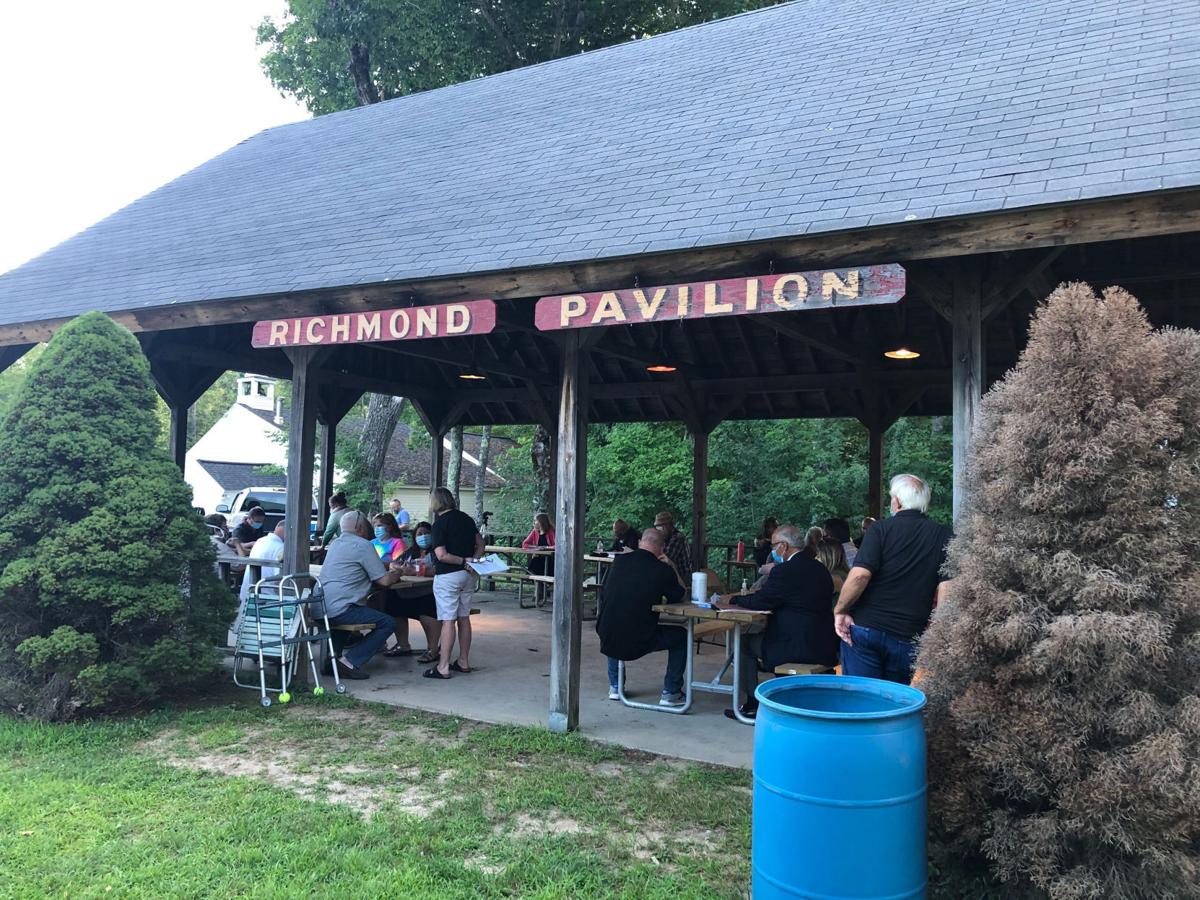 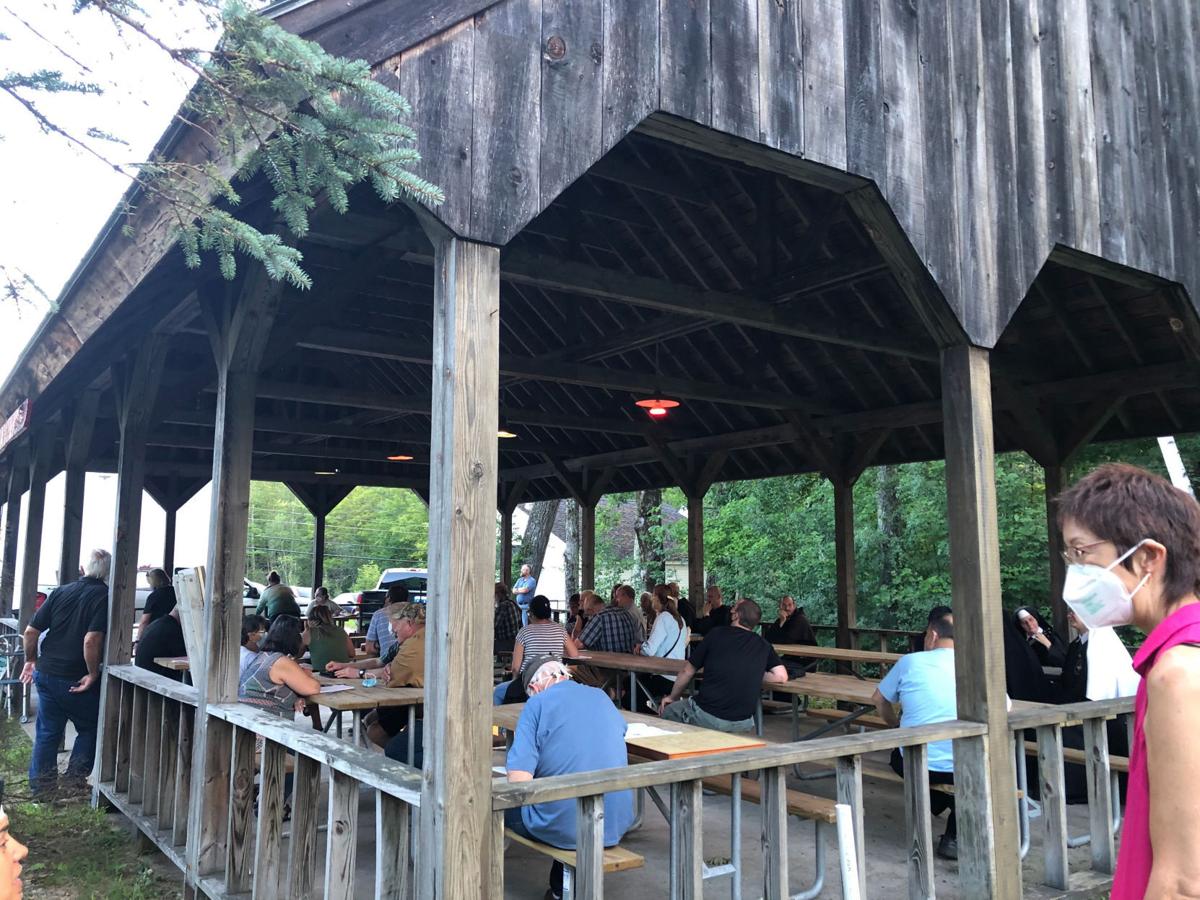 Richmond residents address the town’s Zoning Board of Adjustment during a public hearing Wednesday night on a proposed cell tower. The hearing in the pavilion behind the fire station extended deep into the night. 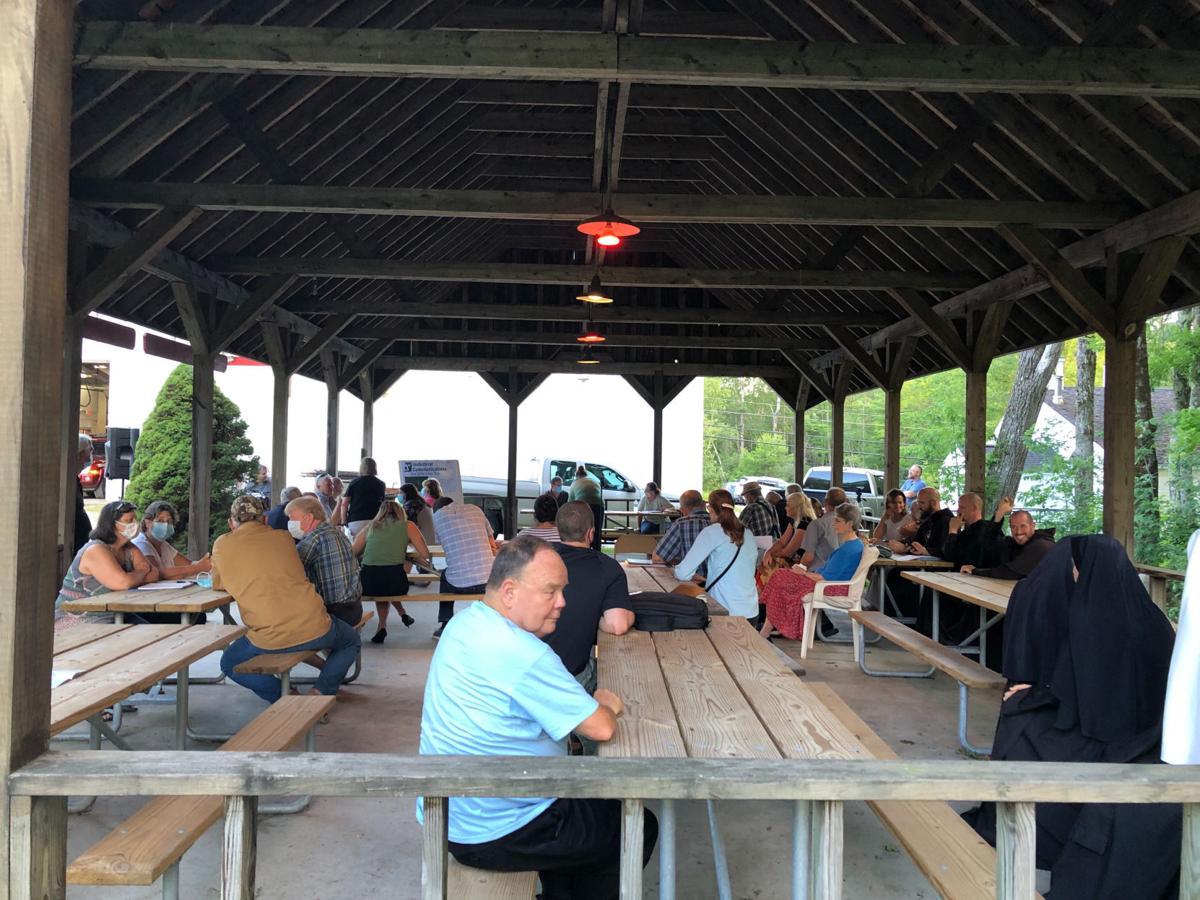 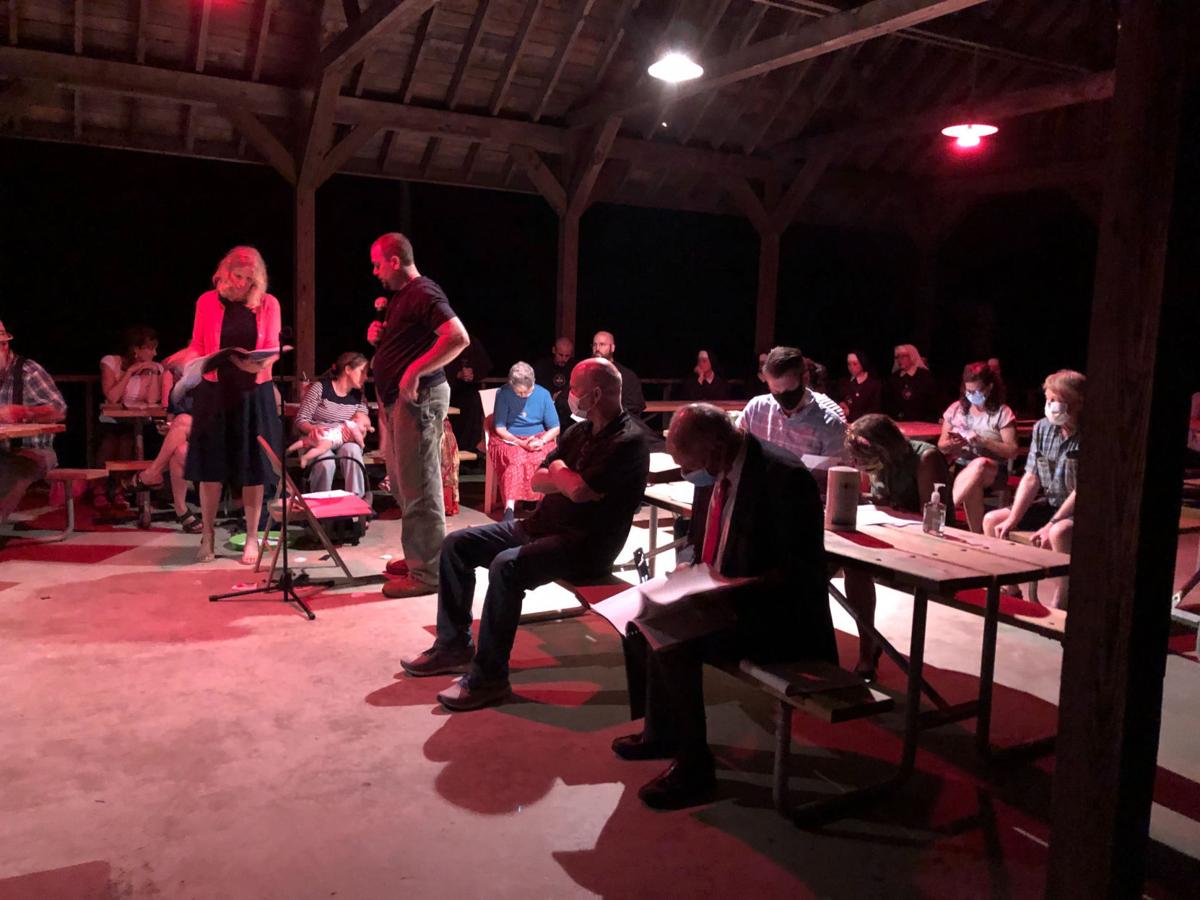 Richmond residents address the town’s Zoning Board of Adjustment during a public hearing Wednesday night on a proposed cell tower in town.

Richmond residents address the town’s Zoning Board of Adjustment during a public hearing Wednesday night on a proposed cell tower. The hearing in the pavilion behind the fire station extended deep into the night.

Richmond residents address the town’s Zoning Board of Adjustment during a public hearing Wednesday night on a proposed cell tower in town.

RICHMOND — A decision on a proposed cell tower off Route 119 will be delayed for at least another month, after the town’s Zoning Board of Adjustment voted to continue a public hearing on the project at its next meeting, in early September.

About 50 people attended Wednesday’s hearing in the pavilion behind the Richmond Fire Station, which at times devolved into hostile exchanges between people in favor of the tower and those opposed to it. If built, the tower would provide cell service to more than seven miles on Routes 119 and 32 in Richmond that currently receive no coverage.

The board heard more than three hours of testimony from representatives of the Massachusetts-based company that would own the structure, Industrial Tower and Wireless, fellow board members and the general public before voting to resume the hearing at its next meeting next month.

Wednesday’s hearing began with a moment of levity when the four board members present considered asking the board’s vice chair, Larry Richardson, who was absent, whether he plans to attend subsequent meetings. One of the board members observed they would not be able to reach Richardson, however, due to poor cell service.

The hearing quickly became contentious, as board members and residents debated the dangers of the town’s poor cellular coverage and their concerns over whether cell towers that support 5G, a groundbreaking cellular network, have damaging health consequences.

Many of the 5G-related concerns were similar to those shared by Keene residents at a public hearing in February, when many said the high-frequency radio waves emitted by 5G devices constitute dangerous radiation.

A 2018 report published by the National Toxicology Program found that 5G emissions “are likely to penetrate no deeper than the skin” but that the lower-frequency waves used in 2G and 3G networks can penetrate several inches into the human body.

Kevin Fadden, an ITW representative, told the Richmond zoning board at a July public hearing, which was subsequently deemed illegitimate due to a procedural error, that the proposed tower would initially provide 4G coverage but transition to 5G.

Antoinette Cincotta, a member of the board, began Wednesday’s hearing by requesting that the board deny ITW’s proposal on the grounds that the cell tower does not satisfy the town’s guidelines for granting “special exception” zoning status to a development, which ITW needs to build the tower.

Alan Schmidt, acting as the board’s chairman, dismissed Cincotta’s request and argued the board needed to hear ITW representatives’ proposal before receiving input from the public.

The ITW presentation began with testimony from Steve Grill, an attorney representing the telecommunications company. Grill preempted residents’ concerns about 5G networks in stating the zoning board does not have discretion to regulate radiation from cell towers, which he said is done by the Federal Communications Commission.

He also cited evidence showing that emissions from 5G towers do not pose a risk to people living nearby but reiterated that the ITW tower would comply with FCC safety standards.

“If people have other concerns about 5G, they should be brought to their representatives in Washington,” Grill said.

Fadden then presented a series of maps showing attendees that the proposed cell tower would be located 1,500 feet from Route 119, on the property of Jeff and Susan Taylor, who own a Christmas tree farm and support the tower.

Fadden shared that the cell tower would be 175 feet tall and 940 feet from the nearest residence, making the undeveloped area around it, known as the “fall zone,” nearly four times the state requirement that it be 125 percent of the tower’s height.

After Cincotta asked Fadden several questions about the site, Schmidt broke in to say the Richmond Planning Board would be responsible for site plan review if the zoning board approves the ITW proposal.

“What we are looking for is whether or not this is acceptable under a special exemption,” Schmidt said. “All we are reviewing is [whether] you can put a cell tower on that spot, according to the Richmond zoning ordinance.”

Cincotta countered that the zoning bylaw requires the board to consider the effect of a proposed development on the value of adjacent property and conditions that “are not typical” for the area, among other things. She claimed that properties abutting the cell tower would lose 20 percent of their value and that 5G may pose serious health risks to the town’s residents.

Cincotta also questioned ITW’s engineering and regulatory compliance manager, Kevin Delaney, about the tower’s potential visibility, especially during the winter months when there is less foliage.

Delaney assured her that the cell tower would not be visible at any point, due to the high density of trees in the area, and noted the safety benefits of providing coverage to the more than seven miles on Routes 119 and 32 in Richmond that have no service.

At least four residents told the board that they support the tower because of the improved cellular service it would provide.

Arlene Crowell, who serves as communications director for the Cheshire County Sheriff’s Office, said the lack of coverage on main roads in Richmond makes it more difficult for emergency responders to do their job. She added that people calling 911 from the town often need to drive farther down the road to find service, wasting crucial time.

Another resident, Jen Daniels, said her husband recently fell 18 feet from a roof onto the concrete floor below while working in Richmond and that he would not have been able to get help if others had not been around because he did not have cell service.

Many other residents acknowledged the benefit of improved coverage but voiced concerns about the possible health effects of 5G networks and questioned the research provided by ITW representatives.

Mary Taylor, who lives on Route 32, said she recently spent a year undergoing cancer treatment and does not want to put herself at further risk of radiation.

“I’m not necessarily against or for [the cell tower],” Taylor said. “I just want to be sure that I’m not going to deal with a recurrence of cancer.”

Several residents called on the zoning board to delay its decision until a state commission studying the health repercussions of 5G networks publishes its conclusions, which are expected in November.

“This is a brand-new, novel thing that we’re exposing the entire town to,” Joseph Norman told the board.

Eric Duda, a member of the town’s planning board, said he entered the public hearing undecided on the project but was ultimately persuaded to support it. Duda said that Richmond residents will likely be exposed to 5G radiation in surrounding towns in the coming years, minimizing the impact of a single additional tower.

In a conversation after the hearing, however, Duda said he remains unsure how he would vote if the issue comes before the planning board.

That will not be for at least another month, however, as zoning board members adjourned Wednesday’s public hearing just after 10:15 p.m. and unanimously agreed to continue the hearing at the board’s next meeting, on Sept. 9.

The meeting in September will be the zoning board’s third on the cell tower proposal.

The board postponed its initial hearing, on July 15, after learning that Christopher Hamilton, whose property abuts the one that would host the proposed tower, was informed of the hearing just five days earlier. The town is required to notify abutters of a public hearing at least two weeks before it will occur.

Hamilton voiced similar concerns again on Wednesday, arguing that the notification letter for the second hearing was not also addressed to his wife. Despite his objections, the board continued to hear public comments.