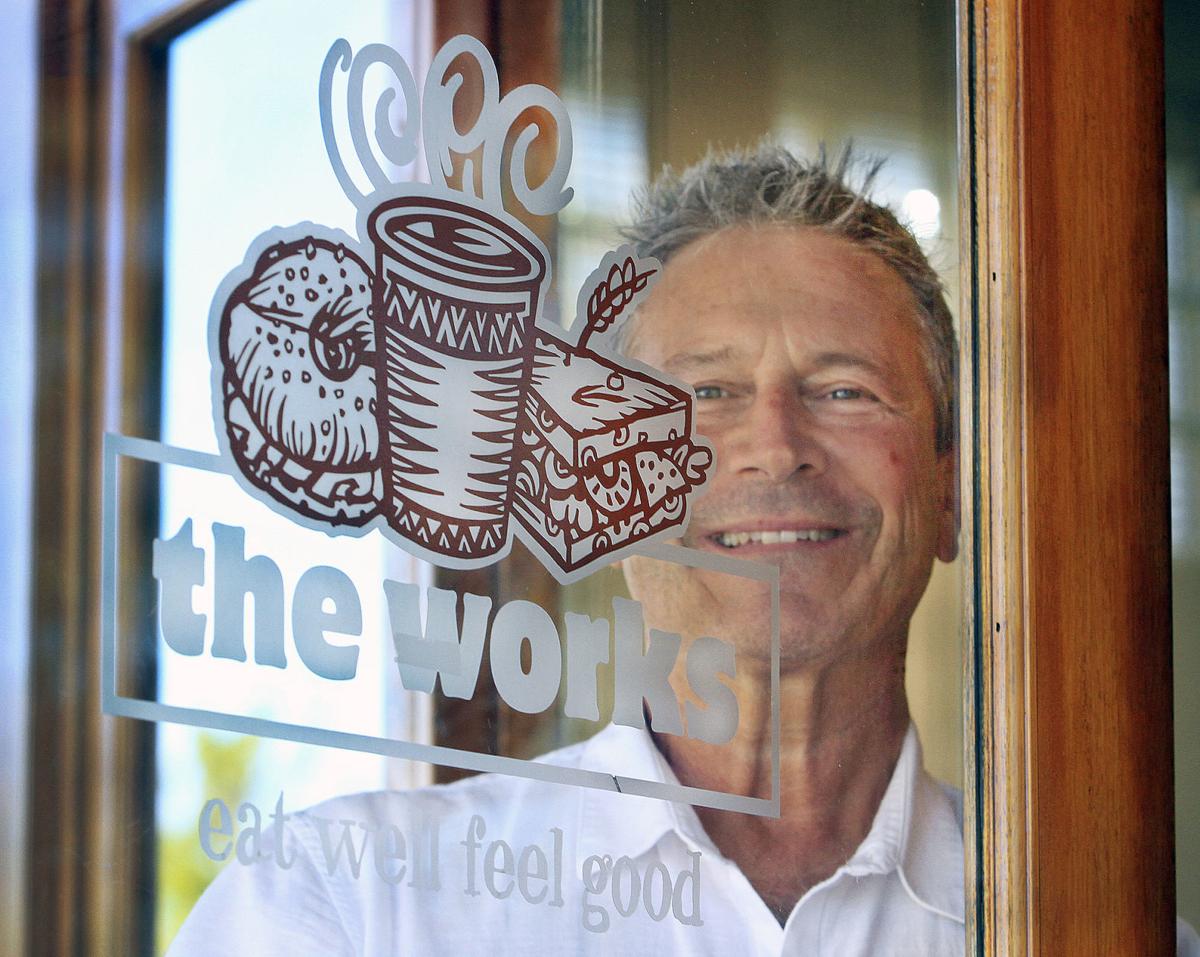 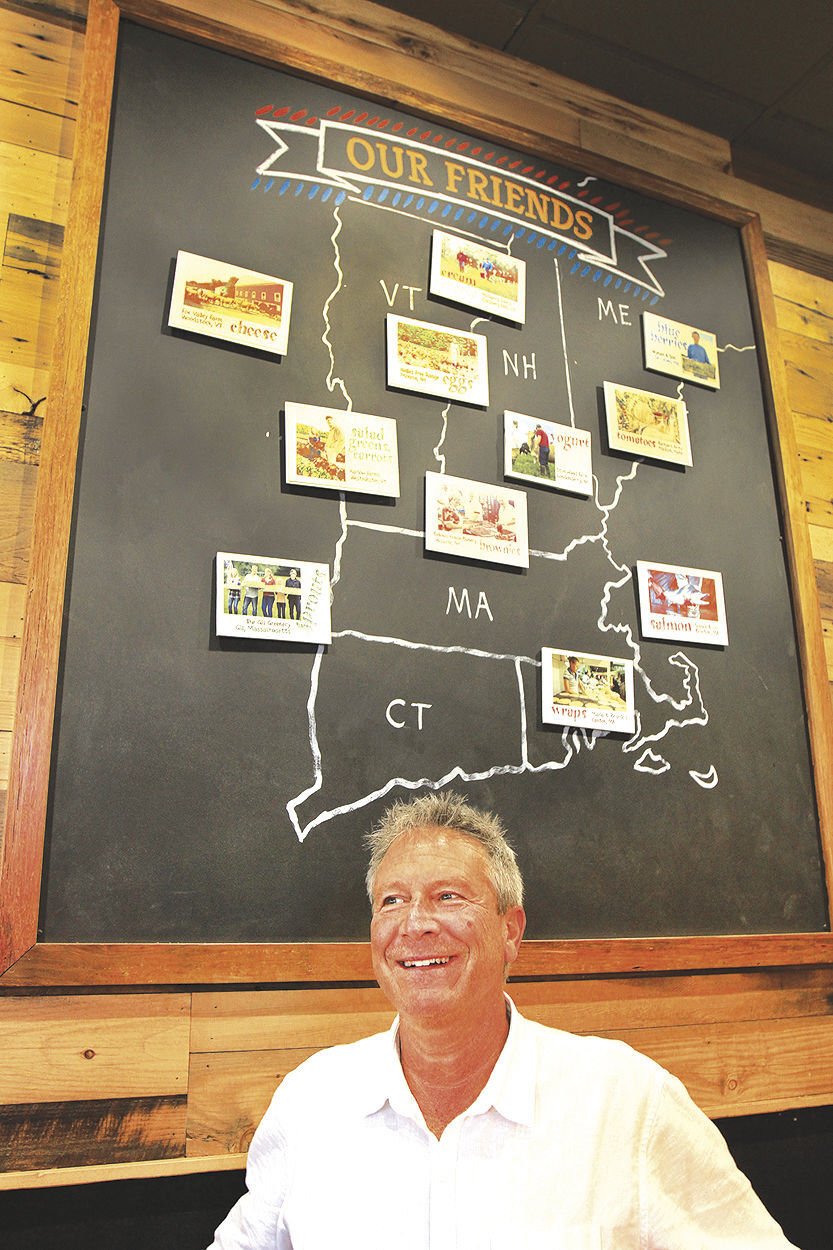 New Hampshire dining establishments, such as The Works Café chain, owned by Richard F. French II of Spofford, shown here at his location in Keene, can reopen to dine-in service June 15.

New Hampshire dining establishments, such as The Works Café chain, owned by Richard F. French II of Spofford, shown here at his location in Keene, can reopen to dine-in service June 15.

Fast-talking and animated, Richard F. French II can be difficult to pin down in person.

Last weekend, he drove to Boston for an evening meeting and was in Portland, Maine, to check on one of his cafés just a couple days later. In the course of a week, French drives to several cities across New England while still making it to bed by 9 p.m.

The owner of The Works Café was born in Meriden, Conn., but considers Manchester, Vt., home, a graduate of Burr and Burton High School.

French, 56, met his wife, Christy Bonneau, 25 years ago when he was considering running in the Maple Leaf Marathon his company was sponsoring, and some friends told him to run with her. They married two decades ago at Gouverneur Beach on the French island of St. Barthelemy in the Caribbean, where the family returns every anniversary to celebrate.

He lauds his wife for her support and her skills as an artist. For her 25th birthday, when Christy was waiting tables in Brattleboro, French gifted her a studio on their property to focus on her art.

Together they live in a log cabin in the woods of Spofford, where they play card games and don’t have TV and spend occasional evenings sleeping sans tent under the moon.

Between family and managing eight cafés in four states, French said he sometimes worries he doesn’t have enough solo fun.

“It’s mostly work and family, not enough hobby. I need to work on that in the next chapter of my life.”

French said he was raised around both entrepreneurship and the restaurant business, since his father, Richard, owned what he says was Vermont’s first Chinese joint in Manchester.

“So I was weaned in the restaurant business and, you know, did dishes when I could reach the dishwasher on the milk crate,” he said.

While attending the University of Vermont in Burlington, he continued working in the industry because it was familiar.

Calling himself a “serial entrepreneur,” French said The Works was his fourth startup. The first was a sunglasses company. Then French and a roommate bought an old black Cadillac from a funeral home, tinted the windows and began a chauffeur gig, driving around musicians for the university’s concerts.

French opened a breakfast-in-bed service, with deliveries including chocolate truffles, the morning newspaper, flowers, bagels and sparkling cider (since he wasn’t yet old enough to sell alcohol). One of his claims to fame, he said, was delivering breakfast in bed to Bernie Sanders after he became mayor of Burlington.

He juggled these endeavors while waiting tables through college. In 1986, however, he graduated with a degree in international business and a minor in French. His mother, Roberta Beamis, urged him to stay away from restaurants and pursue medicine or law or “whatever else our parents dream for us to be,” he said.

After considering a host of jobs, from a wine importer to an innkeeper, he tried a position at a financial management company in a suburb of New York City. He didn’t like it.

Eventually, he returned to his passion for startups: “So I thought, ‘well, you know, I might as well start another company.’ And so that was my fourth.”

French had read a book by John C. Maxwell, “The 21 Irrefutable Laws of Leadership,” that still heavily influences his perceptions today. One law in the book is the law of timing, French explained, and when he was considering launching a business, bagels were getting big.

The doughy staples arrived in the U.S. with the Eastern European immigrants of the late 19th century, according to an article on smithsonianmag.com. Bagels remained in Jewish markets for the most part until the 1970s, when “ethnic food” became popular. Around the same time, the Lender family began marketing a brand of frozen bagels through TV ads.

In 1984, Kraft Foods bought Lender’s Bagels, offering a brilliant chance to market Kraft’s Philadelphia cream cheese alongside them, according to that same article.

That growing success was the backdrop for French’s idea to open a bagel shop with three friends in Manchester, Vt. They rented a house jokingly dubbed the “bagel commune” and opened Vermont Bagel Works on July 4, 1988.

The business was idealistic in its values from day 1, he said, starting out with local strawberries and blueberries and Vermont-made cream cheese. The triple bottom line — people, planet, profit — which has become a more established idea with rising climate change awareness, fit their model three decades ago because “it just felt right,” he said.

Within a year, Bagel Works opened a second store in Keene, a college town that brought huge success, too. French’s company continued to soar with the popularity of its product — by the mid-1990s, according to the Smithsonian article, bagels had become a multibillion-dollar industry in the U.S.

The company began looking at cities along the east coast of New England, and a year after launching in Keene, Bagel Works opened in Portland, Maine, in a joint venture with Green Mountain Coffee Roasters.

French admitted that he had a pretty big ego as his company continued to prosper.

With three stores, French built a production plant in Keene in the early ’90s and raised money by bringing in investors, but that meant he lost control of the company.

Bagels were still booming, and there was pressure to keep up.

He set out to open 20 stores, the capacity the factory could handle. Bagel Works would have to expand rapidly to support the factory, so French and his team tried opening five stores in a year on the coast of New England.

The popularity that shot his company into success, however, also became a hurdle to securing a lease. Bagel Works was far lesser known than chains like Einstein Bros. Bagels and Dunkin’ Donuts, which was broadening its footprint, and French said it became incredibly expensive and competitive to get a store.

Meanwhile, the company began hemorrhaging money because of the Keene factory.

“We built an awesome plant, it was great, but it was costing us a ton of money every day to run because we needed to grow really quickly,” he said.

With so much capacity in the plant, French tried getting into the wholesale business, but the factory wasn’t built for that and struggled to keep up.

He said he got a few offers from larger chains to buy Bagel Works.

“Our investors and our board thought we could work our way out, and it was a lot of pain,” he said.

The company opened another 10 stores, including two drive-thrus, in the mid- to late ‘90s. Rapid growth didn’t reveal itself to be the solution, however. In 2002, French stood on the factory floor and announced the Keene plant would close.

He felt a strong sense of pride in the facility, which was built with sustainability and a social mission in mind, he said. The factory worked with Monadnock Developmental Services to offer jobs to people with disabilities, and French’s most heartbreaking memory is one of those employees asking if the closure meant he’d need to find somewhere else to work.

“And he gave me the biggest hug and one of those biggest kinda wet kisses on my cheek that I’ll never forget to this day,” French said. “… and he said, ‘But Mr. Richard, this is the best job I’ve ever had. I love it here.’ ”

Ultimately, it took more than two years for the company to shrink its way out, as French called it, a period that included shutting down eight stores, reducing the company’s portfolio to five locations. He laid off more than 50 people.

“And you know, here we were, this great company that was doing all these great socially responsible things that had to make some tough calls to stay alive,” he said. “... It was a huge blow to my ego.”

French said the sense of failure weighed heavily on him for years afterward.

“There was a period of time where I thought, ‘I never want to open another café in my life,’ ” he said.

And it would be another eight years from that day on the factory floor before he’d find the nerve and the confidence to launch a new store.

In the end, he said, “you’re either growing or you’re shrinking. There’s no standing still.”

After shuttering several locations, the business changed its name to The Works, evolving from a bagel chain to a bakery/café concept.

In 2010, the company started branching out again. French jumped back on the horse, determined to be as energy-efficient and locally sourced as possible. The first new store opened in Brattleboro with repurposed wood and materials, and the café became the first green-certified restaurant in Vermont, he said.

Now he’s the chain’s sole owner and operates eight locations in New England: the Keene, Brattleboro, Manchester and Portland cafés, plus ones in Portsmouth, Durham and Concord, and another in Amherst, Mass.

Working to reduce his company’s carbon footprint has been a goal for years, including a $50,000 compost initiative, a recent switch to plant-based straws and a plan to find gloves that won’t go to the landfill.

But with every step French outlines — from locally sourced ingredients to efforts to pay all employees $15 an hour — he’s quick to note that it’s still not enough.

“We’re on no pedestal here,” he said. “We still have a big-ass dumpster out back, they still don’t make enough money, our staff, and if I really sourced sandwiches local from bread to spread … it would be a $12 or $15 sandwich.”

French recalled when his son was 3 and asked if he served “happy chickens” at his cafés, chickens that peck at grasshoppers in pastures.

That tireless persistence drew Stuart Skorman close to French over the years. The two entrepreneurs met as neighbors — French opened his first Bagel Works next to Skorman’s video rental store, a chain he sold to Blockbuster Video in 1994.

They grew close as friends and businessmen as Skorman became an adviser to Bagel Works, a position he still holds. What he loves about working with French, he said, is his ambition and dedication to improving.

“He’s always striving to do better: Better for his communities; better for the people that he works with; better, obviously, for his family,” he said.

Skorman remembered how difficult the shrinkage period was for his friend.

“You do your best learning in failure,” Skorman said. “… I’ve done the same thing and failed some times and learned a lot, so I know what he was going through in those really tough years.”

Coming through that experience, though, he said French turned the company into a highly successful business. Skorman lauded his work ethic and commitment to each community in which he opens a store.

French said the adage “life’s about the journey, not the destination” has felt apt since he first heard it. He keeps moving because there isn’t an end he’s working toward.

“And I still have a lot left in me,” he said, pointing out that he’s only 56. “... I definitely have a couple more chapters. And I don’t know if that is at The Works or if that’s helping other businesses or if that’s trying to share lessons with my son and be present with my wife.”