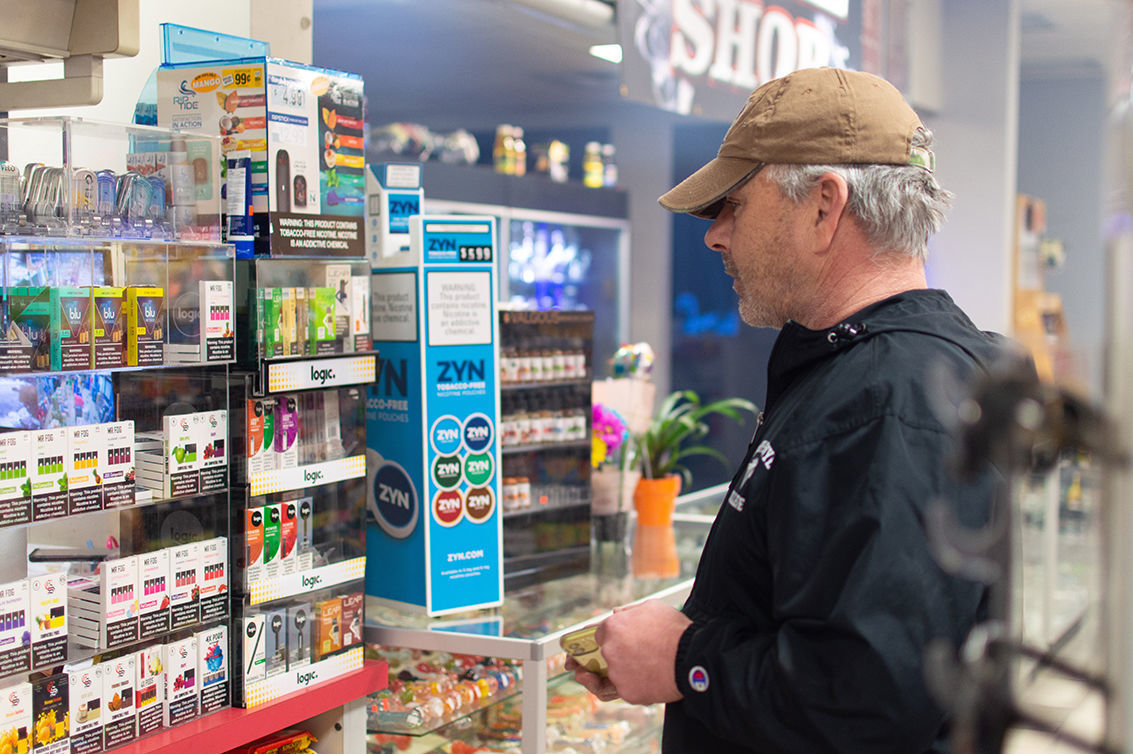 Tom Burke of Orange, Mass., peruses e-cigarettes at North of the Border in Rindge Sunday evening. A weekly customer, he said the news about the robbery there is a shame, calling the family that owns the store “real good people.” 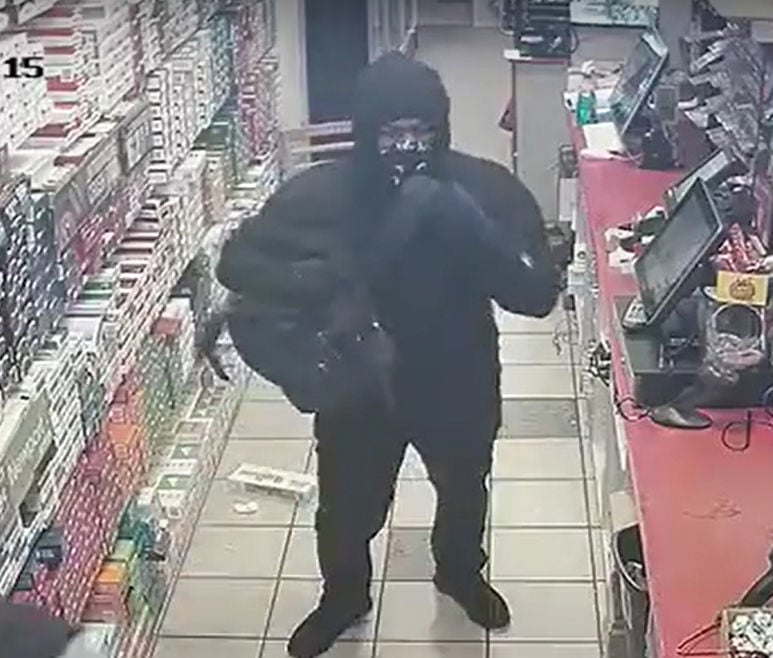 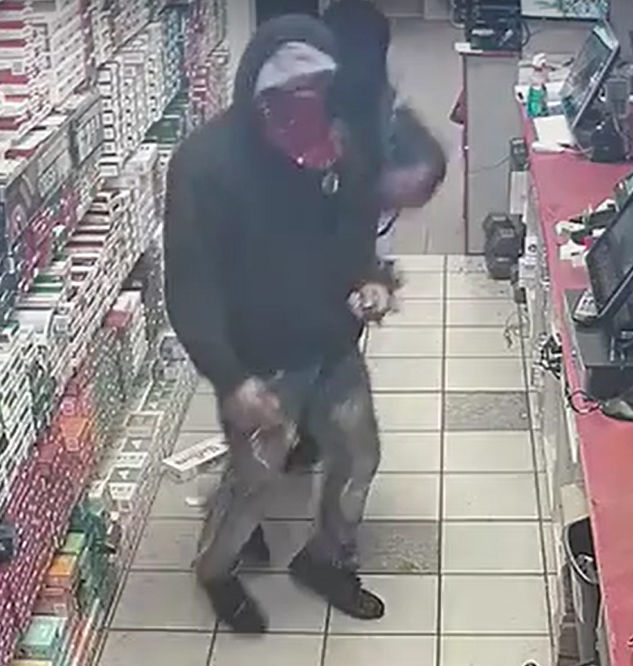 Tom Burke of Orange, Mass., peruses e-cigarettes at North of the Border in Rindge Sunday evening. A weekly customer, he said the news about the robbery there is a shame, calling the family that owns the store “real good people.”

Two armed robberies of local convenience stores in as many weeks have some residents concerned for their safety. Meanwhile, support continues to pour in for these family-owned businesses.

Rindge police responded to North of the Border on Route 202 around 9:40 Friday evening, where a store clerk was stabbed during a robbery and taken to a Massachusetts hospital, according to a news release. His injuries, which included a stab wound to the abdomen, were non-life-threatening, the release said.

Police learned that two people in masks and dark clothing — one armed with a knife and the other a handgun — had jumped over the store counter and attacked the clerk, who shot at them as they fled on foot.

Rindge police said Sunday night there were no updates in the case.

Just 10 minutes away, State Line Grocery on Route 12 was robbed on the evening of Jan. 15, according to Fitzwilliam police. Three masked men armed with knives and a gun allegedly jumped the counter and took money, nine cartons of Camel cigarettes and three cartons of Seneca cigarettes.

Police haven’t publicly tied the two incidents together, but Facebook commenters have noted the similarities. Rindge police said Sunday they are “investigating if there’s a connection” between the two robberies.

Frank Patel, owner of State Line Grocery, said he also thinks the culprits are the same. His family has owned the store for eight to 10 years and has never faced an crime like this, he said. The terror is multiplied when there are family members working in the store, he added.

“We were all shocked, obviously. It’s the first time this has happened,” he said.

Patel said there’s a panic button behind the counter, but the robbers caught the clerk while he was exiting the restroom, so he couldn’t get to the button. As far as security, he said he might add more cameras if there are any blind spots.

More than anything, Patel said, the support from customers has been comforting.

Both in the stores and online, local residents have praised the owners and employees as “well-respected folks” and “really good people.”

The news also has residents worried about the safety of store clerks, as well as themselves. In Facebook community groups, a handful of people wondered if the crimes are linked to the opioid crisis that’s gripped the area for so long. A few said they’ll be more vigilant when running errands.

One woman said she and her husband plan to buy guns. Ali Collins wrote that, since she moved to Rindge from Salem, Mass., in 2004, “this is the first time something like this has really upset me.” Calling it scary, she wrote that her husband discourages her from even getting gas alone because it seems unsafe.

“They [the robbers] are bold enough to go into a store and bring a knife and a gun,” Collins wrote. “I feel like they will hit every store they can, and they don’t care who they will take down next.”

Arwyn E. Lennon of Rindge wrote in a Facebook comment about the strong connection residents in small towns have with these shops.

“For myself, I feel we know the clerks/owners of these cornerstone businesses and they are cornerstones because of the limited shopping options in our rural areas,” she wrote. “We frequent these places and cheerfully wave, chit chat, our kids are remembered and occasionally treated to sweets.”

But that rural character, Lennon added, also establishes the shared feeling that the area is insulated from such acts of violence. These robberies seem “more invasive and hurtful,” she wrote, as if they are an “outside attack on our rural choices making us ‘easy’ targets.”

At the counter of North of the Border Sunday evening, Jamal Mortada sold scratch-off tickets, cigarettes and snacks while telling a reporter about the community’s reaction to the news.

He owns and operates North of the Border with his two brothers, Ahmad and Ali, the latter of whom suffered the stab wound the night of the robbery. Ali is out of the hospital and recovering, Mortada said.

This was the first violent incident since the family took over the store in 2004, he said. Similar to State Line Grocery, there are no glass barriers to protect clerks behind the counter, which sits directly in front of the entrance.

“We have guns, you know. Like everybody, we do our best to be safe,” Mortada said.

Between that and cameras in the store, he seemed to believe the store is about as secure as it could be, though he said he wouldn’t reveal all of the employees’ safety measures.

While the robbery was tragic, he said his family has appreciated the kindness from customers, pointing to flowers and cards that they’ve received over the weekend.

“It’s not only like store and customer. It’s like family,” Mortada said, as Ahmad nodded in agreement. “... And we mean it.”

As Mortada spoke, a customer cut in and asked if Ali was alright. The man said he didn’t need to buy anything but wanted to come in and offer his well wishes for the clerk’s recovery.

“Tell him Crazy Charlie says hi,” the man said, describing his usual scratch-off purchase to help Mortada jog his brother’s memory of the customer. Mortada laughed and thanked the man for stopping in.

Smiling, he said, “See? I don’t have to tell you about it. People come in, just like that.”

Anyone with information about the Rindge robbery is asked to call Sgt. Rachel Malynowksi at 899-5009, extension 15.

Anyone with information about the Fitzwilliam robbery is asked to contact Fitzwilliam Police Chief Leonard DiSalvo at 585-6565 or chief@fitzpolice.us.