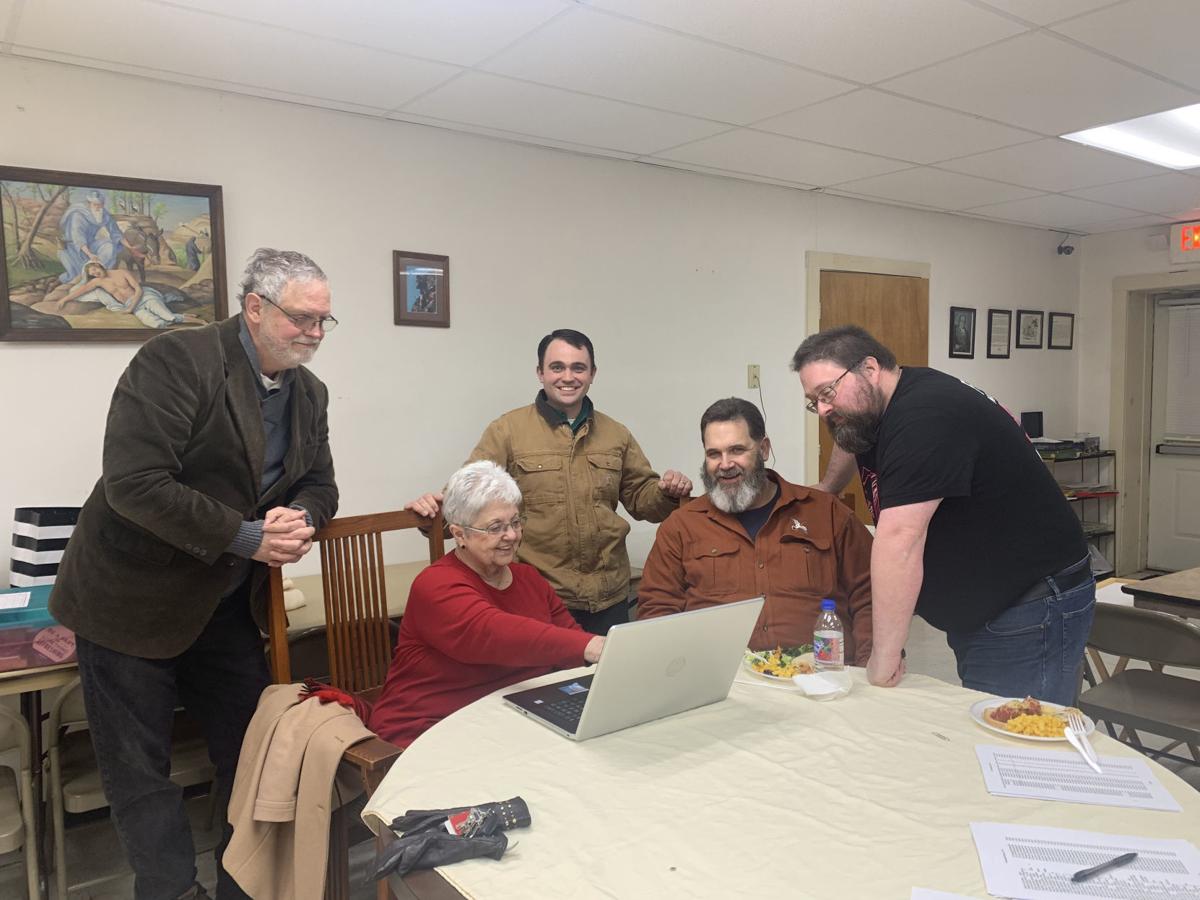 Local Republicans gathered at the Odd Fellows Hall in Keene Monday, on the eve of the N.H. Primary. From left are Leroy Watson of Walpole, Marilyn Huston of Keene, Brandon Day of Winchester, Sly Karasinski of Swanzey and Chester Lapointe of Winchester. 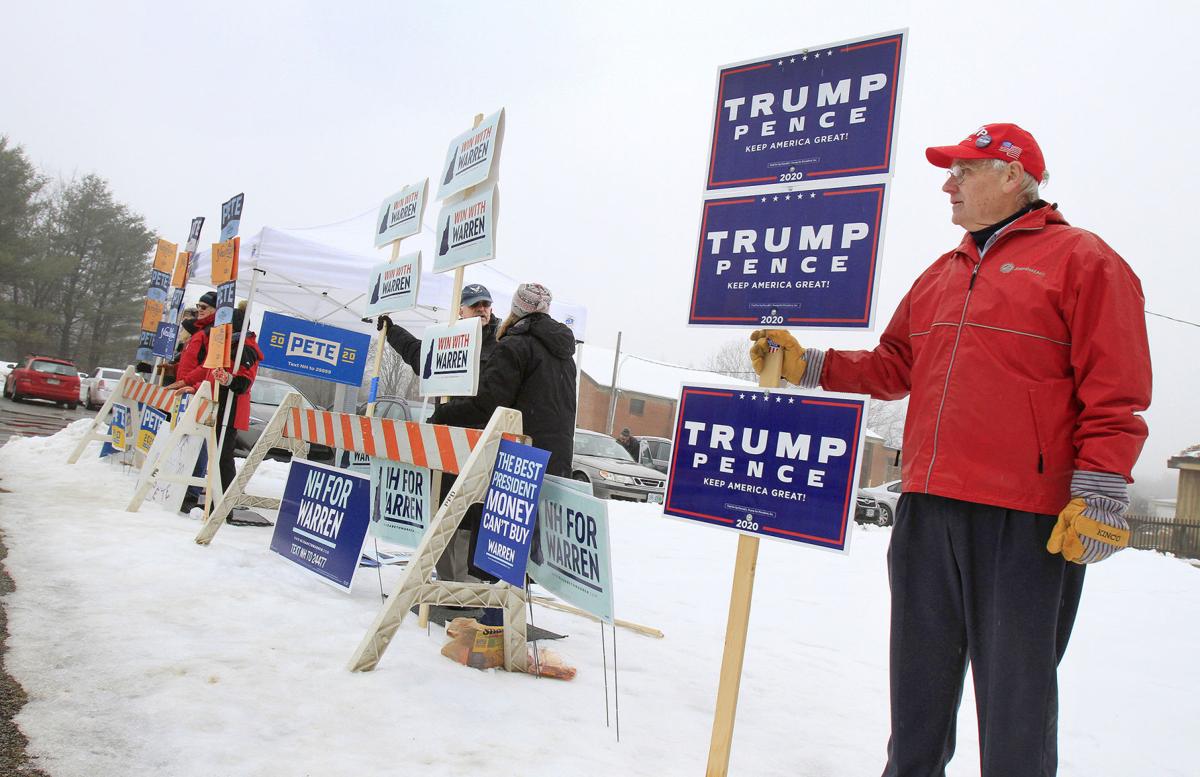 Local Republicans gathered at the Odd Fellows Hall in Keene Monday, on the eve of the N.H. Primary. From left are Leroy Watson of Walpole, Marilyn Huston of Keene, Brandon Day of Winchester, Sly Karasinski of Swanzey and Chester Lapointe of Winchester.

With the incumbent on the Republican side, most of the attention in the N.H. Primary was directed toward the Democratic candidates. But even in the absence of a serious contest, local Republicans still took to the polls Tuesday and expressed support for President Donald Trump as they waited for the results to unfold.

“It’s basically Donald J. Trump, and 16 other people that nobody quite knows who they are,” John Therriault of Keene, treasurer of the Cheshire County Republican Committee, said of the GOP field.

The county committee hosted a “primary eve” potluck dinner in Keene Monday night for attendees to phone voters ahead of Tuesday’s primary and watch Trump’s rally in Manchester that night.

By the start of the president’s speech, six people had gathered at the Odd Fellows Hall on Marlboro Street. The committee’s chairwoman, Marilyn Huston, 76, of Keene, said the majority of the group’s members were in Manchester to see the president in person.

“I just want to see people vote,” said Huston, “even if their decision is to vote for someone on the other side of the aisle.”

Based on local turnout figures provided by area town clerks, Huston got her wish.

Westmoreland and Gilsum were among communities whose turnouts Tuesday exceeded 50 percent — at 56 and 52, respectively — whereas Harrisville posted a voter turnout of 62 percent. In Keene, 41 percent of voters turned out across the city’s five wards.

As with the state as a whole, Trump carried every community in Cheshire County, over a challenge by former Massachusetts Gov. Bill Weld.

“I voted for Trump because everything that he claimed he was going to do, he’s been trying, and the Democrats have done nothing since he’s been in office but to take that man down,” McKane, 60, said. “... The health care in this country is terrible. Our roads are terrible.”

Samantha Donais, 35, of Winchester, said she has been pleased with the president’s accomplishments, including on the economy, trade with China and the southern border wall.

“I think he’s amazing, and he’s doing wonderful things for the country,” she said. “And it’s nice to finally have someone who’s representing the American citizens.”

Everyone at Monday’s potluck in Keene expressed their intent to vote for Trump, as did a couple other local Republicans contacted Tuesday.

Chester Lapointe, 40, of Winchester, a member of the State Republican Committee, has been following local and national politics his whole life. “It’s like the Super Bowl,” he said at the potluck of New Hampshire’s first-in-the-nation status.

Leroy Watson, 61, chairman of Walpole’s Republican committee, said he wanted to see some clarity on the Democratic side. “So many candidates have messages that aren’t so far apart,” he said. “We saw this in 2016 with the Republicans.”

He noted that the requirements to get on the ballot in New Hampshire aren’t particularly difficult to meet. All a candidate needs is $1,000 or 10 signatures from each of the 10 counties in the state.

“It would be cool to get on the ballot,” said Watson, “sort of as a bucket-list type of deal.”

Watson said Hawaii Congresswoman Tulsi Gabbard had the best performance during Friday’s Democratic debate at Saint Anselm College in Manchester. She wasn’t on stage that night, but had ads playing during each commercial break.

“She wasn’t there attacking other candidates, nor did she get attacked, but her message was still there,” Watson said.

Therriault said having an incumbent candidate means a lot less work for state Republicans. “I’m enjoying eating popcorn and watching the food fight within the Democratic Party,” he said.

This article has been updated with a revised turnout number for Keene, which the city released after this article first went to press.