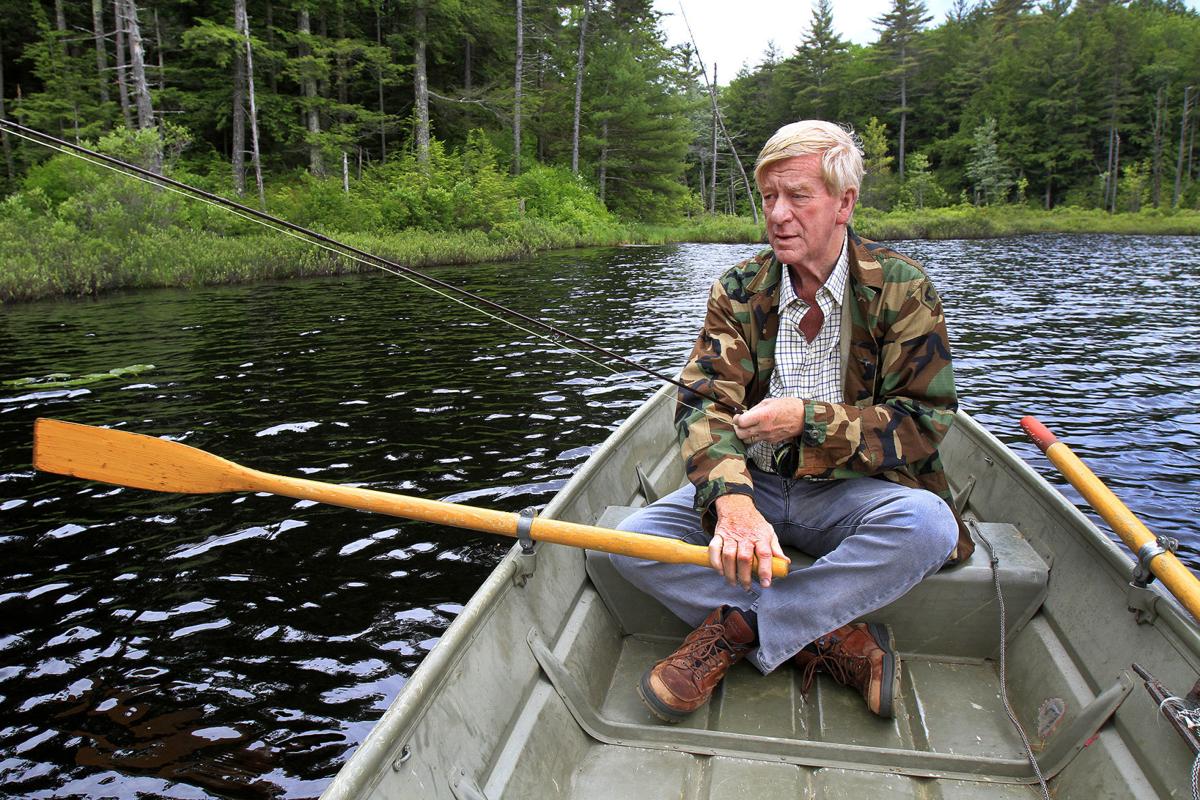 Presidential candidate Bill Weld manuevers his rowboat as he fishes on a Gilsum pond Friday afternoon. 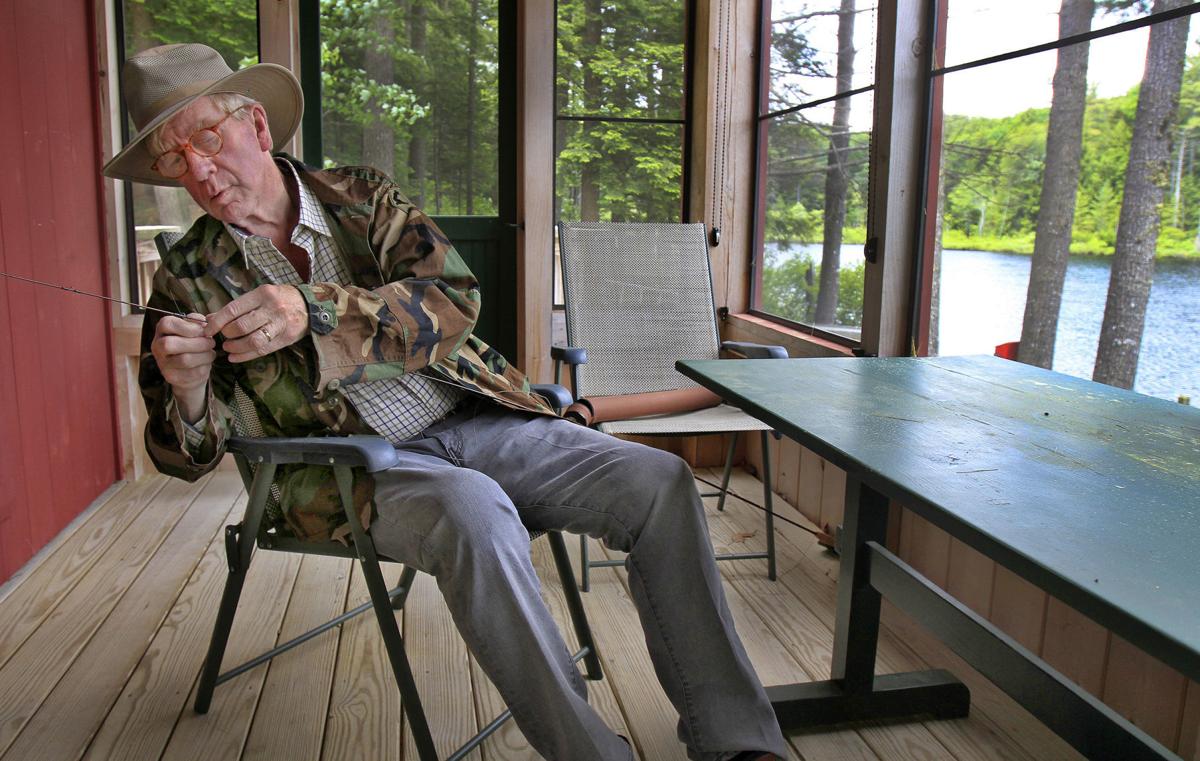 Presidential candidate Bill Weld manuevers his rowboat as he fishes on a Gilsum pond Friday afternoon.

GILSUM — Before changing from his TV-ready navy blue suit into a pair of faded jeans and camouflage jacket bearing a subtle “Governor” insignia, Bill Weld traversed familiar territory in the Granite State.

Since 1986, the Republican presidential candidate and former Massachusetts governor has been fishing for trout on a 2,000-acre association along the Gilsum and Alstead border.

On Friday, Weld drove along a path that remains no match for a GPS system, relying mainly on dirt roads — and, on that particular day, an active logging site — after turning off of Route 10 and the Gilsum Stone Arch Bridge.

Weld, 73, pulled up to a neighborless cabin with his 27-year-old campaign assistant and stepson, Marshall Bradlee, whom he taught to fish as a youngster.

This was Weld’s first time back in Gilsum since launching his primary challenge to President Donald Trump, which he declared in April after discussing a potential run in Rindge with Franklin Pierce students in February.

Questions have loomed over the viability of Weld’s campaign and how much support he could win in the New Hampshire Republican primary. A February poll by the UNH Survey Center had Weld at 3 percent support among Granite State GOP respondents; Trump sat at 68 percent.

But on Friday afternoon, the only base Weld focused on was trout.

“Catch and release is against my religion,” Weld said while lacing his bait.

In 2016, Weld was the vice-presidential nominee on the Libertarian ticket, under former New Mexico governor Gary Johnson.

While serving as U.S. attorney in Boston, Weld hired a young Robert Mueller to be his deputy.

Weld said he has often brought former DOJ colleagues to Gilsum to fish, but said he never fished with Mueller, who would go on to serve as FBI director and, most recently, special counsel investigating Russian interference in the 2016 election.

In a May interview on HBO’s “Real Time with Bill Maher” in Los Angeles, the host called Weld “Republican-classic” and “an endangered species.”

But on Friday, Weld pushed back against the notion that there is no longer a place for more moderate, socially liberal and fiscal conservative figures in the party amid the GOP’s transformation on issues like trade and immigration under Trump.

Weld said he sees as an increasing appetite for an alternative to the entrenched stances of both major parties, pointing to his ticket’s record general-election showing for the Libertarian Party in 2016. He and Johnson won nearly 4.6 million votes, the highest for a third-party campaign since Ross Perot in 1996.

Frankly, Weld said, he is not concerned about winning over Trump’s base, instead seeking to “enlarge the electorate” with younger and independent voters.

Oftentimes when he’s on the campaign trail in the Granite State, Weld said he doesn’t meet a single Trump voter at some diners.

“Maybe they’re eating at the country club instead of the diner,” Weld quipped. “... And it’s possible there’s some self-selection, but believe me, I shake every hand in the diner.”

Rather than looking to restore core values to the Republican Party or preserve a nostalgia for New England conservatism, Weld said he is campaigning to forge a new future in American politics for millennials. He said his experience balancing budgets and protecting the environment in the Bay State set him apart.

But more than anything, Weld said he is surprised by a recurring theme he hears from voters on the trail.

“The thing that surprises me so much is how exhausted everybody seems. They seem to be exhausted by this president,” Weld said. “And for good reason.”

That outrage fatigue, Weld said, is intentional on the part of the Trump administration.

“Having their emotions inculcated in them, they can’t just go about their business,” Weld said before heading out of the cabin to try for some trout. “They’re worrying; they’re resentful. I think that’s on purpose.”

Silence set in as Weld rowed along the perimeter of the 10-acre pond.

Looking back over the years, Weld said that having fished with the likes of Red Sox legend Ted Williams and political decision-makers taught him that no matter the stature of a guest, once everyone gets on the water, a new kind of relationship is formed.

“Nobody says a damn word, and that’s the best kind of conversation you’ll have,” Weld said.

Western and rural-state politicians, Weld said, are particularly compatible while fishing, and others can show their true colors.

“I’ve also met more than a few phonies who pretend to be outdoorsmen and aren’t at all.”

As the trout remained elusive, Weld kept returning to the danger he sees in the Trump presidency, one he argues remains mostly unnoticed in the churn of the daily news cycle.

The amount of unconfirmed, acting agency heads — including, at present, in the Department of Defense, Department of Homeland Security, the Small Business Administration, the Federal Emergency Management Agency, Immigration and Customs Enforcement, the Federal Aviation Administration and the ambassador to the United Nations — may go unnoticed by many busy Americans, but Weld said recent tensions with Iran are an example of the stakes.

“That’s the question to ask with Iran,” Weld said. “Do you feel safer than you did 2½ years ago?”

As his campaign scales up, Weld said he will be rolling out a new website with policy positions, hitting as many house parties and diners as possible and placing a heavier emphasis on national media to reintroduce himself to Republicans and independent voters in open-primary states.

The task is not Sisyphean, Weld said — “This campaign is only going in one direction,” he asserted — and he added that he is ruling out a third-party run like in 2016.

“There are laws against that,” Weld said. “They’re called sore-loser laws.”

After 20 minutes without a hint of a bite, Weld’s rod lurched forward, and while maneuvering the oars he reeled in a small but feisty fish.

“He’s not even a trout,” Weld said, before tossing the fish overboard.

Did this go against his “religion”?