For years, high food insecurity rates — higher than the state average — have been reported in the Monadnock Region, but many residents who qualify for state or federal nutritional programs that could help end up not enrolling.

The COVID-19 pandemic and its many roadblocks have only exacerbated these concerns, highlighting the need for expanding access to services for families and children.

A local group, the Monadnock Children’s Food Access Alliance (MCFAA), is working to do just that, using the findings of its latest report to develop a food access plan to fill gaps in local and federal programming.

“ ... A society that supports the individual to be their healthiest will see less sickness, less hunger, less addiction,” said Roe-Ann Tasoulas, director of the Monadnock Farm and Community Coalition. “Its just common sense.” 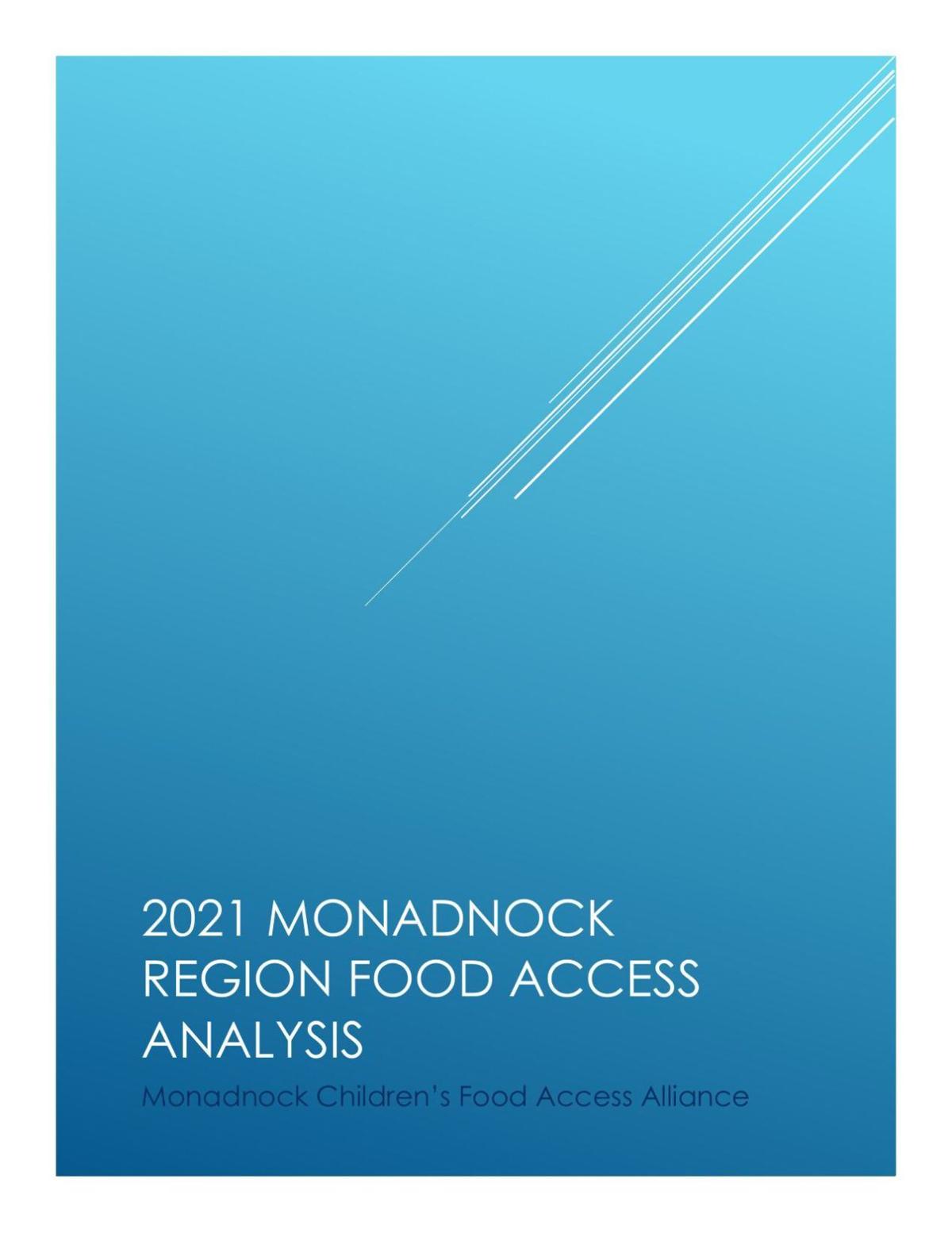 The 80-page Monadnock Region Food Access Analysis was conducted by the Southwest Region Planning Commission this spring. MCFAA will use the findings of the report, which was published in July but given to The Sentinel last week, to address the highlighted issues in coming years.

The alliance — funded by a $20,000 grant from the nonprofit N.H. Children’s Health Foundation — was created by similar local coalitions, Healthy Monadnock and the Monadnock Farm and Community Coalition (MFCC), to address and improve the overall health of families and children in the Monadnock Region.

“MFCC has monthly work groups that meet, and our work group was originally ... about educating on the importance of eating local food and the benefits to the environment, but it morphed into food access,” Tasoulas said. “Before the pandemic, we found out that ... these nutrition programs were being underused and we wanted to find out why.”

Food insecurity is the disruption of food consumption or eating patterns because of a lack of money or other resources. It can cause several negative health outcomes, such as decreased nutrient intake, poor oral health, behavioral problems, asthma, greater risk of hospitalization and developmental problems.

In Cheshire County, the report says 9.5 percent of residents and 12.7 percent of children were food insecure, according to 2019 data from Feeding America, the most recent data available from the national food access organization.

Both rates are higher than the state’s average in 2019 of 8.8 percent for adults and 10.8 percent among kids, the report says.

Poverty is the number one risk factor for food insecurity, the report says, with a lack of transportation — specifically lack of a vehicle — a close second.

Childhood poverty rates in the Monadnock Region are the highest in Alstead, Hinsdale, Richmond, Stoddard and Winchester, according to the report.

Alstead is also one of five area towns with the highest percentages of households without vehicles. The others are Keene, Peterborough, Sullivan and Swanzey, the report shows.

But despite these high rates, eligible families aren’t applying for local or federal assistance programs. More data are needed to understand why, the report says, but Tasoulas said it’s likely because of the stigma surrounding asking for — and accepting — help.

“In our listening sessions [for the report] we heard numerous times ‘Others need it more than me/or our family.’ Clearly, there is a cultural component to this ‘I can’t make it on my own’ attitude,” she said.

The pandemic has only added to this, Tasoulas said, because people could receive money in other ways.

“Unemployment and [federal] stimulus checks have put food on the tables of many experiencing food insecurity,” she explained. “The increase in sign-ups for nutrition programs has been slight.”

And for some low-income households, federal benefits such as food stamps aren’t an option, making it much more difficult to buy food, the report says.

Feeding America’s data show 40 percent of food-insecure children in Cheshire County who are at or below the federal poverty line did not qualify for such assistance in 2019 because they didn’t meet all the requirements, such as having under $2,001 in their bank accounts. This is the same rate as reported across the state.

Hillsborough County — which includes the large cities of Nashua and Manchester — also saw a rate of 40 percent, the data show, while Sullivan County was lower at 27 percent.

These include working collaboratively with the N.H. Department of Health and Human Services to sign up more residents for food stamps (SNAP benefits) and the women, infants and children (WIC) nutrition program; launching an outreach campaign to increase awareness of such programs; expanding community transportation services, such as through volunteer driver programs or transit services; and making farm-fresh foods available in more locations.

The report — along with input on how to address its findings — will be outlined Tuesday during a virtual event from 5:30 p.m. to 7:30 p.m., according to a news release from Tasoulas. To register, visit monfoodaccessforum.eventbrite.com or call 603-852-3198.

A recording of the forum will also be uploaded afterward to mfcommunitycoalition.org.

The alliance then plans to determine the five most effective projects to help with food access, Tasoulas said. By the end of 2021, she said the alliance will secure funding for three of those projects, with hopes of implementing them the following year.

The remaining two projects are slated to receive funding in 2022, she added.

Until then, Tasoulas said it’s important for community members to come forward if they need assistance.