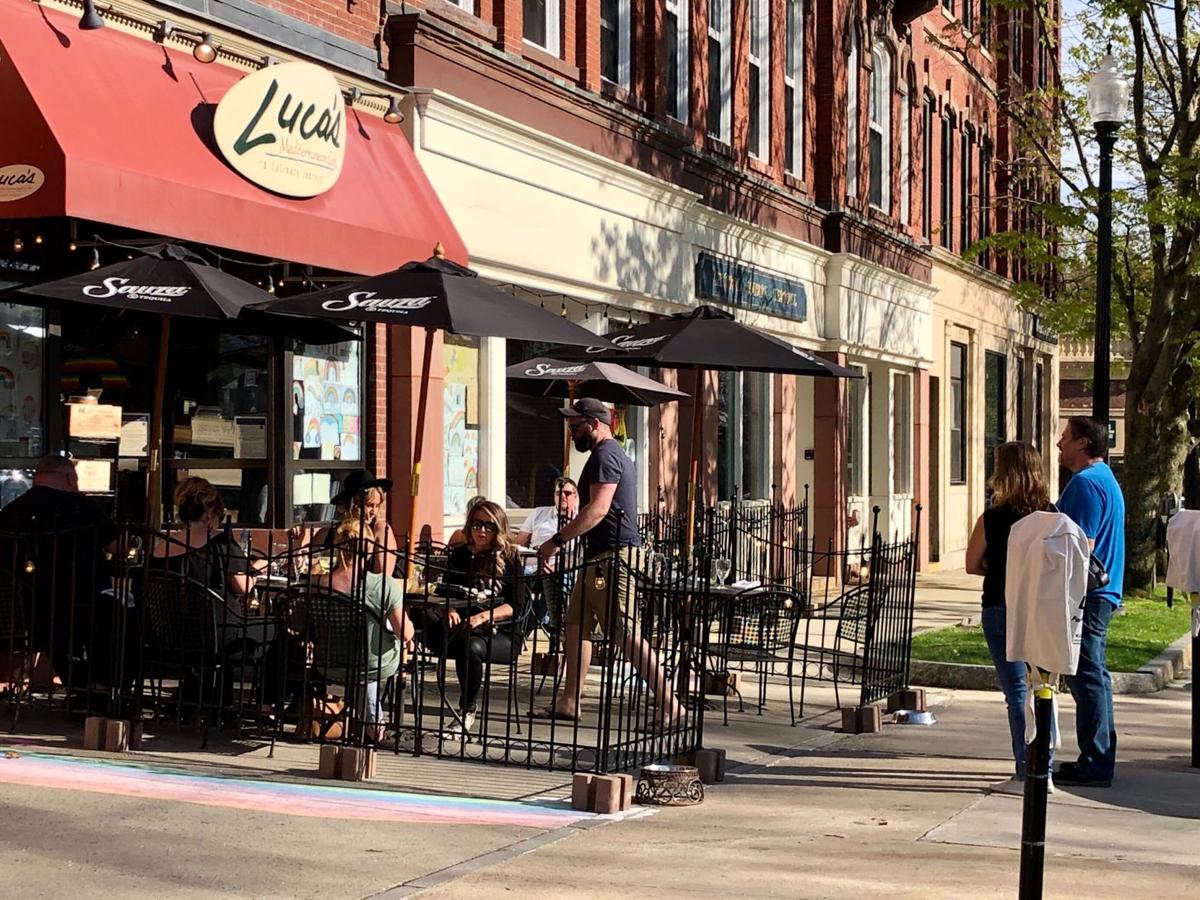 Patrons at Luca’s Mediterranean Cafe in Keene Monday took in the nice weather, along with the easing of recent restrictions on in-person dining. 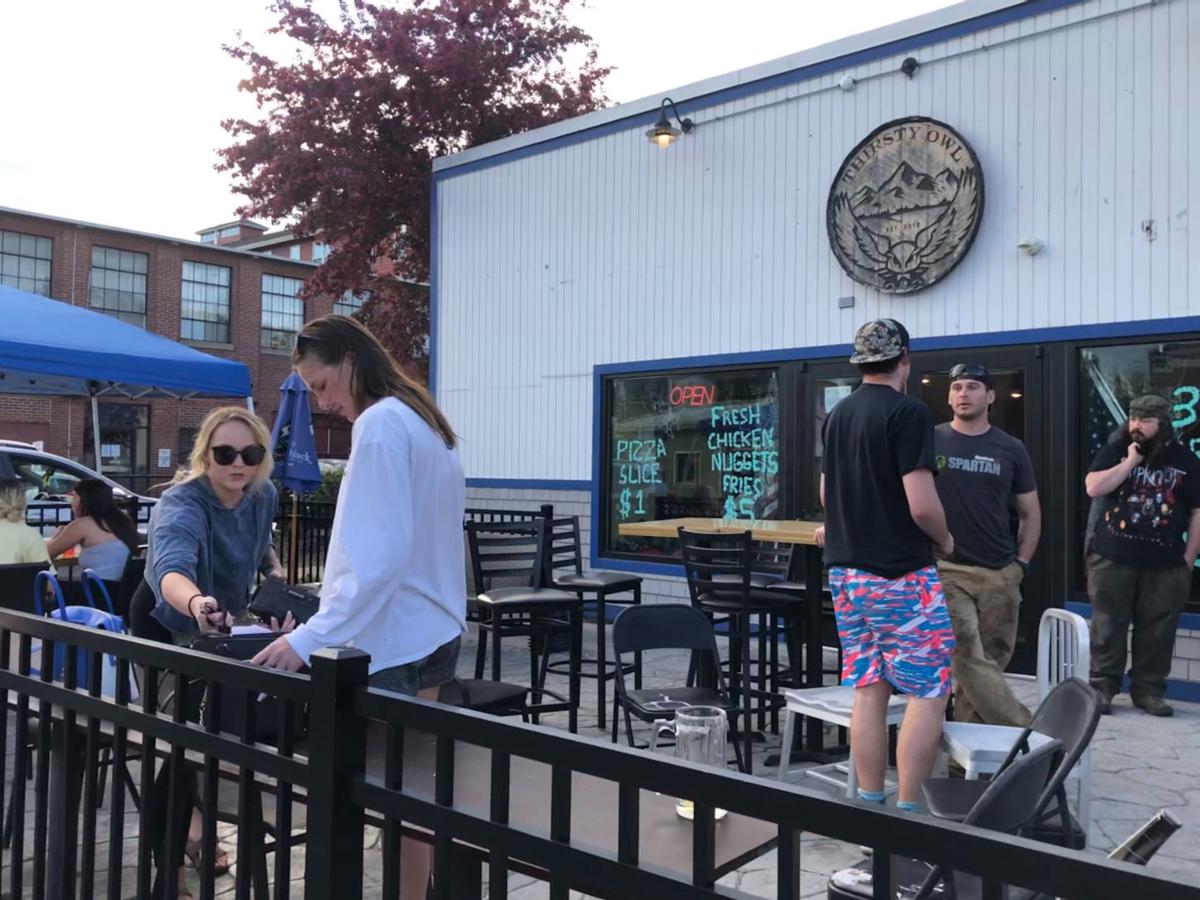 Among area establishments that drew patrons Monday was the Thirsty Owl on Winchester Street in Keene.

Patrons at Luca’s Mediterranean Cafe in Keene Monday took in the nice weather, along with the easing of recent restrictions on in-person dining.

Among area establishments that drew patrons Monday was the Thirsty Owl on Winchester Street in Keene.

Area residents took advantage of Monday’s mild weather to patronize restaurants and bars, as New Hampshire eateries began to resume outdoor service after more than two months of restricted operations due to the COVID-19 outbreak.

With many citing cabin fever after being stuck indoors since March, diners in Keene said they were just happy for a chance to go out and do something. Others said they were glad that local businesses had this opportunity to start getting back on their feet. Restaurants across the state either closed or curtailed operations after Gov. Chris Sununu issued an emergency order in March limiting them to take-out or delivery service.

At Luca’s Mediterranean Cafe on Central Square, the patio was already bustling by 5 p.m. Gail and Robert DeRosa of Keene said they were just pleased to be out of the house. As for whether they had any concerns about gathering in a public place with others, they said they weren’t too worried about it.

“As long as you keep the social distance and keep your hands clean, I think it’s OK,” Gail DeRosa said.

Restaurants recently learned they would be allowed to resume outdoor service starting Monday, nearly three weeks after Sununu announced the first few steps toward reopening the economy. Other sectors that have been allowed to reopen include hair salons, retail shops and drive-in theaters.

Luca’s wasn’t the only downtown restaurant to open its patio Monday.

Local Burger and The Works Café, both on Main Street, also had patrons eating al fresco. The Stage and The Pour House, on Central Square, both had tables and chairs piled up outside their buildings but weren’t yet set up for customers.

Zoe Millette, an employee at The Works, said the café had seen a steady stream of business on Monday, with customers anxious to enjoy a meal outside. Millette said The Works, which specializes in breakfast foods, had been busy all day.

She noted that the restaurant has been doing well with its take-out model and recently started using Door Dash to deliver orders, so money hasn’t been a huge concern. But by 5:30 p.m., she said sales were up dramatically after just one day of the patio’s being open.

“We’ve had so many people come in,” she said, adding that the warm weather likely contributed to the influx of customers.

But it wasn’t just Main Street restaurants that attracted guests eager for a chance to get outside. The patio at the Thirsty Owl on Winchester Street was busy with several groups of friends.

Keene State College student Kayla Grech, who just finished her junior year, said it was nice to be able to go outside and have a drink with a friend. The Connecticut native said she was glad that New Hampshire had relaxed restrictions a bit more than her home state has.

Jess Kelly, a recent Keene State graduate who was also at the Thirsty Owl, said she’s glad local restaurants were able to reopen in some capacity, and she hopes this will help alleviate some of the financial hardship many have been experiencing during the pandemic.

She also commended the bar for strictly enforcing its requirement that face masks be worn whenever a guest has to come inside, such as to use the restroom.

Kelly said that while helpful, efforts to support businesses that have been closed — like Bulldog Design’s Great Grey Tee Project, which raises money for area companies through the sale of T-shirts bearing their logos — wouldn’t be enough to keep them going long term. She hopes allowing them to reopen partially will help.

“Keene is mostly made up of local businesses,” she said, adding that they don’t have the same income as large corporations to help them weather the closures. “So we came out to support them, even if it’s just on the patio ... we don’t want Keene, as a community, to shut down.”