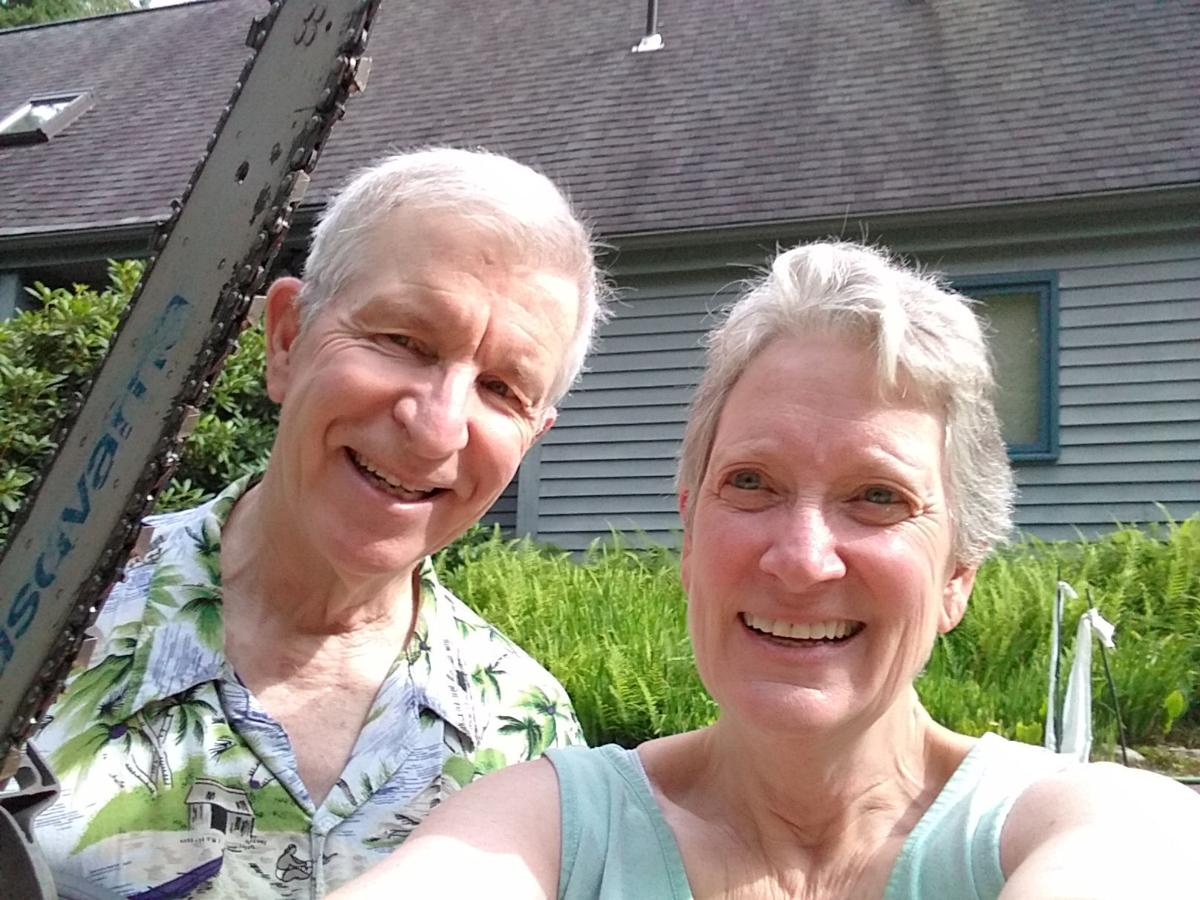 Tim Clark and his wife, May, with their chainsaw in a photo she said went with a story she wrote for the Dublin Historical Society. In it, she recounted how she and her husband were attacked by yellow-jackets when they first moved in and were clearing their land. 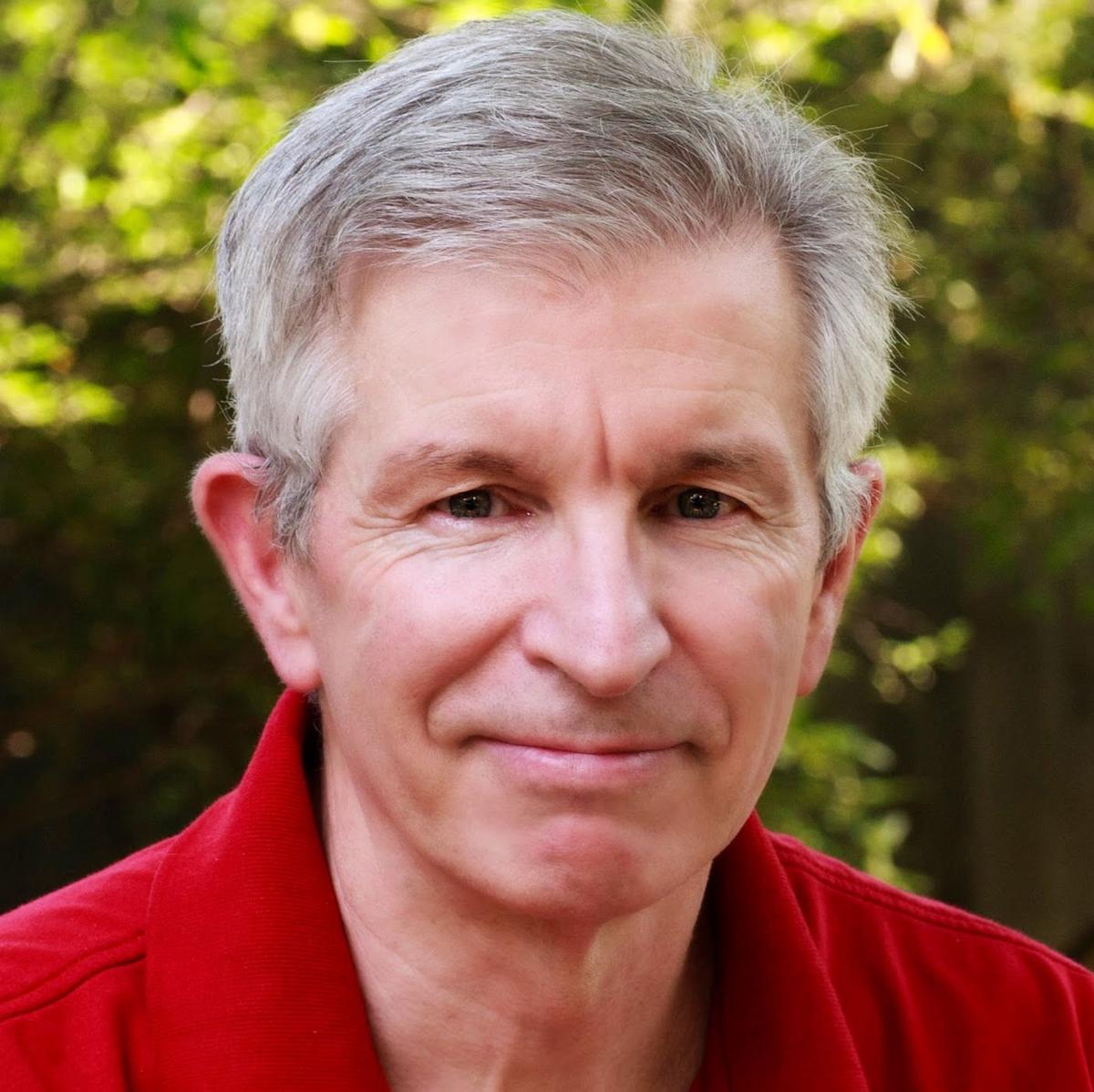 DUBLIN — When considering Tim Clark’s life, it’s the small moments people have remembered — a thoughtful comment here, a kind gesture there — that, when all pieced together, reveal a portrait of a man who was humble, compassionate and fully engaged.

It was supposed to be a double blind date of sorts — except everyone involved already kind of knew each other, and the couples parted ways early in the evening.

Clark had agreed to set up Sarah, his future wife May’s college roommate, with a fellow from the drama program. In return, Sarah set up Clark and May.

Clark had a fireplace in his suite at Harvard, and the pair spent the evening walking around Cambridge, looking for scrap wood to burn and chatting in the dorm.

For the next half-century, Tim and May Clark would celebrate Nov. 6 every year.

“I count myself as incredibly lucky,” May said, “to have had 51 years with my very best friend.”

May enjoys gardening, Tim enjoyed picking the vegetables. He wrote, and she was his first reader. They read aloud to each other — “The Brothers Karamazov,” “War and Peace” and most recently, “Moby Dick.” They suited each other in a way that everyone could see, even in the early days of their relationship, May said.

“We were both pretty much kids when we met,” she said. “And we were both pretty clueless. But somehow, some way, we knew it was important for us to be together, so we just made it work with whatever came our way.”

Over those five decades, the couple moved from Boston to Alstead to Concord to Hopkinton to Lee to Dublin. They had three children together — Liza, Dan and Joel. Tim Clark’s career included stints in TV and radio, more than 20 years at Yankee, and 13 years as a ConVal English teacher.

One day shy of his and May’s 51st anniversary, on Nov. 5, Clark died of a stroke. In addition to his work with ConVal and writing for Yankee Magazine and the Old Farmer’s Almanac, he is remembered as an active member of the Dublin Community Church and as a public servant in his nearly two decades as town moderator.

“The most important thing to say is that he was really happy with his life,” May said, noting how much he loved being a father.

The love Clark had for his family was made plain for others to see, too.

Moore, who joined the English department in 2010, said Clark was one of the first people she met when she took the job. He introduced her to colleagues and gave her a tour of the school.

Nearing retirement, Clark was handing off the school’s theater program to Moore. He showed her to the auditorium — in all its faux-wood-paneled glory, a far cry from the brand new high school Moore had previously taught at. It reminded her of her parents’ basement growing up. But that’s not what Clark saw.

“And this is the gem of ConVal High School,” Clark said as he ushered Moore through the doors. And with that, she felt it too.

“The way he loved [that theater] was infectious,” she said.

Clark also gave Moore a tour of Peterborough, joyfully noting where a Friendly’s once stood 20 years earlier and which building housed the library in the 1800s.

“To see things through Tim’s eyes was to love everything,” she said.

Lisa Carne, who joined the ConVal English department in 2005, remembered feeling intimidated in the interview with a panel of ConVal faculty when she was applying for the job. But, fortunately, Clark was on that panel.

“And Tim just smiled at me. He was the first one to kind of break the ice,” Carne said. Clark asked her to describe a challenging student she’d had success with.

“And in that moment he opened the door for me to feel confident,” she said. “And I could tell that he wanted that for me.”

Clark was a storyteller, a prolific writer by anyone’s account. With his long career at Yankee, his storytelling legacy lives on in ink and paper. But it was perhaps the way he used those skills that are most memorable.

“Students love nothing if not a good story or the opportunity to share their stories,” Moore said. “I think that students would tell you that his presence in the classroom — both as someone who is genuinely interested in and cared about their lives and thoughts and ideas, plus what then he was able to give back and share with them about his experience — was really something special.”

And it wasn’t just young people who felt enlightened.

“The way he inspired his students, he also inspired me,” said Volkert Volkersz, who writes a weekly newsletter as program coordinator at the Dublin Community Center.

Clark was a reliable presence at the center, Volkersz said, participating in forums to answer questions about local government or showing up to listen to speakers.

Volkersz recalled a time when Clark’s son, Joel, presented a Moby Dick board game at the community center. Joel was the creative director for the game, and his parents sat in the crowd, beaming.

A separate occasion, one of Clark’s former students, Colin Isotti, a flamenco and classical guitarist, performed at the community center. It was a show Clark especially enjoyed, according to Volkersz.

“He was just beaming to see one of his former students become a star in this world of music,” Volkersz said. “He just loved to see his student thrive.”

Mary Loftis, who met the Clarks through the Dublin Community Church 30 years ago, participated in a community book group with Tim Clark for the past 10.

He was well-read and very smart, Loftis said, always able to provide some historical or literary context to supplement whatever book the group was reading — but never in a condescending or patronizing way.

“He had this amazing ability to affirm other people’s contributions,” Loftis said. “You always sort of felt like, ‘Oh, I said something smart.’ ”

Beyond his intellectual offerings, Clark was entertaining to be around, Loftis said. The reading group has been working through “This Is Happiness” by Niall Williams — a novel set in Ireland — and Clark, drawing on his theater background, would read excerpts in an Irish brogue.

Dublin Town Clerk Jeannine Dunne said he could bring a bit of joy to just about anything — even Town Meeting.

She cited minutes from the most recent annual session, which was hosted drive-in style due to the pandemic:

“While the votes were being counted by our ‘runners,’ Clark mentioned that someone had suggested this week that he should bring a pair of binoculars to this unusual Town Meeting but he was afraid that he might get distracted by a Yellow-bellied Sapsucker.”

“The main reason I looked forward to working Saturdays on Town Meeting days to take the minutes was because I knew that Clark would come up with some funny sayings or jokes related to whatever we were talking about,” Dunne said in an email.

It’s difficult to put into words the entirety of who Tim Clark was and the lasting impact he’s had on those who knew him. But Carne, his former ConVal colleague, perhaps comes close.

“He was a perfect storm of wonderful sense of humor, brilliant, compassionate, [and] non-judgmental,” she said. “He’s someone to emulate for sure.”