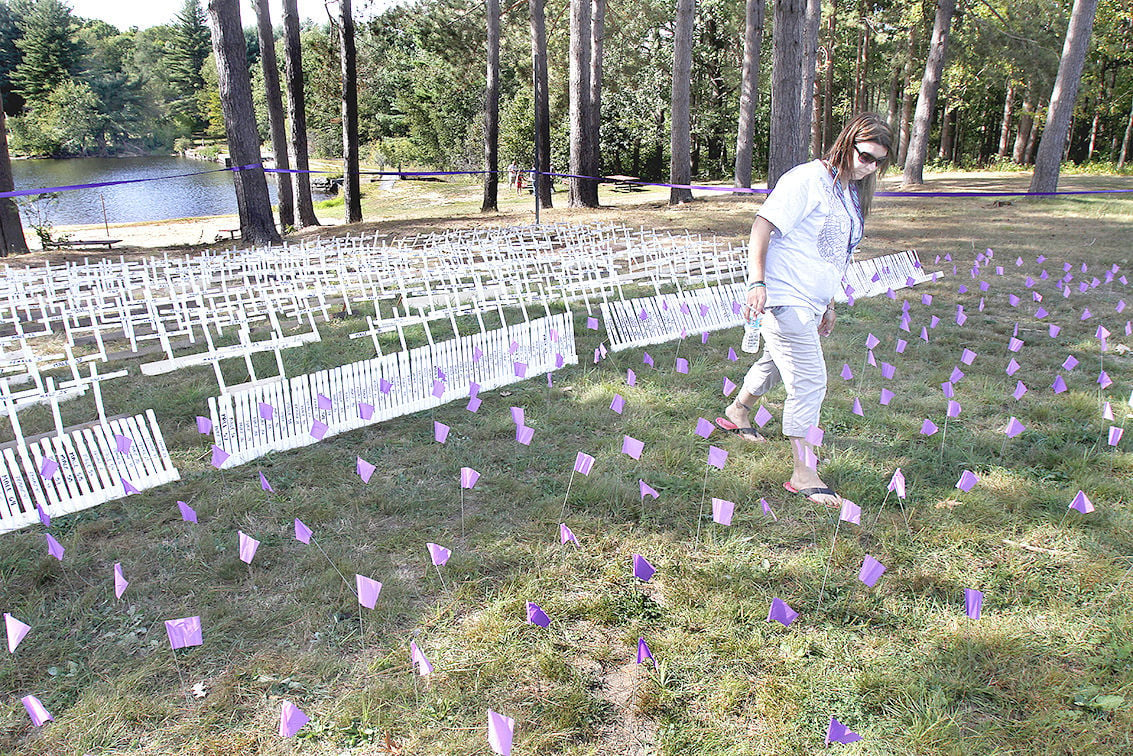 Jessica White of Keene, co-founder and leader of Keene Hates Heroin, walks amidst an installation at the “Live Free” rally held at the Community Center in Troy last September. The installation had crosses, sticks and flags representing nearly 1,000 actual and projected drug-related deaths for last year and the year before in New Hampshire. State records show that 439 people are known to have died in the Granite State from drugs in 2015. The projected total for 2016, which is still pending completion of toxicology testing as of earlier this month, is 478. 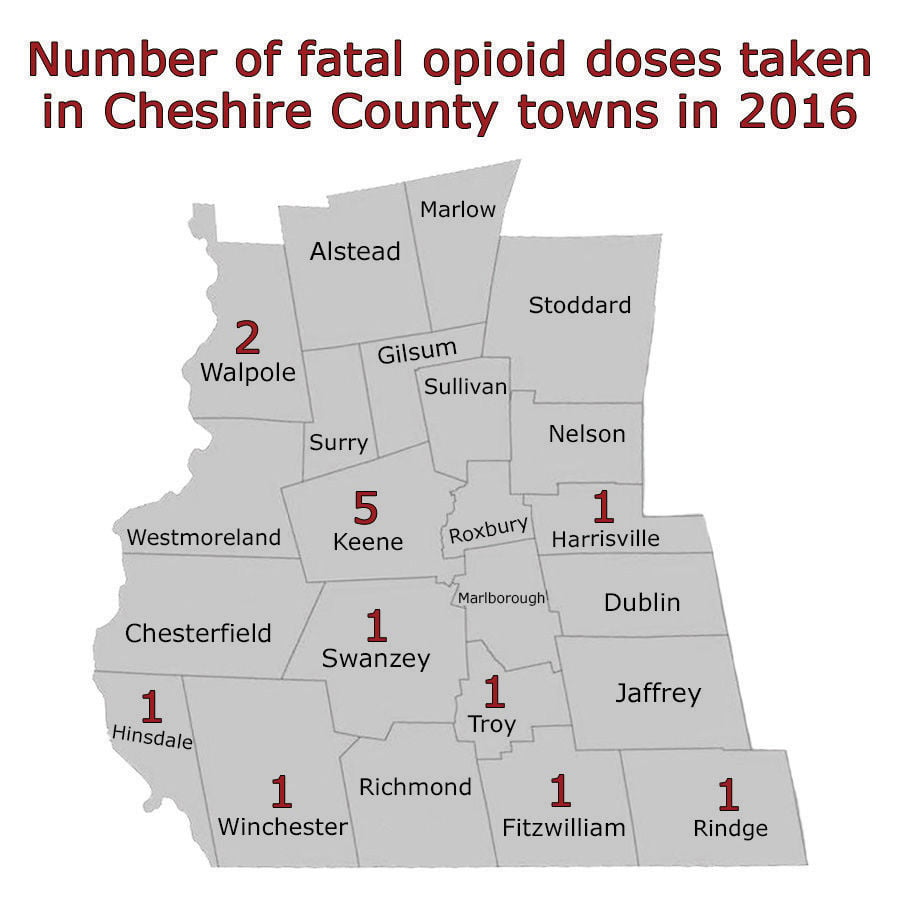 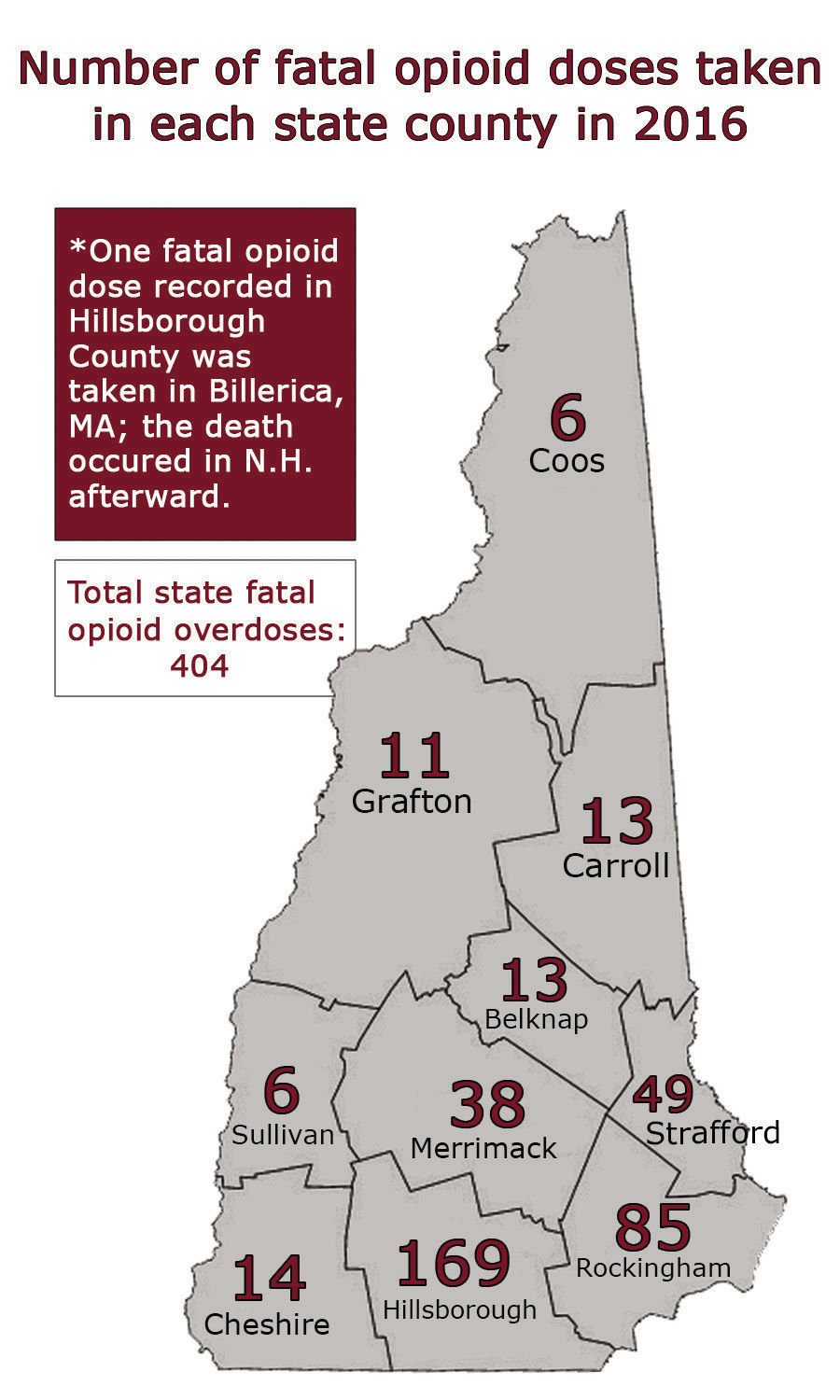 On Jan. 4, 2016, in Fitzwilliam, heroin and fentanyl, used in combination, took a life.

On April 26, in Rindge, someone died after taking a mix of fentanyl, morphine and oxycodone.

And on May 29, in Swanzey, a cocktail of oxycodone, cocaine and diazepam led to yet another death.

Fueled by a statewide opioid crisis, the number of confirmed fatal drug overdoses last year in New Hampshire is predicted to hit a high of 478, once officials finish investigating all the cases.

But while data tracking the number of drug deaths in the state in 2016 has been widely circulated by the N.H. Office of the Chief Medical Examiner, data showing where these overdoses happened have not.

Records obtained through a public information request to the office provide a deeper look at the toll drug abuse has had on communities in the Monadnock Region and beyond. Specifically, what drugs killed people, and where those drugs were taken.

Of the 404 people who died after taking opioids — a class of drugs that includes heroin, fentanyl and oxycodone — in 2016, 14 people took the drugs in Cheshire County, records show.

These records, however, are incomplete, as the state medical examiner’s office continues to investigate last year’s overdoses. As of March 8, confirmation of 22 potential drug deaths from 2016 was pending toxicology results.

The Office of the Chief Medical Examiner’s data reiterate that fentanyl, a synthetic opioid that can be up to 100 times stronger than heroin, was behind most drug deaths last year. Of the 404 fatal opioid overdoses that had been confirmed as of March 8, fentanyl used either alone or with other drugs had caused 319 deaths.

But the records also point to other drugs that are killing people while garnering less media attention.

Methadone — an opioid medication prescribed to quell the withdrawal symptoms from heroin or other narcotics — caused more deaths than heroin when the two drugs were used on their own; when not mixed with other substances, methadone was ruled as the cause of seven deaths in New Hampshire last year, while heroin caused three.

“Nobody’s talking about (methadone abuse) anymore. ... Fentanyl completely wiped out thinking about the other drugs because the numbers are just so huge,” Kim Fallon, New Hampshire’s chief forensic investigator, said.

Fallon provided additional documents, which show that in 2007, 2009 and 2010, methadone, used alone, led to more fatal overdoses in New Hampshire than any other single drug. Heroin was the most fatal drug in this category from 2011 through 2013, according to the documents.

But despite its role in fueling the opioid crisis, heroin is now causing fewer deaths than it once did.

Used alone or with other substances, the drug caused 29 fatal overdoses in the state last year.

Cocaine combined with opioids caused 47 deaths. The records show cocaine most commonly led to fatal overdoses when it was mixed with fentanyl. This happened 41 times in 2016, the records show.

Locally, cocaine used with opioids led to three deaths last year. In addition to its role in the fatal overdose in Swanzey on May 29, cocaine was also at play in a death stemming from an overdose in Troy on March 23, when someone took the drug with heroin. And in Keene on June 24, someone took a deadly dose of fentanyl, cocaine, heroin and acetyl fentanyl, a fentanyl analog.

When people buy drugs laced with fentanyl, they’re usually not aware of it, according to Keene Detective Lt. James F. McLaughlin.

And when dealers mix fentanyl with other drugs, like heroin, it’s easy for them to do so poorly, which can yield highly concentrated, deadly doses.

“You could very easily get all fentanyl or all heroin in a batch that was supposed to be cut,” he said.

According to the state’s records, 168 people died last year from taking opioids in Hillsborough County — the most of any of the state’s counties. This was followed by Rockingham County at 85 and Strafford County, where 49 people took deadly doses.

The records track the towns and cities where fatal doses of drugs are taken, but not where those who suffer fatal overdoses die. That’s because about one third of people who fatally overdose in New Hampshire are taken to hospitals in communities other than where they took the drugs, Fallon said.

“We didn’t think it was helpful to track where they died when they’re dying in a hospital and it’s in a different town and different county from where they took the drug,” she explained. The office keeps track of the locations of all the drug deaths it investigates in a separate database.

The number of fatal opioid doses in each county tends to correlate with the county’s population. In addition to having the highest numbers of fatal doses, Hillsborough County and Rockingham County are the two most populous counties, with 407,761 and 303,251 residents respectively, according to 2016 U.S. Census data.

The state’s smallest counties, Sullivan and Coos, each saw six people take fatal opioid doses, the fewest of any counties.

In Rindge, which has a population of about 6,000, one person took a fatal opioid dose last year.

Police Chief Todd Muilenberg said although overdose death rates are concentrated in larger towns and cities, he believes overall impact of the opioid crisis is proportionally the same in all of New Hampshire’s communities.

But in a town like Rindge, a rural, bedroom community where homes are spread out and there are few public gathering places, addiction is less visible, he said.

Because police have responded to several overdoses in the past several years, this month, Rindge officers plan to become certified to carry Narcan, a drug used to revive people overdosing on opioids, in their cruisers, according to Muilenberg.

It’s too early to tell if the number of fatal overdoses in New Hampshire this year will match 2016’s still rising number.

Early data released by the office on March 8 show that so far in 2017, there have been 14 confirmed drug deaths, 12 of which were caused by opioids. Another 53 cases were pending toxicology results.

“We’re not starting off well,” he said.