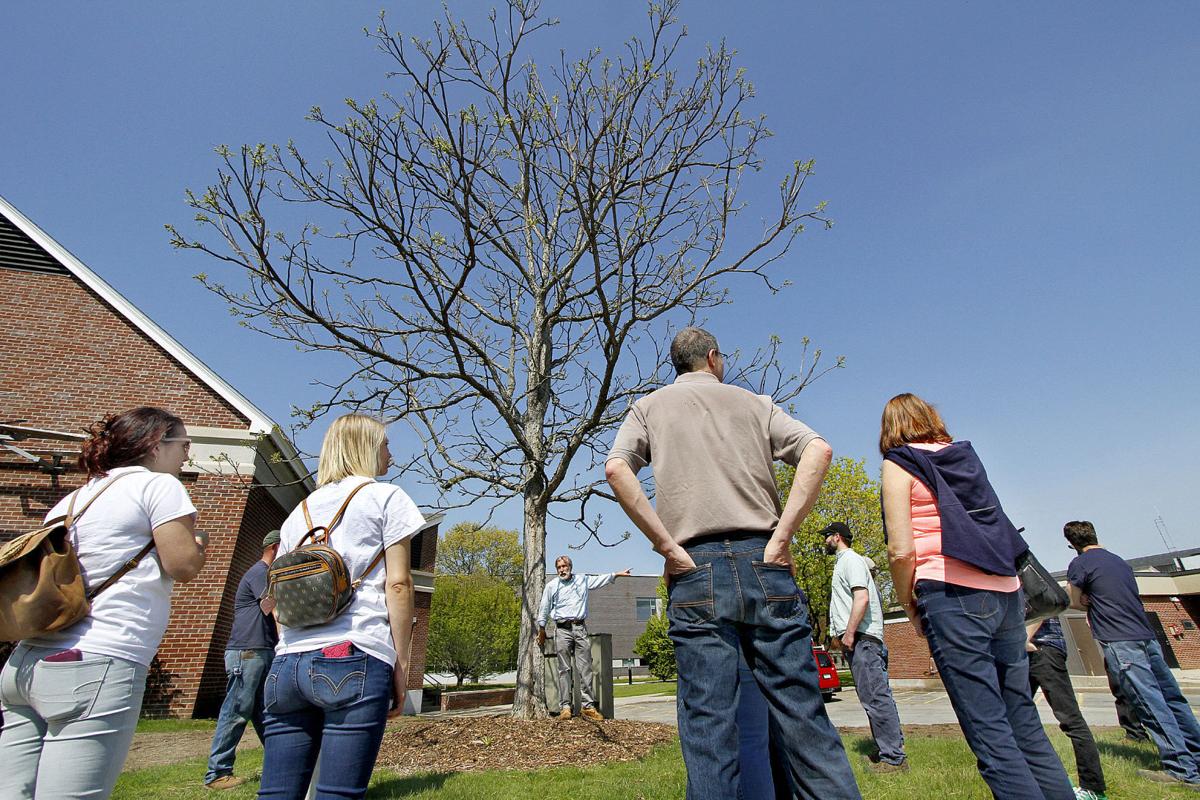 Bud Winsor helps celebrate Keene State College’s Founders Day in this file photo from 2017 by taking staff members on a tour of more than 35 of the college’s tree specimens. Here, Winsor offers information about this Kentucky coffeetree outside the Thorne-Sagendorph Art Gallery. 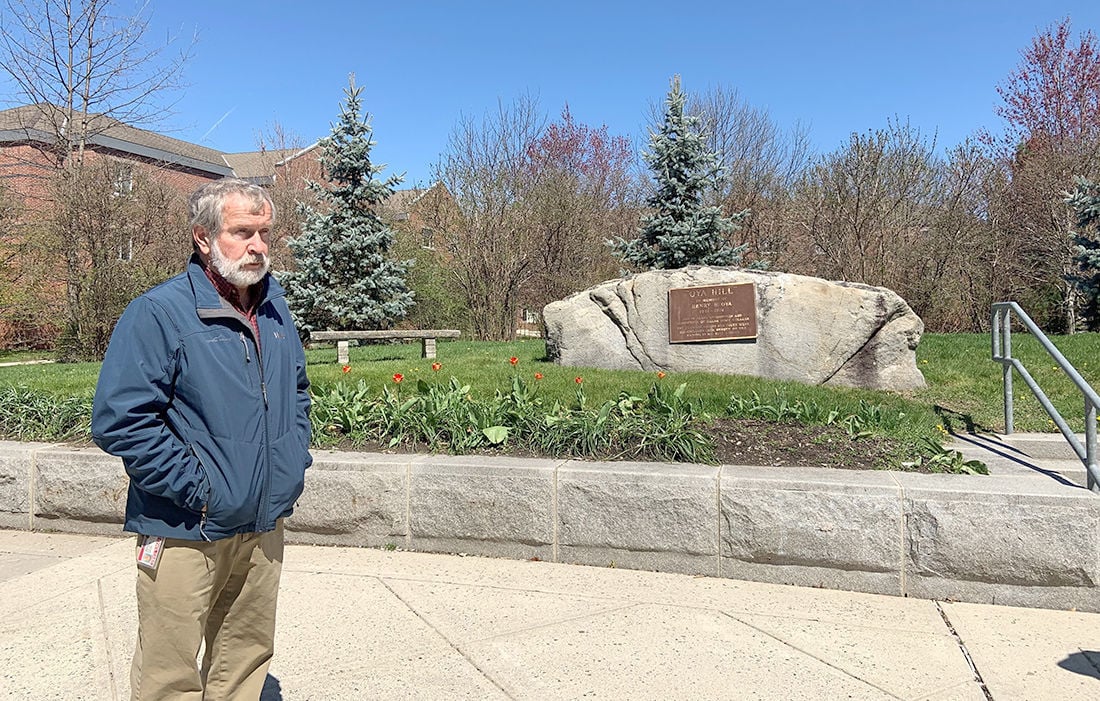 Famed for his tours of campus trees, Bud Winsor is retiring as head of the grounds department at Keene State College.

Bud Winsor helps celebrate Keene State College’s Founders Day in this file photo from 2017 by taking staff members on a tour of more than 35 of the college’s tree specimens. Here, Winsor offers information about this Kentucky coffeetree outside the Thorne-Sagendorph Art Gallery.

Famed for his tours of campus trees, Bud Winsor is retiring as head of the grounds department at Keene State College.

Every tree on the Keene State College campus has a story, and Arthur I. “Bud” Winsor knows them all.

In fact, many of those trees were planted under his watch as the college’s assistant director of physical plant/grounds.

So when he retires on July 31 after 27 years of overseeing Keene State’s outdoor operations, his legacy will literally be in the landscape. It will also be in a digital recording of his famed campus tree tour.

The video, which was recorded a week before what would have been Keene State’s graduation ceremony on May 9, debuted online May 14, in time for the college’s annual Founders Day celebration honoring staff. Traditionally, Winsor has given a tree tour during the event.

“The most exciting thing of working with the trees is the way students seem to enjoy hanging out on campus either underneath the shade tree or playing Frisbee on an athletic field,” Winsor said in the recording, which was produced by student Benajil Rai of Nepal.

He added that it’s not just he and the current building and grounds staff who deserve the credit for the campus’s upkeep, but those who came before them.

“We’re the stewards of this, and when maintaining it, people before us did an incredible job. Now it’s up to us to try to keep it going,” he said. “I feel that’s our mission, to make Keene State a beautiful place for people to enjoy.”

Joining Winsor in giving the tour was campus gardener Joseph Britton, who will take on Winsor’s position on an interim basis until college officials determine how the institution will proceed.

“We’re going to miss him,” Britton said by phone Tuesday. “He is the man.”

He added that the positive attitude Winsor brings to work daily is uplifting to members of the grounds crew and anyone he encounters. He’s also really big on organics, preserving the environment and having a self-motivated team, Britton said. And all of this was important to Winsor before sustainability became a pop-culture term, he noted.

“He’s very knowledgeable and very passionate about what he does, and that really helps everyone on the crew to really be inspired to do a better job,” Britton said in the video.

Winsor, 67, of Swanzey, began working as head of the grounds department at Keene State in 1993. Before that, he taught horticulture at the Cheshire Career Center at Keene High School for 15 years. During that time, he first ran a greenhouse and then sold it to start up a garden center.

His role at Keene State has included not only overseeing the landscape of the campus and the upkeep of its buildings but also trash removal, snow clearing, athletic field maintenance and event preparation, including commencement.

Besides being a big day for graduates and their friends and families, commencement coincides with the blooming of flowers and trees on campus, showcasing its natural beauty and the hard work of staff, Britton said.

Due to the COVID-19 pandemic, Keene State has postponed the annual ceremony to October. And while this is disappointing for grounds staff, it has been particularly so for Winsor given this is his last year, Britton said.

“He was really sad this year we couldn’t do graduation. He considers it the grounds crew’s world series,” Britton said.

Keene State President Melinda Treadwell said in a statement Tuesday that Winsor’s steady leadership, positive outlook and kindness are hard to describe and impossible to summarize:

“He has had a profound impact on our campus and community — not only does he make our campus beautiful and enjoyable for everyone, he also helps our students feel like they are home. Though he is retiring, he will remain a special part of our community. We will miss him greatly.”

Winsor began working at Keene State when the college was undergoing a transformation. It was a time of growth and rejuvenation for the campus that included the transition of Appian Way — the main thoroughfare through campus — from an active roadway to a pedestrian mall.

“It was a good time to work here,” Winsor recalled in a phone interview Tuesday.

While a lot of things were changing on the college campus, in line with the master plan, trees remained an important part, he said. Jay Kahn, who was the vice president of finance and planning at the time, made sure every building that was constructed on campus was landscaped properly, Winsor said.

“So many trees went in during this period. It was a great time to be a part of the grounds team, as it seemed like trees were arriving daily,” Winsor said. “It was a busy time, but now those trees are over 20 years old, and are really starting to make the college campus look more like a college campus.”

While Winsor has come to lead the campus tree tours over the years with arborist Jeffery Garland and then Britton, he said the seed was planted by a group led by Judith Schwartz. Schwartz, who taught biology at Keene State, produced a book in 1996 about the campus’s trees. After Garland was hired as the college’s arborist, Winsor said they went to the alumni association to ask for more funding to update the tour book.

It began, he said, when he first started working at Keene State, and his son’s second-grade teacher at Mount Caesar Elementary asked if he could lead them on a walking tree tour of the campus. He agreed, and over the years those tours grew to include other school groups, college classes and local organizations such as gardening groups, he said.

At 67 — and with his wife, Kathleen, about to turn 65 — it’s the right time to retire, he said. With daughter, Gail, living in Virginia, and son, Jeff, in Arizona, the couple is all set for the winter months.

But in the meantime, Winsor said, he’d like to do some landscaping work on his own property on Swanzey Lake and enjoy some time at home with his wife.

He is proud of the work the grounds crew has done at Keene State, he said, and is confident the operation will be in good hands when he retires.

“It’s not a job; it’s sort of a calling. You enjoy doing it every day, and that’s the type of people you have,” he said.

Asked about the legacy he hopes to leave at Keene State, Winsor paused before answering. He hopes it’s that the “simple things make a difference.”