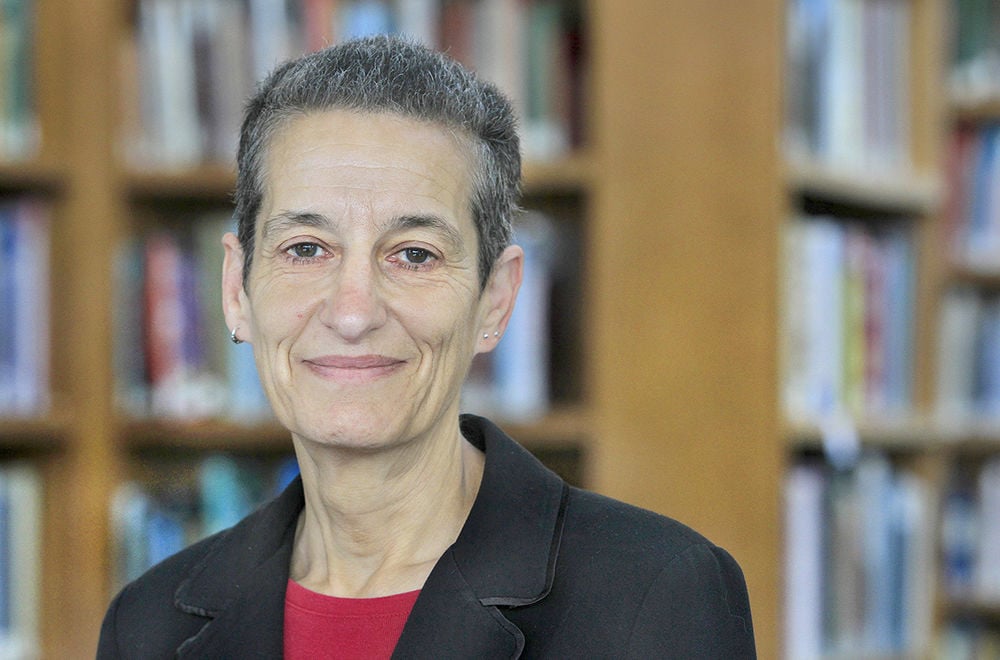 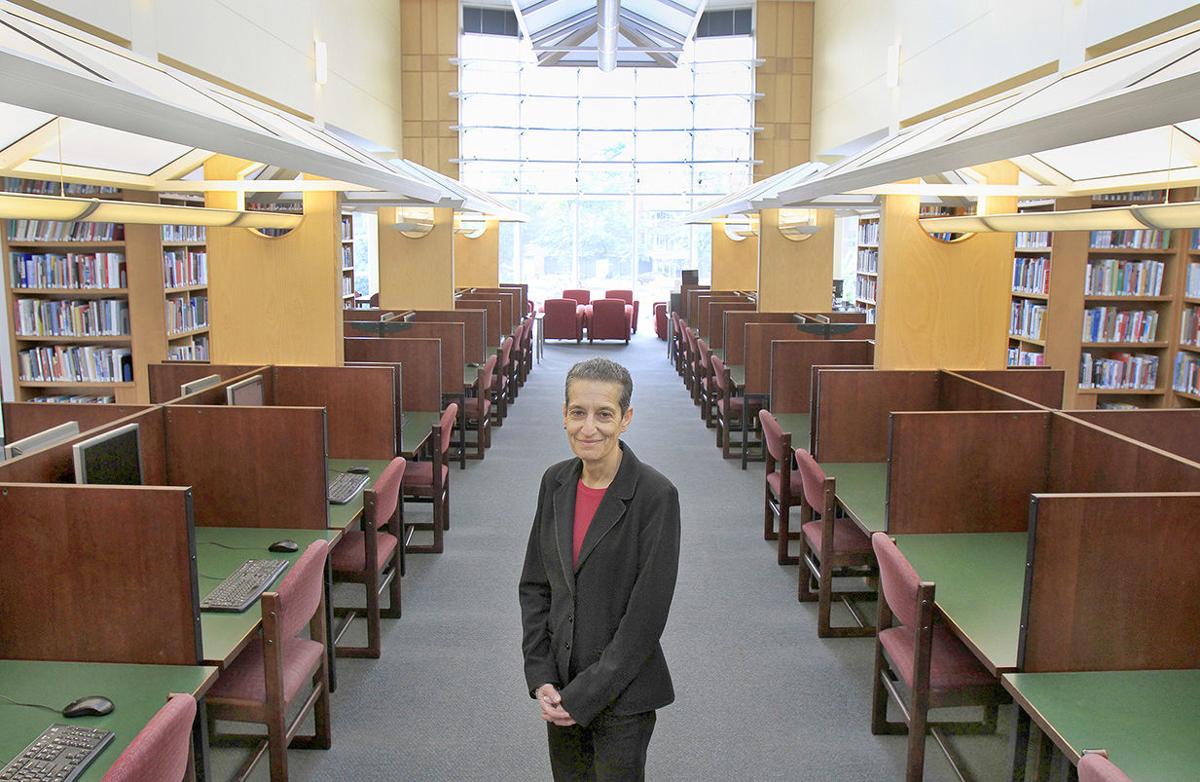 Celia Rabinowitz, on the second floor of Keene State College’s Mason Library Friday, is dean of the library and is also one of two interim co-directors of the college’s Cohen Center for Holocaust and Genocide Studies.

Celia Rabinowitz, on the second floor of Keene State College’s Mason Library Friday, is dean of the library and is also one of two interim co-directors of the college’s Cohen Center for Holocaust and Genocide Studies.

A pivotal moment in Celia Rabinowitz’s life came while studying in Jerusalem in 1982.

Tucked behind a desk in the Ecole Biblique, she was sifting through third-century texts while sitting across from a monk, who had other business to attend to. The quiet was punctured at the strike of noon, with the Dhuhr prayer ringing out from a nearby mosque.

This cinematic multicultural moment she found herself in may not have happened were it not for what was, at the time for her, an uncharacteristic choice: spending a spring semester as an undergrad living on a kibbutz.

“I don’t think I was the most adventurous teenager,” says Rabinowitz, 62, now one of two people running the Cohen Center for Holocaust and Genocide Studies at Keene State College. “And finishing up college and doing that on my own, and stepping on a plane, and stepping off that plane in, you know, another country where people spoke a completely different language was very transforming for me.”

From her seat in the translucent lobby of the new Cohen Center building — which she helped plan and design — Rabinowitz weaves the tale of how she ended up as co-interim director of the center, which finds itself questioning how it can best fulfill its mission in 2019: “To remember … and to teach.”

Rabinowitz has done a fair amount of teaching in her career — two of her four degrees are a master’s in Hebrew studies from The University of Jerusalem and a Ph.D. in historical theology from Fordham University in New York City — but she has also spent much of it running libraries.

A master’s in library studies from Rutgers University in New Jersey is what led her to Keene in 2014 after working as a librarian and fill-in professor at St. Mary’s College of Maryland.

In addition to her role at the Cohen Center, Rabinowitz is dean of the Mason Library at Keene State. Her first job was working at a library in her hometown of Mount Kisco, N.Y., just an hour north of New York City.

Her late father, Jerry, was a musician, and her mother, Alice, is a longtime theater steward.

Rabinowitz says she was lucky to have parents supportive of non-utilitarian interests — such as the classics and religion studies — but adds that it was her time on the kibbutz and learning from other students in Israel that really pushed her out of her comfort zone.

“I’ll tell you another thing I became really conscious of was how much more politically engaged people my own age there were,” she notes.

Because of Israel’s mandatory military service for its citizens, Rabinowitz says her peers were more mature and brought a different set of life experiences than American college kids.

This led Rabinowitz to merge her interests in early Christianity and the formation of its doctrine with contemporary issues, such as the onset of settlements in the West Bank.

Fast forward to 2019, and it’s clear how those ingredients and that trajectory brought her to the Cohen Center.

Studying religion from an academic perspective, she points out, is far different than telling people about what or how to believe. Rather, it’s a more literary and historical understanding of religious texts — how they work, where they came from, what they reveal about us.

As a librarian, she has long been in the weeds of how to best preserve archives, how to keep resources coexisting between the print and online realms, and how to collaborate with students and other departments on projects.

The Cohen Center’s distinct status — not just as one of the only Holocaust studies centers in the country, but also in its unique interdisciplinary and community-oriented ethos — is in many ways a perfect fit for Rabinowitz professionally.

Sadly, it’s also a fit with her family history.

Her parents and some other relatives were able to come over to North America from Hungary before World War II, but others did not. Many of those who survived the Holocaust later immigrated to Israel.

The ship her mother’s family traveled aboard in 1929, according to Rabinowitz, was turned away by the United States, and ended up in Canada.

That history is inextricable from Rabinowitz’s role at the Cohen Center.

“The job of the center is to help people become more aware of the kinds of events and context that led to the Holocaust, and to think about that when we think about the sorts of events that are happening around the world today,” she says.

As she aims to make the center increasingly public-facing and hospitable for discourse inside its walls — whether in lunch chats with campus and community members or special events — the elephant in the room during many conversations is the 45th president of the United States.

Since Donald Trump’s election in 2016, what would otherwise be boilerplate messaging from the center on embracing immigrants, examining the history of racism in the United States and looking at modern incarnations of white supremacy can appear, to some, as a swipe at the president.

The tense and polarized public debate around Trump is something Rabinowitz takes seriously in how the center organizes dialogues.

“One of the things I’m really interested in trying to do is encourage more conversation,” she explains. “So what I’m hoping for is starting a, once or twice a month, short, sort of lunchtime conversation. And I would love to bring people in to have a good, facilitated conversation about what it means, for example, to say you support the policies of a party or individual, but not some of the rhetoric.

How one receives that messaging in a hyper-partisan and often racially or ethnically charged environment is where the center can play an important role, according to Rabinowitz.

“It’s a real struggle, I think, that we’re in, and I don’t know that we’re doing enough to provide spaces for people to talk about that in ways where we don’t end up arguing,” she says, “which is easy to happen.”

One method that has shown some promise, Rabinowitz offers, is the Vietnam War-era teach-in model, where basic parameters are set, and the conversation can move freely, hopefully arriving at potential solutions.

After the 2016 election, Rabinowitz and Dottie Morris, Keene State’s associate vice president of institutional diversity and equity, held several dialogues with students about the election and political division.

Following the teach-in model, Rabinowitz says she and Morris found success in creating comfortable conditions in which students were encouraged to participate and come up with some solutions.

And while scheduling did not allow for as much of a freewheeling time frame as the ones in the 1960s did, Rabinowitz says they were an overall success, and attributes that to Morris’ embrace of hard conversations.

Morris, who described Rabinowitz as her “favorite colleague at the college,” reciprocated the praise while away from campus in South Africa Wednesday.

“Celia is an amazing colleague,” Morris wrote in a text message. “She is committed, competent and dependable. I feel honored to work wither her in any project. I know it will be a success.”

The trajectory Rabinowitz was set on from the kibbutz way back when, aimed by the foundation her parents gave her to explore her intellectual interests, brought her to Keene — and she says there is nothing else worth trading that for.

“I got a lot of support, and what I have done since then built on that, and I wouldn’t change it for anything.”

At a glance: Celia Rabinowitz