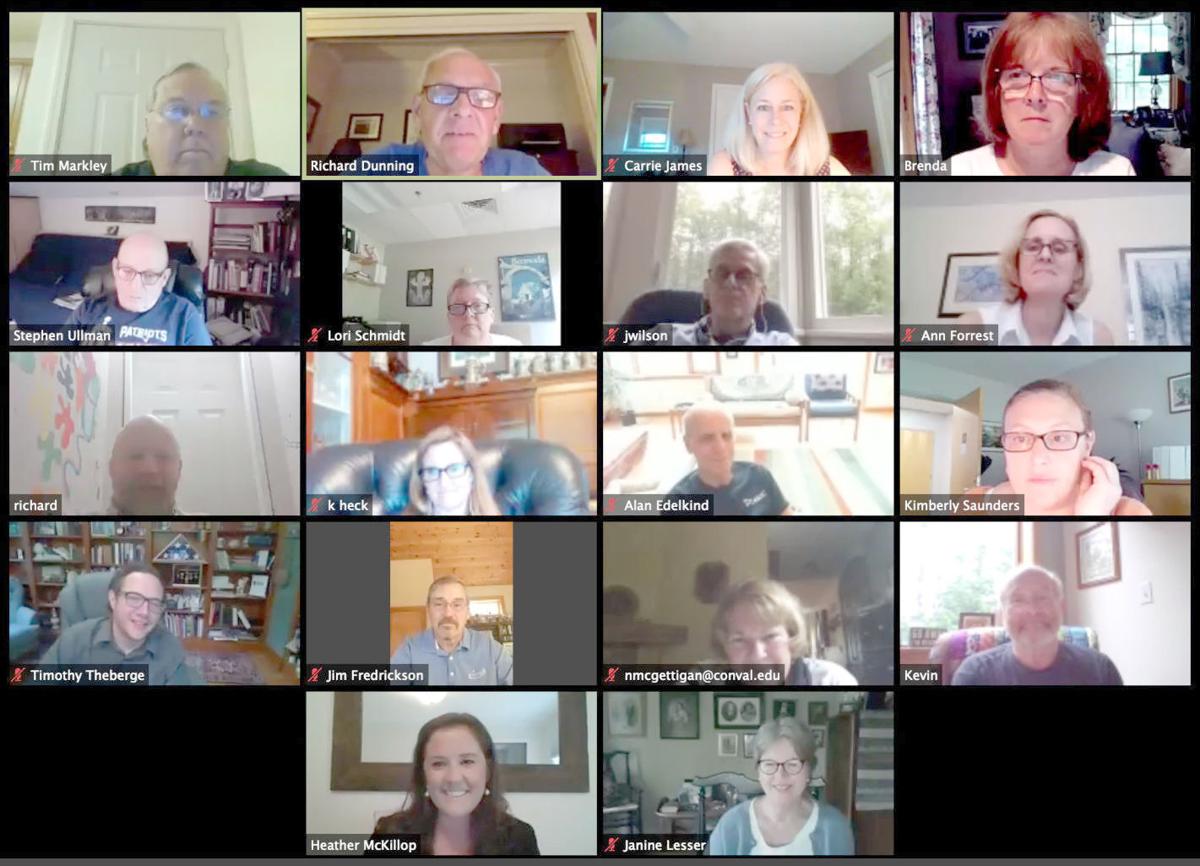 A screenshot of the ConVal School Board's meeting in late June. 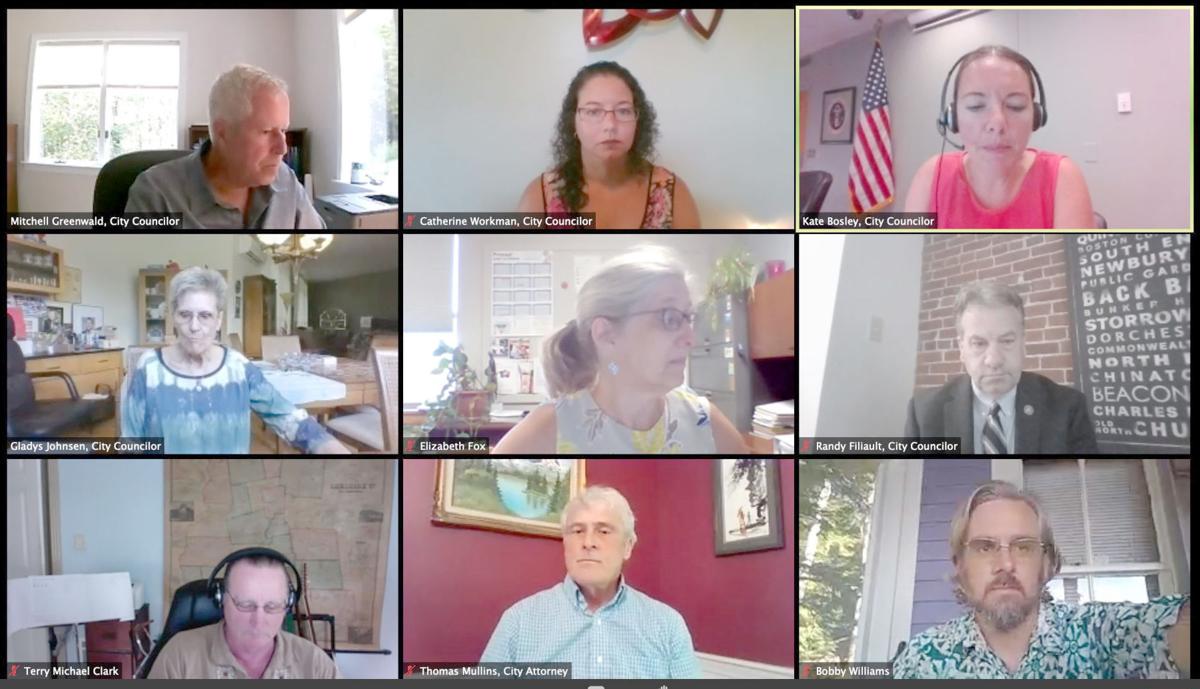 A meeting of the Keene City Council’s Planning, Licenses and Development Committee in July.

A screenshot of the ConVal School Board's meeting in late June.

A meeting of the Keene City Council’s Planning, Licenses and Development Committee in July.

With the expiration of New Hampshire’s stay-at-home order and the associated limits on gathering sizes, officials across the state are at a crossroads: Should public meetings continue virtually, or transition back to a live format?

In March, Gov. Chris Sununu signed an emergency order allowing public meetings to be conducted virtually during the ongoing state of emergency, prompting most boards to begin meeting via Zoom, Webex and other videoconferencing services. In the time since, some local boards have made technological strides they’re hoping to sustain after the pandemic subsides, with the goal of encouraging more public participation in their meetings.

Prior to the COVID-19 outbreak, it wasn’t uncommon for boards, councils and commissions to livestream or broadcast their meetings, according to Cordell Johnston, government affairs counsel for the N.H. Municipal Association. But in some rural areas, such as the North Country and parts of the Monadnock Region, limited broadband access has made using such technology difficult.

“So if there is no local cable TV station and if they don’t have the broadband capacity, there wasn’t really the ability to do that,” Johnston said.

The cost of setting up livestream technology can also be a challenge for small communities. A few years ago, the Chesterfield Board of Selectmen looked into the possibility, Chairwoman Jeanny Aldrich said, but at the time, the cost — roughly $12,000 — was not within the town’s budget.

Since transitioning to virtual meetings on Zoom, Aldrich said, the board has seen public participation increase significantly, with at least 12 members of the public logging on to each meeting. And Chesterfield’s selectboard members, who fall into at-risk categories for COVID-19, don’t feel comfortable returning to live meetings anytime soon, she said.

Those are some of the reasons she wrote to legislators asking that they consider changing parts of RSA 91-A, the Right-to-Know Law, which normally requires a physical quorum for regular meetings of public boards. Johnston said he has also heard some interest from other boards across the state about changing the statute, which would allow officials to continue holding virtual meetings after the state of emergency expires.

“I think one of the things is that we have the potential to have more people joining our boards and commissions, which we’re always trying [to do] — we’re always short,” Aldrich said. “I think I see more people willing to be active because the meetings are virtual and they don’t have to leave their homes.”

But not all boards are in a hurry to make the option of remote meetings permanent. In Peterborough, where selectboard meetings have been broadcast on a local public access channel and the online service UStream since before the pandemic, board members haven’t discussed the possibility, according to Chairman Tyler Ward.

Since switching to a virtual format on Zoom, the board has also begun streaming meetings live on Facebook, he said, and the ability to take questions in Facebook comments has been an asset. Ward said that’s something he hopes will continue after the pandemic is over, but he noted that in-person meetings are still the ideal.

“Really, you want to be talking face-to-face to people,” he said.

In Swanzey, early in the pandemic, concerns also arose over the accessibility of videconferencing technology after the town planned a Zoom meeting to discuss a controversial housing development proposal.

Some residents called for the meeting to be postponed until it could be held in person, raising concerns that the Zoom platform would shut out elderly residents and others who might not have a computer.

Meanwhile, the shift to remote meetings, instruction, work and medical appointments has highlighted longtime gaps in the region in Internet access and reliability.

According to Barrett Christina, executive director of the N.H. School Boards Association, school officials throughout the Granite State are also starting discussions about when to return to live meetings.

“I’ve heard from many school board members that they’re eager to get back to meeting in person because if the school board is having a recommendation or a plan that some students are back in the building, it seems reasonable that the board could meet in person as well, too,” Christina said.

Some boards have already begun to do so, such as the Winchester School Board, according to Chairwoman Lindseigh Picard, who said the board went back to live meetings in early August. The sessions are also being livestreamed on Facebook, as they were before the pandemic, and Picard said she’s a strong proponent of continuing to offer remote access.

As in Chesterfield, the Winchester School Board has seen more residents participating in virtual sessions than in live ones prior to the public health crisis, she said.

“I think there’s really something valid to live meetings, to in-person meetings, because there are some people who just handle that forum better than an electronic or an Internet or some other kind of technology kind of approach,” Picard said. “So in favor of being as democratic as possible in the process, I think you kind of have to offer multiple means.”

At its next meeting on Sept. 1, the Monadnock Regional School Board will discuss its format for future meetings, with the option of full in-person meetings or a hybrid model of in-person meetings broadcast on Zoom, Chairman Scott Peters of Troy said.

Having the option to host virtual meetings in the future would provide more flexibility for regional boards that encompass several communities, Peters said, especially in terms of what time meetings are scheduled. He noted that for Monadnock, meeting virtually has also streamlined the board’s sessions because it’s much more difficult for participants to interrupt or speak over each other.

“If the law were changed and a physical quorum was not required, allowing for remote meetings like this is very beneficial to districts like us,” Peters said, “where if you think about the mileage distance between Fitzwilliam and Gilsum — the two extreme points on our district map — there’s a lot of driving for board members who are not just doing board meetings but also doing one or two committee meetings a week.”

So far, Christina said, he hasn’t seen a push among school boards to permanently change the RSA requiring a physical quorum, but the N.H. School Boards Association supports efforts to provide more remote access through livestreaming and other methods.

“In terms of the technology and providing greater remote access, I think the boards that were doing that beforehand obviously will still continue to do it,” Christina said. “And if it’s a way to increase participation, we certainly encourage boards to do what they can to make their meetings more available to the public than they would be in a traditional sense.”