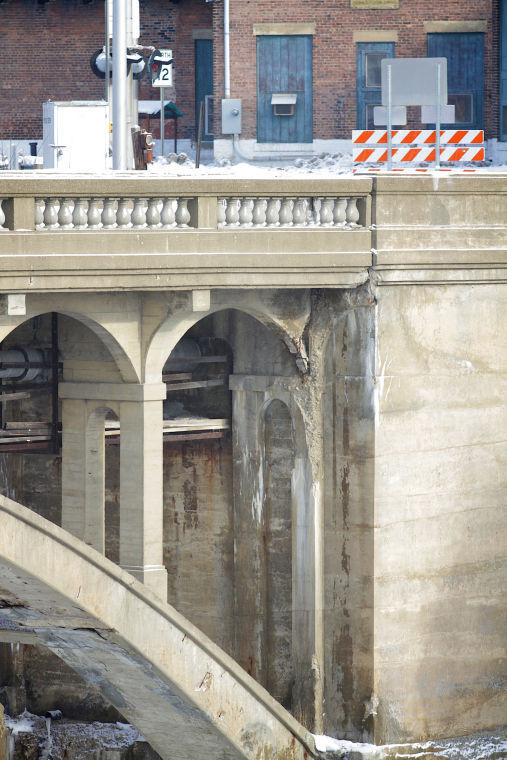 Signs of disrepair on the Vilas Bridge, as seen in January 2014. 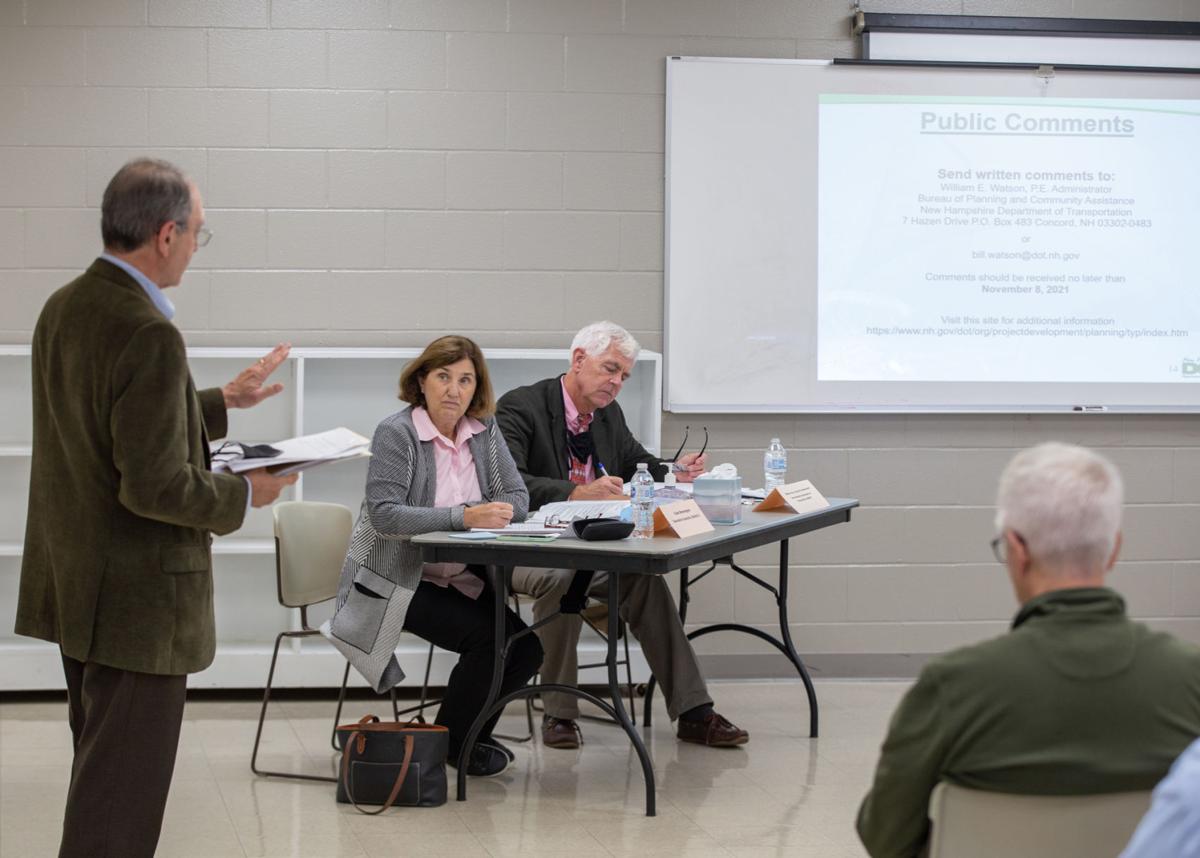 N.H. Sen. Jay Kahn, D-Keene, expresses the importance of repairing Vilas Bridge in Walpole, during a public hearing on the latest draft of the state’s Ten-Year Transportation Plan that was held at the Keene Recreation Center on Tuesday evening. 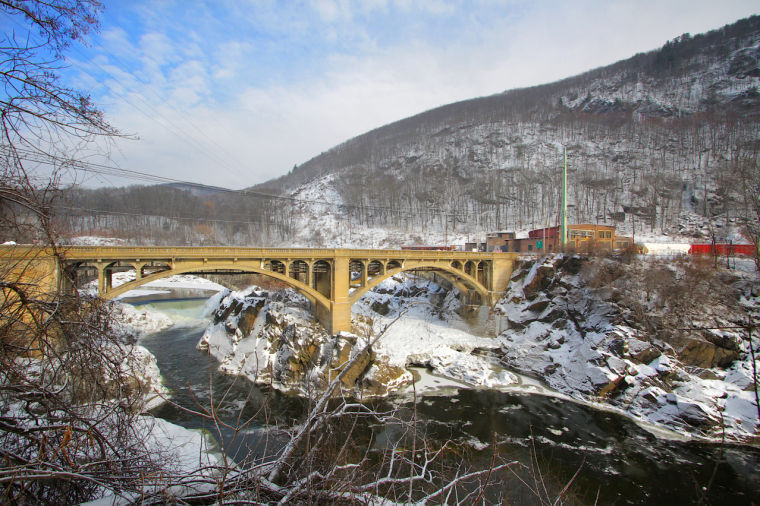 The Vilas Bridge, as seen from Bellows Falls in January 2014.

Signs of disrepair on the Vilas Bridge, as seen in January 2014.

N.H. Sen. Jay Kahn, D-Keene, expresses the importance of repairing Vilas Bridge in Walpole, during a public hearing on the latest draft of the state’s Ten-Year Transportation Plan that was held at the Keene Recreation Center on Tuesday evening.

The Vilas Bridge, as seen from Bellows Falls in January 2014.

At a meeting this week with state transportation officials, a local planning commission recommended about $4 million of federal funds be allocated to two Keene projects, while money to repair Vilas Bridge in Walpole remains elusive.

About 20 people gathered at the Keene Recreation Center Tuesday for a public hearing about the state’s latest draft of its Ten-Year Transportation Plan, which covers 2023 through 2032.

The 10-year roadmap is updated every two years and outlines transportation-related projects and programs across New Hampshire to be supported by state and federal funding. This work includes rehabilitating bridges, developing sidewalks and bike lanes, and paving roads.

Tuesday’s hearing — one of more than 20 scheduled throughout the state — was facilitated by Executive Councilor Cinde Warmington, D-Concord, and N.H. DOT Assistant Commissioner and Chief Engineer William Cass. In a presentation about the plan, DOT official Peter Stamnas said the Federal Highway Administration is the largest source of funding for the listed projects, with additional federal dollars from programs like the Coronavirus Aid, Relief, and Economic Security (CARES) Act and the American Rescue Plan Act.

For each new 10-year plan, the DOT allocates $50 million in federal funds for regional priority projects, determined by the state’s nine planning commissions. The amount each commission has to work with is determined by an area’s population and its miles of road eligible for federal funding.

The Southwest Region Planning Commission’s recommendations will inform how $4.29 million of those allocated funds will be used. At Tuesday’s public hearing, J.B. Mack, principal planner, said the commission recommends putting that money toward reconstruction and development projects along N.H. Route 101 and West Street in Keene.

In the spring of 2020, the commission — a Keene-based public planning agency required by state statute that supports local municipal development — reached out to the 33 communities under its jurisdiction, seeking project nominations. Those nominations were evaluated by the Southwest Region Planning Commission’s Transportation Advisory Committee based on 15 criteria, ranging from economic impact to safety measures, Mack said.

The Route 101 project would span from the Stone Arch Bridge to Branch Road. The highway needs a new base, Mack said, and the project scope includes widening the shoulders and addressing the sight issues at the intersection with Swanzey Factory Road.

This project was included in the previous 10-year plan, with construction set to begin in 2027, but funding has come up about half a million dollars short, so the commission is recommending that $500,000 of its $4.29 million allocation go toward addressing that gap. Under the current draft plan, construction is still scheduled to start in 2027.

The rest of the planning commission’s allocation would go toward what Mack described as a “complete street retrofit” of West Street, which he said would make it safer for pedestrians. If funded, construction for the project — which was not included in any previous 10-year plan — would start in 2032, according to Mack.

The project area spans from Routes 9, 12 and 10 to School Street, and within that area are five traffic signals, according to Keene City Manager Elizabeth Dragon, who spoke during Tuesday’s public comment session.

“... These traffic signals are aged and have been creating all sorts of traffic issues over the years. Being over 30 years old, they definitely need some updating,” she said, adding that there are minimal pedestrian and bicycle facilities in that area.

Following the presentations, members of the public were invited to share their thoughts on the draft plan. Hot topics included the rehabilitation of Vilas Bridge, which has been closed since 2009 and connects Walpole to Bellows Falls; municipal road maintenance and preservation in rural areas, particularly after the region’s heavy summer rainfall; the high number of red-listed bridges in the area; the lack of public transportation in the region; and improving and developing local rail trails.

“To leave this continuously adrift is, I consider, a mistake,” said N.H. Sen. Jay Kahn, a Keene Democrat whose district covers Walpole and much of Cheshire County.

Cass, the DOT assistant commissioner and chief engineer, explained that while the state has allocated highway funds to cover 50 percent of the bridge’s rehabilitation, the remaining half has not yet been secured.

In addition to her own statement, Cheryl Mayberry, chairwoman of the Walpole selectboard, read statements from two other board members, Peggy Pschirrer and Steven Dalessio. They said Vilas Bridge facilitates economic exchanges between Walpole and Bellows Falls, and all three mentioned that a sewer line that extends from Walpole to the Bellows Falls Wastewater Treatment Plant runs below the bridge and risks damage as the bridge deteriorates.

“... [We] are greatly concerned about the impact line failure would have on the communities below us that rely on the Connecticut River water supply,” Mayberry said.

“Rehabilitation of the bridge may not have a huge impact on regional transportation because of the Arch Bridge,” she said, referencing a bridge less than a mile upstream, “but perhaps there are other infrastructure resources to help fund the bridge repair and mitigate any potential environmental concerns related towards the underlying sewer line.”

In their own statements, her fellow selectboard members also said that, because of where state borders lie, New Hampshire would be responsible for most of the cleanup associated with a sewer-line break.

That state border is also, in part, why funding the bridge’s rehabilitation is difficult, Mack said. Because of where that boundary lies, New Hampshire would bear most of the expense.

But even if the local planning commission had allocated its full $4.29 million to this project, it wouldn’t be enough to cover costs, which are currently estimated at $17.7 million, according to Mack.

Similar public hearings as the one held in Keene Tuesday are scheduled across the state. In November, the Governor’s Advisory Commission on Intermodal Transportation, composed of the five executive councilors and the DOT commissioner, will make any amendments to the plan before submitting it to the governor for review.

Another local public hearing will be held tonight at 7 p.m. at the Jaffrey Fire Station meeting and training room at 138 Turnpike Road.