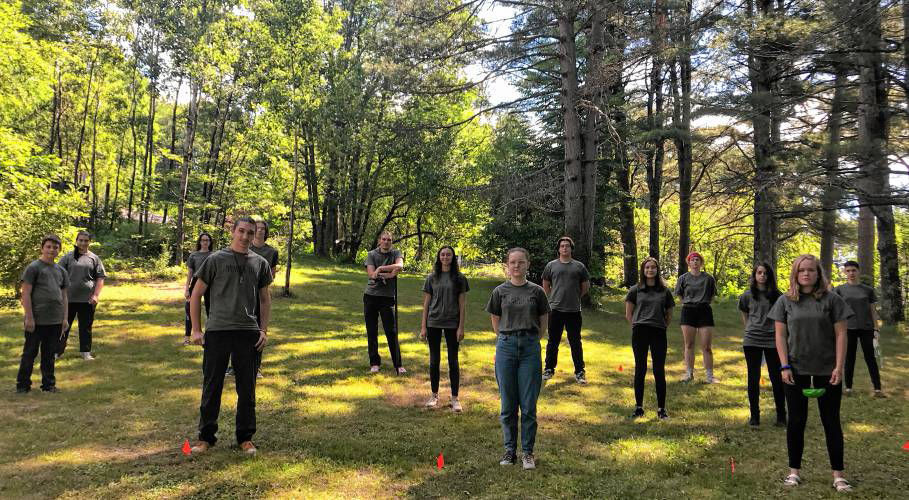 The cast of Project Shakespeare’s “Macbeth.” 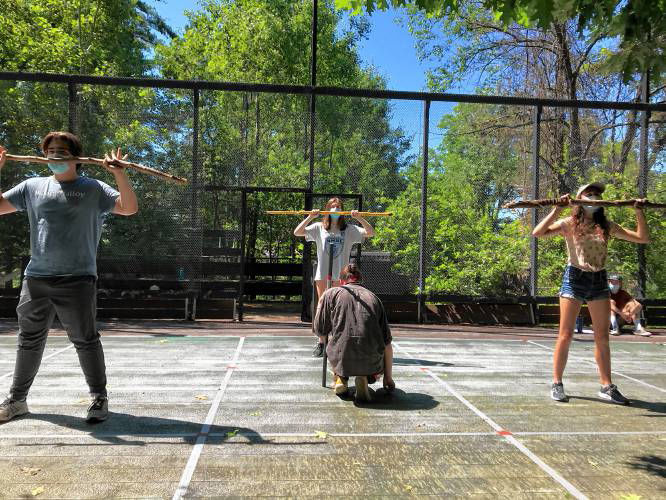 Project Shakespeare rehearses for a socially distanced “Macbeth.” The cast will wear masks during their performances, except when they give speeches.

The cast of Project Shakespeare’s “Macbeth.”

Project Shakespeare rehearses for a socially distanced “Macbeth.” The cast will wear masks during their performances, except when they give speeches.

It has nothing to do with an athletic competition but just rather the best — and only — way the founder of Project Shakespeare saw fit to prepare for a show this summer.

After 25 years of rehearsals in places like the United Church of Jaffrey and Rindge Meetinghouse, Thurber had to think outside the box for the organization’s 26th season — or more appropriately, think of a way to use the inside of one to rehearse for its four upcoming outdoor performances of “Macbeth.”

But she knew there had to be a way to put on one of her summer renditions of a Shakespeare classic safely. Project Shakespeare just celebrated 25 years in 2019 and wasn’t about to let a global pandemic stand in the way of a 26th season.

“This is completely different than our usual performances,” Thurber said. “This is really focused on the students and them being able to get together and do a play.”

The theater students began rehearsals online earlier this month but quickly moved to the outdoor space at Thurber’s home because there was a need to be together — just not too closely. The taped-off boxes allowed for students to maintain a six-foot distance from one another, while wearing masks, to prepare for their roles in Shakespeare’s classic play.

“It was like moving them on a chess board,” she said. On hot days the group would use a grassy area marked off with flags.

There’s only so much rehearsing that can take place when actors aren’t physically in the same place.

“There are certain things we can’t do when we’re apart,” Thurber said. “And I think everyone’s so glad to do some form of theater that’s not virtual.”

The time spent together is far more limited than in years past, just three hours at a time.

“Usually we’re working on two plays and rehearsing from 10 to 6,” she said.

It will be different, Thurber said, but she expects her students, all of whom are returning cast members, to put on a performance that people will remember for years to come. Because so far, it has been a collaborative effort.

“It’s theater education at its best,” she said.

As for the actual performance, Thurber said there won’t be much of the usual things associated with a Shakespeare play. In lieu of most costumes, the actors will be wearing T-shirts, jackets or vests. Props will be at a minimum, and the focus of each performance will be on the play itself.

Project Shakespeare students will wear masks on stage, except for when giving speeches, but Thurber said during those moments everyone else will be a safe distance away.

During the end fight scene between Macbeth and Macduff, the actors must get closer than six feet, but Thurber had a solution — casting the roles with brothers Yar and Tor Petrov.

Thurber chose to spend time really talking about the play, finding those parallels between the current times spent in a global pandemic and the living in fear and isolation that is involved in the story.

“In a way, we’re using the role of the pandemic to storytell,” Thurber said.

In the end, for Thurber, it was about giving her students the chance to do “what they love to do in the summer.”

And all of the work so far has been recorded with a plan to make a documentary to be completed in the fall.

“It was ‘how do we do this when we can’t get socially close to each other?” she said.

The performances for “Macbeth” will be held at four outdoor locations throughout the region, with opening night for the socially distanced version of “Macbeth” held on Wednesday, July 29, at Aldworth Manor in Harrisville with a rain date on Sunday, Aug. 2. Other performance dates include Thursday, July 30, on the lawn in Jaffrey Center, next to the Meeting House (rain date Saturday, Aug. 1); Monday, Aug. 3, behind the Dublin Community Church in Dublin (rain date Tuesday, Aug. 4); and Wednesday, Aug. 5, at the Cathedral of the Pines in Rindge (rain date Thursday, Aug. 6).

Thurber’s just glad they can do a show at all.

“It’s a little bit of normalcy,” she said. “It’s not normal, but gives you a sense of what’s normal now.”

All performances are at 6 p.m. weather permitting because “if it rains, we can’t go inside” and free to the public. Donations are accepted, and seating is limited to 50. For everyone’s safety, masks and socially distanced seating are required. There will be no programs or chairs, so audience members will need to bring their own chair or blanket. No food or drinks will be available for purchase at any of the performance locations.

“Safety has to come first,” Thurber said. “And I’m really acting on the side of super cautious.”

For more information about “Macbeth” or Project Shakespeare, contact Thurber at projectshakespeare@gmail.com.