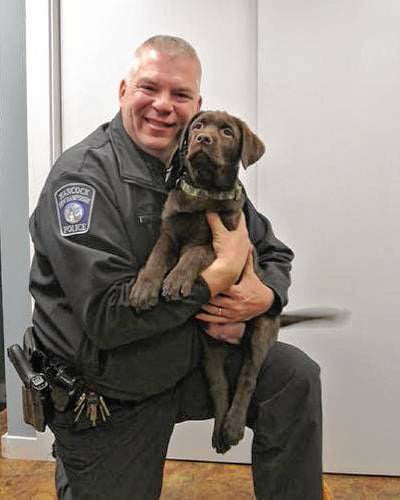 Police Chief Andrew Wood is shown with Officer Rookie, a chocolate English Labrador who served as a comfort dog. 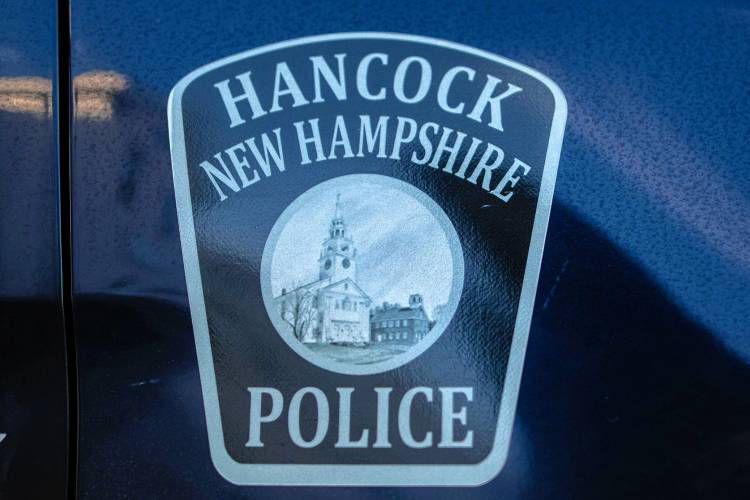 Police Chief Andrew Wood is shown with Officer Rookie, a chocolate English Labrador who served as a comfort dog.

HANCOCK — A Hancock Selectboard investigation into Police Chief Andrew Wood this summer found cause for the town to terminate the chief for allegedly violating several town, state and police department standards, according to documents obtained by the Ledger-Transcript.

Wood submitted his resignation to the town in September, saying “the events involving law enforcement throughout this country” led him to determine that he’d completed “all of the tasks that I set out to accomplish in Hancock,” according to a Facebook post on Sept. 28.

But the selectboard’s investigation, which was presented to Wood in an August letter, alleged that they had cause to terminate Wood for consistently submitting “inaccurate and false” timecards and employing an uncertified full-time officer who had resigned from a different department after he was accused of sexually harassing a fellow police officer.

Wood served as police chief in Hancock for 12 years and also served as the officer in charge of the Richmond Police Department until it was dissolved in 2019. The Hancock Selectboard’s investigation and the Ledger-Transcript’s independent review of timecards from both departments between 2017 and 2019 found multiple instances in which Wood logged overlapping hours for the two towns on his timecards.

“A review of your timesheets from the Towns of Hancock and Richmond, as well as dispatch logs, demonstrates a pattern of inaccurate, and false timesheet entries. It was not a one-time occurrence or lapse in judgment,” the town’s letter reads.

Wood lives in Fitzwilliam, which is adjacent to Richmond and about 40 minutes from the Hancock Police Department. He started working for Richmond in 1998. Richmond Selectboard member Andrew Wallace said their board had not been aware of Wood’s timecard discrepancies, nor had they heard from the town of Hancock as of Nov. 12. Voters opted to dissolve the Richmond Police Department in 2019 for financial reasons, he said.

“We were getting a much better deal with the Sheriff’s Department,” he said.

The Hancock Selectboard found cause for termination in the recurring discrepancies between the two town departments and police dispatch logs from Hancock, and Wood’s inability to adequately explain them, according to their August letter.

“Claiming you worked from the Town of Hancock when you were in fact not working for the Town is a serious transgression that took advantage of the Town and its taxpayers, and had a detrimental effect on the management and fiscal responsibility of the Town,” the letter reads.

The town also found fault with Wood’s hiring of Officer Nathan Jette, who was brought on as a full-time officer in 2018.

In their August letter, the board accused Wood of failing to thoroughly investigate Jette’s background after Jette approached him for a job at the Hancock Police Department in August 2018. Jette had worked for the Richmond Police Department for two years with Wood, leaving that department in August 2010. According to the investigation, Wood never interviewed any Winchester officials who overlapped with Jette’s time at the agency, even after Jette told Wood there had been a disciplinary issue in Winchester. Wood said he only learned of the alleged sexual harassment incident from a Police Standards and Training rep months after hiring Jette, who worked alone in the Hancock department despite lacking a valid certification — a violation of N.H. Police Standards and Training Council regulations.

Wood said Jette resigned after speaking to him on April 5, 2019, the day after Wood saw the file on the 2010 sexual harassment investigation. The Police Standards and Training Council unanimously agreed that the 2010 incident made Jette unworthy of police officer certification at an eligibility hearing in May 2019.

“...it is a most egregious violation of trust and integrity of this office; and he should not be considered as a police officer in the future,” the PTSC said in a record of the hearing. Selectboard members told Wood his lack of oversight in hiring Jette and managing him once employed represented a fireable offense.

In an undated letter responding to the selectboard’s claims, Wood wrote that he believed the town’s timekeeping policy applied to non-salaried employees. He defended some of his timecard discrepancies, telling Hancock officials that Richmond’s timecard policy had him recording a minimum of four hours per court visit regardless of actual time spent at court, and a minimum of one hour per phone call regardless of the length of the call. He also cited overlapping hours due to remote work for Richmond and overlaps in training between the two departments. “Given the passage of time, it is certainly difficult to gie [sic] precise details of dates and shifts,” he wrote. “I have never worked less than my 40 hours,” he wrote, and that he worked other unrecorded hours and has never had State Police cover a police shift.

With regards to Jette, Wood said he requested information from Police Standards and Training and Jette’s personnel file from Winchester, and didn’t find anything that would disqualify the candidate.

“We see this all the time. From large to small agencies to Federal and State agencies, we find things out after hiring someone that they do not belong in this profession for one reason or another,” he wrote. He said that Major David Parenteau of the PSTC found him at fault for accepting an older personal history statement from Jette rather than a current one. The Ledger-Transcript requested Jette’s personnel file from Winchester, but did not receive any information by press time.

“I can’t really get into … what he knew and when he knew it,” until the PSTC concludes their involvement in the situation, Parenteau said when the Ledger-Transcript asked him whether it was possible Wood hadn’t had access to the allegations against Jette earlier. Parenteau said that the PSTC is still in communication with the town about the matter. Whenever an officer resigns in lieu of dismissal, the PSTC collects information and keeps it on file, he said. “If we get a notification that somebody hired this individual, we bring that old case forward” at that point, he said.

If an uncertified officer is found to be working alone, without a certified officer physically present at all times, the PSTC could place sanctions on both that officer and their supervisor, Parenteau said. When asked what consequences an officer could face for logging hours in two towns simultaneously, Parenteau stressed that the PSTC wasn’t an investigative agency, and the involved towns would first need to determine what kind of a violation occurred, whether contractual, or criminal, or theft, he said, at which point they could notify the PSTC so they could investigate further and conduct an eligibility hearing.

When asked why the board did not fire Wood outright, opting instead to draw up a separation agreement, Town Administrator Jonathan Coyne said that they worked up a settlement. He said he didn’t recall how they initially discovered Wood’s alleged transgressions, just that it was “brought to their attention.” Selectboard Chair Laurie Bryan did not respond to a request for comment.

The separation agreement that Wood signed dictates the terms under which he would work before his employment ends on Dec. 31. “This separation agreement … settles a disputed claim, is offered to buy peace and shall not in any way be construed as an admission by the town that it has acted wrongfully with respect to Mr. Wood,” it reads.

Wood did not respond to a request for comment. A term of the separation agreement prevents him from publicly disclosing any information concerning his claims or disagreements with the town, or the agreement itself.

Wood announced his resignation, effective Dec. 31 of this year, on the evening of Sept. 28, the day the selectboard had scheduled to meet with him to discuss their allegations. Hancock budgeted $77,314 for Wood’s salary in 2020. His hourly rate in Richmond was $28.50 an hour in 2019.

These articles are being shared by partners in The Granite State News Collaborative. For more information, visit collaborativenh.org.