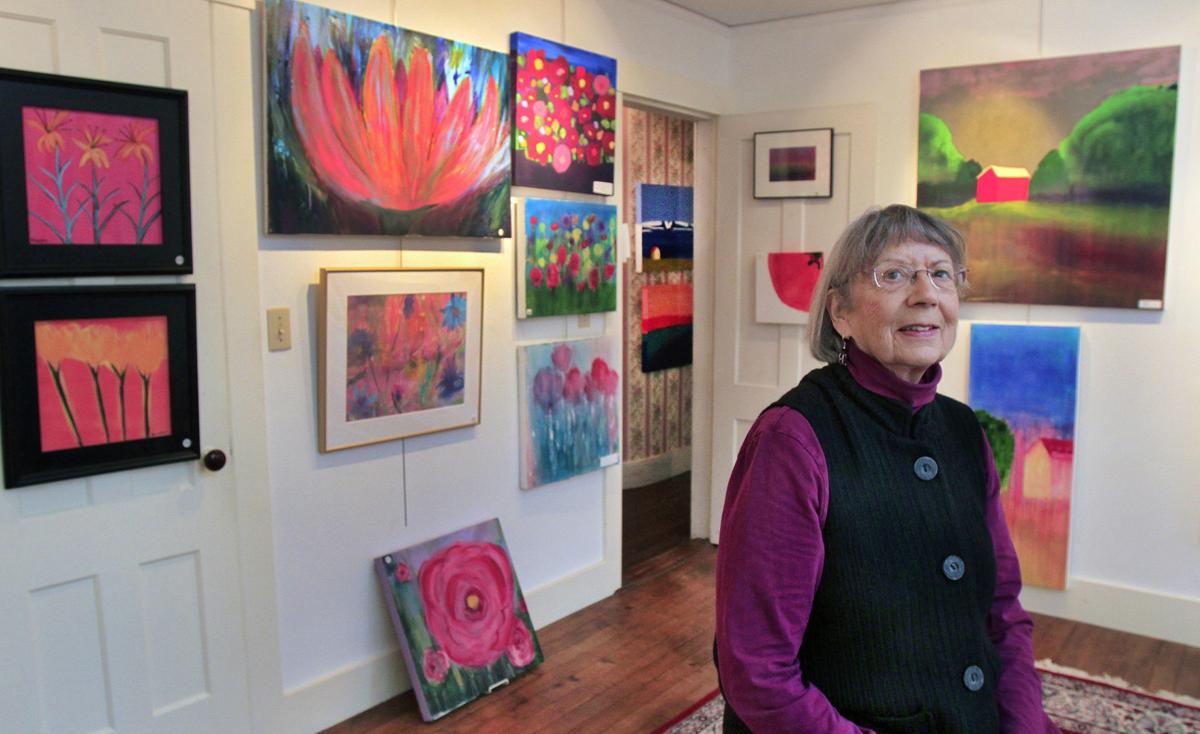 Frankie Brackley-Tolman, shown here at her studio in Nelson Thursday, traces her interest in art to her parents. “We always had art books at home, we always went to museums,” she says. 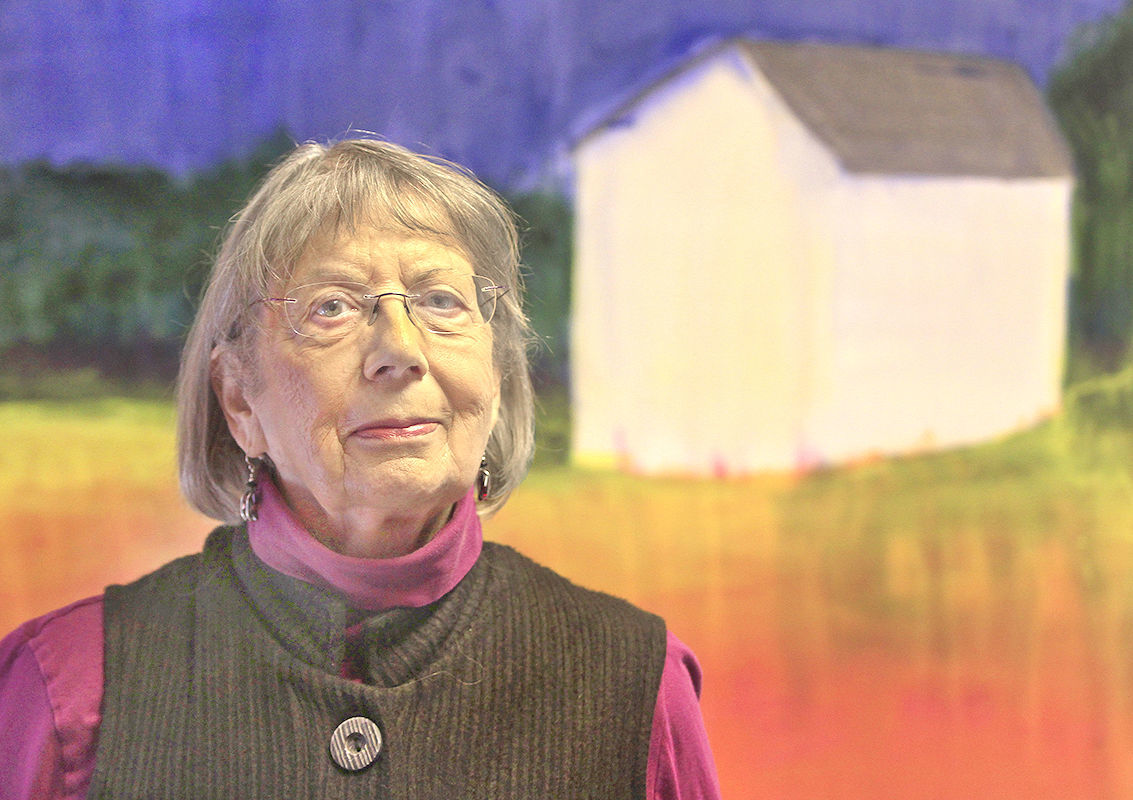 Frankie Brackley-Tolman, shown here at her studio in Nelson Thursday, traces her interest in art to her parents. “We always had art books at home, we always went to museums,” she says.

NELSON — It is probably only one or two days past the high-water mark of the fall foliage season here — many trees are still ablaze in hues of red and gold — and the leaves on the ground in front of Frankie Brackley-Tolman’s art studio are more than ankle-deep, at least as high as the first step to the front porch.

That’s appropriate, because much of her work, done in vivid acrylics, features a wide range of colors that often mimic the spectrum of tones in the changing trees.

She’s a quiet woman with a soothing voice, slight, a self-admitted introvert — a botanist by training — and she has been sketching and painting for most of her life, amid a host of other jobs. Her Amethyst Studio and Gallery on the unpaved Nubanusit Road in Nelson is in a home built in 1876, the third structure on the site. All were built by the pioneering Tolman family from which her husband, Harvey, descends. Nearby are Tolman Pond and Tolman Road.

“I am constantly bowled over by the heartbreaking beauty of the world,” she declares on her studio’s website. “... Acrylic paints provide me with the luminosity and vibrant colors to create an atmosphere that celebrates the joy of life — and hints at its transitory nature.”

A lengthy interview with Brackley-Tolman turns into a nuanced lesson that helps explain the thinking and sentiments that drive a person to create, whether it be in the visual arts, music or writing.

“I took a class once where the instructor said you have to have emotion about what you’re painting,” she says. “That was an eye-opener for me. Paul Cézanne said that a work of art which does not begin with emotion is not art. I used to tell my students that before you start a painting, you have to boil down to a word what you want to accomplish, what feeling you want to convey.”

Many of her works feature houses and barns, but not realistic depictions; they’re more impressionistic. “I like to distill things down into simple shapes,” Brackley-Tolman said in a feature about her art in a recent issue of Keene State Today, the college’s alumni magazine. “I don’t want to paint what they look like, but what they feel like. You can get more emotions across without going into the detail.”

She is often inspired by what she observes in her travels. For instance, she was so impressed by the stark, beautiful scenery of Iceland that it resulted in a series of paintings. Another trip to the Northeast Kingdom of Vermont likewise spurred her to paint, as have frequent trips to Maine. As in her depictions of houses and barns, these paintings are not realistic portrayals of the landscape, but renditions of what she’s seeing through her mind’s eye.

Her work has been widely recognized in the area and state, including in the 2018 NHPTV juried auction, the 2017 Monadnock Art Auction in Jaffrey, and the 2015 Biennial Regional Jurors’ Choice Competition at the Thorne-Sagendorph Art Gallery at Keene State College. She has also had a series of solo shows around New England and has been featured in many multi-artist exhibits. She says her paintings sell well, both regionally and nationally.

Born in Topsfield, Mass., which is part of Cape Ann on the North Shore, Brackley-Tolman is the eldest of three daughters of the late Gene and Winifred Brackley. Her father was the night editor at The Boston Globe, her mother a homemaker with interests in drawing, painting and writing.

“My interest in art comes from both my parents,” she says. “We always had art books at home, we always went to museums.”

By happenstance, she was introduced early to the world of art galleries. “For some reason, The Globe lost their art critic, and my father volunteered to take the job on. I ended up being taken to the exhibits he was reviewing.”

As a youngster, she found herself “doodling and drawing” frequently, mostly cartoon characters.

After high school, she attended one year of college and then married. In quick succession, she had three children in four years, and the family eventually moved in 1969 to Harrisville.

When her children reached school age, she enrolled in extension courses at Harvard University and night courses at Keene State College. She earned her bachelor’s degree in biology from Keene State in 1974. That same year, she and her husband divorced.

She worked long hours during that time, making extra money as a waitress on the weekends. “I have a lot of sympathy for waiters and waitresses,” she says. “It’s not easy work.”

Eventually, she enrolled in graduate school at the University of New Hampshire, and earned a master’s degree in botany, with a specialty in the taxonomy of vascular plants. (Vascular plants are those that use specialized tissue for transporting food and water to different areas of the plant. Trees, flowers, grasses and vines are examples.)

She got a job first with the Nature Conservancy and then with the state of New Hampshire as coordinator of its Natural Heritage Inventory Program. The program helps protect the state’s rare plants in forests, wetlands and grasslands.

In addition to those roles, she was also an adjunct biology instructor at Keene State while at the same time drawing and painting, as well. She experimented with different media and styles, starting with watercolors and eventually switching to acrylics.

In 1990, she moved to Nelson and met her future husband, Harvey, at a contra dance at the Nelson Town Hall. Tolman, an electrician by trade, is also a notable artist in his own right — a well-known fiddler in the New Breton style of playing, and recipient of the 2007 New Hampshire Folk Heritage Award. He is a frequent performer at the popular Nelson Monday Night Dance that features contra dancing from 8 to 10:30 p.m.

Soon thereafter, she began to feature her work in several exhibits locally. “People began to buy my work,” she says, “which is always an affirmation for an artist.”

It was then that she made the decision to devote herself to art full-time, and applied to be an instructor at the Sharon Arts Center in Peterborough.

“I told them I had no qualifications, but I knew how to paint, and I knew how to teach,” she says. She was hired and remained there for 15 years. She and some of her students still meet monthly at her studio for a “coffee and critique” session where they review each other’s works.

The Sharon Arts Center closed this year after its merger with Henniker-based New England College and the Manchester-based N.H. Institute of Art.

Like most artists, Brackley-Tolman says there is a rhythm to her work day, which starts at about 9:30 a.m., “fueled by caffeine; it sparks creativity.” She breaks for lunch, usually at the Harrisville General Store, and then returns to work until late afternoon when she meditates and then takes a walk with a friend.

The most satisfying aspect of creating art, she says, is “getting lost in my work, so focused that I’m not aware of my surroundings; all else fades away.”

The least satisfying facet, she says, is tending to the promotion and sale of her work. “I’m an introvert; it’s not easy for me to put myself out there. I do have friends and good thing, too, because otherwise, I’d be a total recluse.”

She may not paint every day, because “life has to be tended to.” But she wishes she could spend every day painting and writing. “I think of all those other things in life as interruptions.”

Her writing consists primarily of working on a memoir, which encompasses her very first memories until the end of high school.

“I’m writing it in the voice of a child, and then reflecting upon those experiences as an adult,” she explains. “I was the only child, my sisters came later; my father was absent, my mother was nervous and anxious, maybe suffering from postpartum depression.”

Brackley-Tolman began writing after enrolling in a popular memoir-writing workshop led by Pam Bernard of Walpole. In those sessions, participants are encouraged to explore their lives and experiences and turn them into written stories.

The writing has helped her understand more about herself and about her parents, she says, and now that she has matured and grown older, she reflects on the vicissitudes of life.

“I’m a happy person; I wasn’t always happy in my life. But time helped … and a better husband,” she says. “I’m more patient and able to put things into better perspective.”

At a glance: Frankie Brackley-Tolman