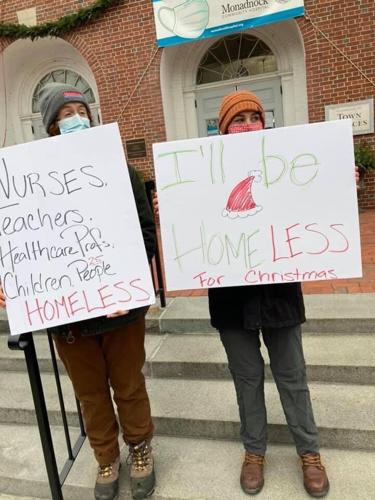 Griffin Kelley and his wife, Elanie, shown here Monday outside the Peterborough Town Offices, were among those who live at Walden Eco-Village who protested the town’s order that they vacate their homes this week. 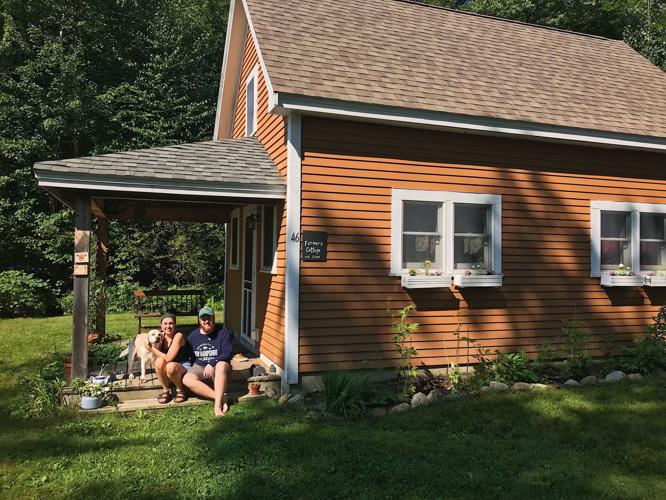 Griffin and Elanie Kelley outside their cottage at Walden Eco-Village in Peterborough. 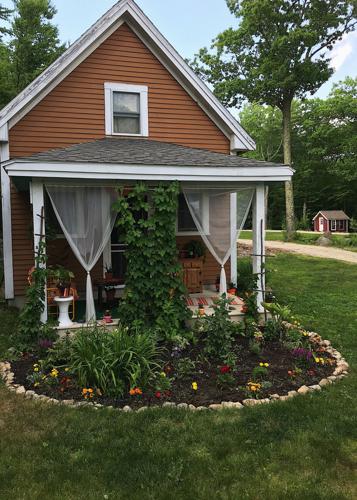 Griffin Kelley and his wife, Elanie, shown here Monday outside the Peterborough Town Offices, were among those who live at Walden Eco-Village who protested the town’s order that they vacate their homes this week.

Griffin and Elanie Kelley outside their cottage at Walden Eco-Village in Peterborough.

In a meeting that began 23 hours before residents of the Walden Eco-Village — a sustainable-living community at 36–54 Garland Way — are scheduled to be forced off the property, town officials explained the rationale for the order as well as their efforts to find alternative shelter for those in need. Those efforts will include making homelessness outreach coordinators available on-site Wednesday for residents who have not yet found a place to stay, in addition to transportation and financial resources for people sheltering in other locations.

The vacancy order stems from the town’s Dec. 10 inspection of the Eco-Village that had been prompted by a proposal from its landlord, Akhil Garland, earlier this year to expand the community.

Peterborough Code Enforcement Officer Tim Herlihy found unapproved utilities connections and unauthorized residential structures during his review of the site, he told Garland in a cease-and-desist letter Friday. In his letter, Herlihy ordered Garland to require that residents vacate their homes by 4 p.m. Wednesday.

Garland informed Eco-Village residents of the order later on Friday.

In his presentation to the selectboard Tuesday, Walker shared photographs showing that buildings on-site have electrical and propane connections — neither of which were permitted when the Eco-Village was created as temporary housing for staff at the nearby Well School, the town said in a news release Monday. The photographs also indicated serious safety concerns, Walker said, with electricity running to the buildings through a series of extension cords and gas via hazardous installations.

“The total number of issues here around the electrical and gas is such that it does pose an immediate danger to the residents,” he said.

Selectboard members expressed agony over the Eco-Village order, given its impact on the tenants, but all three said it is necessary to protect them from any hazards created by the utility connections.

“As awful as this is, it would be a whole lot worse if we were reading an obituary,” board member Bill Taylor said.

Rachael Austin, an Eco-Village resident, called the visual evidence that Walker presented Tuesday night “damning” and added that it is clear to many of the community’s residents that Peterborough officials are just “doing their jobs.” Many of the tenants have shifted blame to Garland, she said, saying that he should have addressed the hazardous installations earlier.

“The landlord is absolutely to blame,” she said. “... The evidence is very, very clear that he has been neglectful.”

Garland deflected criticism onto the town Tuesday night, saying he was never given an opportunity to address the violations before this week and calling the collateral harm to its residents “cruel and unusual and inhumane.”

The Eco-Village comprises six residential cottages, with a total of 17 residents, and eight “casitas,” or tiny homes, with one resident each, according to Amy Wilson, who has lived in the community since 2008, shortly after it was founded.

In addition to the utility violations, Peterborough officials also discovered during the Dec. 10 inspection that the casitas had not been approved and do not comply with town zoning requirements for a “dwelling,” according to Herlihy’s letter.

Herlihy wrote that it is Garland’s responsibility to provide residents with alternate housing “until [the] structures are properly permitted.”

Garland said Tuesday morning he was committed to addressing the electrical and gas issues, which Deputy Town Administrator Nicole MacStay had said could allow the cottage residents to temporarily remain in their homes past the Wednesday deadline.

Efforts to remedy those issues stalled by noon on Tuesday, however, Garland told The Sentinel in an email. Walker told the selectboard that an electrician had determined there is not adequate power on-site to safely provide a minimal level to the cottages.

That likely eliminated the last chance for many Eco-Village residents to stay in their homes past the Wednesday afternoon deadline.

Garland said Tuesday he may be able to accommodate at least some at Cobb Hill Estate, a Harrisville wedding venue that he owns, until Dec. 23. Adjacent properties to the 750-acre estate have lodging for up to 45 people, according to its website.

Garland said Tuesday night he had also identified other housing options, expressing confidence that “everything’s going to fall into place.” He declined to give specific options, however.

Noting the possibility that some Eco-Village residents will not find alternative shelter by the Wednesday deadline, MacStay told the selectboard that homelessness outreach coordinators have already begun working with residents to identify housing opportunities and will be on-site Wednesday. The coordinators can also help defray transportation costs for anyone moving outside the region and can offer financial assistance for any residents signing a new lease, she said.

In fact, Peterborough may be required by state law to provide housing assistance if the Eco-Village residents are forced to leave, according to Steve McGilvary, a housing paralegal for the Concord-based Legal Advice & Referral Center.

“The town has a legal obligation to provide them with emergency relief for shelter,” he said Tuesday afternoon, citing RSA 165. The statute requires that anyone “who is poor and unable to support himself shall be relieved and maintained at the expense of the [municipality].”

But the burden on Eco-Village residents, who live modestly but are not required to earn below a certain income level to live in the community, may be more temporal than financial.

Griffin Kelley, a resident of nearly three years, was still searching with his wife, Elanie, for a place to live as of Monday afternoon. Kelley, a special-education instructor at ConVal Regional High School, said he feels fortunate to be able to work remotely, explaining that forcing residents to vacate will mean taking some away from their jobs.

“There really aren’t options for us,” he said. “… We might be displacing people so that their livelihoods are in jeopardy, much less their shelter.”

McGilvary said he was surprised Peterborough is requiring the Eco-Village residents to vacate their homes in the winter, when people experiencing homelessness face greater safety threats due to the cold.

“I’d like to think that … maybe they’d come up with some other solution,” he said.

Explaining that neither his organization — a nonprofit providing legal services to people of low-income in New Hampshire — nor its partner, N.H. Legal Assistance, were aware of the Eco-Village situation before a reporter’s call Tuesday, McGilvary offered multiple legal actions available to residents.

Any tenant forced to leave their home by a municipal condemnation order can request that the local district court consider the validity of the order, he said, adding that the court must hear the case within seven days of that request. In addition, he recommended contacting LARC or NHLA if the town executes its order and does not provide relief shelter.

Eco-Village residents did receive one piece of good news during the selectboard meeting Tuesday night: The property’s boiler facility, which warms the homes via radiant floor heating, will remain on following the Wednesday deadline, according to Walker.

Residents had voiced concerns that shutting off the boiler would damage their floors and possibly their belongings, he said. They will now be able to return to the property at a later date to retrieve any items left behind.

Welcome to the discussion.

Keep it Clean. Please avoid obscene, vulgar, lewd, racist or sexually-oriented language.
PLEASE TURN OFF YOUR CAPS LOCK.
Don't Threaten. Threats of harming another person will not be tolerated.
Be Truthful. Don't knowingly lie about anyone or anything.
Be Nice. No racism, sexism or any sort of -ism that is degrading to another person.
Be Proactive. Use the 'Report' link on each comment to let us know of abusive posts.
Share with Us. We'd love to hear eyewitness accounts, the history behind an article.

We're always interested in hearing about news in our community. Let us know what's going on!

Get up-to-the-minute news sent straight to your device.