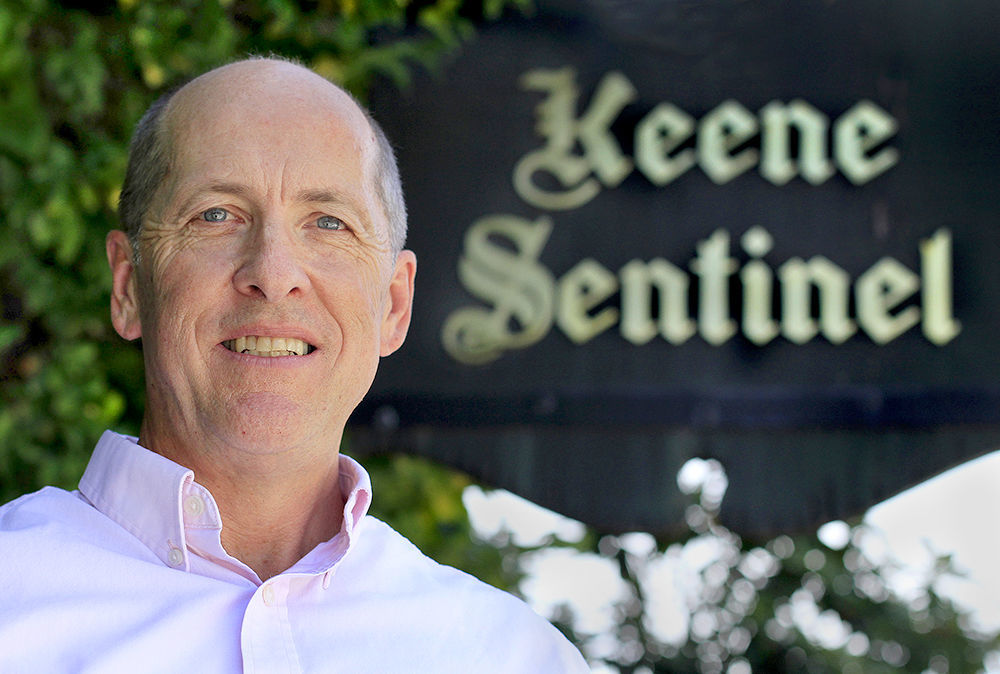 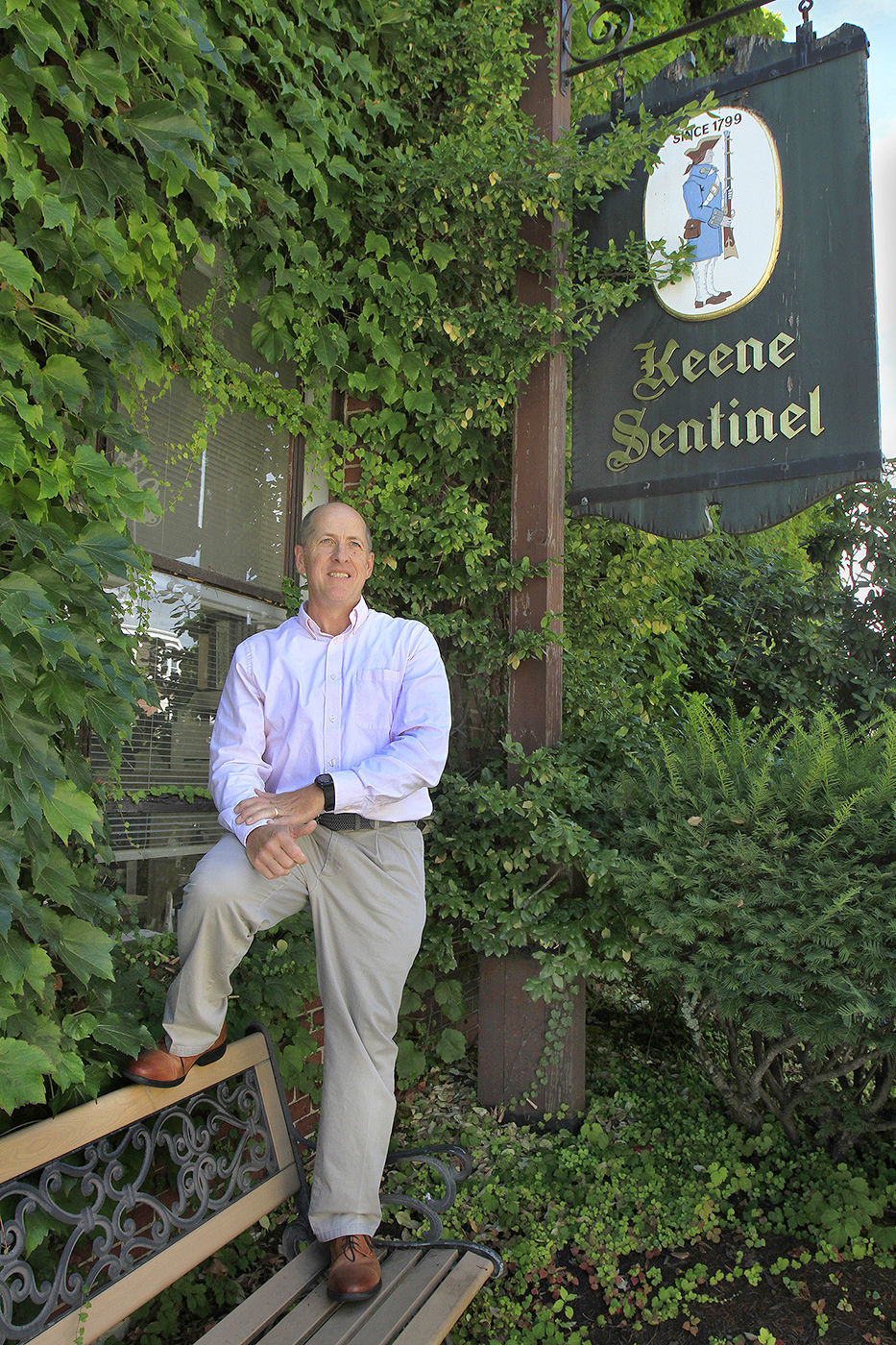 Executive Editor Paul Miller stands outside the entrance to The Sentinel, where he worked for 36 years before leaving Thursday for a new challenge working with the Keene Family YMCA.

Executive Editor Paul Miller stands outside the entrance to The Sentinel, where he worked for 36 years before leaving Thursday for a new challenge working with the Keene Family YMCA.

The thing about newsprint is it doesn’t wash out. Not when it’s been caked on for 36 years, layer upon layer, paper after paper, the ink so thick that it permeates skin, circulates inside you for eternity.

Paul Miller, 59, a part of this newspaper for nearly four decades, dipped his hands in news ink for the final time Thursday as executive editor of The Sentinel. Doesn’t mean he won’t take an occasional dip here and there — maybe cover a football game, a town meeting, the Ryder Cup? — but henceforth his amiable nature and insatiable curiosity about people will enrich the Keene Family YMCA, and beyond. He starts there Tuesday as its development and community impact director.

Miller’s tenure followed generations of newspaper lifers who served here before him, journalists who wholeheartedly believed in this community, and the vital role of the local newspaper. We observe, question, investigate and nitpick for the good of the populace. We try like heck to be accurate. Like thousands of small daily and weekly newspapers across the country, it just so happens that we live among the neighbors we write about. It’s a conflict-of-interest conundrum at times, for sure, but it also reflects on our commitment to the community and ourselves. Miller has lost friendships because of decisions he had to make here, and that’s a lament and a fact.

“We try to lead discussions in matters of civil importance instead of preaching and telling (readers) what they need to know,” Miller says. “We know readers are engaged because they talk to us. They let us know everything they like and everything they don’t like.”

Newspapers are a convection for community conversations. And newspapers douse false rumors by presenting facts. Those, Miller believes, are two of the most important tenets a local newspaper can offer its readers. “We can be a conversation starter, number 1, and a rumor-control place. And today, the rumor mill churns greater than it ever has,” he says.

Miller today finds himself in a unique situation as the subject of a Monadnock Profile. He’s overseen hundreds of them — our traditional Saturday ode to leaders, movers, shakers, artists and flat-out interesting people who live in our region — and written many profiles himself. So this one, about him, is a bit different. It’s written with bias, nostalgia, even a little playfulness. We started working together almost 33 years ago, and never tired of it. Oh, we’ve taken opposite sides plenty of times, done some growling at each other. If we weren’t blunt, we wouldn’t be doing our jobs.

For instance, there was that time, 22 years ago, when I lobbied for Monadnock Regional field hockey sensation Annie Lavigne — known today as Dr. Andrea L. Pearson, a dermatologist in Keene — to be our sports section’s 1997 Sportsperson of the Year. Colleague Jim Fennell argued for Dan Moylan, a pretty good baseball player, or so I’ve heard. And argued, we did. Miller, as sports editor, was the man in the middle and went with Moylan, today a special education teacher and the school’s baseball coach. We have followed their careers with pride.

Though he’s lived in Keene most of his life, Miller is not a native. He was born on an Air Force base in Omaha, Neb., the son of Nancy Lamoureux and the late Ray Miller, both Air Force veterans. They eventually settled in Keene, where Ray was known as an outstanding pool player and bowler. When they divorced, it was Nancy who mainly raised Paul and his brother, Chip, and sister, Jane.

“My mom, what she was able to do raising myself and my brother and sister, was remarkable,” Miller says. “She was a voracious reader, and smart” — on her 80th birthday, she had a book of poems published. “She’s always been my biggest fan.”

A doting grandfather, Miller was close to his own grandfather, Harold Wheelock, a mail carrier and top-notch athlete. Miller developed the same love of sports as his grandfather, and played for legendary coach Bucky Main on the Keene High baseball team. Decades later, we never let him forget that then-Sentinel sportswriter Gary Fitz described him as a “light-hitting second baseman.” Years later, Fitz moved on to The Telegraph of Nashua, and it was Miller who took his place as a full-time sportswriter at The Sentinel.

He originally intended to carve out a career in business, took Accounting 101 as a freshman at Plymouth State. “I’ll start in business and figure this out,” he remembers thinking. “And I did; I figured it out in seven weeks. I knew I wasn’t going to get through Accounting 101.”

He harkened back to his high school days, to a particular teacher, Geoff Butler, and the British literature course Butler taught. Butler was known for handing students envelopes that contained notes, usually bad news, something like, “Better get your grade up or you are in trouble.” Miller got one of those dreaded envelopes, except the note read, “You, young man, need to pursue a career in words. And don’t be afraid to speak up in class.”

Miller settled in as an interdisciplinary studies major at Plymouth State, with a minor in English. He met Dr. Richard Sanderson, his adviser and mentor, who developed a course strategy that merged his love of writing with sports. He read and wrote at every opportunity, eventually took a job at the Brattleboro Reformer for eight months. That led to a stint at Franklin Pierce College as a writer/reporter that turned into an interim position as sports information director, then under the guidance of former governor Walter Peterson.

When Fitz left The Sentinel in 1983, longtime editors Bert Rafford and Frank Barndollar interviewed Miller for the sports reporting job. They stumped him with the question: Are you a political groupie? “I thought I totally botched the interview,” Miller says. “I tried to fudge the answer.”

The rest is history. Former Sentinel editor Jim Rousmaniere shook his hand the next day and welcomed him into the fold. “What a cool thing to come up through this business with people like that,” Miller says of Rousmaniere, Rafford, Barndollar, Tom Kearney and many others.

I came aboard three years later, when Rafford retired as sports editor and Miller ascended to the position. We first met at a newspaper awards dinner in Boston, and a few months later, he offered me his old job in sports. We’ve since done hundreds of stories together, traveled thousands of miles. One of our first road trips in my first month was to Plymouth for a high school tournament game, and he got stopped on Route 9 in Antrim for speeding in a 45 mph zone. He got a little snippy with the officer, who unflinchingly came back and announced, “Your license is expired.” And he went silent. With me now behind the wheel of his stick shift, we lurched our way to and from that game.

Our longest trip was a doozy. One Saturday, 30 or so years ago, we drove to Concord for a playoff softball game in the morning, then to Dover, Del., deep into the night to see local resident Bob Whitcomb’s racing team in action. We did features at the NASCAR Winston Cup race that Sunday at the Monster Mile, drove back through the night and returned barely in time to put out Monday’s paper. I still wonder how many typos we missed. For several years, we took weekend trips to Pocono, Pa., where we’d do numerous interviews that we turned into auto racing special sections.

He coached town teams and travel teams, AAU teams. He moved up to the high school varsity level and won almost all the time in four years with the golf team, and lost much of the time in seven years coaching girls’ basketball at Keene. A mere week ago, the mother of one of his players marveled at how much fun her daughter had playing basketball for him.

Miller moved to The Sentinel’s news section after a little more than a decade in sports, and I followed a couple years later. He gradually worked his way up the leadership ladder, and one of the first stories we covered with him in charge was the floods of 2005.

It was a remarkable time in the newsroom, a Sunday morning when the seriousness of the flooding became apparent. Most of our staff gravitated here, without being called in. Miller organized the coverage, and by Sunday night, we were going full throttle toward an expanded Monday edition.

The last 10 years have been about change in the newspaper industry, as the Internet, social media and the like, has chewed us up pretty good. Miller, though, is unwavering in his optimism that presenting accurate local news is a must in a thriving community, and it will find a way forward.

“Don’t mourn for our business. I still think there’s growth opportunity here. We have all the tools to do that,” Miller says.

Newsprint lasts forever, the first draft of history, even if the passage of time yellows the page a bit.

“It’s not going to leave my blood,” Miller says.