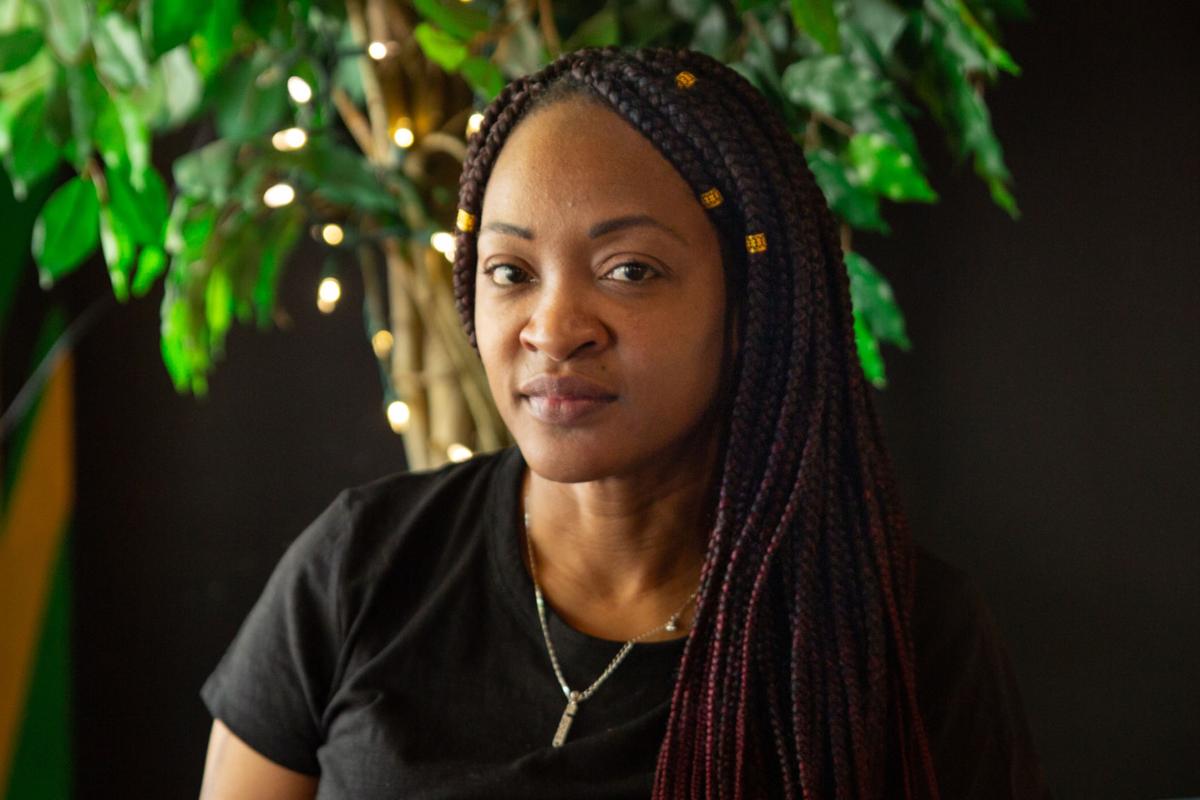 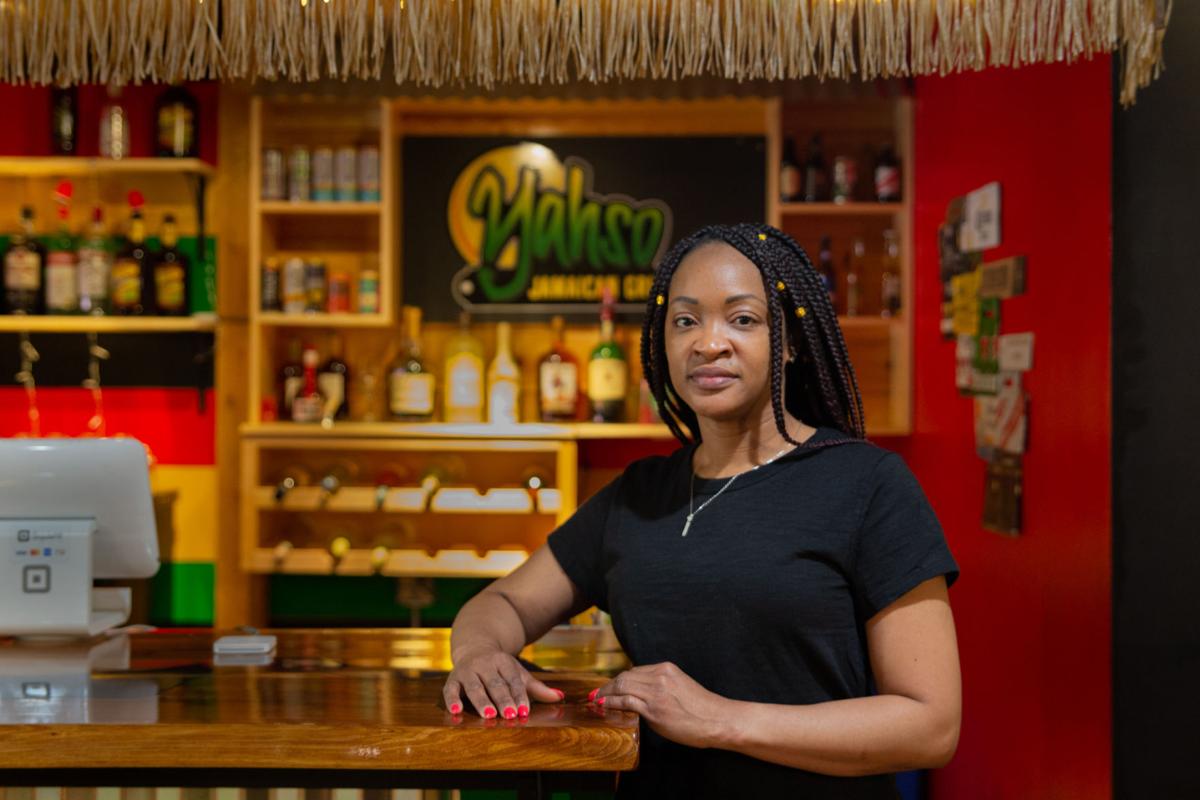 Gail Somers, owner of Yahso Jamaican Grille in downtown Keene, poses for a portrait in her restaurant before opening Wednesday. 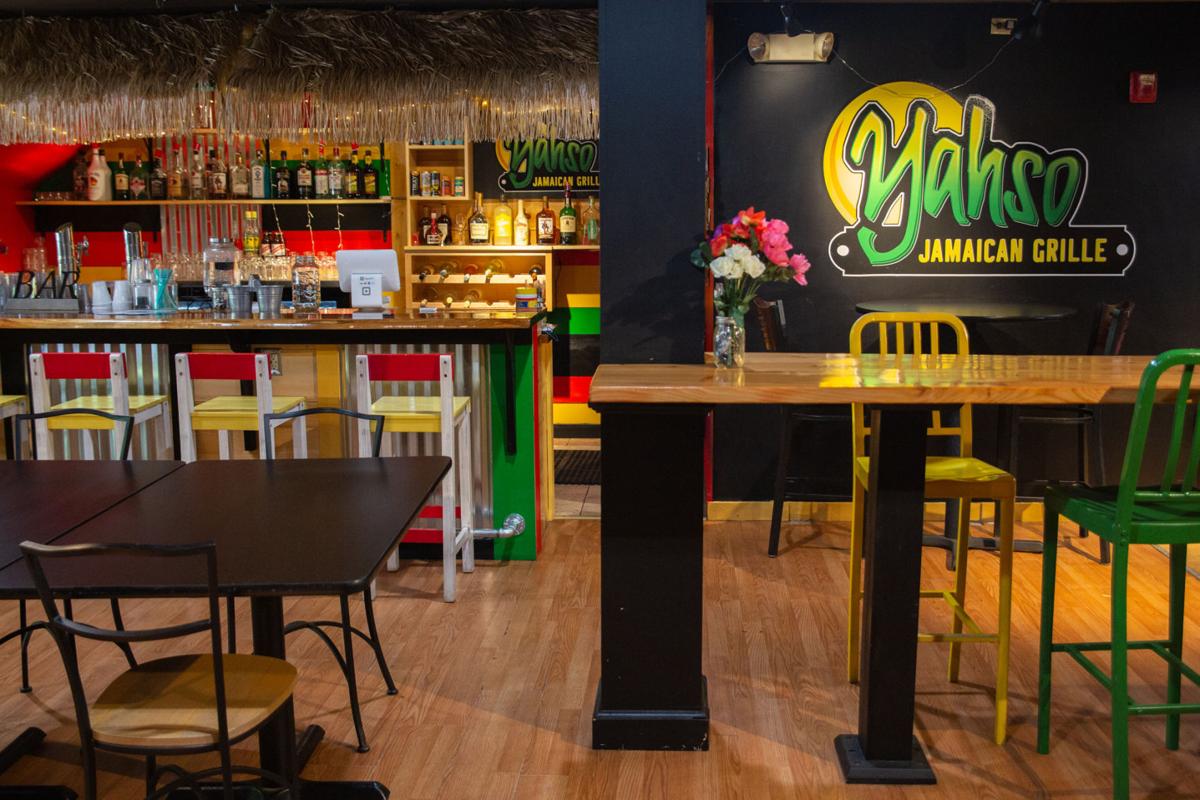 Gail Somers, owner of Yahso Jamaican Grille in downtown Keene, poses for a portrait in her restaurant before opening Wednesday.

The 43-year-old Keene resident has worked hard to get here, too, growing up in rural Jamaica before coming to the U.S. as a college student, earning two degrees and launching a successful career in the food business.

“Here” for Somers is her downtown Keene restaurant, Yahso Jamaican Grille, a name that translates from the island’s Patois language as — you guessed it — “right here.”

“So it’s an emphasis on a place, ... calling attention to that place,” Somers said. “So for me, yeah, we’re serving food, but I like to think we’re serving culture, as well.”

For Somers, Yahso is not just a restaurant, but a cultural hub where she regularly invites Caribbean musicians to play and shares her Jamaican culture through authentic dishes, many of which are made using her mother’s recipes.

“And especially in southwest New Hampshire, where we don’t have that much diversity, I like to think I’m adding to the fabric of diversity in the community,” Somers said.

Her commitment to diversity and inclusion extends beyond the restaurant, too. Somers serves on Keene’s ad hoc Racial Justice and Community Safety Committee and chairs the Keene Family YMCA’s Social Justice Committee. This summer, she said, she’ll also be working with the Greater Keene & Peterborough Chamber of Commerce on several diversity, equity and inclusion initiatives.

This work is especially important, Somers said, in light of the renewed racial justice movement that began last summer after George Floyd’s murder by Minneapolis police.

“And it’s important that it just doesn’t fan out, and the flame dies,” she said. “... The bigger issue is that Black and Brown people are still feeling very marginalized, and we need to talk about those things.”

Catherine “Catt” Workman, a Keene city councilor who works with Somers on the city’s racial justice committee, said Somers brings a fresh perspective and creative ideas to the group.

“She’s very diplomatic, and is able to express herself very articulately,” Workman said. “Even with the subject matter, it wasn’t always the easiest conversations that we were having and discussing, and she always brought the committee together.”

Somers was instrumental in drafting the committee’s report to the City Council, Workman added. The 11-page document outlines recommendations for how the community can address racism, including seeking more diverse employees in public agencies and increasing racial-bias training and awareness efforts.

Even before working together on the racial justice committee, Workman was a frequent customer at Yahso, which opened in May 2019 at 149 Main St. inside what is now The Piazza ice cream shop and moved to a larger location at 45 Main St. last March.

“I remember looking forward to the opening of the restaurant just because it was going to add diversity and increase restaurant options for people,” Workman said, adding that she eats there “easily about two times a week, if not more,” and that Yahso’s Caribbean shrimp and sweet plantains are among her favorite dishes.

Workman’s experience at Yahso is precisely what Somers envisioned for the restaurant, which she launched with her now 22-year-old son Andre Clayton after they spent several years sharing Jamaican dishes with friends and family at community gatherings.

“It was a big deal because we wanted to have a different food locally, as well, and for us, we felt like this would be great to share with the area,” Somers said. “Most people, even if they have not had Jamaican food, know Jamaica or know of the Jamaican culture around food.”

This culture, Somers added, is the one in which she grew up in Port Antonio, Jamaica, a city of about 12,000 people on the island’s northeastern coast. Her father, Keith Somers, worked primarily as a banana farmer, while her mother, Bertine, ran a small grocery shop.

“So from a very young age, having a dad that was a farmer and a mom that ran a little business, I think definitely those things contributed to my entrepreneurial spirit,” she said.

And though Bertine Somers died 23 years ago, she continues to influence her daughter’s life and career. As the oldest of 12 children, Bertine learned to cook at a young age, and later became the primary cook for her own children.

“And growing up, she just always placed that emphasis on making us a good meal, even when we didn’t have a lot,” Somers said. “So we didn’t do big Christmas celebrations or birthday celebrations. But Sunday dinner was a big deal. ... It was kind of her way of showing love and caring.”

This expression of affection through food also extended beyond their immediate family, Somers added. Whenever families came into Bertine Somers’ shop unable to afford food, she would find a way to give them a good meal.

“So for me, even at a younger age, I knew that food was so much about security, because I felt secure and I felt loved,” Gail Somers said. “I felt secure because my parents always had food, and took such care in preparing the food. I felt almost at an advantage because my dad had a farm, we had that little grocery shop, and my mom was always preparing great meals for us. And we would see people coming that just didn’t have that, and I saw the emphasis my mom placed on sharing something with them.”

Somers’ mother also prioritized education, which led Gail to pursue a college degree in business, first at the University of Technology in the Jamaican capital of Kingston before moving to Philadelphia, where she had some extended family, in the 1990s and studying at Villanova University. She took classes part-time, and also worked as a server at various restaurants, including many fast-food joints.

After graduating with her bachelor’s degree in finance, Somers got a job with Bimbo Bakeries, which makes brands including Entenmann’s and Thomas English Muffins. She worked there for about 10 years while living in the Philadelphia area and New Jersey. Along the way, she earned her MBA from St. Joseph’s University in Philadelphia before moving to Keene in 2013 for a job at C&S Wholesale Grocers.

This new career opportunity motivated the move, Somers said, but she has since fallen in love with the community, where her younger son, 16-year-old Alex Clayton, had a great experience at Symonds Elementary School and Keene Middle School before shifting to Northfield Mount Hermon School in Gill, Mass., for high school. Her father and her brother Keino Somers have both moved to Keene, as well.

“And I kind of made a personal connection to the area, coming from rural Jamaica,” she said. “So even though I’ve lived in more urban areas, I kind of still feel like I’m a rural girl.”

After seven years with C&S, Somers left the company last June to focus full-time on the restaurant. She said the COVID-19 pandemic has presented her with numerous difficult decisions, none more challenging than whether to close Yahso, or move to a new location.

“And I decided to not call it quits,” she said. “We had done really well. I think the concept was received really well. I knew I needed a bigger space, because we were in a teeny-tiny space, especially to showcase the culture, because there’s just so much to it — the food, the music, the whole just Jamaican vibe.”

And as more people get vaccinated against COVID-19, Somers hopes businesses like hers return to pre-pandemic operations. In the long-term, she wants to open a second Yahso location, perhaps in Manchester or Nashua, or maybe Brattleboro, she said.

For now, though, Somers plans to stay right here.

“We’re hoping that when people come here, they’re getting a good meal but they’re also getting a good vibe being here,” she said. “So, Yahso in Jamaica, it’s like somebody would say it’s a hopping, popping, popular [spot] — the place where things are happening.”

At a glance: Gail Somers