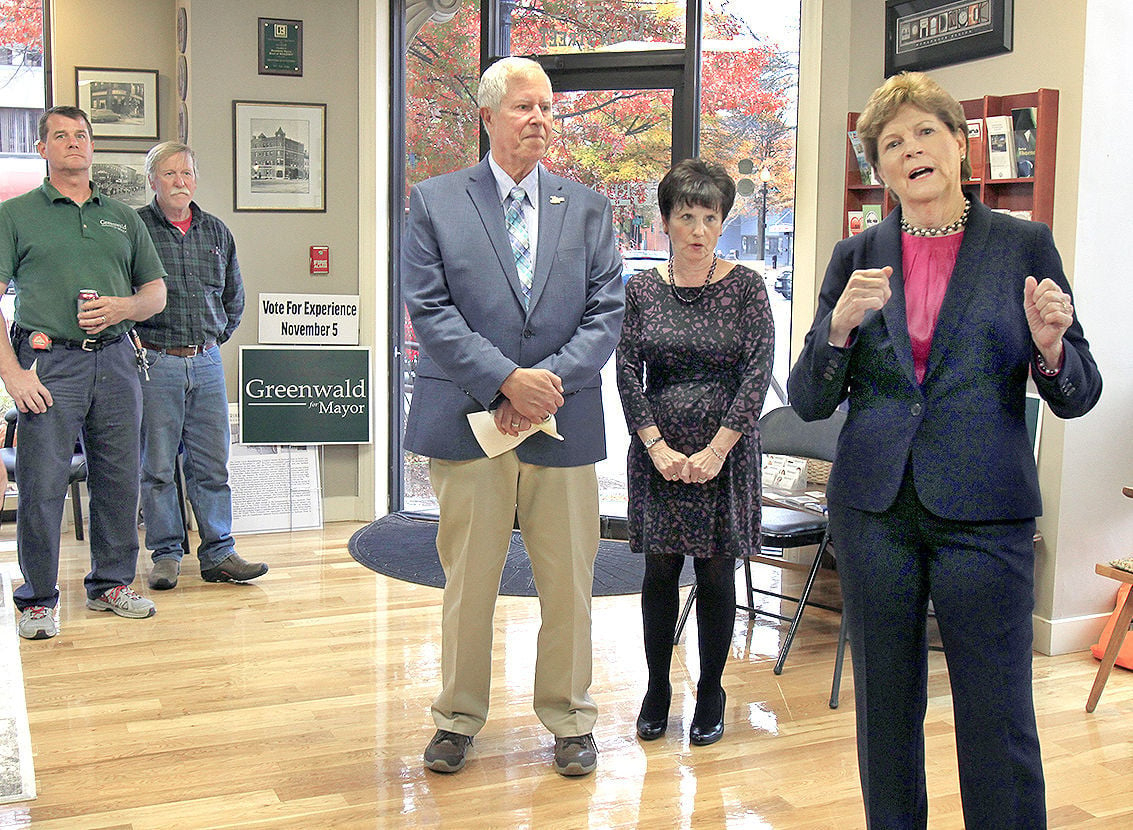 U.S. Sen. Jeanne Shaheen stops in at Greenwald Realty Friday to lend support to Mitch Greenwald in his run for Keene mayor. Greenwald, center, stands next to his wife, Erika. 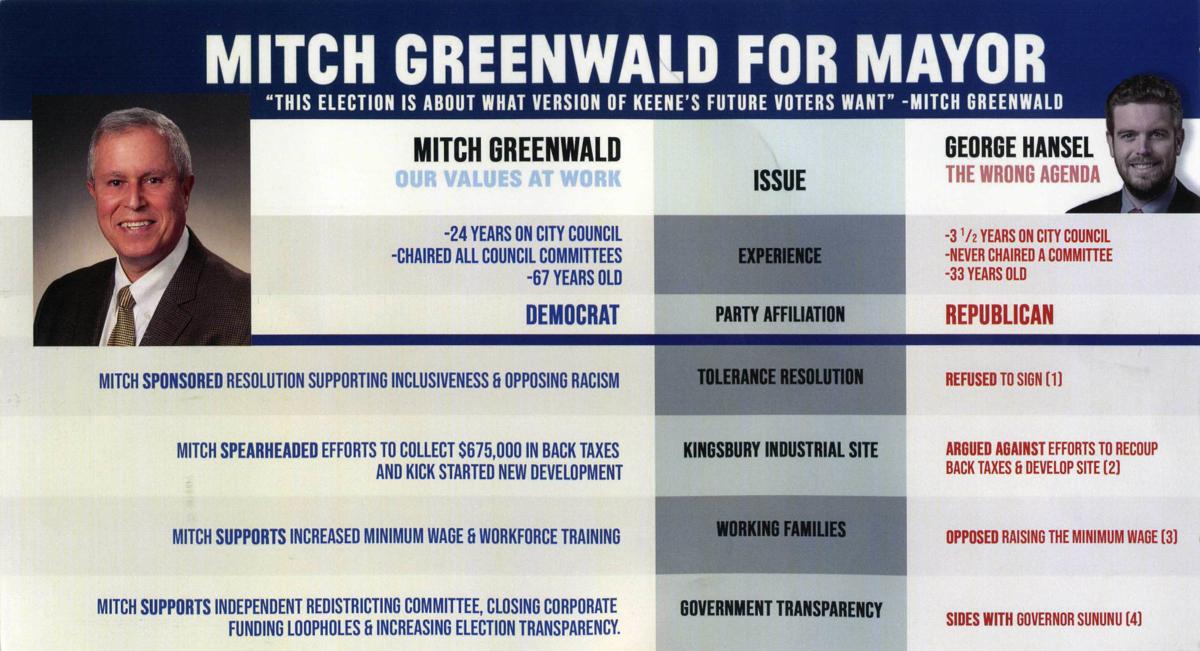 A common thread in Facebook comments, letters to the editor and chatter around the city indicates many Keene residents have observed a theme in this year’s mayoral race: the influence of partisanship.

The contest between City Councilors Mitchell H. Greenwald and George S. Hansel — a registered Democrat and Republican, respectively — has called into question Keene’s tradition of nonpartisan elections. While some residents decry the emphasis on party affiliation, others feel it’s natural to wonder about a candidate’s stance on a host of issues, regardless of whether a mayor will address those matters in office.

Greenwald says he’s not running based on party, but he’s made a point in campaign literature of noting he’s a Democrat, and Hansel a Republican. He’s also accepted campaign help from a staffer paid for by the state Democratic party.

Keene’s city charter includes a provision mandating that “all municipal elections and municipal primaries shall be nonpartisan in nature and no ballot shall show a designation of party affiliation,” unless required by state law. Often, mayoral candidates have come from the same party, and usually, the issue isn’t even raised publicly. That hasn’t always stopped candidates from making party or ideology an issue.

For Democrats running against Republican opponents, it’s a political strategy that makes sense. As of May, there were 7,595 registered Democrats in Keene compared to 3,366 registered Republicans — more than twice as many — according to the Secretary of State’s website. Another 7,865 voters were registered as undeclared.

Still, many in Keene feel the divisiveness of partisan politics is unwanted in a city election.

In a combined letter to the editor published Saturday, Mayor Kendall W. Lane and former Mayor Philip “Dale” Pregent asked voters to focus on what’s best for the city and leave national issues out of the race.

“After 12 years of combined experience serving as the mayor of Keene, we’ve been disappointed to see the dysfunction of partisan politics starting to seep into our local elections,” they wrote. (As of Monday, both Lane and Pregent have thrown their support Hansel.)

State Sen. Jay V. Kahn, D-Keene, wrote in his letter endorsing Greenwald: “For me, the political party of mayoral candidates should be known.”

“As the State Representative for Ward 1 here in Keene I believe the majority of my constituents, and the City of Keene over all, prefer candidates with liberal and progressive values,” state Rep. David Morrill wrote, also in support of Greenwald.

“While I understand that municipal elections are supposed to be nonpartisan and I appreciate the intention behind it I believe we need to look at what the candidates’ voting records and public comments have to say about their values and where they are politically,” Morrill wrote.

“I’m a lifelong Democrat, and on Nov. 5 I’ll be voting for George Hansel for mayor,” Rachel Eschle wrote in a letter.

Judith G. Wright also included in her letter that she’s a “proud Democrat.”

“Still, occasionally a local Republican makes a favorable impression and I consider giving him/her my vote. George S. Hansel is one such Republican …,” she wrote. However, she then added, “[Republicans] beat the drums of principles so far removed from their hearts and minds it is appalling. … I cannot envision myself ever casting a vote for any Republican candidate. So, sorry about George Hansel; he seems like a nice guy with good intentions.”

Some letter-writers have also cited that Mayor Lane sent Hansel to a meeting in Concord with Sununu and more than 30 municipal leaders regarding the governor’s budget veto as evidence of Hansel’s party links. Several writers contend Hansel is using the mayor’s office as a stepping stone to state office.

Though Hansel responded to an initial request for an interview Friday afternoon, he then canceled and subsequently could not be reached.

In an emailed statement Friday, he wrote that it’s “really sad that it has devolved to the point that outside partisan forces are injecting themselves into our local mayor’s race,” adding that he asked the state and county Republican committees to stay out of the race when he declared his candidacy.

Democrats at all levels have rallied around Greenwald, who’s nabbed endorsements from state lawmakers such as Kahn, Morrill, Rep. William Pearson and former state Sen. Molly Kelly of Harrisville, as well as the N.H. Stonewall Democrats. U.S. Sen. Jeanne Shaheen traveled to Keene to kick off a phone bank for his campaign Friday afternoon, though she emphasized afterward that she attended as a longtime family friend and not in her capacity as a senator.

One overt example of partisanship in the race is a mailer sent out by Greenwald, which on one side pits himself opposite Hansel, each with a list of qualities and positions. The third item on the list is party affiliation, with “Democrat” and “Republican” in large font. Greenwald’s side of the mailer is designed in several shades of blue, a color associated with the Democratic Party, with Hansel’s written in red, associated with the GOP.

Greenwald said he paid for the mailers and that his intent was to answer a question he constantly encounters from voters at events and on doorsteps. He argues that telling people his party affiliation doesn’t inject partisanship into the race.

In his social media advertisements and videos, though, Greenwald also espouses his positions on ideological issues commonly tied to party politics, such as raising the minimum wage and implementing so-called commonsense gun control — issues generally not dealt with at the city level in New Hampshire.

“It gets into core values, and I think it’s important for the public to know, what are my overall values about things that are not specific issues, because the issues keep changing,” he said.

Asked if raising the minimum wage is relevant to a Keene mayoral race, Greenwald answered, “Well to basketballs and potholes, you know, the specifics, no. But overall philosophy, yes.”

Candidates for local elections in Keene are not required to report campaign expenses or contributions, nor are political committees required to register with City Hall. The City Council discussed establishing such a policy over the summer — prompted by Councilor Terry M. Clark, a Greenwald supporter — but there was disagreement over what the details should include. City Clerk Patricia A. Little determined an ordinance couldn’t be crafted in time for this election, and the proposal was put on hold.

Greenwald voluntarily disclosed his campaign expenditures to The Sentinel, which he said add up to about $18,000. That includes approximately $9,800 in contributions, he said, and all funds have been used on materials such as advertising, signs, mailings, shirts and supplies. Greenwald hired a company out of Connecticut, recommended to him by Kahn, to design many of his ads and produce two videos.

He underscored that he hasn’t accepted any contributions from political organizations.

In Hansel’s emailed statement, he wrote that his campaign has been funded by donations from local friends and family, as well as his own money.

Asked how much money the N.H. Democratic Party has spent on the mayoral race in Keene, spokeswoman Holly Shulman said, “we don’t talk about campaign strategy.”

Although Greenwald said he hasn’t taken any funds from the state party, he does have the assistance of a paid staff member, Tristan Voegeli.

Greenwald said Voegeli helps with scheduling and “guidance and moral support at times.”

“It’s just assistance like that,” Greenwald said. “He’s not out putting up signs, even. It’s just very very mild.”

Voegeli, a municipal organizer from Minnesota hired by the state party, appears as multiple characters in Greenwald’s video advertisements and has been seen at several campaign events. According to a job description Shulman sent via email, municipal organizers are responsible for organizing and executing phone banks and door-knocking canvasses, recruiting and managing volunteers, and representing the candidates in person and online, among other duties.

Greenwald said he doesn’t consider Voegeli’s help on his campaign the same as accepting monetary contributions from the state Democratic Party, and he equated the situation to anyone who might offer assistance.

Regarding Voegeli’s wages, Shulman referred to the N.H. Democratic Party’s filings with the Federal Elections Commission. The latest report, which covers through Sept. 30, does not include Voegeli on the organization’s payroll.

Voegeli wasn’t reachable for comment. He also works with other municipal campaigns in his “turf,” which includes Keene, Claremont and other areas, Shulman wrote in an email. She clarified that he isn’t working exclusively with mayoral candidates.

Asked how much time Voegeli spends in Keene, Greenwald wrote in a follow-up email: “I don’t monitor his time. He helps out with several candidates around the state. He absolutely does not spend all his time assisting my campaign.”

The two candidates will square off directly in a debate Wednesday at 6:30 p.m. at Keene State College’s Redfern Arts Center, sponsored by The Sentinel. The event will also be live-streamed on The Sentinel’s Facebook page.