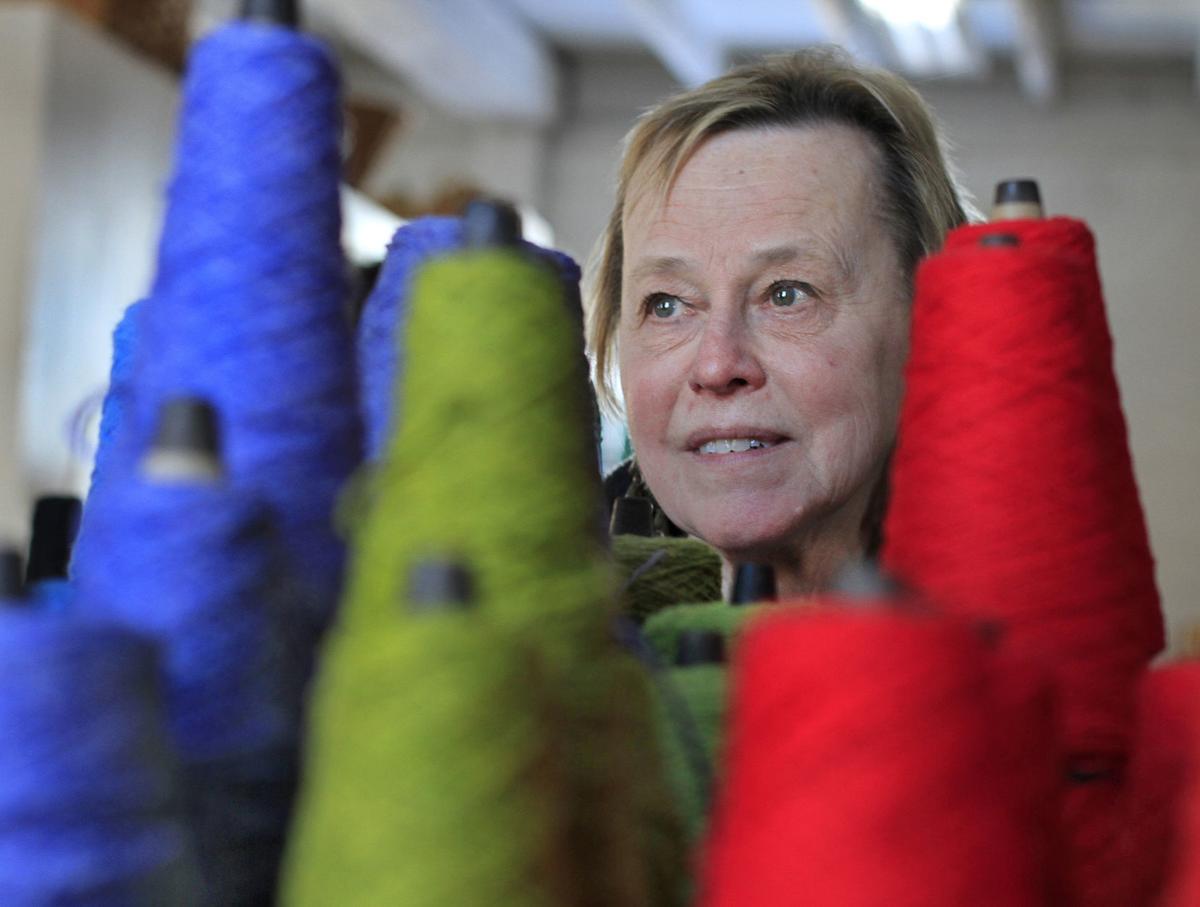 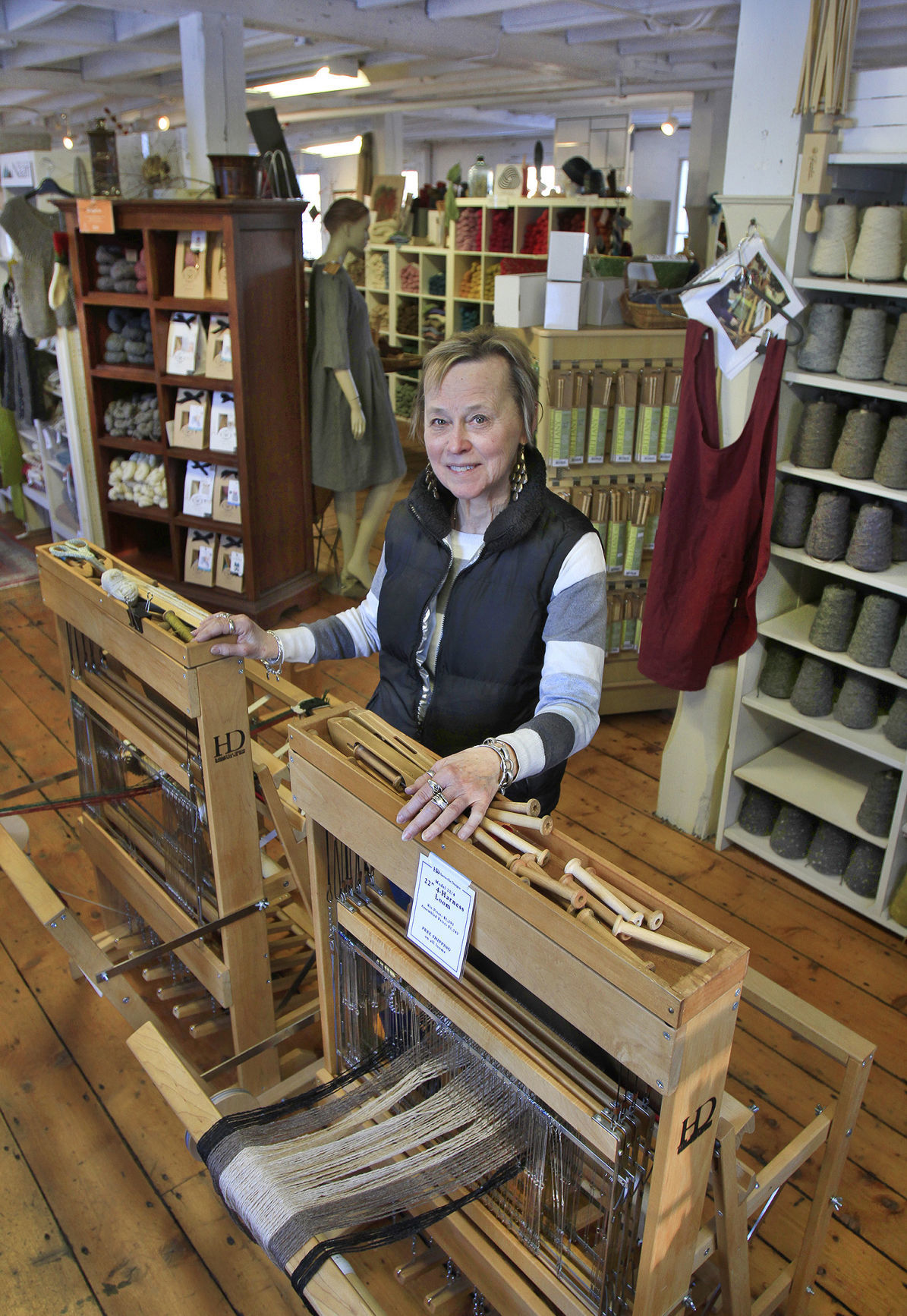 Paula Papoojian of Harrisville, at Harrisville Designs, where she works as a clerk after retiring from a career in education.

Paula Papoojian of Harrisville, at Harrisville Designs, where she works as a clerk after retiring from a career in education.

HARRISVILLE — As if the frozen-in-time mill town didn’t already have the feeling of being cast under a spell, a clear sign told Paula Papoojian she belonged in Harrisville.

Whether caused by a deity or a cheat code in the space-time continuum, Papoojian (pronounced “pah-POOH-jin”), the clerk at Harrisville Designs and founder of Warm Hands, Warm Hearts, recalled a prescient journal entry suddenly resurfacing.

It was late 2009, and she had just moved to Harrisville after retiring from a career in education in Central Massachusetts as an elementary and middle school teacher. She’d also worked as an education coordinator evaluating teachers.

“So ... I’m going up in the attic, and I’ve got a stack full of journals, because I bring them all with me,” Papoojian, 70, recalled. “So I get upstairs, and of course, I tumble the pile.

“And one of them fell open to a page — and this is the truth — and I just happen to pick it up,” she continued, “and I looked at the page, and it said, ‘I went to Harrisville Designs today.’ Oh! So I kept reading, and by the time I got to the end of it, it said — no lie — ‘I hope when I retire, I can work there.’ ”

Since whenever that entry was made in the early 2000s, it bore out. Papoojian now works at the historic sewing and loom supply shop in the old textile mill during the day, and takes her love of yarn to the general public every winter with her charity, Warm Hands, Warm Hearts.

The hats and gloves drive is only in its third year, but it has grown rapidly, much to Papoojian’s surprise, she says. Nearly all of the donated articles are handmade.

In 2017, she got a few friends involved and was able to donate between 150 and 200 accessory items to places like the River Center in Peterborough, Southwestern Community Services in Keene and Head Start in Jaffrey.

“It came about from someone very close to me who had had a very similar circumstance of homelessness without [warm clothing] and had other issues,” Papoojian said of the conception of Warm Hands, Warm Hearts. “And so I felt, you know what? There’s gotta be more people out there with this kind of thing.

“So I started looking around, and that’s when I believe I connected with [Southwestern Community Services] in Keene,” she continued.

She said she was taken by the spirit of the young men there trying to recover from addiction by getting out in the community, and felt compelled to do one of the things she knows best.

“So I went nuts and knitted them all hats,” she chortled. “So that’s how all that started.”

Papoojian said she was surprised in 2018 to see the number of donations grow to 400, with more volunteers knitting scarves, hats and mittens, filling boxes to be delivered around the holidays.

Then came this past year, when her once shoestring operation broke 1,000 accessory items.

“... I almost fell off my chair,” she said of when she found out recently. “I mean, I don’t know where it all came from, but I do know, for example, there’s one woman in this community — and I wasn’t here when she delivered them — she made 89 pairs of mittens.”

The initiative has brought the best out of the Harrisville community and from the greater Monadnock Region, Papoojian said, even reaching some donors in Greenfield.

Papoojian said her love of giving back and bringing people together over a shared activity — particularly knitting — goes back to her Bay State childhood.

Her mother, Hendrika, would knit in the living room with a young Paula by her side, imitating the intricate patterns as best she could.

“Probably I was about 10 years old, I would say, and I would sit by her chair, and I don’t really know really what I was doing when I was doing it, because to first learn how, it was kind of funny,” Papoojian chuckled. “And then when I got a little bit older, I was really interested. I mean, I was knitting sweaters when I was in high school.”

Papoojian’s true professional love came after getting her bachelor’s and master’s degrees in education and reading from Fitchburg State University in the 1970s, and she would go on to teach elementary and middle school before getting a certificate from Lesley College in Cambridge, Mass., in 2000 to help teachers evaluate their own classroom performances.

“I mean, these teachers I had been with for a number of years, so it was really important that I could get a rapport with them to allow me to videotape them,” she said.

In retirement, Papoojian said, she keeps a sentiment shared among several other retirees in Harrisville, which is why the design store and the charity continue to bring value to her life.

“There’s also a lot of people, my age and older, that have a skill and still feel useful,” Papoojian said.

“Most of the ones — we have some that are professionals as well that do this — but people just want to donate their time,” she said.

Papoojian recalled one mother last year bringing her four kids to the store for an afternoon of knitting, and the children wove their own holiday gift tags into the hats.

“So I mean, it’s reaching to the kids giving back, which is another lesson I want to see,” she said. “And I think Harrisville, and the company too, look for ways to give back to the community. This community is amazing to me.”

And were it not for that fortuitous visit to town and journal entry years ago, perhaps Papoojian may have never found that perfect fit.

“When I tell the story to people, they get goosebumps, and they’re like, ‘That’s weird,’ ” Papoojian said.

At a glance: Paula Papoojian