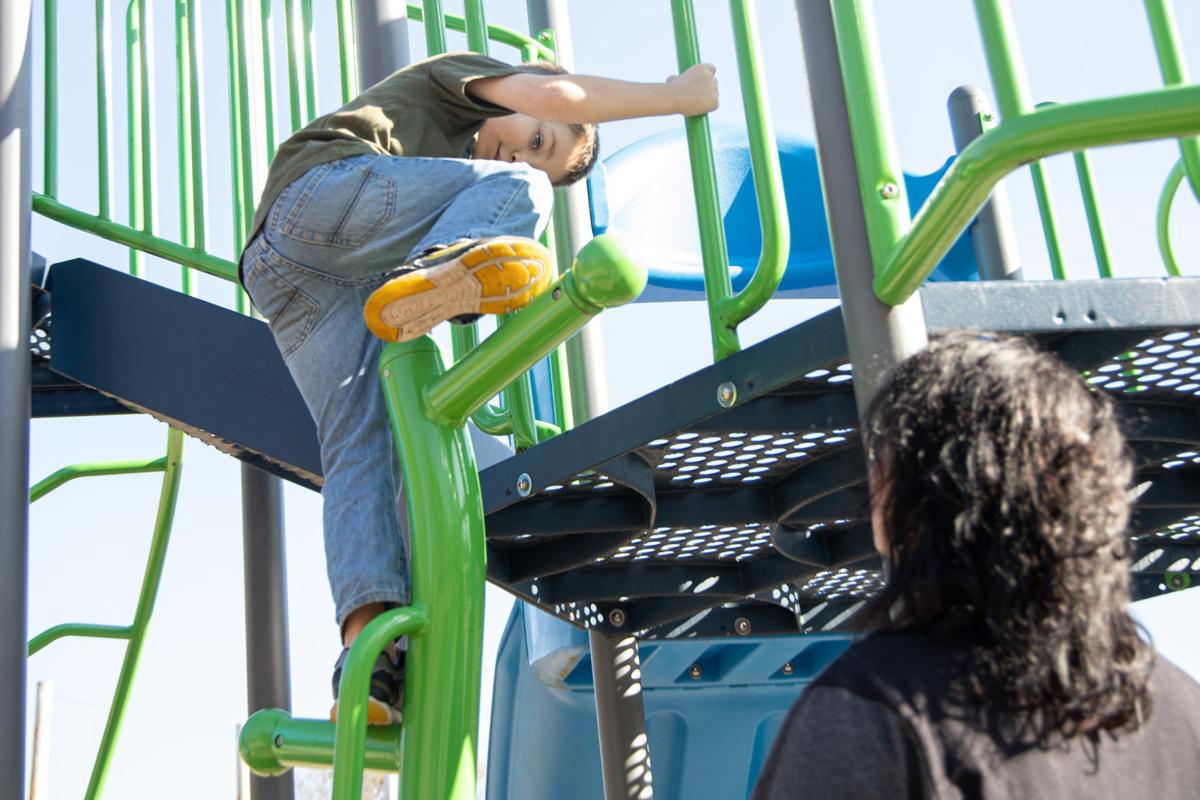 Tracy Hardy of Jaffrey watches her 5-year-old son Daniel Hastings on a playset at Humiston Field Friday. The pandemic put her in a common bind: working full-time, from home, while caring for a young child. 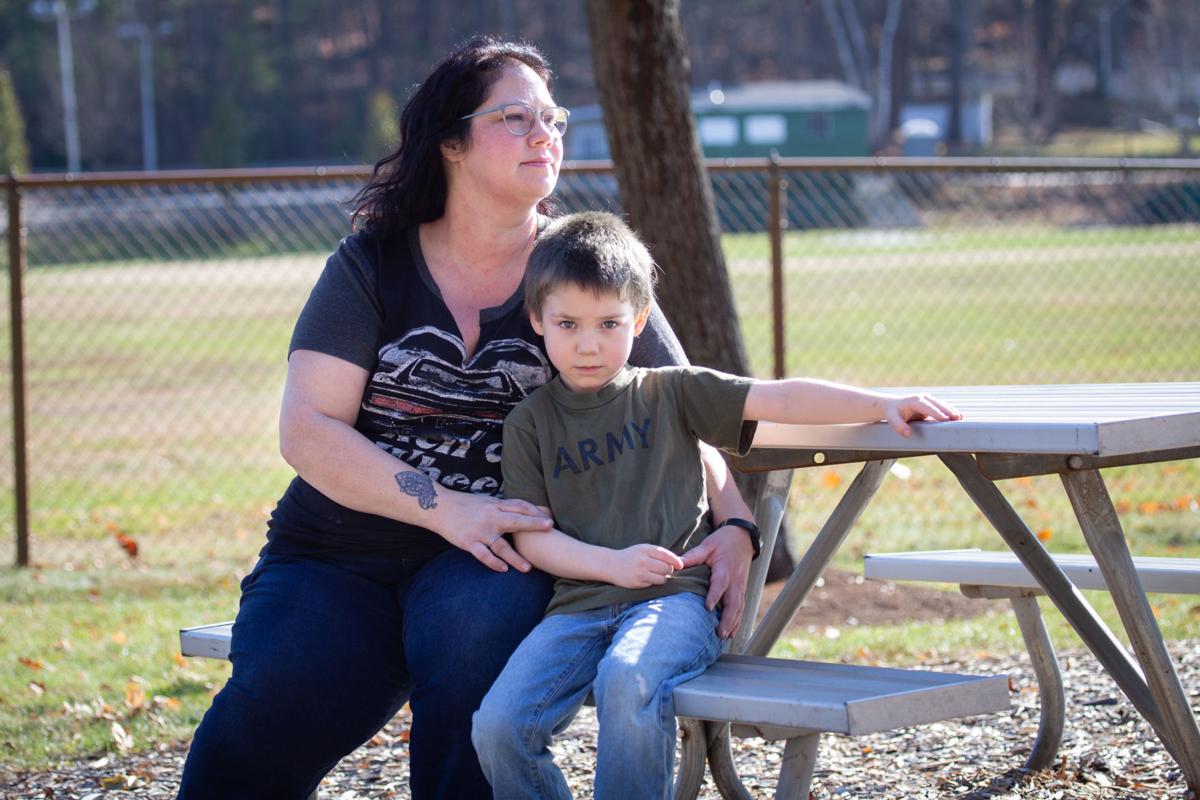 Tracy Hardy of Jaffrey, shown with her 5-year-old son Daniel Hastings at Humiston Field Friday, faced a common challenge amid the COVID-19 pandemic — working full-time, from home, while caring for a young child.

When the COVID-19 pandemic first struck New Hampshire in mid-March, Tracy Hardy faced a parental problem that suddenly became almost ubiquitous: How could she continue working full-time, from home, while caring for her young child?

“It was fun,” Hardy, of Jaffrey, said, with a laugh. “Obviously I say that completely sarcastically. It was not fun at all. ... It was awful.”

Hardy, 46, is a single mother of three sons. Her two older children are in their 20s, but the youngest, Daniel Hastings, is 5. His daycare center, Monadnock Community Early Learning Center in Peterborough, closed temporarily due to the coronavirus outbreak in mid-March, around the same time Hardy’s job as a customer service representative at a direct-mail company in Peterborough transitioned to remote work.

Hardy’s oldest son, Kevin White, 25, also lives with them, and helped keep an eye on Daniel while she worked. But still, her biggest challenges became “keeping [Daniel] entertained without allowing him too much screen time or free rein to destroy the house while I was trying to focus and work,” she said in a recent interview.

Conference calls, which Hardy had several times a week, became difficult with Daniel there, “because he’s completely content until you get on the phone, and then they want your attention,” Hardy said.

Even before the pandemic, she struggled to find affordable, reliable child care for Daniel. He was on a wait list for a spot at the Peterborough learning center for about two years, she said. During that time, when Hardy and her family lived in Swanzey while she worked in Peterborough, Daniel went to daycare at Kids Club in Jaffrey.

“Actually, before he got into Kids Club, he was going to my sister’s for a little while, so I was driving from Swanzey to [my sister’s in] Winchester to Peterborough and then back, because there’s just no young child daycare available,” Hardy said.

Her experience is far from unique in the Monadnock Region, or even throughout the state. Last year in New Hampshire, there were 32,780 spaces in child care centers, but 54,019 children whose parents or guardians worked full-time, according to statistics gathered by Child Care Aware, a nonprofit that works with state and local child care agencies nationwide.

That meant that before the pandemic, at least 39 percent of Granite State kids in working families did not have access to licensed child care while their parents were at work. The situation only worsened when COVID-19 hit, schools suspended in-person classes statewide and child care centers closed across New Hampshire, according to Child Care Aware. As of July, the organization reports, more than 200 had shut their doors.

And while many daycares, including Monadnock Community Early Learning Center, have reopened, the coronavirus outbreak continues to exacerbate the existing strains on the child care system.

Jess Carson, a professor at the University of New Hampshire, co-authored an August paper for the school titled “COVID-19 Didn’t Create a Child Care Crisis, But Hastened and Inflamed It.”

“Today, the pandemic has made broadly evident what was already clear to America’s parents, employers, and care providers: the nation’s early childhood care system is fragile,” Carson and co-author Beth Mattingly, an assistant vice president in the Regional and Community Outreach Department at the Federal Reserve Bank of Boston, wrote. “Working parents face intersecting challenges as they seek high-quality, affordable care that is suitable for the ages of their children and available when and where they need it.”

The central problems, Carson said in a recent interview, are that child care providers don’t generate enough revenue to pay staff members well, making it difficult to find employees, while simultaneously, care is too costly for many families to afford.

These challenges have affected the Monadnock Region since before the coronavirus crisis. The Keene Family YMCA, one of the largest child care providers in the area, has a waitlist that predates the pandemic, CEO Dan Smith said.

“And part of the reason for that waitlist is that we couldn’t find staffing,” he explained in an interview in late September. “Prior to COVID, nationwide, child care has a staffing issue. The credentials needed to be a lead teacher in a preschool program across the nation generally require some college education, yet the wages for that are super low, and in most instances, lower than a livable wage.”

Before the pandemic, the YMCA had a waitlist of 76 families looking for child care, Smith said. Today, there is no wait list because the Y has added additional child care spots in response to the pandemic, and fewer families are seeking child care, either because parents are working from home or because they are not comfortable sending kids back to a daycare setting.

“Child care is a labor-intensive field, requiring many staff to care for children at mandated child-to-staff ratios, but the wages of individual workers are low,” they wrote. They added that this dichotomy exists because child care is a private-pay system, and receives limited government funding.

COVID-19 protocols — such as limiting cohort sizes, providing personal protective equipment and potentially adding more physical space to allow for distancing — have only made providing child care more expensive, while decreasing the number of people paying tuition, due to the smaller group sizes.

“Within our community, there were not enough available, affordable seats to provide child care for those that wanted it,” Smith said. “And so some parents were looking for child care, and discovered the costs were so high that if they, in fact, used child care, then they’d be working simply to pay for child care.”

According to the Economic Policy Institute, a nonprofit, nonpartisan think tank based in Washington, D.C., child care for infants, the most expensive age group to provide care for, costs New Hampshire families an average of $12,791 per year, or $1,066 per month.

That means infant care makes up 15.3 percent of median family income in the state, more than double the 7 percent of a family’s income the U.S. Department of Health and Human Services considers affordable for child care, according to the EPI.

“It’s definitely not cheap,” Hardy, the mother from Jaffrey, said. She added that she pays $400 to $500 a month for Daniel’s care at Monadnock Community Early Learning Center, which offers a sliding scale for payments. She also noted that her child care payments are on the lower end of the sliding scale, and cost roughly half of her monthly rent.

Hybrid schooling and the search for solutions

Daniel Hastings is now back full-time at Monadnock Community Early Learning Center, which reopened over the summer, allowing Hardy to return to work in her office. The center added a kindergarten class, which it had not offered in recent years, Hardy added.

“So had they not implemented kindergarten this year, I would have had no alternative daycare” that would have allowed her to return to her office full-time, she said. If she had put Daniel in public-school kindergarten, he would have been attending a mix of in-person and remote classes, which she didn’t feel was best for him.

“Consistency is really important, especially for Daniel, but for any 5-year-old,” she said.

Most area schools have reopened this year with a hybrid model of in-school and online instruction, with students in school only a few days a week, leading to even more stress on the child care system. For instance, students in the Keene School District go to school two days a week, and learn remotely the other three.

“So, if you’re a working parent, you have a five-day-a-week problem, and you’ve only answered two with school,” Smith, of the YMCA, said. “What do you do the other three, and how do you make sure that on those other three days, your child is actually doing the school work that they’re supposed to be doing?”

Organizations like the Y have helped fill those gaps by providing child care for school-aged kids during the day, which it hasn’t done historically. And Brown, the organization’s child care services director, said the Y will continue working to expand access to safe, affordable and reliable child care.

“It’s certainly a problem,” she said. “But as far as solutions go, it’s an ongoing discussion, for sure.”

Overall, though, Carson, the UNH professor, said child care providers and families “are kind of scraping by in whatever ways they can” to address the unique challenges presented by the pandemic, while still grappling with high costs for families and child care centers, and low wages for employees.

“Really, in the short term, the solutions are still sort of a bit of triage in that people are just sort of trying to keep everybody healthy and keep their doors open,” she said, “because the bottom line, like always, is that the math just doesn’t work out.”

This project is supported by a competitive grant from the nonpartisan Solutions Journalism Network. The Sentinel retains editorial control over all reporting.

When COVID upended child care, parents and providers got creative

There’s not much that the COVID-19 pandemic hasn’t touched, from the ways we work, learn and relax to the faces we see on a regular basis. The…