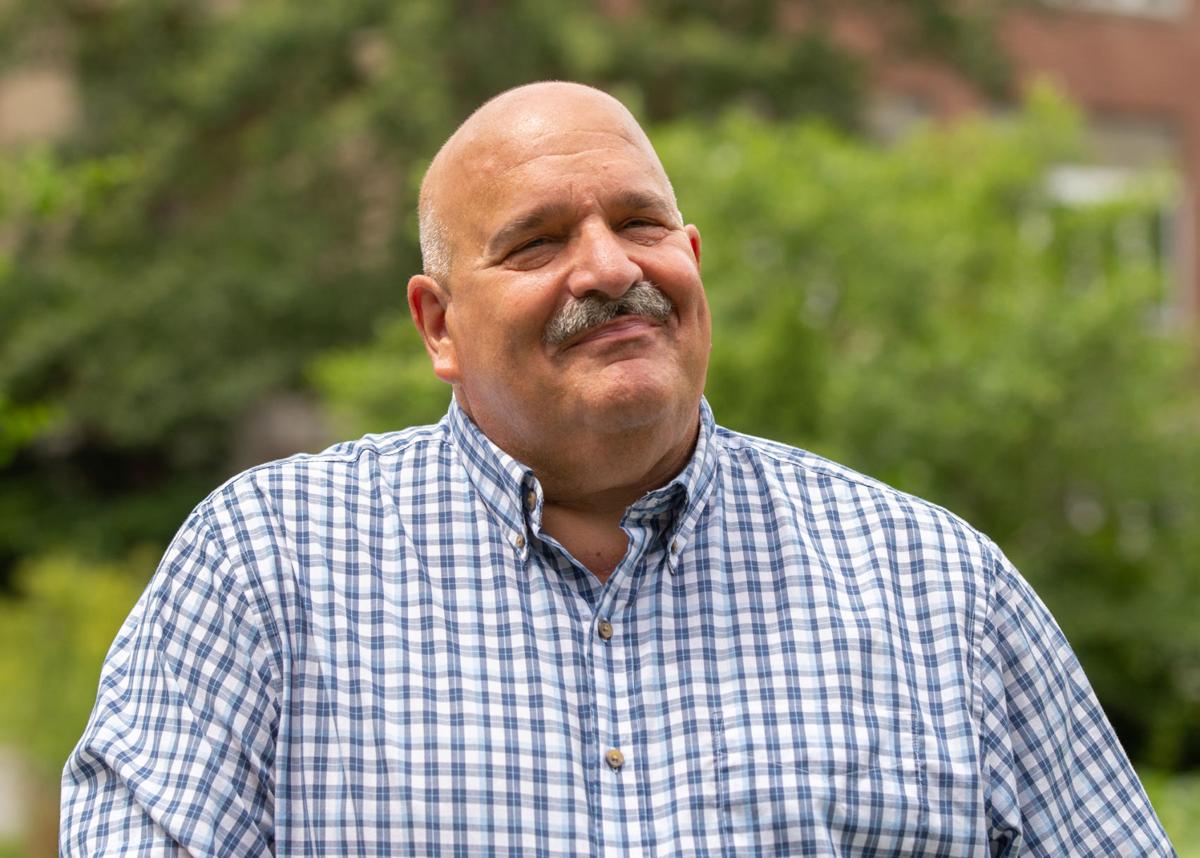 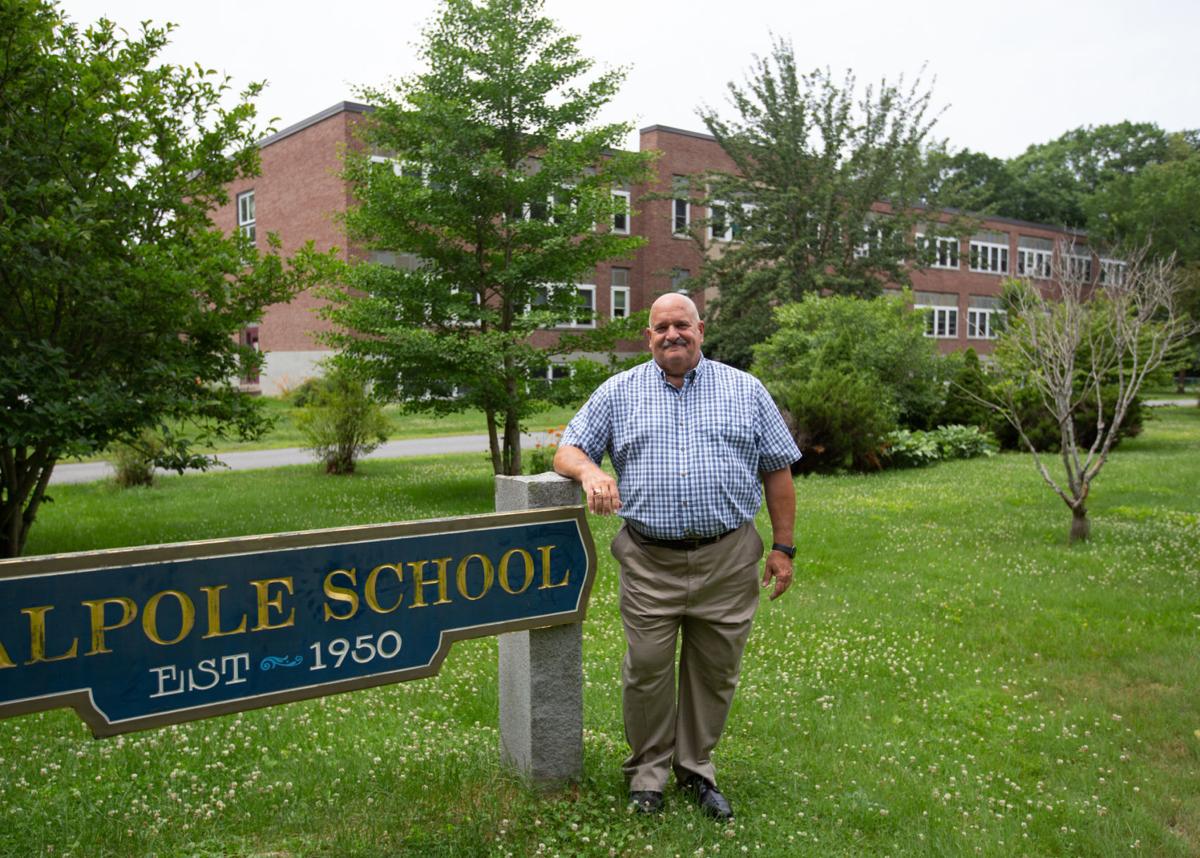 Sam Jacobs, shown outside Walpole Elementary School on Thursday, recently retired as the principal of the preschool through 8th-grade schools in Walpole. Jacobs worked in the Fall Mountain Regional School District for his entire career.

Sam Jacobs, shown outside Walpole Elementary School on Thursday, recently retired as the principal of the preschool through 8th-grade schools in Walpole. Jacobs worked in the Fall Mountain Regional School District for his entire career.

At a young age, he can recall asking his dad, also named Sam, for a chalkboard and old textbooks to set up a makeshift classroom in the basement of his childhood home in Essex Junction, Vt.

“My poor younger brother Mark, I can remember making him sit there and he would be my student,” Jacobs, now 62, said with a laugh. “The poor kid would be going back to school during our summers.”

Jacobs, of Springfield, Vt., has come a long way since those days. A pillar of the Fall Mountain Regional School District for more than 40 years, he retired in June as principal of the Walpole schools.

Jacobs was with the Fall Mountain district — which covers Acworth, Alstead, Charlestown, Langdon and Walpole — for his entire career, starting as an agriculture teacher at the high school in 1976.

A fresh graduate from the University of Vermont with a bachelor’s degree in education and horticulture (a nod to his love for gardening), Jacobs admitted he wasn’t the best at looking for employment.

It wasn’t until that August — when his mother, Ellen, told him he needed to get serious about finding a job — that he came across the position at Fall Mountain.

“I can remember driving down with a friend and applying for the job,” Jacobs said. “... And that was really the only opening I knew of back then.”

Agriculture wasn’t often embedded into curriculum at the time, Jacobs explained, so when he chose his second major, he was frankly just hoping it worked out that he could teach it.

Fall Mountain had already established an agriculture program before Jacobs arrived, but the teachers in it had all left.

“Forming a program was the first few years for me, of getting it going and getting it back to [being] a program, and that was fun ... I loved the challenge,” he said.

Since then, the program has grown to include more teachers and a “very successful” Future Farmers of America (FFA) club — an intracurricular student organization for those interested in agriculture and leadership.

Jacobs remained at the Langdon high school for 17 years, while simultaneously holding the role of dean of students — which acts as an assistant principal — for the last three.

Being the dean of students motivated him to seek another leadership position, leading him to become principal of the preschool through 8th-grade schools in Walpole, which consist of Walpole Elementary School, North Walpole School and Walpole Primary School.

“I realized that, if you really want to have an impact on schools — and I really wanted to take on that challenge — then become principal,” Jacobs said.

But as one might expect, the shift not only from teacher to principal, but also from high-school students to elementary kids, took some adjusting — like, for example, figuring out how to help a kindergartner throwing a tantrum.

“It was not easy,” Jacobs said, laughing. “It was a learning curve for a couple of years, but the Walpole teachers were really helpful.”

He developed a strong bond with the students over the years, with one of the more memorable moments being the annual “air band” performances.

At the end of each school year, students and school staff have a field day in the morning and then air band in the afternoon, where kids lip-sync and dance to songs for their fellow classmates.

Once the children finish, school staff put on their own show, with songs like Barry Manilow’s “Copacabana” and Tina Turner’s “Proud Mary.”

“The kids would just go bananas when they saw the staff,” Jacobs said.

Kelly Patch, whose four children had Jacobs as a teacher, dubbed him the star of air band.

From activities like that to what he taught in the classroom and hallways, she said Jacobs went “above and beyond” for his students.

As a way to honor him, Patch, of Walpole, and a group of other mothers started the Sam Jacobs Scholarship Fund in 2020.

The $1,000 per year scholarship — which has already honored four students since it began — is given to two students annually who graduated from Walpole Elementary School and plan to attend a post-secondary school.

She said Jacobs gave out a similar award to one eighth grader each year, based on community service and acts of kindness.

“We decided it would be a good idea to make a scholarship in his name using those same principles,” Patch said. “... People definitely respect him.”

Those who’ve donated to the fund have expressed a similar sentiment as Patch.

“All three of my children and one grandchild attended Fall Mountain schools under Mr. Jacobs,” wrote Paulette Sharkey. “He really did make a difference in so many lives, and I love this idea of leaving a Legacy!”

Jacobs said he spent most of his final year as principal mentoring his successor, Justin Cassarino, who was a fifth-grade teacher at Walpole Elementary School.

The school decided to look internally for his replacement because last year — when Jacobs had initially planned to retire — the final candidate ended up not taking the job.

“We opened up interviewing again, and then the world was shutting down, so we looked in house and we were so fortunate,” Jacobs said.

Now fully in his retirement, Jacobs said he’s taking it easy for a while, with future plans to travel, particularly somewhere warm for the upcoming cold months.

He admitted it’ll be difficult not heading back to school this fall. He’ll miss seeing his staff and, of course, the students too.

On the last day of school, he said, it’s always hard to say goodbye to the kids, especially those who are graduating. Over his years as an educator, Jacobs got used to it.

But on his final last day of school on June 17, it was nothing but emotions.

“It was the hardest thing I ever had to do,” Jacobs said. “It was really tough. It’ll take a while for me to get over it.”

At a glance: Sam Jacobs