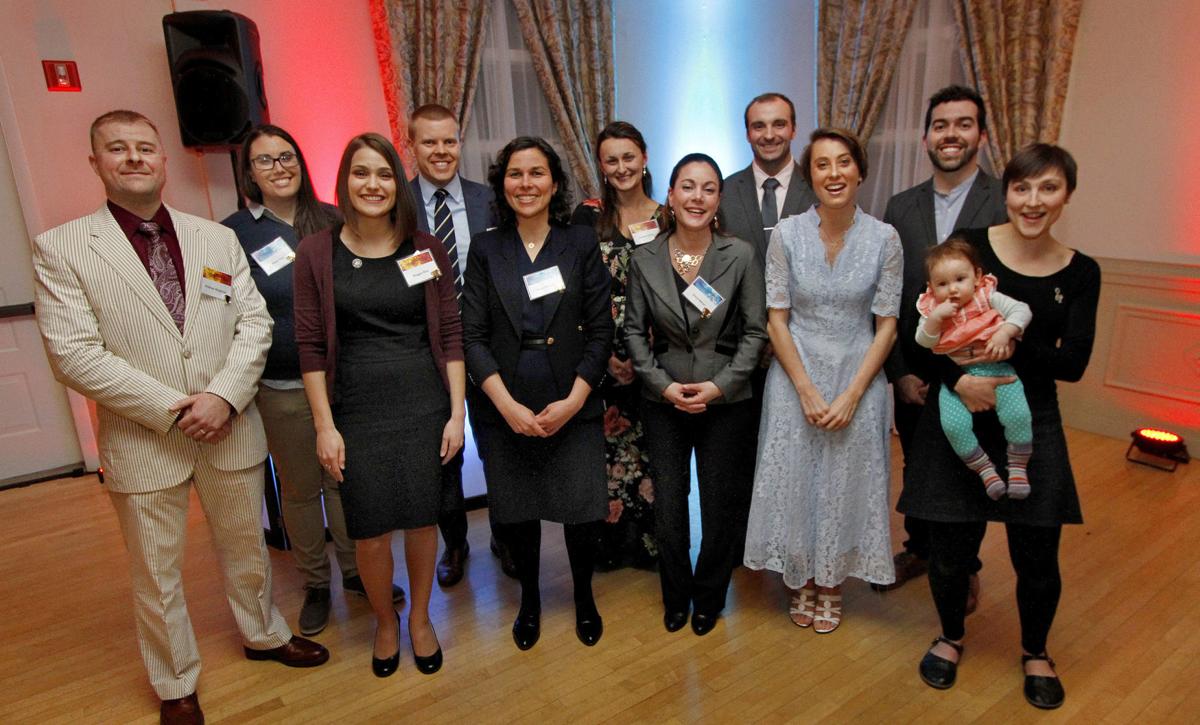 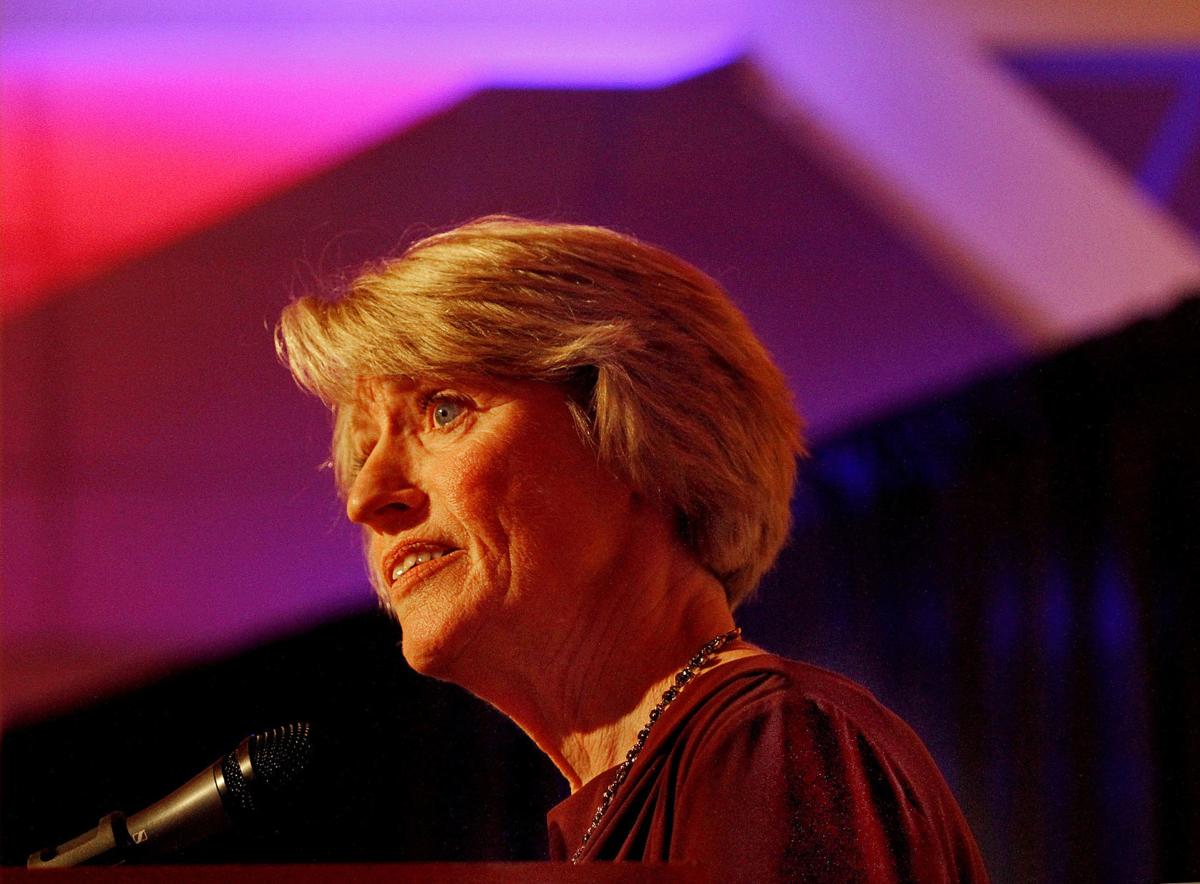 Trendsetters award speaker Kim Mooney, president of Franklin Pierce University, said she has made a concerted effort since taking her position in 2016 to create more partnerships between Franklin Pierce students and local businesses. 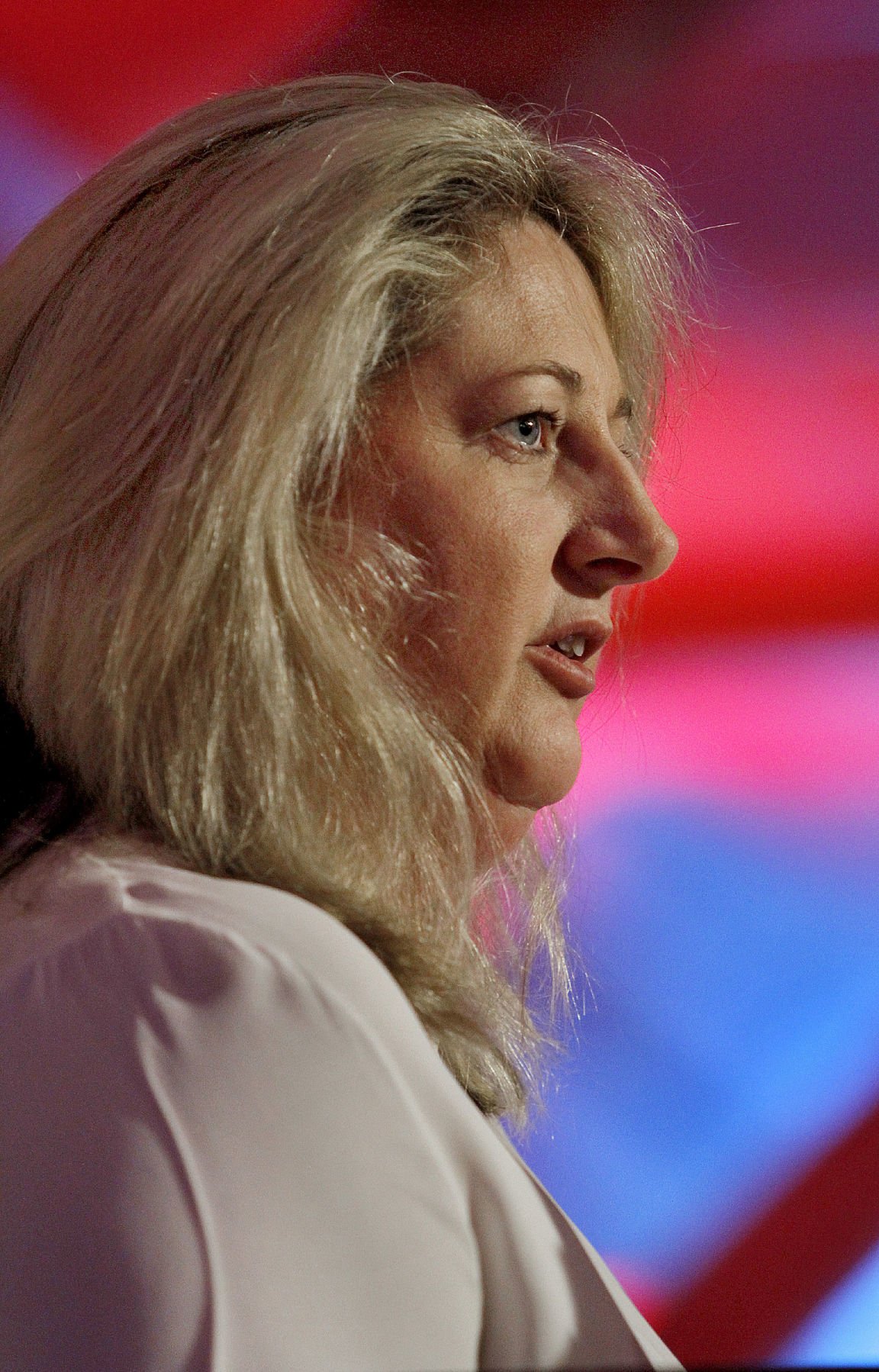 Trendsetters awards speaker Lorraine Hammond, human resources director for Markem-Imaje in the U.S. and Canada, said the company has supported Trendsetters as a sponsor because it wants to continue to “encourage others to think differently, to step up, but also to recognize those in the community who endeavor to make Keene and the surrounding area a better place to live.”

Trendsetters award speaker Kim Mooney, president of Franklin Pierce University, said she has made a concerted effort since taking her position in 2016 to create more partnerships between Franklin Pierce students and local businesses.

Trendsetters awards speaker Lorraine Hammond, human resources director for Markem-Imaje in the U.S. and Canada, said the company has supported Trendsetters as a sponsor because it wants to continue to “encourage others to think differently, to step up, but also to recognize those in the community who endeavor to make Keene and the surrounding area a better place to live.”

While it can be said of all the recipients of the 2018 Trendsetter Awards that they’ve shown entrepreneurial spirit, strong work ethic and grit, a trait they also share is their dedication to giving back to the community they call home.

This year’s fifth-annual event, held Thursday night at the Keene Country Club, honored 11 local, standout young professionals who, in both work and service, are making a difference in the region.

Find videos of all the Trendsetters here.

“In reading the profiles of our Trendsetters this year, I was struck by a common theme — how important the region is to each of them and their attachment to it,” Terrence Williams, president of The Keene Sentinel, told attendees at Thursday’s event. The Keene Publishing Corp. also produces The Business Journal of Greater Keene, Brattleboro and Peterborough, a co-host of the event along with the Keene Young Professionals Network.

“They are here because they love what this area has to offer them and their families and the environs in which they work.”

But more than just a feel-good notion, this is one of the keys to not only attracting, but retaining young workers and entrepreneurs in the region. Mayor Kendall W. Lane pointed out the need for the region to focus on economic development. To do that, he said, business and civic leaders must take a close look at the assets in the area that might make it more attractive to businesses looking to come here.

“But the strength — the real asset that businesses are most interested in, that is most attractive for this region, is the people,” Lane told the audience. “We are very fortunate tonight that we can recognize 11 young professionals who play a major role in the success of this region. It is their ideas, their energy and vitality — they are leading us in the 21st century.”

That point was brought home by Lorraine Hammond, HR director for Markem-Imaje in the U.S. and Canada and a recent Keene transplant from Manchester, England. She pointed out that when the business that would become Markem-Imaje began back in the early 1900s, it was just a small shoe-marking company. Since then, it has grown into a worldwide leader of marking and coding. The reason the company could do that, she explained, was because it held firm to its core principals.

“Innovation, entrepreneurial spirit,” she told the group, listing a few of those values. “We encourage employees to think outside of the box, to take calculated risks and to take ownership of the business and its success.”

However, she said, it’s becoming increasingly difficult to recruit potential employees who possess those values. That’s one of the reasons Markem has supported Trendsetters as a sponsor — because the company wants to continue to “encourage others to think differently, to step up, but also to recognize those in the community who endeavor to make Keene and the surrounding area a better place to live,” she said.

This, she continued, will encourage even more innovative national employers to come to the area, thus creating an engaged and innovative pool of candidates to pull from.

Kim Mooney, president of Franklin Pierce University, pointed out that universities struggle with the same problem of attracting students from a shrinking pool of high school graduates and an increasingly competitive higher-education market. She said it’s not out of the realm of possibility for even a smaller college or university like Franklin Pierce to spend roughly $3,000 per student, per year, in recruitment. When looking to recruit a class of 500, that easily can cost upward of $1.5 million per year.

Recognizing their common dilemma, Mooney said she has made a concerted effort since taking her position in 2016 to create more partnerships between Franklin Pierce students and local businesses.

“These are students who have chosen to move to the Monadnock Region and attend college,” she said. “They are interning at our offices, shopping at our stores, volunteering at our nonprofits and significantly contributing to our economy.

“So, we are trying to think past a four-year undergraduate timeline. We all win if the students we recruit become for you, our partners, the volunteers, the interns ... and ultimately the next generation of prepared employees in this region.”

As for the night’s honorees, each was drawn to this region, whether for its natural beauty, opportunity or by chance, and has chosen to start a business or rise through a business’ ranks and build a life here.

But more than that, honorees like Travis Kumph, who is the philanthropy coordinator at Monadnock Community Hospital in Peterborough, and Elana Baron, an attorney with Bragdon & Kossayda in Keene, have chosen to help those who can’t always help themselves.

Other honorees, like Alona Florenz — a local farmer and vice president of corporate development at C&S Wholesale Grocers — and Keene City Councilor Maggie Rice, who is also development officer at Kurn Hattin Homes for Children; and Jahdiel Torres-Caba, who works for a community organizing group in Concord, see the larger benefit of living in a strong, supportive community.

For U.S. Marine Reserve veteran Andrew Weglinski, a project engineer at The MacMillin Company; Dr. Lance Miller, owner of Keene Orthodontic Specialists; and Kendra Carter, retail operations coordinator for Savings Bank of Walpole, their jobs in the community are more than just a place to clock in and out of each day.

“I want responsibility and potential for growth,” said Carter, the retail operations coordinator for Savings Bank of Walpole, who has assisted with the Monadnock United Way, Southwestern Community Services and Granite State Independent Living. “And maybe more than anything, I want to know that I am serving a purpose.”

Katie Day, communications and marketing manager at MoCo Arts, and Esther Ruth Holland Rhoades, the musical and artistic director of the Grand Monadnock Youth Choirs, haven’t forgotten the importance of a thriving arts culture in a community.

Danya Landis, co-founder of Machina Arts, sees the region as a place to stretch, make mistakes, grow and be encouraged as young entrepreneurs.

She offered words of wisdom to other business owners starting out.

“I think part of owning a business is being courageous,” she said. “If you keep going, even if you feel like maybe you shouldn’t, then at some point, it sticks. At some point, it works.”

If you ask Carl Soderberg, being an entrepreneur is not about getting rich quick. It’s not g…