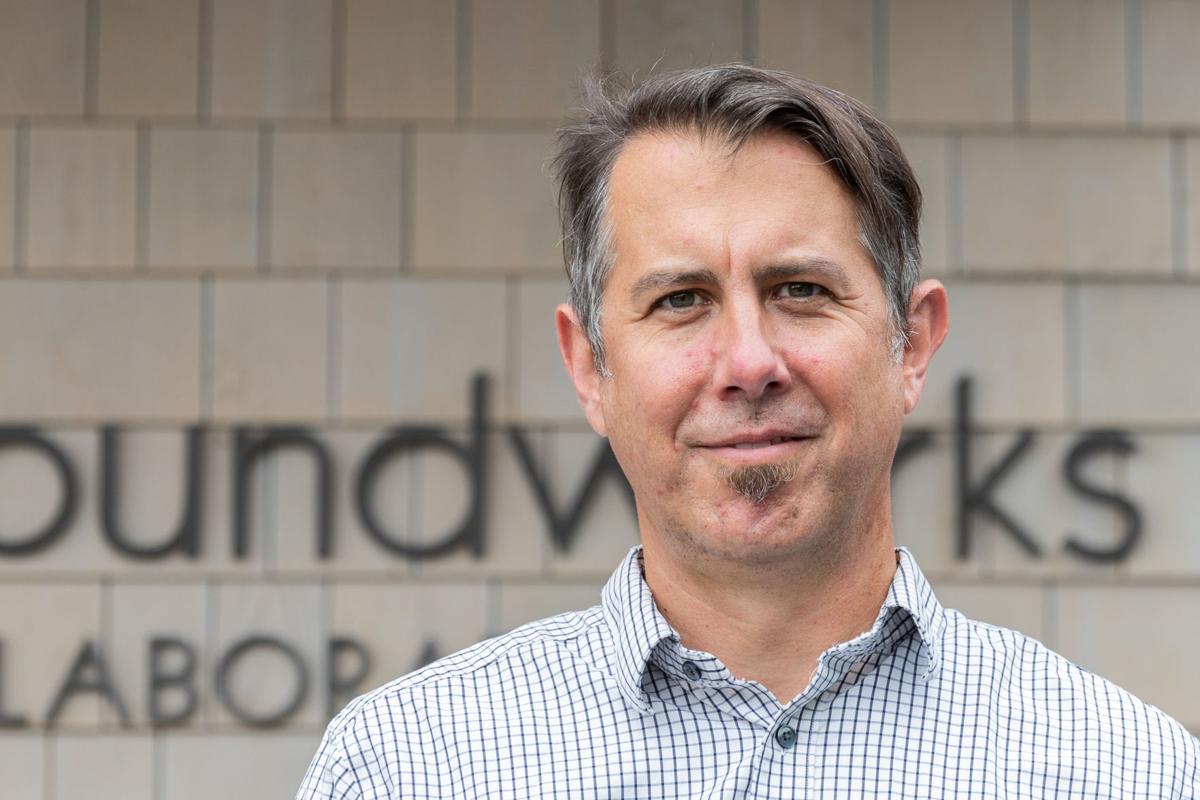 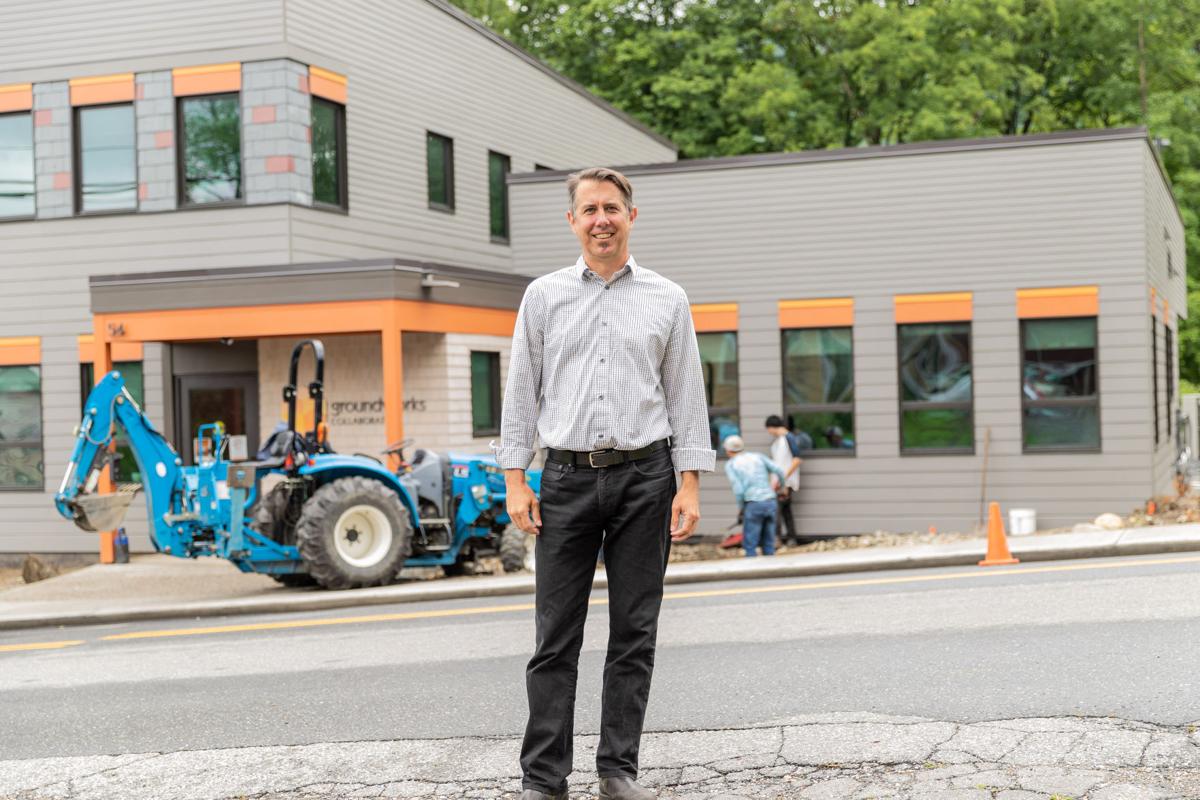 Josh Davis, executive director of Groundworks Collaborative in Brattleboro, stands in front of the new shelter and drop-in center on South Main Street. “It’s amazing how we were all able to work together,” he says of the many people whose efforts brought the project to fruition.

Josh Davis, executive director of Groundworks Collaborative in Brattleboro, stands in front of the new shelter and drop-in center on South Main Street. “It’s amazing how we were all able to work together,” he says of the many people whose efforts brought the project to fruition.

BRATTLEBORO — Josh Davis sits in his office on the second floor of the newly completed Groundworks Collaborative drop-in center and homeless shelter located on the steep slope of South Main Street just off downtown. He’s talking about the new structure and how it fits into his wish to eventually provide adequate shelter for everyone in town who needs it.

“To get from where we are now to our goal is a long road,” says the 46-year-old executive director. “But I believe in our organization’s ability to solve complex problems like homelessness.”

Even though it just opened July 1, the facility — built at a cost of $4 million — is already busy on this day, with about a dozen people in its lobby and an equal number outside in back. The finishing touches are being put into place, including landscaping and decorative rockwork. The robust central air-conditioning units on the side of the building are humming away on this sultry summer day, keeping the place cool and comfortable for clients who are doing laundry, showering or having meals.

In September, the facility will open for overnight occupancy for up to 34 people — just in time, Davis says, to take up the slack caused by the state of Vermont throttling back on COVID-related temporary emergency measures that placed people experiencing homelessness in local motels.

For Davis, creating solutions for those who seek shelter is a crusade.

“I receive my reward by creating space for people,” he says, “carving out places for them to live.”

He says addressing homelessness in any community requires consistency, commitment and teamwork.

“I have said for years that solving homelessness is not rocket science. It is not a complex enigma,” Davis wrote in an op-ed in the Brattleboro Reformer on April 28, 2020. It was shortly after COVID had hit, and he praised the state of Vermont for its quick action to provide housing for residents statewide who found themselves without it.

“We know how to solve homelessness,” his essay continued. “Homelessness is solved when we have ample housing stock coupled with rental subsidies and supportive services when needed. What has been lacking is the will and commitment to bring sufficient resources to bear to move from a position of mitigating homelessness to functionally ending it.”

Davis explains that there is a misperception by residents in any community that homelessness is the fault of the person experiencing it.

“But if you peel back the layers, it’s incredibly complex. It’s generational poverty, it’s mental health, it’s medical care or substance abuse. If you have just a quick interaction with someone, you might think, ‘Well, if they’re in that state, they must have caused it.’ That’s not the case.”

He also says it’s a misperception that if you provide services, others from afar will hear about it and come, resulting in higher numbers of those needing shelter and requiring other aid.

“People are skeptical of folks coming into town who don’t have means,” he says, citing that in the old days many villages required new residents to show evidence they had either money or skills that would lead to employment.

“But the reality is that the overwhelming majority of the homeless here are from here; they are from families here or they have jobs here. There’s a reason that they’re here.”

A further complication to providing services for those experiencing homelessness in any community is the “not-in-my-backyard” mentality, he says, where residents agree with the concept of helping others, as long as the shelters “aren’t in my neighborhood.” Groundworks’ new shelter didn’t encounter that issue because it is next door to a long-time drop-in center that Davis had hoped could have been renovated into administrative offices. Unfortunately, that building, built in 1780, was termite-ridden and structurally unsound. It will be razed, and plans call for a new building there that will house case managers.

Exacerbating the current homelessness situation locally, Davis says, is an extremely vibrant real estate market in the Brattleboro area, which has raised prices considerably for single-family homes and apartments, locking out people of lower income.

“There’s very little housing available,” he says, as a national trend continues of people leaving big cities and migrating to smaller towns, a movement that gained steam with the onset of the pandemic.

Davis was born in Atlanta and lived there until he was 14, when his family moved to Lubbock, Texas, when his father, Ken Davis, took a job as a professor at Texas Tech University. He graduated from high school in Lubbock and enrolled at Texas Tech, but stayed only part of the first semester. For the next four years, he worked a series of jobs, including deli cook and land surveyor. He also remodeled kitchens and bathrooms for a company in Atlanta, where his mother, Georgia Davis, had returned after his parents’ divorce.

He thought perhaps the construction job would evolve into a lifelong career.

“I discovered I wasn’t very good at construction; I’m not very handy,” he admits.

He re-enrolled at Texas Tech, eventually earning a bachelor’s degree in general studies with specialties in art history, Italian and the humanities. During that time, he spent a semester abroad, studying in Florence, Italy, an experience that ignited a yearning for international travel.

After graduation, he joined the Peace Corps and was assigned to teach school in the small settlement of Uis, Namibia, the site of a huge tin-mining operation. It was in Namibia where he met his future wife, Tara, another Peace Corps volunteer who was working in the nearby town of Fransfontein.

Davis relates an anecdote from his time there that taught him a lesson about housing and the importance of first understanding the context of local culture and customs.

“An international aid agency came in and built housing units for elderly people. Nobody moved into them, it turned out, because they hadn’t realized that in Namibia, old people never live alone; they live with families. So, they remained vacant.”

The couple left the Peace Corps in 2005 and spent three years “adventuring,” as he describes it, living in Central America, Hawaii and Japan, where he and Tara taught English in a private school in the city of Oita, on the island of Kyushu. They were married in 2007.

The following year, he enrolled at the School for International Training in Brattleboro, with the intention of burnishing his credentials for future work in the field of international aid. He earned a master’s degree in sustainable development in 2010.

“This was the proverbial, ‘We’ll stay here two years and go,’ and then my wife got pregnant,” he says, “Our first child.”

That anchored the couple, and Davis got a job working with Post Oil Solutions, focusing on the Brattleboro organization’s work on food-security issues. This introduced him to a cadre of people in town, many of them volunteers, who were addressing the issues of food and shelter for area residents.

He went from there to become a staff member at Meeting Waters YMCA in Bellows Falls, and also volunteered for the evening shift at Morningside Shelter, a precursor to Groundworks Collaborative. It is named Morningside because it is located — and still operating as a shelter under the aegis of Groundworks — next to Morningside Cemetery on South Main. Parenthetically, Davis notes, that cemetery is also where Nobel-prize-winning author Saul Bellow is buried in a family plot.

“I fell in love with the people there at Morningside and their mission,” he says.

In 2012, he became Morningside’s director.

At that time, Davis explains, there were a handful of organizations in town helping people in need. First among them was the Brattleboro Area Drop-In Center, founded in 1997 by Melinda Bussino, a pioneer advocate for the homeless, hungry and poor in Vermont for three decades. She died of a heart attack in 2012, the year Davis began directing Morningside. Her center was in the building now next to Groundworks that is slated to be demolished.

The United Way of Windham County pushed for a consolidation of Morningside and the Drop-In Center, a process that took three years and in May 2015, resulted in the formation of Groundworks Collaborative, with Davis as its executive director.

Funding for Groundworks’ new shelter and drop-in center came from a combination of sources — 40 percent private donations, 25 percent from New Market Tax Credits facilitated by the Brattleboro Development Credit Corp., 20 percent from the state of Vermont and the remainder from the town of Brattleboro and private grants.

Although many community members pitched in to see the new shelter become a reality, Davis says it could not have been done without the support of Town Manager Peter Elwell and selectboard members Liz McLoughlin, Daniel Quipp and Tim Wessel. Also assisting in the project was Steve Gordon, president and CEO of Brattleboro Memorial Hospital, and the staff at the Turning Point of Windham County peer-to-peer rehabilitation center in Brattleboro.

Davis says this accomplishment — the building — is a milestone in Brattleboro’s decades-long effort to help its residents most in need.

“You know, the economy doesn’t benefit everybody,” he says.

And yet, he remains optimistic.

“It’s amazing how we were all able to work together,” Davis says. “We can end homelessness in Brattleboro.”

At a glance: Josh Davis