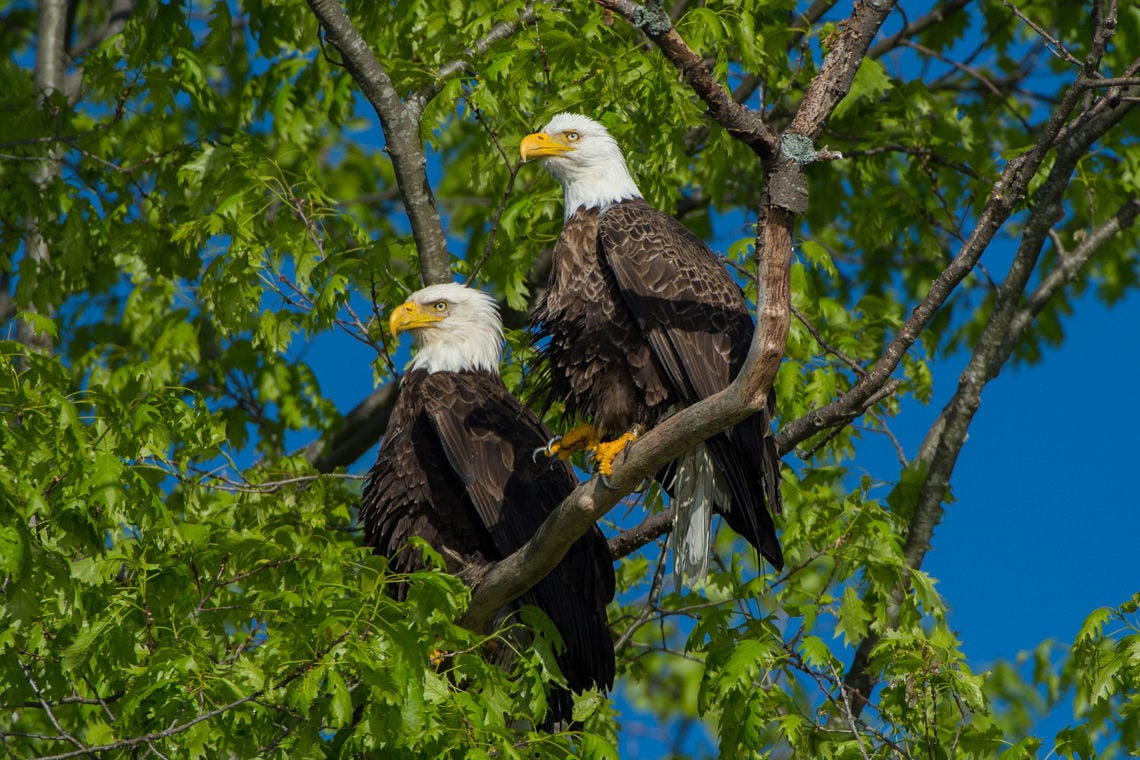 This photo of the Nubanusit Lake breeding pair was taken in May 2014. Gold W84 is at right, the gold band visible on his leg. 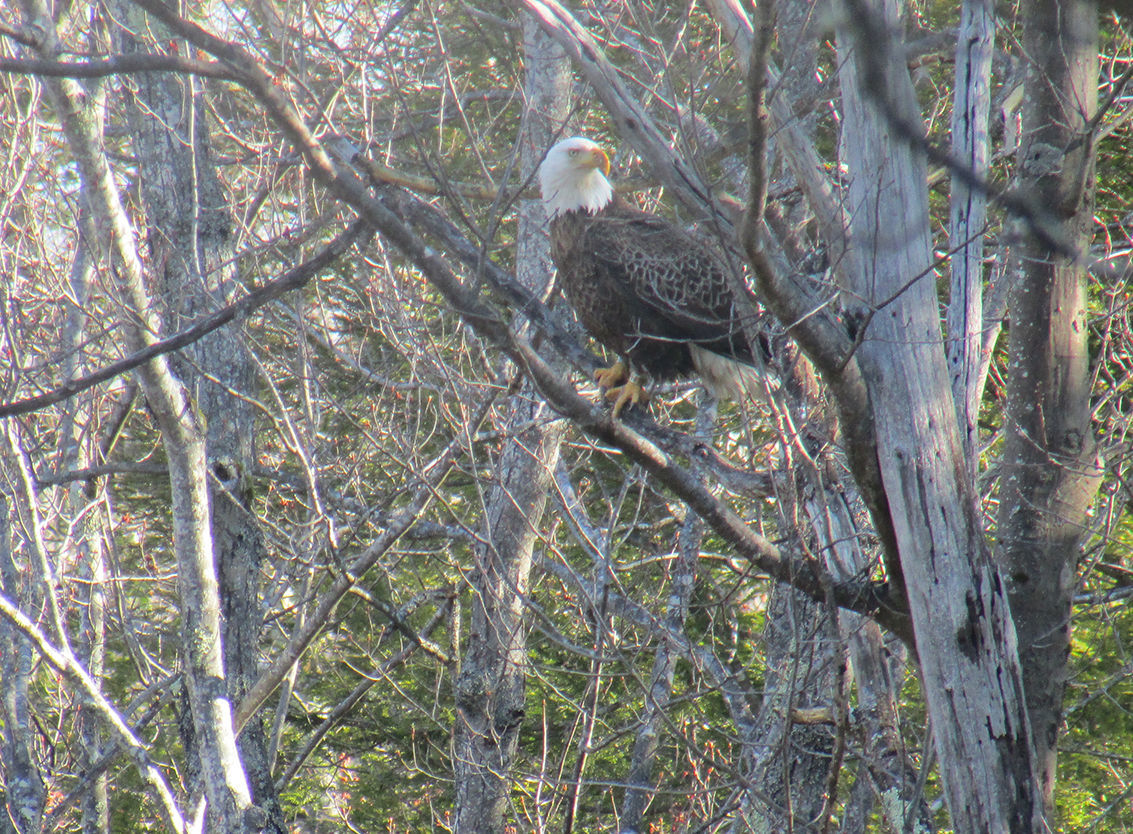 Cameron Fisk of Harrisville photographed Gold W84 on May 2 after spotting the eagle not far from Nubanusit Lake. (Cameron Fisk)

This photo of the Nubanusit Lake breeding pair was taken in May 2014. Gold W84 is at right, the gold band visible on his leg.

Cameron Fisk of Harrisville photographed Gold W84 on May 2 after spotting the eagle not far from Nubanusit Lake. (Cameron Fisk)

Most 23-year-olds are considered young and vital, perhaps in the prime of their lives.

A Harrisville man recently spotted the bird not far from Nubanusit Lake, where Gold W84 has lived since at least 2007, and submitted a photo of the eagle to the New Hampshire Audubon, which monitors and manages the state’s eagle population.

Older eagles are “definitely rare,” said Chris Martin, a senior biologist with the Concord-based organization, which conducts the state’s bald eagle project under contract with the N.H. Fish and Game Department. Most eagles, Martin said, either die in their first year of life, or live to be about 10 to 15.

In the right environment, though, eagles can live longer. The oldest documented bald eagle in the U.S. was at least 38 when he died in 2015 in New York, according to the U.S. Fish and Wildlife Service.

“That tells you a little about the quality of the habitat there, that eagles can live a long, healthy life in that spot,” Martin said in a phone interview Monday. “... They’re apparently not running into too many environmental risks at Nubanusit Lake and the surrounding area.”

It is largely coincidental that the Nubanusit Lake area has been home to the two oldest eagles reported in the state, Martin added, but the environment on the border of Cheshire and Hillsborough counties does have some advantages. For one thing, Martin said, the people who live nearby are highly interested in the local pair of eagles. When one member of an eagle breeding pair dies, the surviving partner remains in the same territory and a new mate moves in to join the survivor, as a new female did with Gold W84 after his previous mate died.

“I’ve had a lot of success working with various folks down there who are interested in monitoring their nesting pair of eagles,” he said. “And that’s helped to some degree in our knowledge of who those eagles are.”

Cameron Fisk, the Harrisville man who snapped a photo of Gold W84 on the morning of May 2, said he and his wife, Courtney, spotted Gold W84 earlier in the same week before taking the photo. Before that, they hadn’t seen the eagle since 2013.

“I am an amateur photographer at best, but I do love to be able to show my kids the wildlife around us,” Fisk said in an email Tuesday. “We live in a beautiful town.”

Fisk didn’t notice a band on the eagle’s leg until the day after he took the photo, at which point he sent it to N.H. Audubon. The picture was clear enough for Martin to identify the eagle as Gold W84, which is shorthand for the color and code on the band itself.

The code on the leg band allows experts like Martin to document the history of individual eagles. Gold W84 was born in the spring of 1997 on Little Quabbin Island in the Quabbin Reservoir in Ware, Mass.

“And it was 10 years later before I think anybody saw that bird again and read that leg band on it, which is not an easy thing to do on a wild bird,” Martin said. Gold W84 was first documented at Nubanusit Lake in 2007, though he may have arrived a few years earlier and gone unreported, Martin added.

It is likely that there is or has been an eagle in New Hampshire older than 23, Martin added, but Gold W84 is the oldest one documented.

“There are a number of banded eagles out there that we don’t get a look at every year. And until someone provides that information, we don’t have a record of that one currently,” he said. “... All we can work with is what we know in terms of facts that come in the door. And this is the oldest we have on record right now.”

In order to track and manage the state’s bald eagle population, N.H. Audubon relies on a network of volunteers and amateur photographers like Fisk. This sort of engagement and education lies at the heart of the organization’s mission, Martin added.

“There’s a lot of people who understand where their local eagles are nesting and watch that site and talk to their neighbors about what’s going on,” he said. “And that gets everybody involved, and that’s a good thing.”

During the past 30 years, N.H. Audubon and the state fish and game department have used this sort of involvement toward achieving the state’s goal of restoring its eagle population. In 1990, there was only one documented bald eagle in the state, Martin said. Last year, there were 72 breeding pairs, a figure that has been increasing by about five pairs each year, and doubling every five or six years. The bald eagle is no longer on the state’s threatened or endangered list, but it remains a legally protected species in New Hampshire.

The restoration of the state’s eagle population has allowed officials to focus on creating good habitats for eagle pairs, which always build their nest near a body of water, and claim about 20 square miles of territory.

“Our goals now are mostly to promote eagles nesting in locations where they’re not disturbed and are able to go about their business and be eagles and raise young every year,” Martin said. “And we work to protect shorelines, and we work to minimize the amount of toxins in the environment, in fish, for example.”

The eagle breeding season runs from February through July annually, meaning that the raptors are visible and active at this time of year, Martin said. And as N.H. Audubon works to determine where the new nesting sites in the state are this year, the group relies on public notifications.

“The action I’d love for folks to take in the Monadnock Region is if you are aware of a pair of adult — that’s the one with the white heads and tails — bald eagles on your favorite water body, or if you’re aware of them constructing a nest, it’s always good to check with New Hampshire Audubon or Fish and Game to see if it’s a spot we have in our inventory of nesting eagles,” Martin said. “They nest in the same places year after year, so once they’re there, they’re usually there for many years. But every year, there’s a new pair somewhere.”