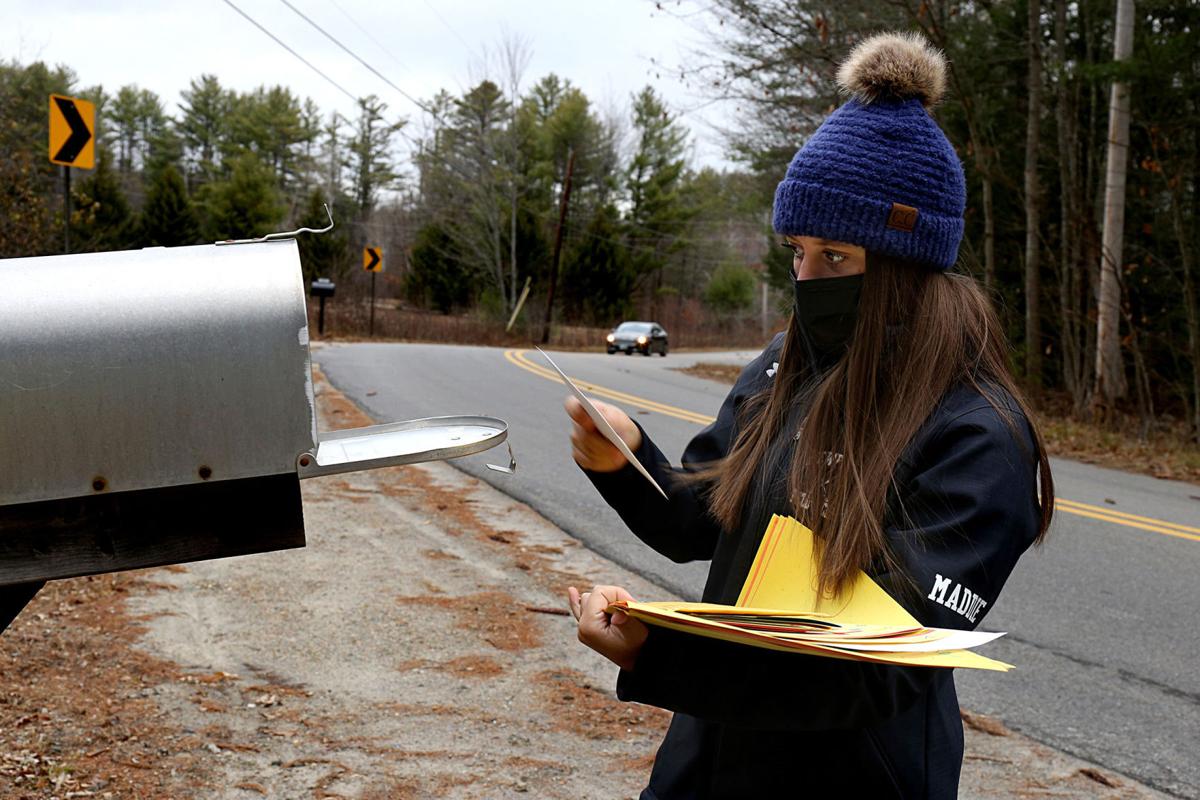 Photographed on Monday, Maddie Miller, a 12th-grader at Newport Middle High School, has been collecting cards and artwork for residents at Woodlawn Care Center in Newport. 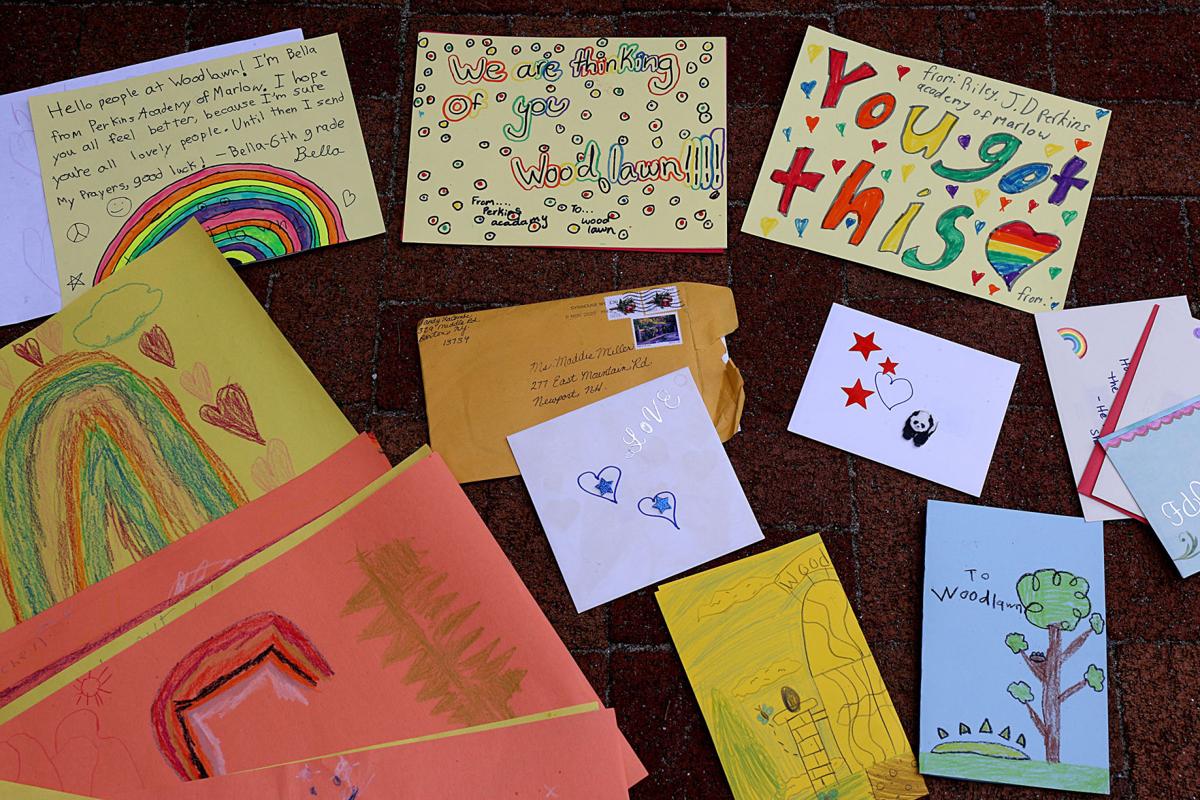 Over the past several weeks, Maddie Miller has been receiving about 20 cards and artwork of encouragement daily — including this group from 6th-graders at Perkins Academy in Marlow — that she passes along to residents at Woodlawn Care Center in Newport.

Photographed on Monday, Maddie Miller, a 12th-grader at Newport Middle High School, has been collecting cards and artwork for residents at Woodlawn Care Center in Newport.

Over the past several weeks, Maddie Miller has been receiving about 20 cards and artwork of encouragement daily — including this group from 6th-graders at Perkins Academy in Marlow — that she passes along to residents at Woodlawn Care Center in Newport.

The senior at Newport High spent her summer as an activities aide with the residents of the Newport nursing home. She originally saw the job mainly as a way to get around visitor limitations to see her grandmother, Kay. But it turned into days spent playing bingo, making crafts and taking walks while forming relationships with the residents.

“I went into it thinking I was just going to spend time with my grandma, and I ended up making pretty strong connections with the residents,” she said.

Miller — the co-leading scorer on this fall’s Newport field hockey team — decided to put out a Facebook call on Nov. 7 asking community members for letters, drawings or small paper items that can be sent in a letter for her to deliver. She also asked the Newport School District to assist in her effort.

As of Monday, three residents at Woodlawn had died of COVID-19, and the active cases included 33 residents, 19 employees and one contractor at the Newport nursing home. Three Woodlawn residents were hospitalized, though nine residents and four employees had recovered.

Miller had been helping out at Woodlawn on the weekends until the outbreak began. Now, she’s looking for ways to provide assistance from the outside.

“It’s hard not being able to see all the residents,” Miller said. “I’ve gotten a lot of letters from kids at the high school and elementary school. A lot of the teachers at the elementary school are doing morning activities with the kids and writing letters.”

The idea to send notes and drawings of support dates to May when students from the Newport Montessori School sent in letters to the residents. Miller’s job was to hand them out and read to those who couldn’t, and she recalled the residents’ joy in hearing the words of support. They soon after sent thank-you letters.

Chris Martin, the nursing home’s administrator, said some of his best workers are family members of those who live in the home. He reached out to Miller because he knew she would be a good fit, and the opportunity to see her grandmother wasn’t something she’d turn down.

“Being isolated and having to deal with maybe having COVID, which for many of our residents have a high mortality rate, can leave a heavy burden,” Martin said. “Knowing that the community is thinking of them and sharing letters helps. I really think it’s essential for mental health and knowing that people care.”

Miller’s initiative has extended beyond classrooms of the Newport School District, including a batch from a group of 6th-graders at Perkins Academy in Marlow.

Sandra Cherry at Universal Physical Therapy has put up a station in her waiting room where visitors can leave a note that Cherry can pass along. And Cinnamon Street, a child care center in Newport, has had its kids draw pictures for the residents at Woodlawn.

“The residents, because I started working there in May, they never knew what I actually looked like,” Miller said. “For most of the summer, I had a mask and a [face] shield on. It was crazy; I would go in, and people would ask who I was.”

She’s currently taking three classes, which include an emergency medical technician class run through the school. Once it is completed, she can take her boarding exam in the spring and have her EMT license.

“She was relentless in her pursuit [to get letters for Woodlawn],” Newport High Principal Shannon Martin said. “She thought full-district; she asked for middle school and elementary involvement. I don’t always get kids who think like that districtwide involvement.”

Miller is the daughter of Tigers athletic director Jeff Miller, and her father has had plenty to be proud of about his daughter’s athletic skills.

Maddie Miller set the Newport field hockey program’s single-season scoring record with 14 goals a year ago. She averaged 5.4 points per game last winter in basketball, and this fall she netted 10 goals in field hockey during a shortened season.

“Of the 10 seniors I had this year, she’s grown the most as a player and a person,” Newport field hockey coach Steve Christensen said. “If she’s not the most unselfish player I’ve ever coached, she’s definitely top three. She never cared who scored or who got the assist, but the fact the team was winning. The team was first; Maddie Miller was second.”

Miller said she’ll continue collecting letters and cards to deliver to Woodlawn, and for her future she plans to become a pediatrician. Tufts and Boston College are top of her list for pre-med.

“I’ve always wanted to be a pediatrician,” Miller said. “But this has definitely sparked the need for me, because I just feel like so many people left the medical field when the pandemic started. It’s not easy to work during a pandemic, but I saw the need for health care workers and that’s something that’s super-important to me.

“I’m in high school; there’s only so much I can do right now. But I’m trying to help in the ways that I can.”

This article is being shared by partners in The Granite State News Collaborative. For more information, visit collaborativenh.org.