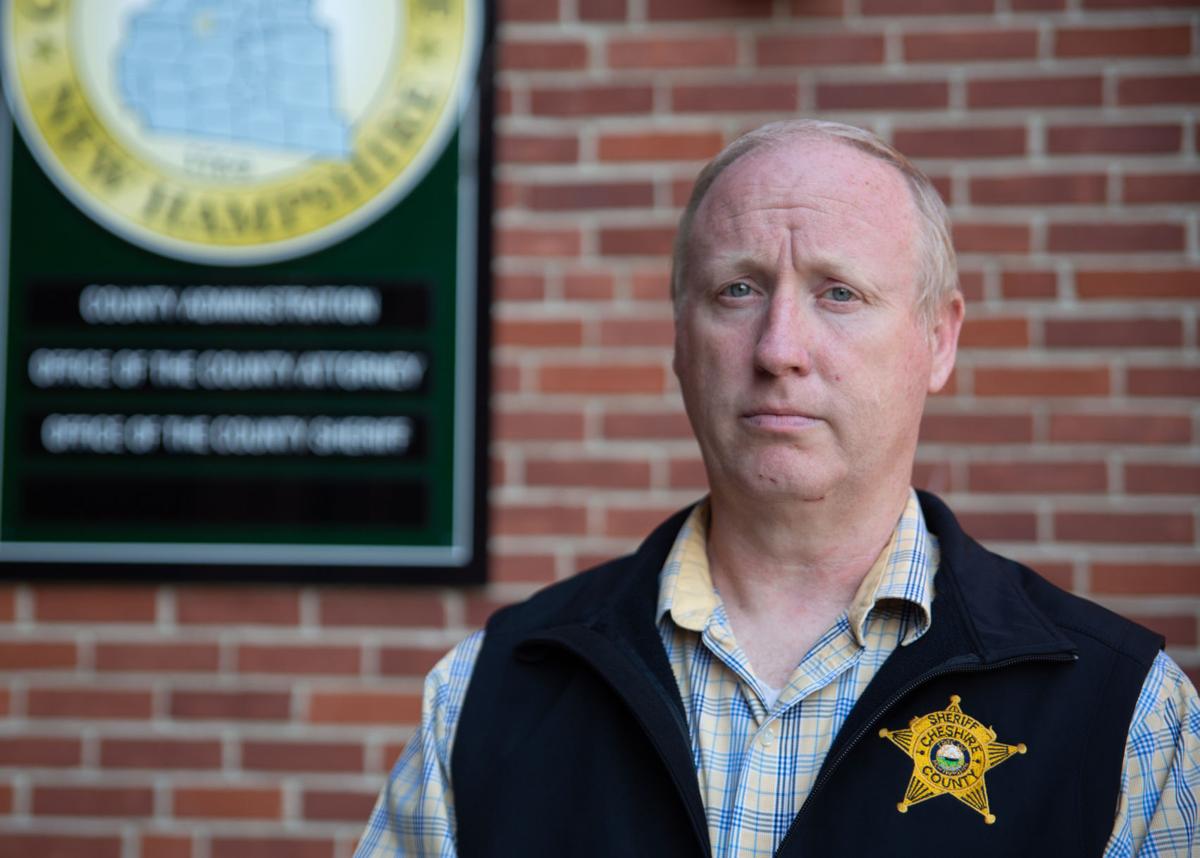 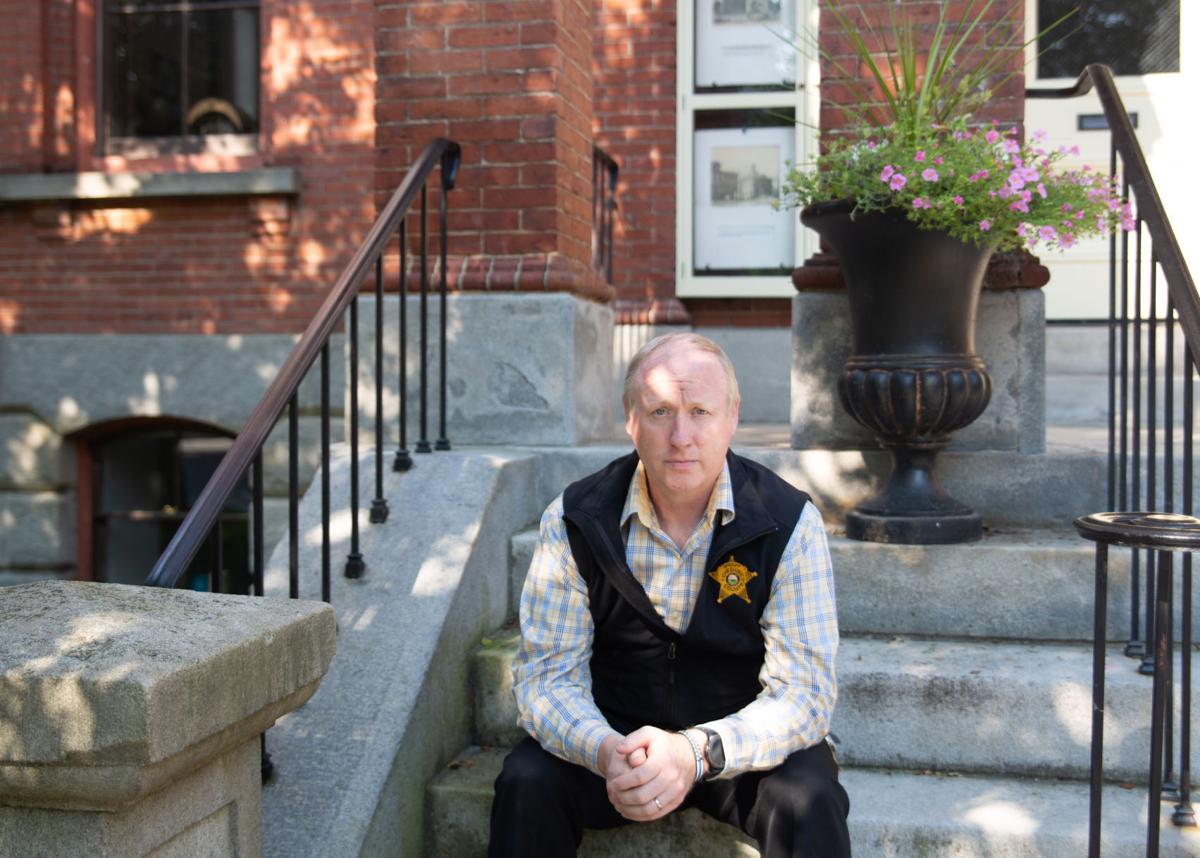 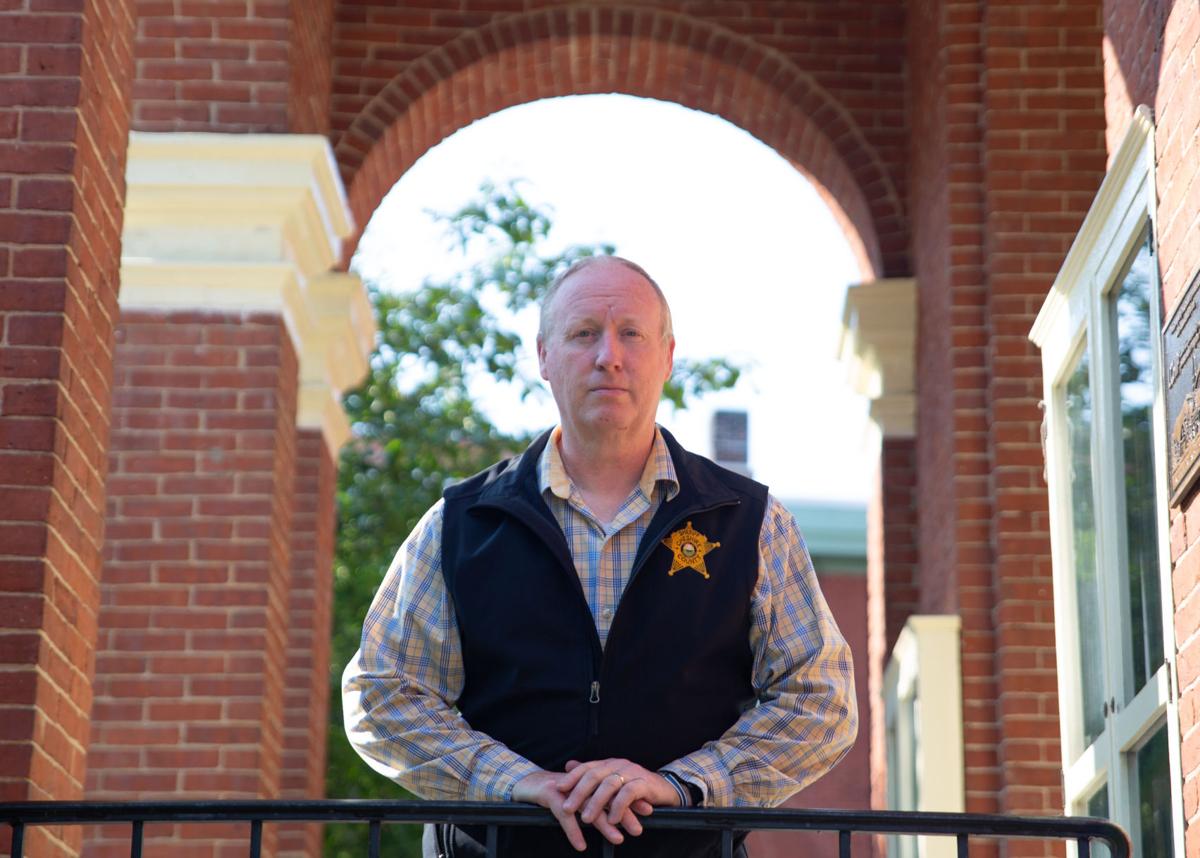 “You build trust," said Todd Faulkner, chief deputy of the Cheshire County Sheriff’s Office, reflecting on his many years with the Hinsdale Police Department. "It may not always be friendships, but I found that if you treat everyone with respect — even if you’re dealing with them on the worst days of their lives — that respect will be returned.” Faulkner is shown here outside the Cheshire County Superior Court in downtown Keene Thursday.

“You build trust," said Todd Faulkner, chief deputy of the Cheshire County Sheriff’s Office, reflecting on his many years with the Hinsdale Police Department. "It may not always be friendships, but I found that if you treat everyone with respect — even if you’re dealing with them on the worst days of their lives — that respect will be returned.” Faulkner is shown here outside the Cheshire County Superior Court in downtown Keene Thursday.

Todd Faulkner has been a very busy man, and it shows. His résumé is 10 pages long — all small print — and describes in detail the diverse expertise he’s acquired in more than two decades as a law enforcement officer.

He’s an internationally-recognized expert and instructor on police use of force, with an emphasis on the protocols of how and when to use Tasers. He’s a leader in the field of investigating child sexual abuse and tracking down offenders using computer forensics. He has done extensive work in cyber-crime, domestic violence, community policing and training officers how to handle potentially dangerous situations using “de-escalation” techniques that may prevent having to use deadly force.

“All police officers have specialties that they develop,” Faulkner says. The 49-year-old is the newly-appointed chief deputy of the Cheshire County Sheriff’s Office, after spending 22 years with the Hinsdale Police Department, the last eight of them as chief.

Faulkner, a welcoming and friendly presence, is hardly boastful about his accomplishments; in fact, it takes some cajoling to get him to talk about all of them.

Despite a long police career where he has seen quantum leaps in technology, forensics and training, Faulkner says there are two constants — a deep understanding of human behavior and the community in which you work.

His long experience in Hinsdale taught him that.

“In all my years there, I saw the good, the bad and the ugly. Everyone knew me. I knew family histories. I knew their stories; I knew how people were related to one another.

“You build trust. It may not always be friendships, but I found that if you treat everyone with respect — even if you’re dealing with them on the worst days of their lives — that respect will be returned.”

Faulkner has always had a deep familiarity with this part of New Hampshire and Vermont, having been born in Brattleboro and raised just south of there in Vernon, where his father, Gordon Faulkner, worked at the Vermont Yankee nuclear power plant. Gordon and Todd’s mother, Charron Faulkner, operated a farm.

When he was 14, he had the opportunity to ride along on patrol with Vernon’s then-Police Chief Dennis Johnson, introducing him to law enforcement. During his teen years, family friend Brenda Merritt, an emergency medical technician in Vernon, encouraged him to begin training in her field.

In 1989, his senior year at Brattleboro Union High School, Faulkner joined Rescue Inc. in Brattleboro as an EMT and was associated with it until 2009. While working with the ambulance company, he estimates he assisted in the emergency treatment of more than 4,000 patients, during a time when he was also working other jobs.

After his high-school graduation, Faulkner earned certification with the Vermont Police Academy and underwent field training with the Brattleboro Police Department. After that, he enrolled at Southern Maine Technical College — now Southern Maine Community College — in South Portland, graduating with an associate’s degree in law enforcement technology.

He then worked briefly for a land-surveying company, and in 1992 became an armed tactical security officer at Vermont Yankee, where he stayed until 1997 when he was hired as an officer with the Hinsdale Police Department.

“When I joined Hinsdale, my thinking was that it would be a stepping stone to another job,” he says. “But I learned quickly that there was such a variety of work that I was never going to be bored. Everything from homicides to domestics to burglaries to traffic stops. I was busy, extremely busy, and I looked forward to 2 a.m., when things quieted down, so I could get to my paperwork.”

With a population of 4,000 scattered over 22 square miles, Faulkner would sometimes find he was the only officer on duty. He made it his mission to carefully study the community and its residents.

“It’s a tough town,” he says. “You find that everything goes through you. Sometimes during a shift I’d have 30 calls and make five arrests.”

Per capita, Hinsdale officers handled more calls than individual police officers in either Keene or Brattleboro, he says.

Dispatching for the Hinsdale Police Department was done through the Cheshire County Sheriff’s Office, and Chesterfield police backed up Hinsdale when more officers were needed.

“All of us trained together; we had family days together,” Faulkner says of the coordination between the two departments. “We knew each other very well.”

He also learned during his years in Hinsdale that there is no substitute for the most basic work required of an investigator — interviewing people.

“I have to tell younger officers the same thing — get off your butts and go knock on doors,” he says. “The best information is from the community. People pay attention to their town, to their block, to their neighbors.”

Faulkner developed an interest in how to properly train officers for potentially dangerous situations while on patrol.

“It’s a ‘when-then’ training — when something happens, then what do you do? It’s scenario-based; we make the officer respond.”

This led him to become versed in techniques to defuse and de-escalate confrontations.

It also led him to become an expert on the use of Tasers. Eventually, he assisted more than 50 police agencies throughout Vermont, New Hampshire and Maine with developing and implementing Taser guidelines and training. Using his expertise as an EMT, he also educated regional emergency medical services personnel on the proper treatment of patients who had been Tasered.

Eventually, this expertise led to him training law enforcement agencies throughout the United States, Canada and Europe on the use of Tasers, as well as de-escalation techniques. He conducted these training sessions for 15 years, until he grew tired of the constant travel involved.

At the same time as he was developing his expertise in Taser use, he became involved in child abuse investigations, through an association with Chesterfield police prosecutor John Dudek, who was working in that field.

In 2006, he was promoted to lieutenant in the Hinsdale department, investigating felonies, child sexual crimes and computer crimes, as well as serving as a liaison to the Cheshire County Attorney’s Office.

He also became qualified as a forensic interviewer of children in sexual abuse cases, and tracking down offenders who used computers in their crimes.

“I’d always had an interest in computers, even when I was young, I learned DOS programming and how they worked,” he says. “I had an affinity for technology.”

In 2010, Faulkner, still employed with Hinsdale, became a special investigator with the N.H. Internet Crimes Against Children Task Force, which had been created in 1998 to investigate cases of child sexual exploitation involving the use of technology. Such crimes include child trafficking, online solicitation of minors and the possession, manufacturing and distribution of child sexual abuse images.

“There is an aspect of hear no evil, see no evil,” Faulkner says, when it comes to sex crimes against children and those who commit them. “You don’t want to admit that they’re in your community, but all communities have them.”

In 2018, while still chief in Hinsdale, he became the second in command of the task force. He retired from Hinsdale in November 2019, and continued working for the task force in a joint agreement where he also was hired as a lieutenant with the Cheshire County Sheriff’s Office, heading up its new forensics laboratory. Funded by state money allocated to the task force, the laboratory is located on the lower level of the department.

In addition to his duties with the sheriff’s office, Faulkner also works with the Monadnock Region Child Advocacy Center, one of nine such organizations around the state that provide safe, child-friendly locations for interviewing victims of sex crimes.

“These cases involve a lot of digging. It’s like putting together a puzzle; a few pieces are there but you have to get all the pieces to fit together to find out what really happened,” he says.

He admits that a steady diet of investigating such heinous crimes has had an effect on him.

“It’s unavoidable. I’m a different person from when I started. You look at humanity in a different light. I’ll be walking down the street, and I notice certain behaviors.”

And it’s a difficult job to simply drop at the end of a shift, he says.

“I’d be lying to you if I said I didn’t go home thinking about a case.”

Eventually, though, “you have to disassociate yourself” from the investigations, and find time for friends, recreation and hobbies, he says. He spends much of his free time working on his tractor, or with his chainsaw and chipper, clearing brush, at his home in Cheshire County. Also, every year he embarks with buddies on a 48-mile, four-day canoe and camping trek on the West Branch of the Penobscot River in Maine near the Canadian border.

Invariably, though, his mind circles back to the cases.

“My passion is for investigation,” he says.

At a glance: Todd Faulkner