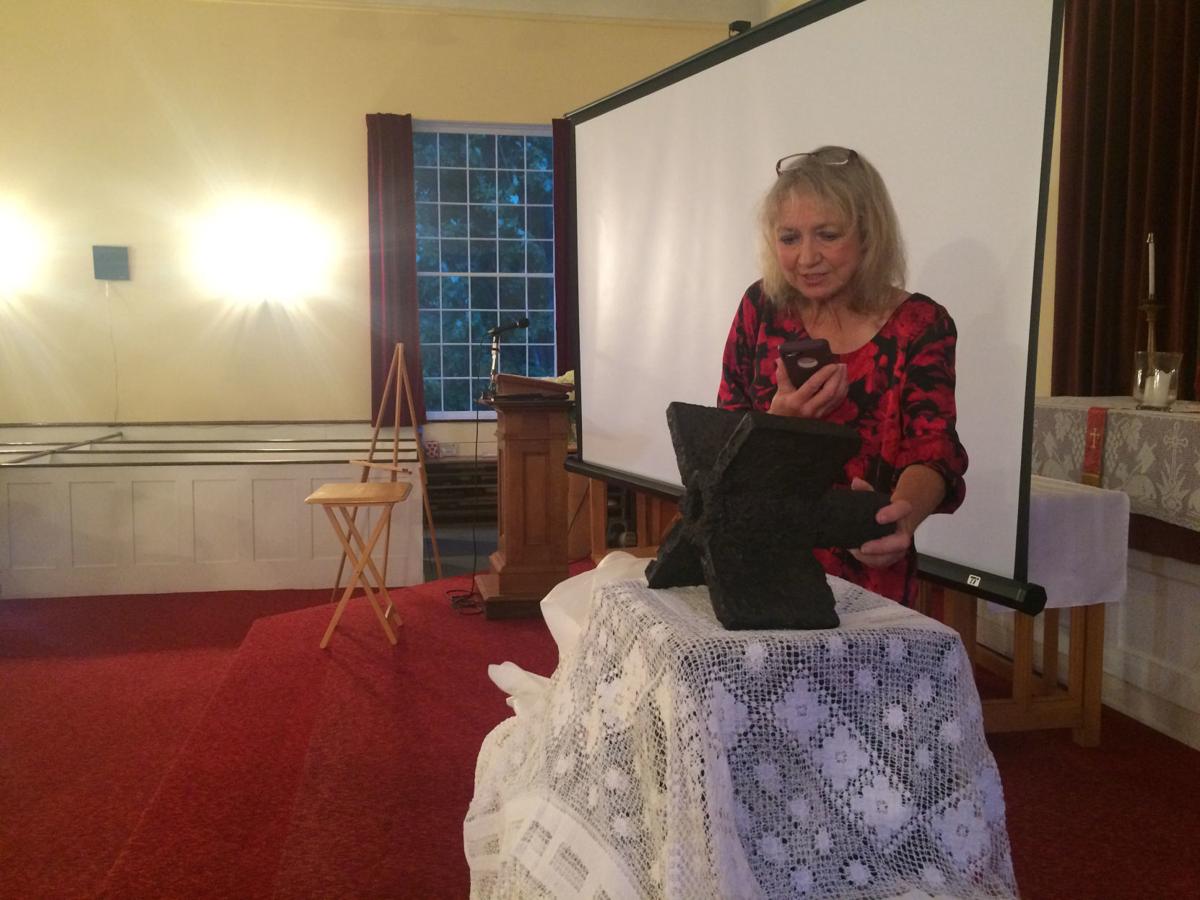 After a presentation at the Asbury United Methodist Church in Chesterfield Thursday night, diver Annette Spaulding of Rockingham, Vt., speaks to steamboat enthusiast Timothy Lynch, whose nick-of-time email made for a dramatic end to Spaulding’s talk. 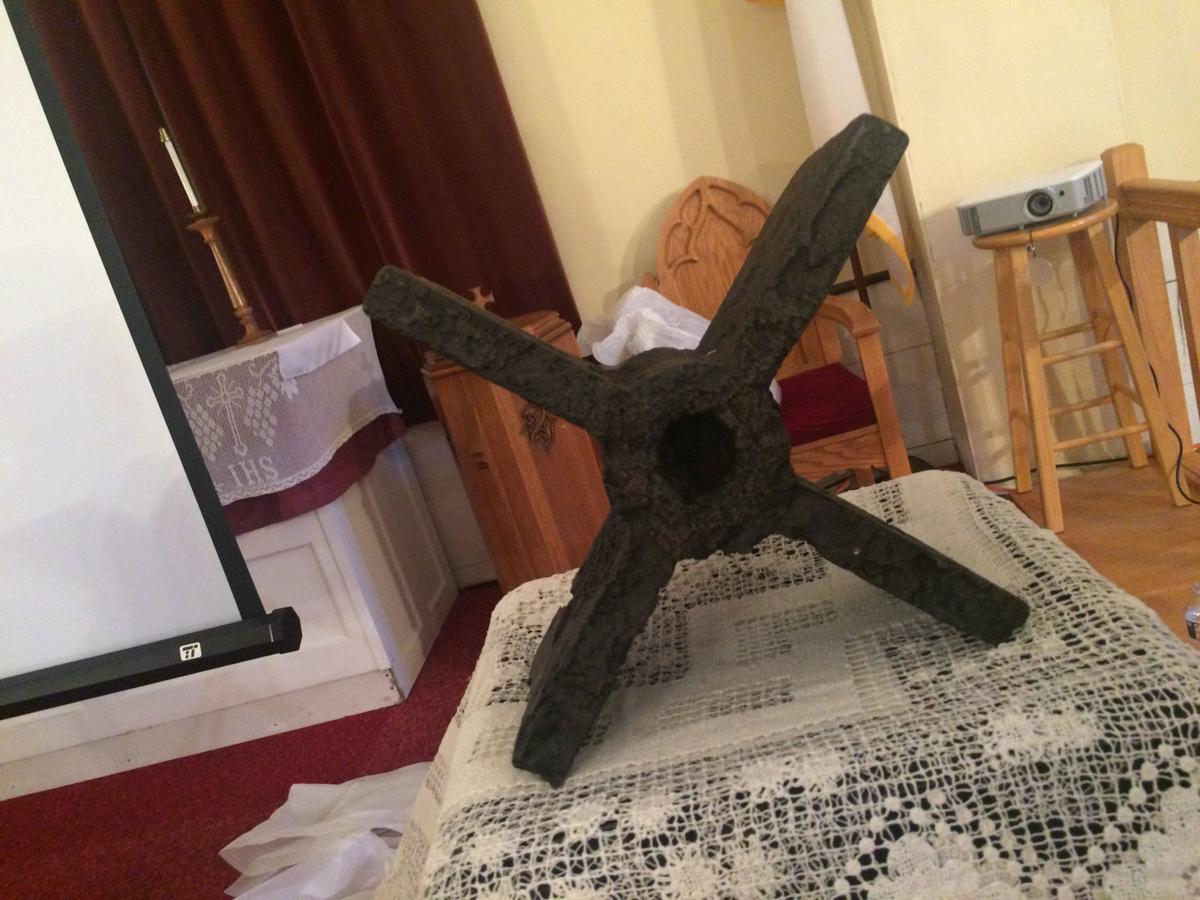 This x-shaped object was found during a dive in Spofford Lake last fall. 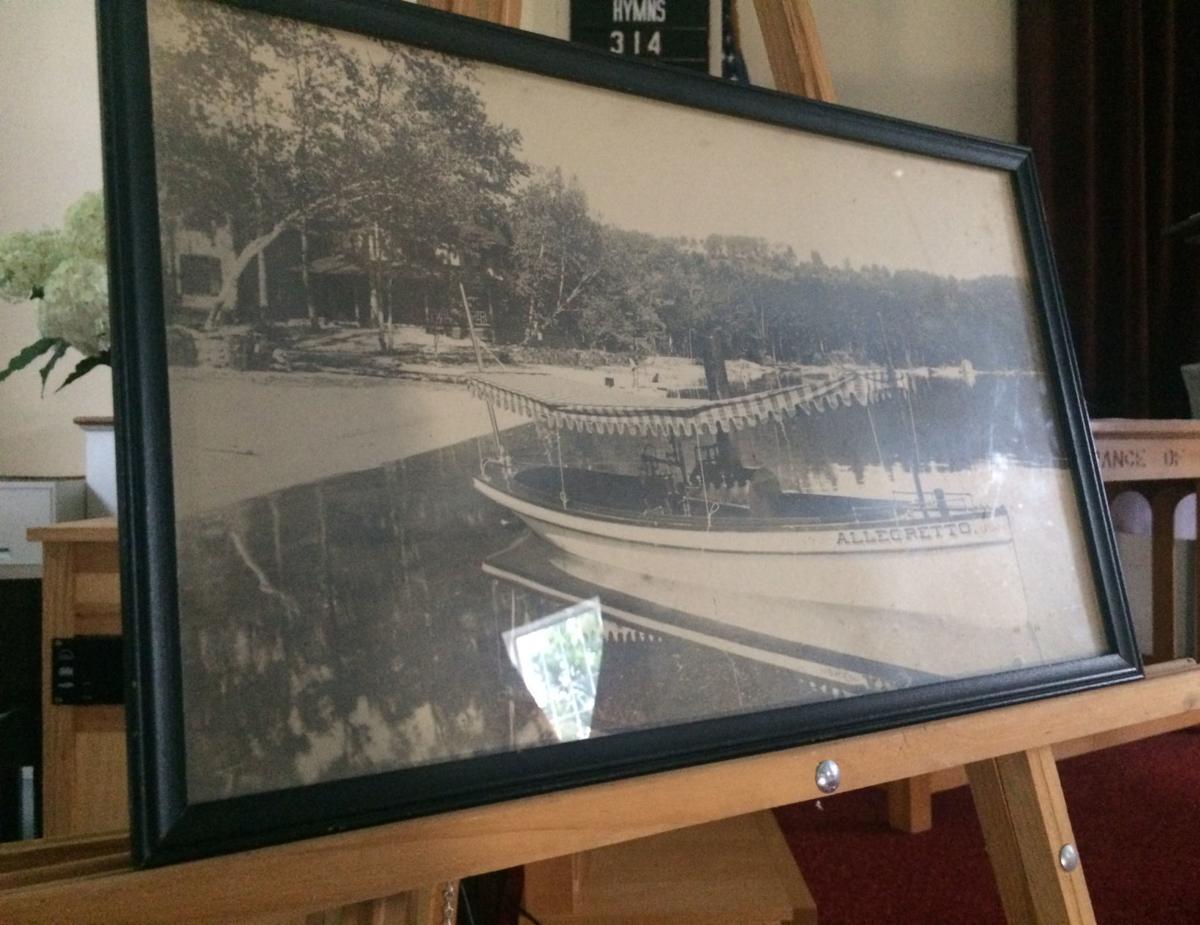 The Allegretto steamboat, pictured here before it sank in a storm in the late 1800s or early 1900s, was used in an era when these boats ferried vacationers to and from hotels and cottages on Spofford Lake.

After a presentation at the Asbury United Methodist Church in Chesterfield Thursday night, diver Annette Spaulding of Rockingham, Vt., speaks to steamboat enthusiast Timothy Lynch, whose nick-of-time email made for a dramatic end to Spaulding’s talk.

This x-shaped object was found during a dive in Spofford Lake last fall.

The Allegretto steamboat, pictured here before it sank in a storm in the late 1800s or early 1900s, was used in an era when these boats ferried vacationers to and from hotels and cottages on Spofford Lake.

CHESTERFIELD — Last fall, Annette Spaulding was diving in Spofford Lake with friends, looking for pieces of a steamboat that sank in a storm in the late 1800s or early 1900s.

The steamboat, the Allegretto, had belonged to Harry T. Kingsbury, of the Kingsbury Toy Co. in Keene. It was an era when steamboats ferried vacationers to and from hotels and cottages on the lake, Spaulding said in a talk Thursday night at the Asbury United Methodist Church.

During their dive, Spaulding’s friend Peter Hinkley saw a rusty, x-shaped object sticking out of the silt on the lake’s floor. He pulled, and it broke off. He thought it could be an anchor.

Spaulding had a different thought. Could it be part of a bomb?

Spaulding, who lives in Rockingham, Vt., has been diving in local waters for decades and has made all sorts of finds, including Native American petroglyphs — rock carvings — in the West River in Brattleboro.

Back in the 1990s, while diving in Spofford Lake, Spaulding encountered a local who told her of a strange occurrence in 1952. This man, she said Thursday, told her he’d been outside with his dad one day when a military plane flew out over the water and dropped a series of bombs.

A Sentinel article from that year references a “widely circulated report” that a plane had “jettisoned at least four bombs through the ice of the lake last April.” (Spaulding said the local resident told her it was nine bombs.) According to the article, two were found, one of them by a couple of teenage boys, Robert Metivier, then 15, and Ronald Farina, then 14.

A crew from Grenier Air Force Base removed the bomb, according to the story.

Farina, a Keene resident now in his 80s, was in the church Thursday as Spaulding told the story of the bombs. She said it’d been in the back of her mind all those years as she searched for the Allegretto.

Sgt. Jeffrey Dade, the commander of the N.H. State Police bomb squad, said Monday that news reports and other sources contain many such stories from the early decades of military aviation. Back then, there were “a lot of ponds and lakes in southern New Hampshire that were utilized as ranges,” he said.

Any bombs left in lakes today are likely those nonexplosive practice ones, Dade said. But just to be safe, anybody who comes across one should not touch it and should call the State Police bomb squad.

Spaulding’s friend, of course, had already broken off what she thought could be the fin assembly of one of the bombs dropped in 1952. After checking with the bomb squad that it would be safe, Spaulding said, she went out the next day and wrestled the 48-pound piece of metal to shore.

She began researching. Dade told her the object did not look like it came from any type of bomb he knew about. He also believed it was too heavy to be a bomb’s fin assembly, he said Monday, but they continued corresponding. Spaulding wanted him to examine it in person.

Last Wednesday — a day before her scheduled presentation, organized by the Chesterfield Historical Society — they met at a rest area, where Dade X-rayed the object. “I don’t know what it is — but it’s not a bomb,” he said, according to Spaulding.

He told her it reminded him of steamboat parts he had seen underwater while diving in Lake Winnipesaukee.

On Thursday, after breathlessly recounting her attempts to solve the mystery, Spaulding pulled out the metal object — four wings, each about a half-foot long, spreading in an “x” from a cylinder. She placed it on an overturned milk crate for all to see.

The story wasn’t over, she said. She was expecting a call. Just before the presentation, she had sent a picture to someone from a hobbyists’ group called the North American Steam Boat Association.

She looked at her phone. “Oh boy,” she said. She had an email from Timothy Lynch, who edits the group’s magazine, The Smokestack. “‘Check the answer from Carl,’” she read excitedly.

“The object looks unmistakably like a cast iron ‘Gudgeon’ which provided the metal bearings for the ends of a wooden shaft,” Carl Kriegeskotte, a member of the association, had written. “… How big was the steamboat wreck? If it has a paddle wheel, perhaps this gudgeon was at one end of the paddle wheel shaft.”

Spaulding pondered aloud the possibility that the gudgeon, or whatever it is, may have come from the Allegretto. She has already found an anchor and other debris — antique bottles, a bugle, what looks like part of a smokestack — in the same area.

But Lynch, reached by phone Monday, threw a little cold water on that theory. He said the piece could have been part of a paddle wheel system on a bigger steamboat, but thinks Spofford Lake would not have had any boats that size. He said it might have come from a mill that used water power.

Spaulding on Monday reacted with apparent enthusiasm. “Now another mystery?” she said. “Now something else to find?”

She already had plans to keep diving in the area, looking for bits of the Allegretto, and to dig up whatever the gudgeon was attached to. She has also been searching for the boat’s designs. And now, she says, she wants to learn more about a historical mill she thinks was near the lake.