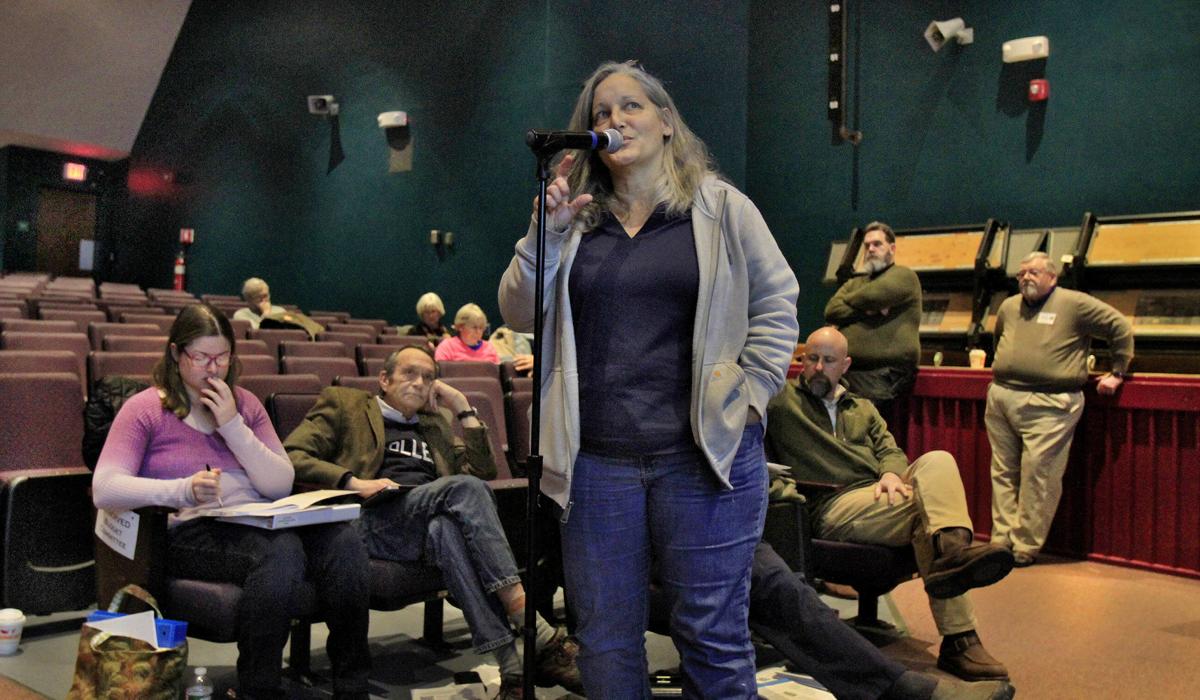 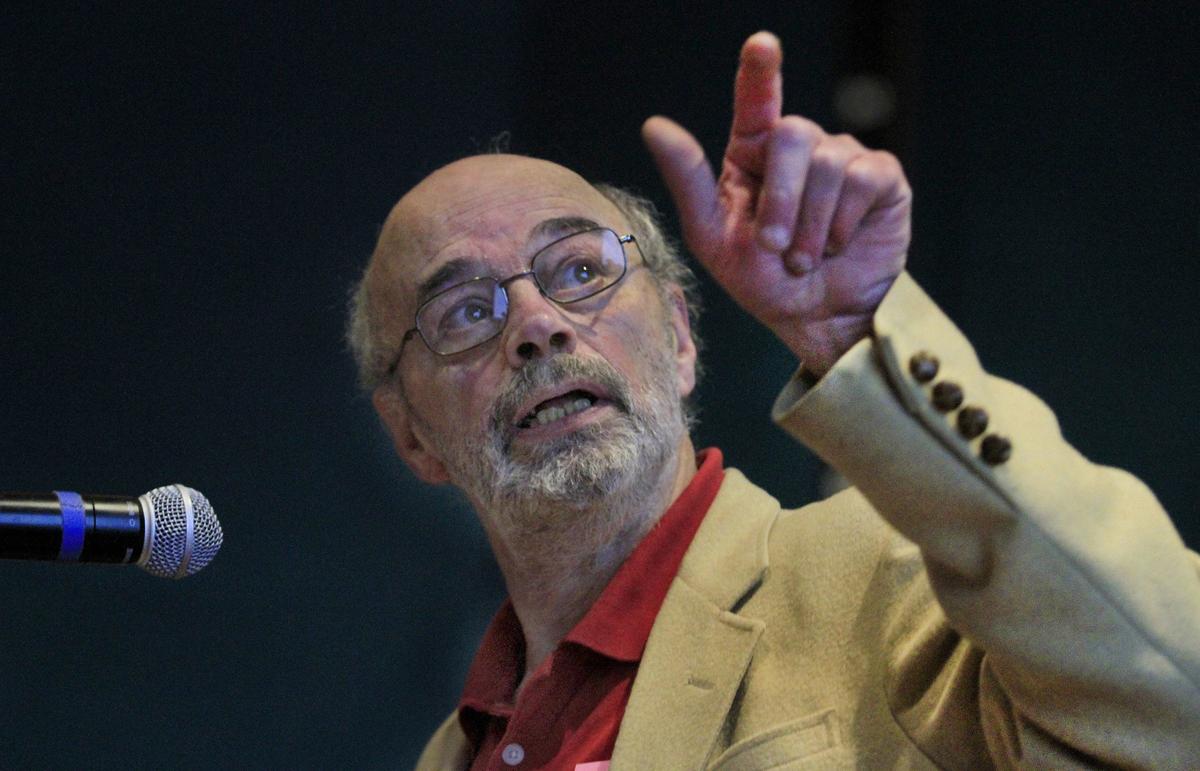 SWANZEY CENTER — After the Monadnock Regional School District budget committee cut more than $1 million from the school board’s proposed 2020-21 budget last month, voters at Saturday’s deliberative session put some of it back.

At Saturday’s meeting in the auditorium at Monadnock Regional Middle/High School in Swanzey Center, members of both the budget committee and the school board made their case for their respective proposals.

School board member Brian Bohannon of Swanzey advocated for the board’s original proposal of just over $34 million, which it developed in coordination with district administrators.

“Any reduction, the board feels, in the proposed number from the administration will most certainly result in reduction in certified staff, support staff, extracurricular activities, and very negatively affect the student experience,” he said.

Lisa Mango of Swanzey, a special-education teacher at the middle school and parent of a student in the district, moved to raise the budget about $750,000 to the $33.7 million figure, restoring most but not all of the school board’s funding request.

Budget committee members said they made their cut because previous years have ended with large surpluses when the district wound up spending less than it had budgeted for.

“We have been underspending our planned budgets for some number of years,” said committee member Dan Coffman of Swanzey. “… So we’ve levied ourselves for all these monies, and we haven’t spent them.”

School board member Robert Colbert of Swanzey responded that some costs, including special education, are hard to predict with precision.

In an interview after the meeting, Superintendent Lisa A. Witte said the district has taken steps over the past two years to improve its budgeting process. She said that should result in more accurate projected budgets.

Several voters questioned the need for extra funding, given the past surpluses, and described the burden of rising property taxes.

In general, if a district ends the year with unspent funds, they automatically go back to taxpayers in the form of reducing the next year’s tax rate. The exception is when the school board or town meeting voters have designated some of those funds for a specific purpose, such as setting them aside in a capital reserve fund.

The Monadnock district covers Fitzwilliam, Gilsum, Richmond, Roxbury, Swanzey and Troy. Residents will vote on the budget and other warrant articles at the polls Tuesday, March 10.

According to district clerk Lillian Sutton, 86 of Monadnock’s 9,642 registered voters, or less than 1 percent, turned out.

Another article that garnered significant discussion would appropriate $250,000 for engineering and design work related to a plan to consolidate the district’s five elementary schools into three.

The school board voted to move forward with the plan in December, following an assessment of the district’s aging elementary-school facilities.

Under the option selected by the board, a new or expanded “south school” would serve Fitzwilliam and Troy children, replacing Emerson Elementary School and Troy Elementary School. Cutler Elementary School in West Swanzey would also close, and an addition would be build at Mount Caesar in Swanzey Center, which all the town’s grade-schoolers would attend.

Gilsum’s STEAM Academy would stay as is.

Colbert noted that completing the engineering and design would not commit the district to the construction project, but would allow the district to apply for state building aid. If the aid comes through, district officials would put a bond on next year’s warrant, according to Witte.

Much of the discussion centered on an amendment, suggested by Ben Drugg of Troy, to add language describing which schools would be consolidated. The addition was approved after a lengthy back-and-forth on the wording.

Budget committee member Meghan Foley of Swanzey moved unsuccessfully to reduce the appropriation to $1. Citing towns that have withdrawn from the district or threatened to do so in the past, she asked what it would mean for the elementary-school reconfiguration if that happened again.

“The fact that the district hasn’t had somebody threaten withdrawal in recent years is kind of an anomaly,” Foley, a former Sentinel editor and reporter who covered the Monadnock district, said in an interview after the meeting. “If you look back at the history, someone’s either trying to leave or has threatened to leave.”

Surry withdrew in 2008 and Sullivan in 2013. Each departure followed a decision by Monadnock to close the town’s elementary school, according to news reports from the time.

Foley said she does not know of any towns currently talking about leaving. But given the scope of the project and the district’s history, she thinks the district should first slow down and discuss its future.

“I’m kind of the approach that, this is a big decision, let’s at least see if anything comes up,” she said.

The rest of the articles saw no amendments and little discussion, though Wayne S. Lechlider, chairman of the budget committee, and a handful of other people proposed cosmetic amendments to three more spending articles.

Lechlider explained that, because the proposed budget is now much higher, the budget committee may want to rethink its stance on these other spending measures — all of which it supported going into Saturday — and is barred from doing so unless an article is amended.

The amendments were all voted down.

In addition to the operating budget and the elementary-school plan, the articles that will appear on the ballot include:

$1,130,000 to remove a set of “temporary” classrooms built several decades ago on the middle/high school property and build new, more permanent ones to replace them.

$240,000 for maintenance and repair work at the district’s schools.

$46,725 to pay for a Swanzey police officer to be a part-time school resource officer. The district currently employs a school security officer, who would stay on, but that person does not carry a gun or have the power to make arrests.

Establishing an expendable trust fund for purchasing new or replacement vehicles and putting in up to $50,000, provided the district ends the fiscal year with enough surplus funds.

Establishing an expendable trust fund for improvements to school grounds and parking lots and putting in up to $60,000, provided the district ends the fiscal year with enough surplus funds.

Authorizing the school district to retain surplus funds at the end of the fiscal year, up to 2.5 percent of that year’s net assessment. Such funds could be used only for emergencies or to reduce the tax rate the following year.

This article has been updated with an explanation of what happens when a district ends the year with a surplus.