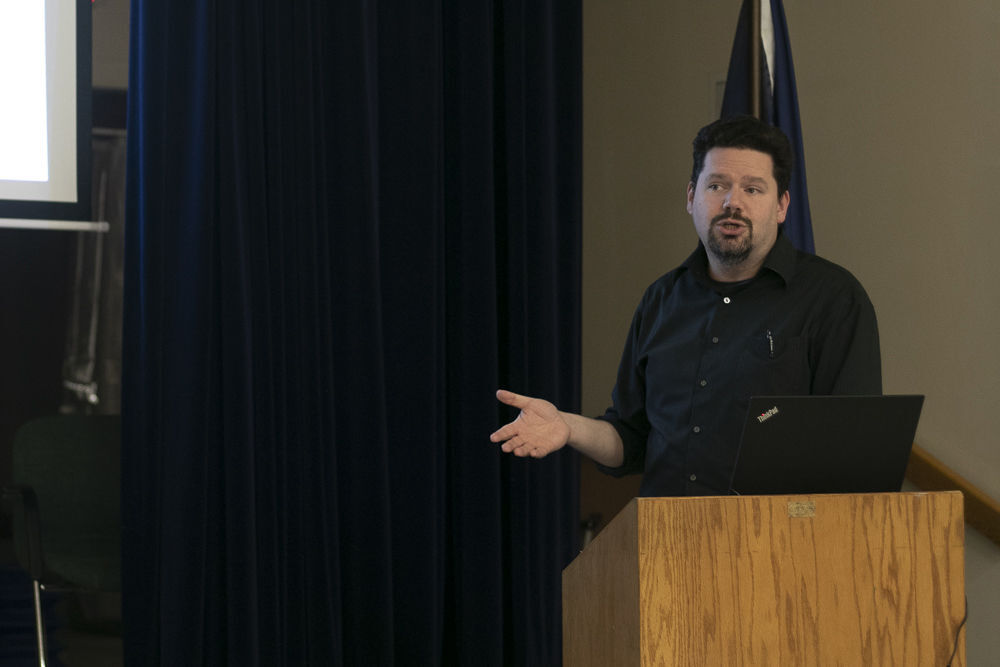 Monadnock Regional School Board Chairman Scott Peters of Troy speaks at a public Wednesday night at Gilsum STEAM Academy. The meeting was one in a series the school board is hosting to gather input on the district's multi-year plan to consolidate Swanzey’s two elementary schools into one, and renovate the district’s three other elementary schools. 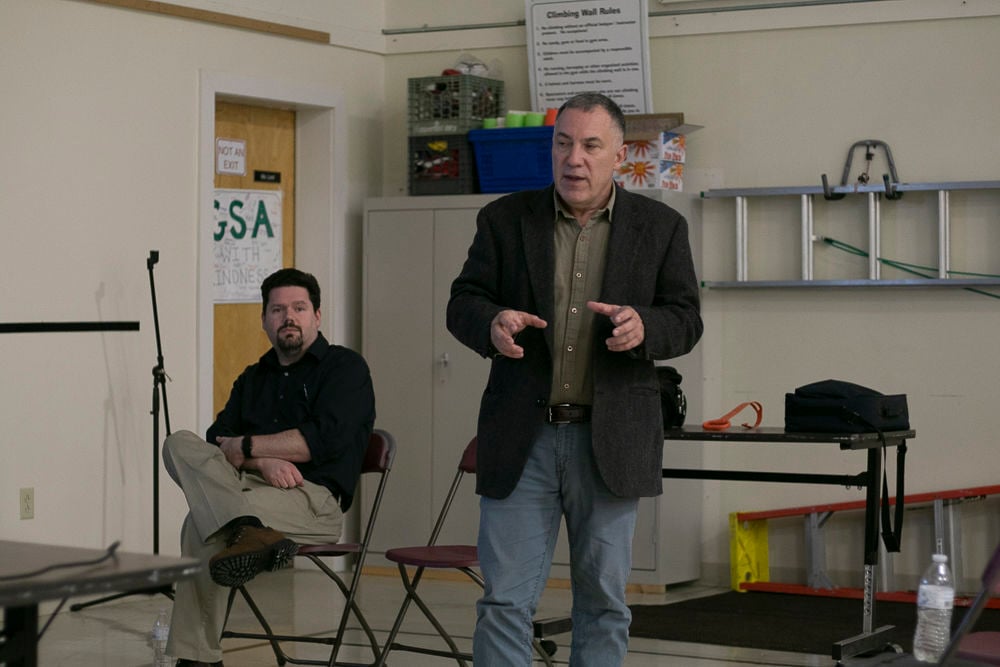 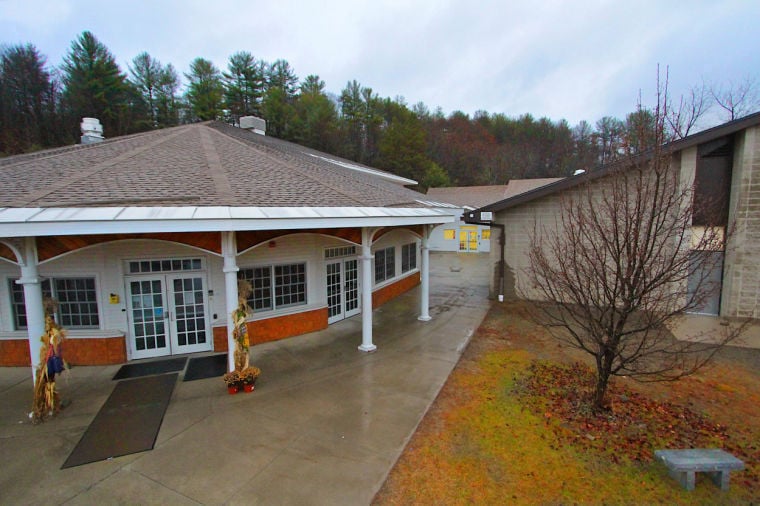 Monadnock Regional School Board Chairman Scott Peters of Troy speaks at a public Wednesday night at Gilsum STEAM Academy. The meeting was one in a series the school board is hosting to gather input on the district's multi-year plan to consolidate Swanzey’s two elementary schools into one, and renovate the district’s three other elementary schools.

GILSUM — The Monadnock Regional School Board is on tour this week, facilitating community input sessions throughout the district and sharing information about the multi-year plan to consolidate Swanzey’s two elementary schools into one and renovate the district’s three other elementary schools.

The district is working with Concord-based Barker Architects to develop designs and blueprints for the renovations, and will take into account feedback from the public meetings as school officials continue to develop the plan, which will require further voter approval, according to School Board Chairman Scott Peters of Troy.

These sessions are the latest in a long-running discussion on how to handle the district’s aging buildings, including five elementary schools serving six towns: Swanzey, Fitzwilliam, Gilsum, Troy, Richmond and Roxbury. Wednesday’s meeting at Gilsum STEAM Academy — the second of three such sessions this week, following one in Swanzey last week — drew about a dozen people, including school board members. Previous meetings had about 20 attendees each, Peters said.

Kyle Barker of Barker Architects on Wednesday provided an overview of problems to be addressed at Gilsum STEAM Academy including handicap accessibility and security challenges associated with the layout of the school. Additionally, the school building sits adjacent to steep slopes, making some parts of the building difficult to access for emergency vehicles.

Attendees chimed in throughout the meeting, offering input and asking for clarification. A few people asked how the community could follow project updates and how the school board will continue educating residents. Peters said the school board is working with a public relations company to improve outreach.

Clement Lounder, a Gilsum selectboard member, noted the importance of persuading the communities that the consolidation and renovations would benefit more than just current students.

“If you’re going to sell a project like this, you’ve got to convince the public why it’s a benefit to everybody in the long run,” he said. “... Keeping the schools open in small towns, that’s a big thing, because it’s actually the heartbeat of our town ... If you want to get the young people to stay in town, you’ve got to have them get together and understand who their neighbor is.”

The academy enrolls students in kindergarten through 6th grade, with a focus on science, technology, engineering, arts and math. It accepts students from all of the towns in the district, as well as out-of-district students who can pay tuition to attend, and is one of three schools that would be renovated under the school board’s current plan.

Under that plan — which the board approved last year — the district would consolidate Swanzey’s two elementary schools and renovate Emerson Elementary School in Fitzwilliam, Gilsum STEAM Academy and Troy Elementary School. Mount Caesar in Swanzey Center, which currently enrolls students from preschool through 2nd grade, would receive an addition to accommodate the 3rd-through-6th graders of Cutler Elementary School in West Swanzey, which would close.

While the proposal is still in its design and blueprinting phase, it’s difficult to estimate the cost of the work the plan calls for, Peters said. There are currently 137 updates and repairs needed across all the schools in the district, he said, which would cost about $22 million total. That figure could increase with inflation over the next several years, Peters said, and there’s no guarantee the backlog of projects would ever be completed as more issues could arise along the way.

Under the current proposal, state aid could cover up to 50 percent of the work, Peters said. The remaining amount would come from a bond that the district would pay back over 20 years, and in the long term, would save the district money, he said.

In March, voters approved appropriating $299,000 for design and blueprinting. The district plans to apply for state funding next year, before putting a bond issue before voters in 2023. The warrant article would need to be approved with a three-fifths vote.

Under the plan, the first renovated school would be ready by the beginning of the 2024 academic year.

Discussions about addressing Monadnock’s elementary school issues have been ongoing since at least 2017, when the district commissioned a facilities assessment to understand the costs of keeping the school buildings operational.

According to a presentation from Barker Architects earlier this year, all the elementary school buildings in the district need work, though some are in worse shape than others.

The firm considers Cutler Elementary — slated to be closed under the current plan — to be the most challenging site because the school sits close to property lines. The school is still using temporary classrooms built in the 1990s, and the entrance doesn’t have a secure vestibule, making it difficult to regulate visitors. The fire lane and escapes do not meet code requirements, and not all levels of the school are handicapped accessible.

The district has not decided what would happen to the Cutler Elementary School building if it were closed, Peters told The Sentinel after the meeting, but potential options include using it for storage, converting it into district offices or selling it to a developer.

The building is still considered safe, Barker said, and is inspected by the fire department each year. The deficiencies weren’t clear until Barker executed a thorough evaluation of all the life safety code requirements in the school, he said, and now that the school board is aware of the issues, those deficiencies should be addressed.

Troy Elementary school — which was built in the late 1800s and hasn’t had significant additions or renovations in 50 years — has the most needs in the district, according to Barker Architects. Among its deficiencies: The school has no elevator, most of the building is not handicapped accessible and its heating system is inefficient.

Overall, Emerson Elementary School in Fitzwilliam is in decent condition, according to Barker Architects. However, the school’s heating system needs upgrading, and there are no offices attached to the entrance vestibule, creating a security issue.

Mount Caesar is in better shape than the other schools as the district has focused on improving the facilities over the last several years, Peters said at Wednesday’s meeting. With spacious and well-lit classrooms, it is the standard for the rest of the district. But the school could stand to be improved, according to the presentation from Barker Architects, as it does not currently have a gymnasium separate from the multipurpose room.

The current plan is not the school board’s first attempt at finding a solution to address these deficiencies across the five schools. Roughly two years ago, the board approved a plan that involved building one new school for students from Troy and Fitzwilliam and shuttering Emerson and Troy elementary schools. Cutler would also have been decommissioned and its students moved to an expanded Mount Caesar.

But in March 2020, that plan was shot down by voters, who acted against delegating $250,000 for design and blueprinting.

Monadnock’s final community input session will be Thursday at Troy Elementary School and is scheduled to begin at 7 p.m.

More information about the project is available at mrsd.org/domain/615. People who could not attend the community information sessions can email questions and comments to Peters at speters@board.mrsd.org or school board member Cheryl McDaniel-Thomas at cmcdanielthomas@board.mrsd.org.