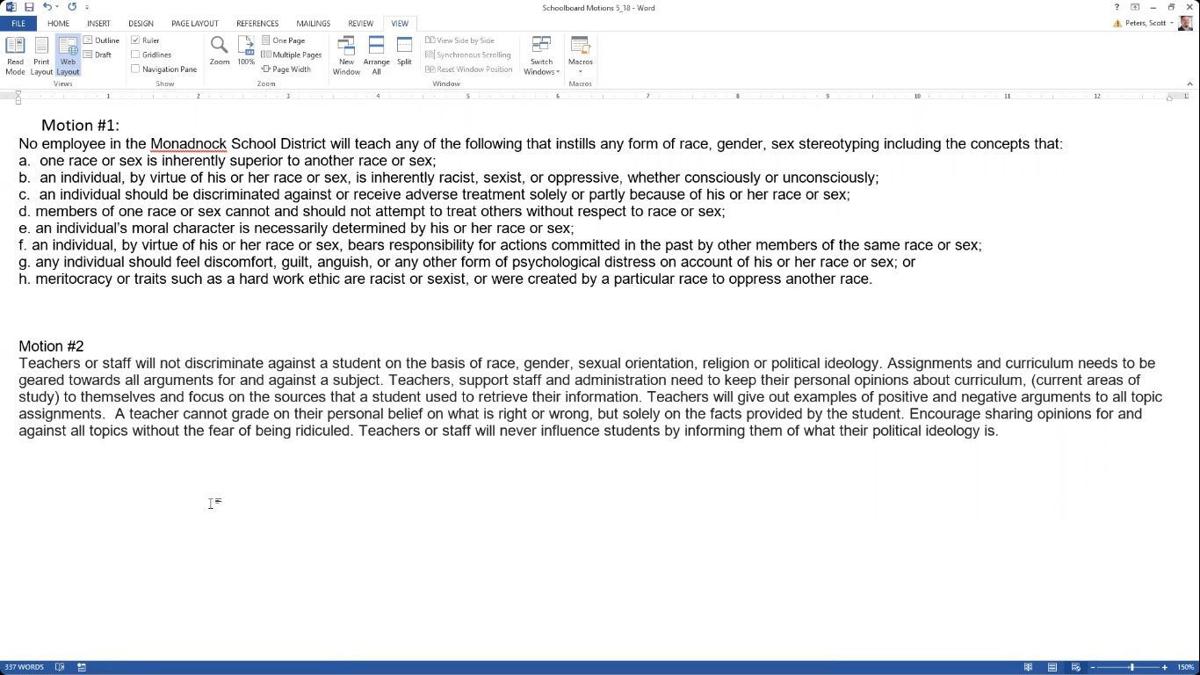 The text of two motions introduced by Monadnock Regional School Board member Dan LeClair of Swanzey, who said he adapted the language from N.H. House Bill 544.

SWANZEY CENTER — While several school districts have formally opposed the “divisive concepts” proposal being considered at the State House, a Monadnock Regional School Board member is suggesting that the district adopt a policy based on it.

At last week’s school board meeting, member Dan LeClair of Swanzey introduced a pair of motions, the language for which he said he adapted from House Bill 544. The group voted to refer both proposals to the board’s policy committee for further review, including whether existing district policies already address the issues LeClair raised in his motions. That process could take several months.

The first proposal would restrict any Monadnock staff member from teaching anything “that instills any form of race, gender [or] sex stereotyping,” including that “an individual, by virtue of his or her race or sex, is inherently racist, sexist or oppressive, whether consciously or unconsciously,” and that anyone should feel guilt or any other type of psychological distress due to his or her race or sex.

LeClair’s second motion would prohibit staff members from “[influencing] students by informing them of what their political ideology is,” and require teachers to provide “positive and negative arguments to all topic assignments.”

The bill before the N.H. Legislature that LeClair used to craft his motions would cut off state funding for any school, business or organization that spreads “divisive concepts” about topics such as racism and sexism.

Supporters of the state proposal have expressed concern over the teaching of critical race theory, a scholarly framework that approaches the study of the United States through a lens of race and power and holds that systemic racism is a part of American culture.

LeClair, who has twice run unsuccessfully as a Republican for a seat in the N.H. Senate, said he introduced the two motions after several conversations with parents and students in the district. These students, he said, have changed what they have written in assignments for fear that a teacher would look unfavorably upon them based on their arguments.

“I’ve also talked to students where they’re afraid to speak out and give their opinions because even their own peers will harass them,” LeClair said during the May 18 school board meeting, which was conducted via Zoom. “I know politics is a hot topic, and it’s very divisive at the adult level, and it is pretty much the same at the school level, the student level, as well.”

LeClair added that he does not know how widespread of an issue this is within the district — which covers Fitzwilliam, Gilsum, Richmond, Roxbury, Swanzey and Troy — but he thinks the best way to address it is to teach students to listen to all opinions on controversial topics.

“Everybody has their opinions, and we should respect them,” he said. “And I don’t think that’s happening.”

Superintendent Lisa Witte said she had not heard the specific complaints LeClair brought to the board before Tuesday's meeting, but added that the district has policies in place for handling issues with curriculum and instruction. Witte encouraged anyone who does experience issues like LeClair described to speak to their school principals, or to her.

The district can use this information to “make sure that all of our teachers and what’s happening in our classrooms is following the policies that we have in place around instruction and academic freedom and those types of issues,” Witte said during the meeting last week.

The board’s vote to send LeClair’s motions to the policy committee, which is scheduled to meet next on June 2, was overwhelming.

“It just needs more thought,” board member Karen Wheeler of Gilsum said. “… Policies are always brought to the board, and we have them for one meeting, and then we vote on them the second meeting. So to vote on this just based on that, I would have to vote no because I feel we should discuss things more as a board and not pass them so quickly.”

Board member Kristen Noonan of Fitzwilliam, who chairs the policy committee, said the group will review existing policies to see if anything in LeClair’s motions would be redundant. After that, she said, LeClair’s proposals could be back before the full board in a month or two.

The legislation that LeClair used to craft his motions has drawn criticism from educators and businesses statewide. On the same night the Monadnock board began discussing LeClair’s policy proposals, the Keene Board of Education voted to approve a resolution opposing the so-called “divisive concepts” bill, which has been incorporated into the House’s state budget proposal.

Critics of the state-level legislation have said they fear it could limit important classroom conversations on topics like race and gender. Several local educators told The Sentinel they have never seen educators indoctrinate students with their personal ideologies, which backers of the bill have warned is a problem in New Hampshire.

School boards in Concord and the Hanover-based N.H. School Administrative Unit 70 have passed resolutions opposing the bill, according to N.H. Public Radio. Additionally, more than 250 businesses and organizations — including the Durham-based Oyster River School District and the Portsmouth School Board — have signed onto a letter from N.H. Businesses for Social Responsibility, a group that promotes socially-minded business practices, opposing the legislation as “antithetical” to Granite State values like diversity and inclusion.

More than a dozen local businesses and groups, including C&S Wholesale Grocers, Inc., Savings Bank of Walpole and the Monadnock Food Co-op, have signed the letter, which argues the proposal would “have a chilling impact on our workplaces and on the business climate in New Hampshire.”

Gov. Chris Sununu has cited free speech concerns in saying he does not support the bill, which was introduced by a trio of Republican state representatives, according to NHPR. But LeClair said he does not believe his policy proposals would restrict academic freedom, since students can still ask questions and write about controversial issues.

“So we’re not inhibiting students’ free speech,” LeClair said in an interview Monday. “I just don’t want teachers telling a child that they should have less opportunity, or more opportunities, because of the color of their skin, or their gender, or their political affiliation, or anything else.”

This story has been updated to clarify Superintendent Lisa Witte's comments on the specific complaints LeClair brought to the board at last Tuesday's meeting.