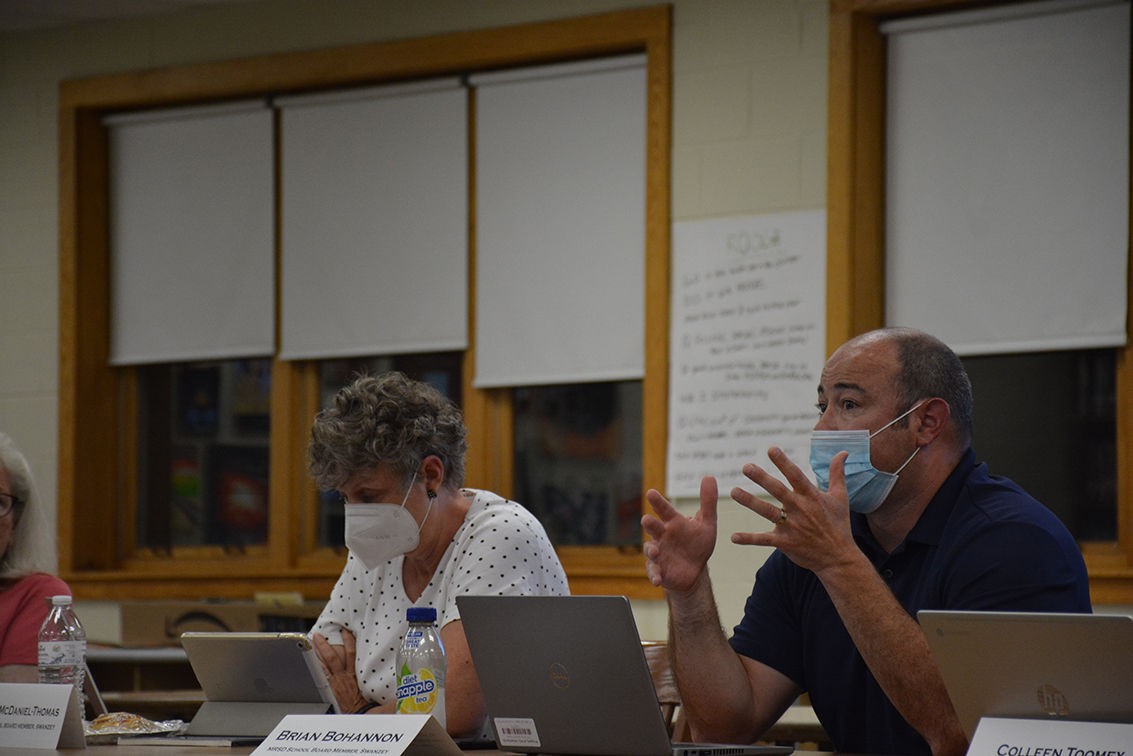 Monadnock Regional School Board member Brian Bohannon of Swanzey speaks against a proposal to inform families of COVID-19 cases within their children’s classrooms as fellow Swanzey representative Cheryl McDaniel-Thomas listens. 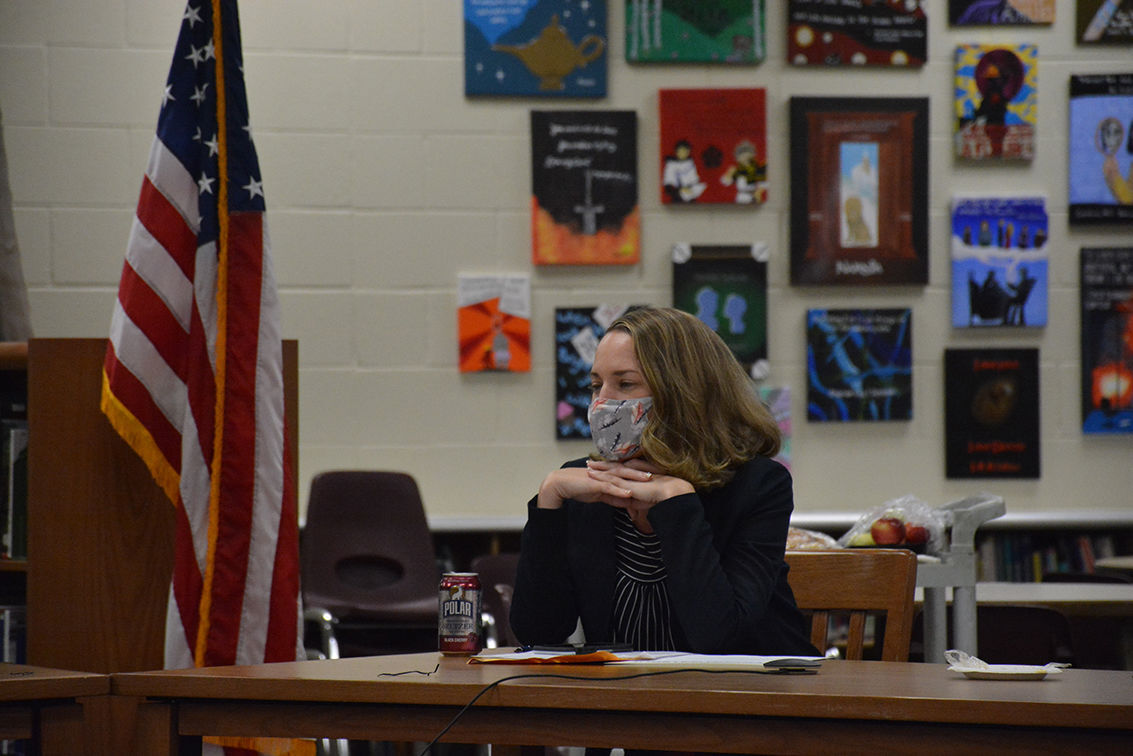 Monadnock Regional School Board member Kristen Noonan of Fitzwilliam speaks during Tuesday's board meeting. Noonan voted against a proposal to notify families of COVID-19 cases within their children's classrooms, saying the district's current policy of notifying the entire school of an infection works. 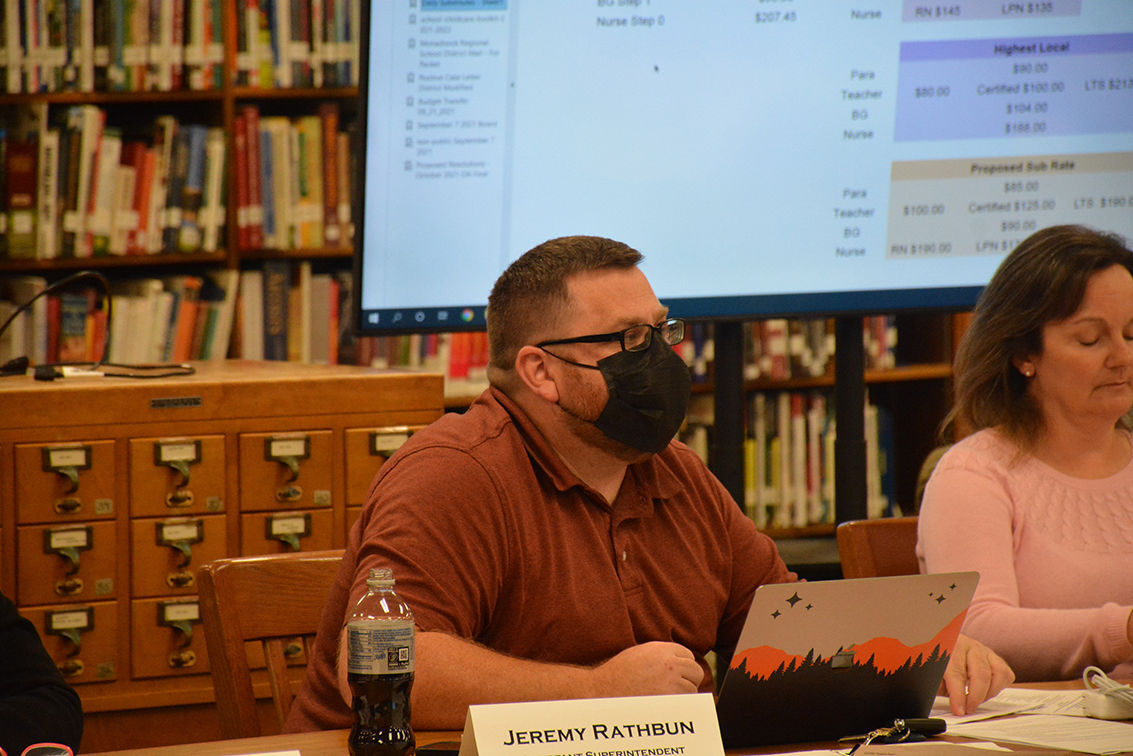 Monadnock Regional School Board member Brian Bohannon of Swanzey speaks against a proposal to inform families of COVID-19 cases within their children’s classrooms as fellow Swanzey representative Cheryl McDaniel-Thomas listens.

Monadnock Regional School Board member Kristen Noonan of Fitzwilliam speaks during Tuesday's board meeting. Noonan voted against a proposal to notify families of COVID-19 cases within their children's classrooms, saying the district's current policy of notifying the entire school of an infection works.

SWANZEY CENTER — The Monadnock Regional School District will keep its current policy for notifying families and staff of COVID-19 cases, the school board decided Tuesday night, though several board members advocated for increasing communication when infections occur.

Under the current process, the district — which covers Fitzwilliam, Gilsum, Richmond, Roxbury, Swanzey and Troy — notifies all families and staff when their school has a confirmed coronavirus case. Monadnock also maintains a district-wide online COVID-19 tracker, which lists active and cumulative cases by school. At Tuesday’s board meeting, representative Nicholas Mosher of Roxbury proposed informing parents when an infection is reported within their child’s specific classroom.

“I’d like parents to be able to make the best decision possible, and teachers, so that they can their families safe, as well,” Mosher said during the meeting, which was held in the library of Monadnock Regional Middle/High School in Swanzey Center and broadcast via Zoom.

Mosher’s motion, seconded by board member Karen Wheeler of Gilsum, also called for the district to inform families and staff of COVID-19 cases in two different ways — one electronically, by email or automated phone call, and another physically, by a written notice sent home with students. The proposal failed by a weighted vote of 9.834 to 2.045.

As of Tuesday, Monadnock had reported a total of 13 COVID-19 cases since the school year began Aug. 30, including two active cases at Monadnock Regional Middle/High School, and another at Troy Elementary School. The district does not specify whether reported cases of the viral respiratory illness are in students or staff members.

When the district learns of a confirmed coronavirus case, the school principal or nurse reports it to the state health department, Assistant Superintendent Jeremy Rathbun said. State health officials then ask about who else was in close contact with this person at school, and the families of those children are contacted individually. Simultaneously, Rathbun said, the school principal sends an email to the entire school community, and the district updates the online COVID-19 tracker.

“So, this kind of poses a challenge, I think, for families in that situation, where they’re made to make a judgement based on the entire school, rather than more pertinent information,” said Mosher, who attended the meeting remotely. “So that’s one of the challenges I see with our current process.”

Board member Brian Bohannon of Swanzey said he understood Mosher’s goal of providing families with more information to help consider taking extra health precautions if their children are potentially exposed to the virus but ultimately opposed the motion.

“I think where I’m at is you still have that choice to take those precautions if the school is notified,” Bohannon said. “That’s a parent choice or a family choice. So by using the process we have now, we’re not taking that choice away. We’re still offering that choice.”

Wheeler, one of three board members to vote in favor of the proposal motion (along with Mosher and Michelle Connor of Richmond) said the school-wide letters generate speculation within the community, and more specific letters would help provide families and staff with more clarity on the health situation at their schools.

“When a school receives a letter like this, unfortunately that’s what people who are concerned do, is they are like, ‘OK, which child isn’t in school?’ ” said Wheeler, who also attended the meeting via Zoom.

But board member Kristen Noonan of Fitzwilliam said she believes classroom-specific notifications would only fuel speculation about private health information.

“It’s a small community, and you do get the parent detectives,” she said. “As soon as we get one of these letters, everyone’s talking to each other, trying to figure out who it is. I don’t think it’s the district’s place to make that easier.”

Additionally, Rathbun said the proposed changes to the notification process would be difficult to implement at the middle and high school levels, where students interact with more groups of students and staff on a daily basis.

“So, let’s say a student is out with COVID. They’re in five different classes and lunch,” Rathbun said. “You’re notifying. Someone has to figure out the 120 other kids that kid was around, plus their hallway movement. It becomes a big notification and a big job.”

It would also be hard to add a written notification process at the middle/high school, Rathbun said, since the school doesn’t currently have a system for sending notes home to all parents. Ultimately, Rathbun added, the district would have been able to enact the proposed changes, if they had passed, but they would have required a substantial amount of work, particularly for school officials in the upper grades.

“Anything is doable,” he said. “And that’s what we’re here to do, what we’re directed to do. But it becomes very cumbersome.”