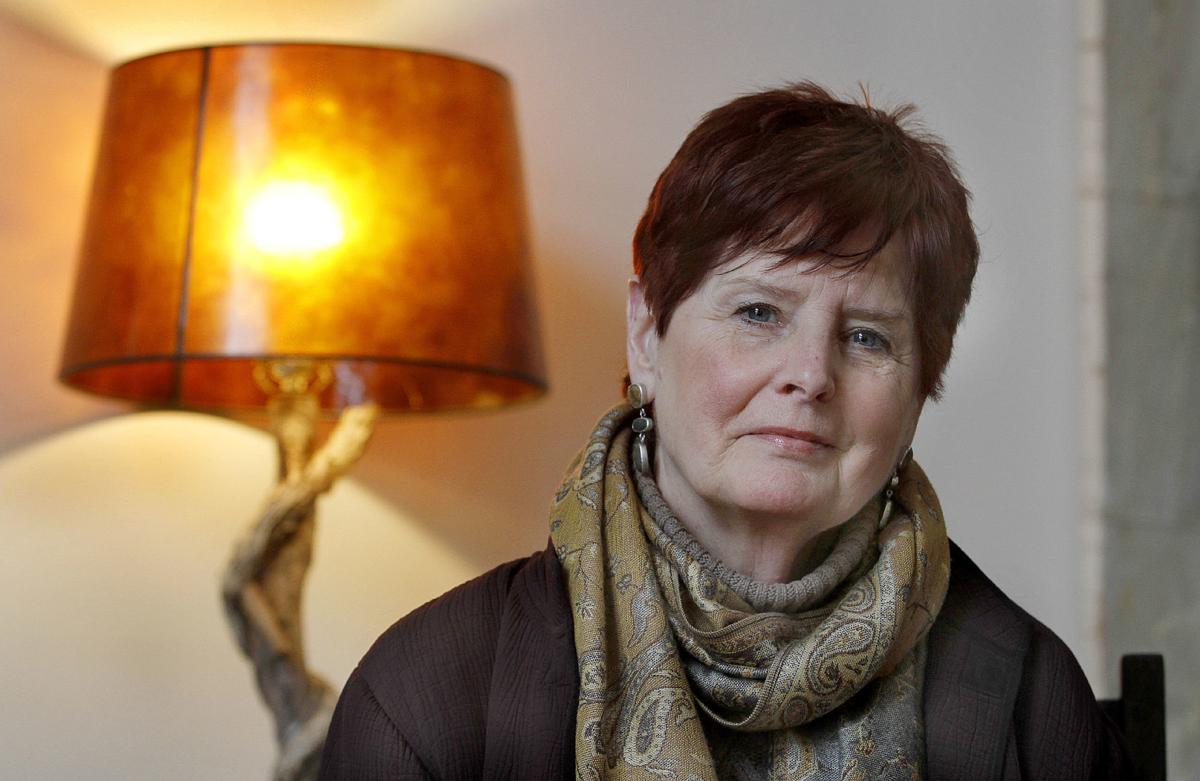 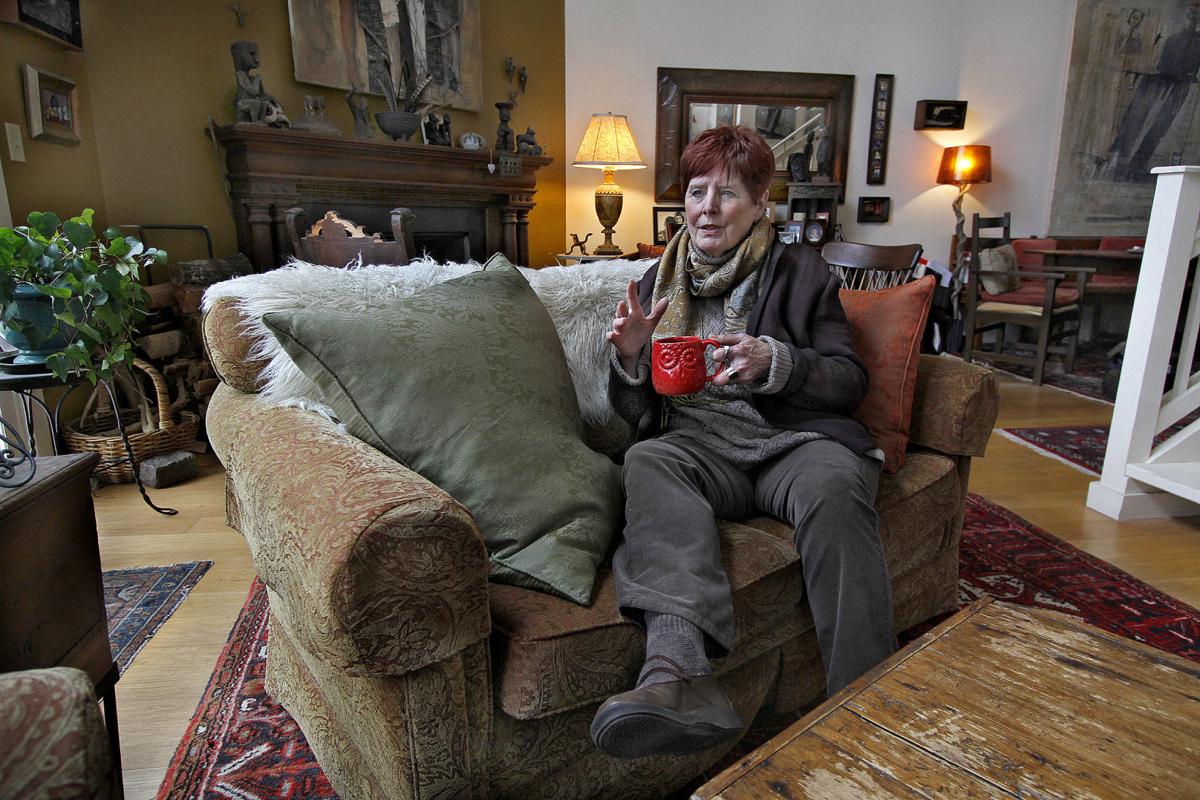 “People have a longing to tell their story, to write an account for one’s self; you want to know more about yourself,” says Pam Bernard, shown here in her Walpole home.

“People have a longing to tell their story, to write an account for one’s self; you want to know more about yourself,” says Pam Bernard, shown here in her Walpole home.

WALPOLE — It begins at a large rectangular table just off the kitchen at Pam Bernard’s home on a hill overlooking this tidy New England-postcard town. Eight people arrive at the house and join her at the table, and there’s serious work to be done — lessons, critiques and discussions both heavy and lighthearted. During the three-hour session, there will be some laughter, but perhaps one or two might cry. It can be, at times, an emotional experience.

They range in age from late 50s through 70s, certainly life’s veterans, from diverse backgrounds. And they’re here for a reason: to learn how to write their memoirs.

They’re not necessarily professional writers, although a few might have some experience at that, so most are learning the basics of writing — no small task unto itself. But more importantly, they’re learning how to look at their lives as not simply a recitation of experiences, but at a much deeper level, attempting to put into words a theme of meaning to their existence.

That’s a difficult but greatly rewarding task, says Bernard, the 73-year-old leader of the sessions, who regularly throughout the year offers eight-week workshops on memoir writing.

“Memoirs are based on memory, and what do we know about memory?” she asks as she prepares a cup of tea in her kitchen prior to an interview. “We know that memory is very unreliable.”

That conundrum can be at the crux of the challenge of memoir writing, she says, because so much of what we recall in our lives can shift, realign, become somewhat of an obscuring fog as time does its work on memories. You may remember an event in your life, but it might not have occurred the way you recall — the details may be a bit off. The event might actually have happened to someone close to you, and not to you at all. Or, there may be events, even spans of time, for which you have no specific recollections. Memory can be a trickster, a feint, a wispy shadow.

Bernard is a welcoming, warm woman with striking blue-hazel eyes, who emits a spirit of both teacher and careful listener. She began leading memoir-writing workshops at her home three years ago, and each workshop entails three-hour sessions one day a week for two months. She limits the number of participants so the sessions can remain intimate and concentrated.

“It’s a remarkable thing that happens,” she says. “People have a longing to tell their story, to write an account for one’s self; you want to know more about yourself.

“Memory is not what you expect it to be. ... Memory that has morphed in our head tells us about who we were at the time of life we’re thinking about,” she says.

Bernard is the youngest of nine children in a family from Branford, Conn. — “the only one born in a hospital,” she adds. She moved to Walpole from Boston with her husband in 2004, where they had lived for three decades. Why? “We lived near the Big Dig project and wanted to get out of town.”

She is an accomplished painter and writer; her paintings have been displayed in numerous galleries, and her poems and narratives widely published. She received her bachelor’s degree in art history from Harvard University and her Master of Fine Arts from Warren Wilson College Graduate Program for Writers in North Carolina. She’s an adjunct professor of writing at Franklin Pierce University in Rindge and has taught at Emerson College in Boston and the New Hampshire Institute of Art in Manchester.

She has also been awarded fellowships from the National Endowment for the Arts, Mass Cultural Council and The MacDowell Colony in Peterborough, and won the prestigious Grolier Prize and Pablo Neruda Prize, both for poetry. Her poems have appeared in numerous journals, and in 2015, CavanKerry Press published her novel-in-verse “Esther,” which describes a young woman’s struggle against violence and loneliness. It’s loosely based on the young life of her mother.

Last August, she lost her husband, Harry Bernard, who died suddenly as the two were walking in front of the Walpole Post Office. He was 80, and an accomplished artist, advertising executive and founder of a graphic arts company in Boston.

Both were prominent artists in Boston and founding members of the 249 A Street Cooperative. The groundbreaking project turned a derelict, six-story building in South Boston into a thriving artists’ enclave, and it’s still a vibrant center for the arts. At the time of the cooperative’s founding, in the early 1980s, South Boston — “Southie” — was anything but an arts hub, more of a rough-and-tumble neighborhood better known for infamous gangster Whitey Bulger.

“There was a lot of suspicion of us there,” she says, “but we were successful in getting it established.” South Boston is now undergoing a significant gentrification.

She and her husband met in New York City and had been married for 50 years when he died. It has been, naturally, a difficult time for her. Through the loss, she has continued to write — in fact, she’s working on a memoir herself. She also intends to start painting again and has begun writing a book on how to write a memoir.

A memoir, Bernard explains, is not the same as an autobiography; it is not a recitation of events or accomplishments. Nor is it a family-history project or compilation of vignettes and anecdotes with no connecting theme. And one does not simply plop down in front of a keyboard or face an empty piece of paper and begin writing a memoir. It doesn’t work like that, she says.

“It has to rise up, organically,” she explains. “It’s an accounting for one’s self. You want to know more about yourself; you want to open up honest dialogue with yourself. No one sits down and writes page one and then writes until the end of the book. It’s a mosaic, a braiding.”

With her workshop participants, she starts with a prompt, which often can be a work by a noted poet. “A prompt can let you come in the back door to an emotion.”

Memories, she says, “are all about shifting and meaning something else,” and she notes that memories back to childhood can be especially tricky and sometimes deceptive. “Children’s minds are very malleable.”

Participants must feel “safe” in the session, and nurtured, she says — “not babied, but nurtured.” Then they can begin to ponder their pasts.

“It can start maybe with just a paragraph, and then all of a sudden, you lay more down, a theme may begin to appear.”

This is the point when emotions can be conjured, as participants realize there may be more to their memories than they suspected. During the workshop sessions, they share their work, and it is critiqued. “I would never have the nerve to teach others unless I struggle with the same issues. These remarkable people bring as much energy and honesty to my own work as hopefully I do to theirs,” she says.

Yvette Yeager is a Keene psychotherapist who has enrolled in several of Bernard’s workshops. “Personally, I have learned a great deal from her and continue to do so. When writing a memoir, I’ve developed a genuine appreciation that in order for it to be juicy, I need to write both from the voice of the young child and for the adult who is reflecting back. Without that authentic child’s voice, coupled with the insight that the act of writing often miraculously produces, one is merely sharing what happened — dry reading, as far as I’m concerned.

“Perhaps Pam’s approach appeals to the therapist in me, who is always seeking, through questions, the meaning a particular event has had in one’s life, one’s development,” Yeager says.

Sarah Franklin, a modern dance instructor at MoCo Arts in Keene, has also participated in a workshop.

“Pam provides a very intimate setting; it’s very personal,” Franklin says, “The three hours go by very quickly. She is very intuitive with each student … and she’s always positive; there is always positive feedback. You come out feeling that you’ve accomplished something important.”

Bernard emphasizes that timing is key in deciding to write a memoir, and that may explain the older ages of the participants. “They see the end of their lives. There is an urgency; there’s a lot at stake. Memoirs are about ‘re-inhabiting’ your life, paying homage to your life.”

In memoir writing, the skills of fiction writing are needed, she says, but with one vital difference. “You are the ‘I’ in the work, the narrator. You have skin in the game. You are a narrator who can pivot. If you don’t stay engaged, it falls apart.”

It’s time to wrap up the interview. She has long ago finished her cup of tea, and she must get on with other business. As she escorts the interviewer to the door, she walks past the big wooden table, and one wonders what wonderful, poignant, uplifting or sad stories have started there.

At a glance: Pam Bernard