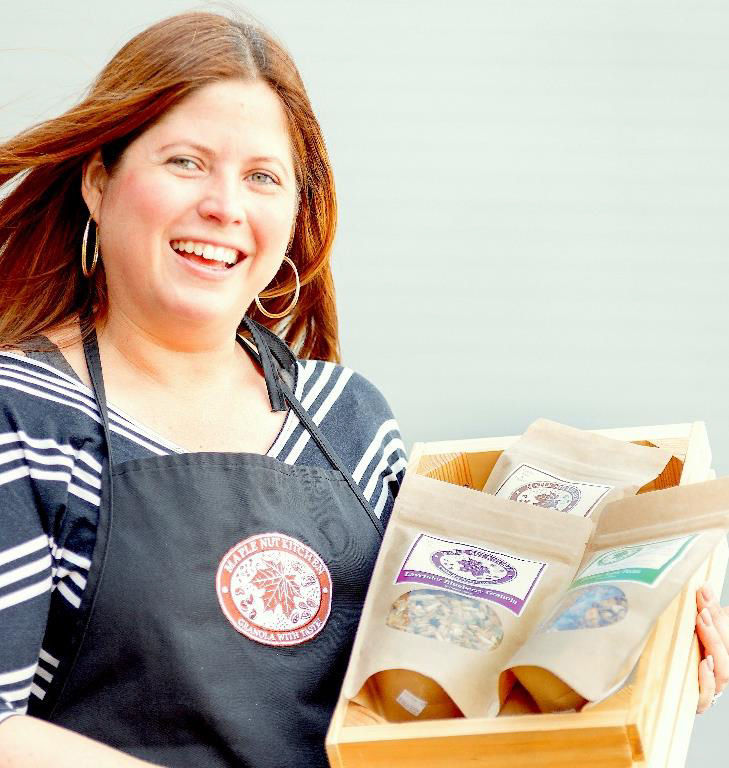 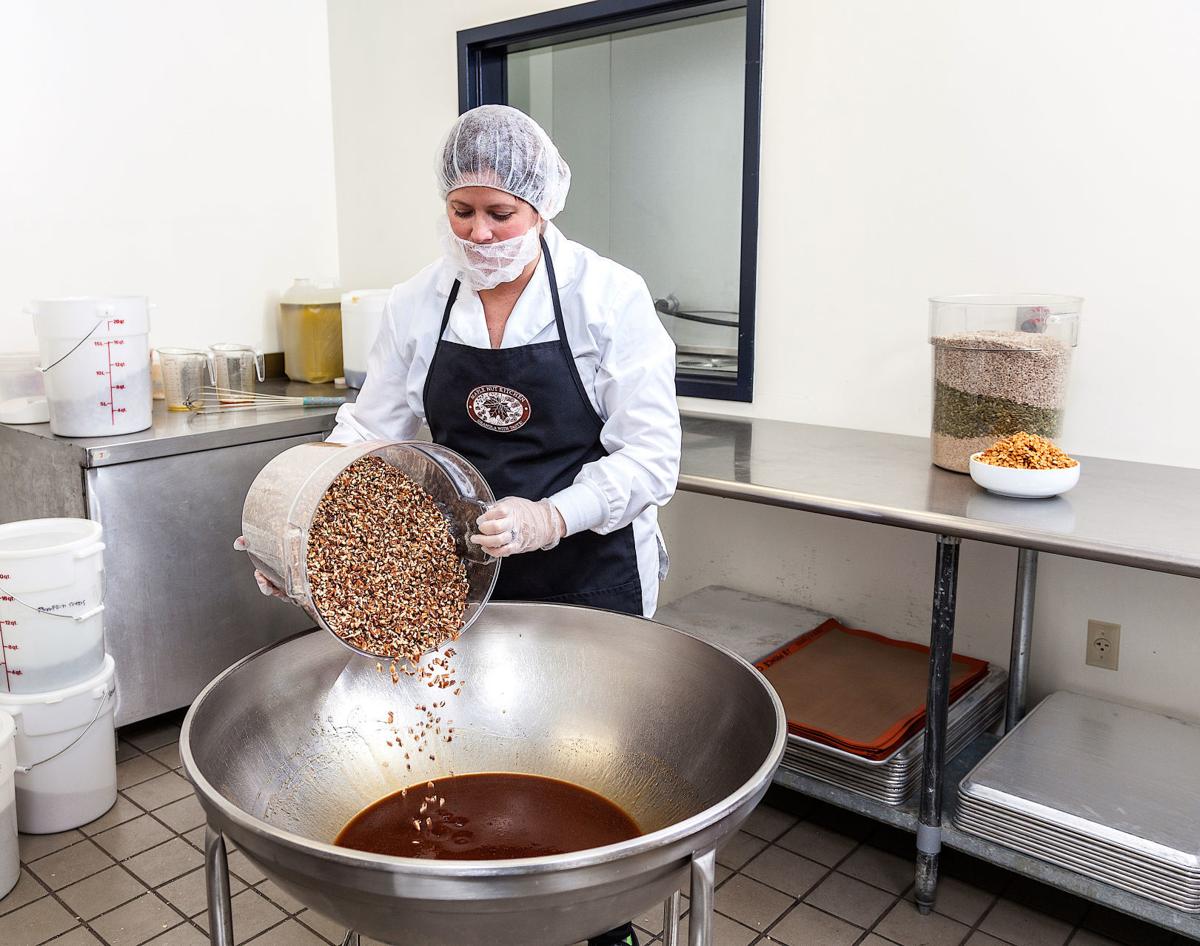 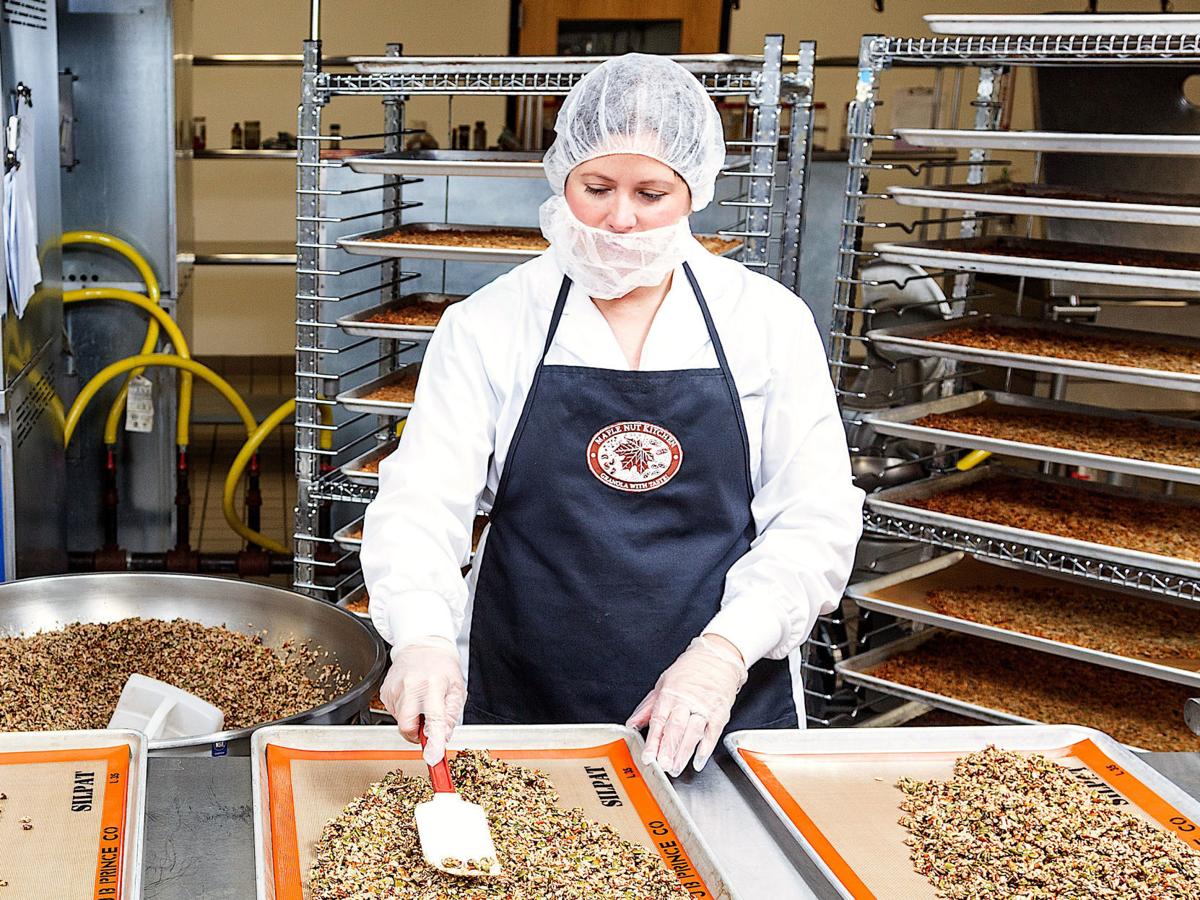 “I really thought that that’s what I loved to do and that was going to be my career. But as time went on, I was becoming more and more unfulfilled,” she says. “And I realized that I had this dream deep down to become an entrepreneur — and I always was interested in a healthy lifestyle.”

When she heard that a small granola company in Keene had gone up for sale, it seemed like the perfect opportunity, especially considering her love of baking. So, in 2014, Cubilla-Lindblom decided to take the leap, purchasing the operation with her husband and rebranding it Maple Nut Kitchen.

Since then, the 38-year-old says she has made a lot of changes, experimenting with new ingredients and combinations to make the line her own. The company sells flavors such as mocha chip, pumpkin gingerbread and western cocoa cayenne.

She’s also grown the company substantially. It now has six employees and nearly 250 wholesale customers, and moved to its own facility in Swanzey last year after outgrowing a shared space in Keene.

Cubilla-Lindblom says developing Maple Nut Kitchen has made her feel what she hadn’t felt in finance: Fulfilled.

“Just people loving my product is what it comes down to,” she says. “It’s what inspires me — it’s what keeps me motivated.”

A native of Asuncion, Paraguay, Cubilla-Lindblom moved to the United States in 2000 to study business management at Kansas State University. That’s where she met her husband, Guy Lindblom, whose trade — bridge construction — moved the couple all over the country for different projects.

After living in Florida for 11 years, they moved to Keene in 2013, when he began work on a bridge project in Brattleboro. Cubilla-Lindblom says she initially was hesitant about the harsh New England winters, but soon left that worry behind.

“I wasn’t sure at first, but as soon as we came up and started looking for houses, and I saw how beautiful it was — there’s a certain magic to New England and especially New Hampshire, and I just really fell in love,” she says.

So, it was bittersweet when, six months ago, Cubilla-Lindblom and her husband moved to Charlotte, N.C., where she still heads up Maple Nut Kitchen remotely.

Though she does miss being able to stop in to the production facility on Prospect Street every day, Cubilla-Lindblom flies to the Granite State at least once a month for her work, and is in constant contact with her team from her home office in North Carolina, she says.

It’s not necessarily a typical setup for a small business, says Nancy DuBosque, regional director for the Keene office of the N.H. Small Business Development Center. But the fact that it works is a testament to the way Cubilla-Lindblom has run her operation, she notes.

“Once you get a well-oiled machine going and people are not only loyal to the company but like their jobs and like working together, it’s all doable,” DuBosque says. “And she’s proven that it’s doable.”

“She’s extremely passionate about quality, which can also be a challenge when you’re trying to meet the bottom line. A lot of entrepreneurs might go with a less expensive ingredient just to make the profit, but for her, it’s important that it’s 100 percent great ingredients,” DuBosque says. “And that really shows.”

And the industry is taking note — Maple Nut Kitchen was recently named New Hampshire’s 2019 Woman-Owned Small Business of the Year in Manufacturing by the U.S. Small Business Administration.

Cubilla-Lindblom credits her team with making the award possible, but when asked where her entrepreneurial spirit comes from, she traces the trait to her upbringing.

“There’s a lot of entrepreneurs in my family, and I’ve always looked up to them. I just didn’t want to face the fact that I was cut out for that,” she says. “I think that I thought that I wasn’t, and I ended up realizing that I was not being fulfilled by working for other people and working in the corporate world.”

She says it’s difficult to be so far from her family, and there are things she misses about her home country, too. But she tries to see her family whenever she can, and notes that it’s one of her goals to get better at leaving work behind — at least for a little while — when she travels to visit them in Paraguay.

“In the first pretty much four to four and a half years of this journey, I did not know how to step away. So for years, I worked my hardest and put all my energy into the business, and I think it took me five years, but I finally learned that I need to step away and take time for myself,” she says.

Perhaps the most important thing she’s learned in that time, she says, is how to let things “roll off her back” rather than panicking when things go wrong — and her business is better for it.

“I’m probably on mistake number 980, but I try not to look at failure as failure, if that makes sense. I think of it more as it being a point in time that offers you an opportunity to improve,” she says.

“We all make mistakes, and I think it’s important to grab that moment as a chance to learn and improve things.”

At a Glance: Vivian Cubilla-Lindblom