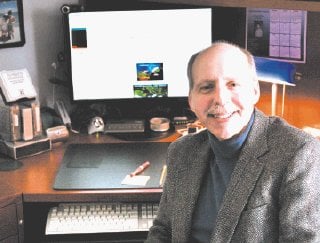 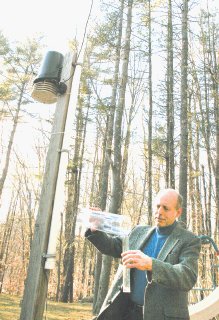 Richard Lefko of Peterborough empties water from a rain gauge in his backyard.

Richard Lefko of Peterborough empties water from a rain gauge in his backyard.

As a child, Richard Lefko took a walk with his dad, headed toward the Long Island coast. As they walked, they watched as neighbors rowed boats down the street. As they got closer to the water, Lefko stared with 9-year-old eyes at a giant hunk of major road ripped away from the highway, revealing the pipe guts beneath.

“It might have been (Hurricane) Delores, or one of those,” Lefko said, recalling his walk decades later from the dry safety of Peterborough.

This is why this affable international trade compliance and global logistics manager turns into a crack weather forecaster by night (and during his spare time), complete with his own weather website.

What started as just a hobby has garnered him more than 115,000 page views, paid sponsorship and a following of loyal weather watchers looking to him to see if they should take the boat out this weekend or hunker down for Stormageddon.

Growing up in Long Island, one is never too far away from the ocean, Lefko said. And it seemed to Lefko, now in his 50s, never very far away from a hurricane, at least as he was coming of age. Lefko was fascinated by the storms. He started following them with the voracious interest of a child following a comic book cliffhanger.

This interest was piqued all the more when he managed to get ahold of a weather radio, a specialized radio that picks up the broadcasts from the National Weather Service.

During hurricane season, he’d lay out his special map of the Atlantic Ocean, meticulously labeled with coordinates, as he listened to the calm staccato of the storm latitudes and longitudes coming over the airwaves. Methodically, he’d chase the storm as it moved across his map, wondering which path it might take.

“It goes back to the unpredictability,” he said. “Where was it going? And back then, without all of the Internet satellites that we have up and everything else it was a lot of guesswork. … If you look back at the historical track, there were hurricanes that just appeared without any notice.”

Lefko went off to school in California and even took a few meteorology courses. But it was not to be.

“The realities of needing a job and paying bills and paying rent and all of those things came home pretty quickly, and I needed to pursue the things that I knew I could go make a living at,” he said. “So I did that.”

But he couldn’t quit the weather, not completely. Though it doesn’t seem it, his job is all about logistics and is actually heavily influenced by, yes, the weather.

“Part of my job is getting goods from one place to another around the planet,” he said. “So knowing that there are problems in China because of Typhoon whatever, or understanding that trucking is held up in the Midwest because of a snowstorm in the Rockies, helps me with my own role explain to people who are waiting for these goods what is going on and if they are going to get something on time or seeing, ‘Oh geez, there’s a big tornado system coming, I don’t think it’s going to make it there on time.’ ”

Several years ago, he took some web programming courses. At that time there were a smattering of people who knew he was interested in following the weather and asked him to send them an email with what the weather would be like on a particular day or weekend. Pretty soon, more people heard about it and more people wanted an email. Today, he has 300 people on his email list.

While he was still in the beginning stages, he realized he had more information than he could stuff into his email blasts, so he started the website. He started gaining followers. Eventually, the site became so popular, when he threw it out there that he might need some sponsorship to cover the costs of software, he had several takers.

“I’ve known Rich for many years, he’s just a great guy, lots of integrity,” said Jack Gullage, owner of JDG and Sons, a remodeling and painting business in Hillsboro. “And I support the site because it gives you a lot of important information and it’s something different than you get just watching TV or just reading in the newspaper or on the Internet.”

And what he adds, Gullage said, is the more personal — and comical — side of the weather.

“He’s a bit of a character,” Gullage said.

Lefko said he’s not out to make money with the site. In fact, he seemed the happiest talking about the emails he receives from followers telling him that because of his forecasting he was able to help keep people safe.

“That’s kind of the nice part about sharing your hobby,” he said. “That other people find some value in the information.

Do you have any other hobbies? If so, what are they and how do you find time for them with such an expansive weather hobby?

Answer: “Doing things with my family. Fishing, golf. I write Apple Mac Product reviews for MyMac.com. Yes, I spend a lot of time doing this stuff … but isn’t that what life is all about? Doing what you love and spending time with those that you love.”