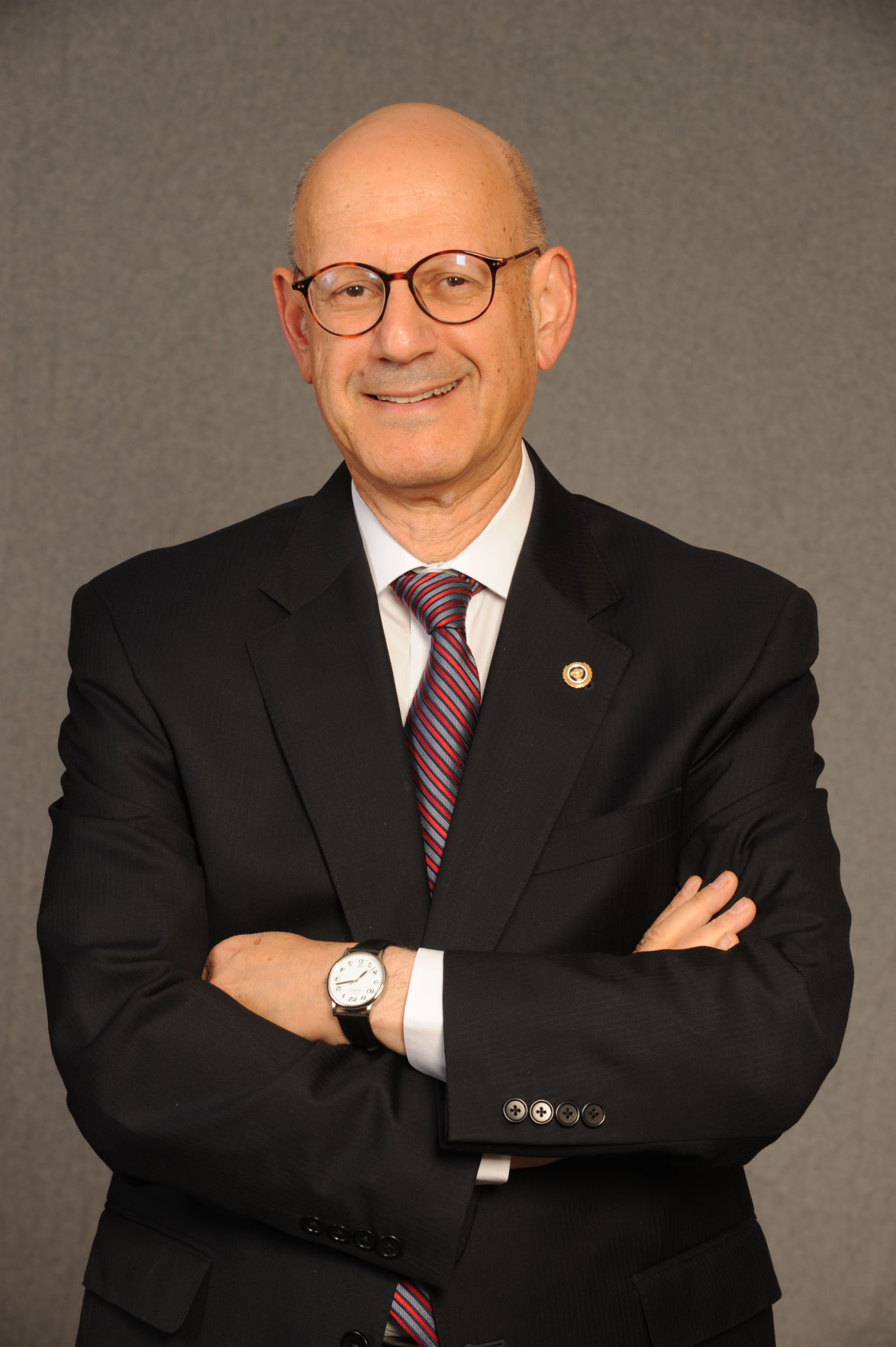 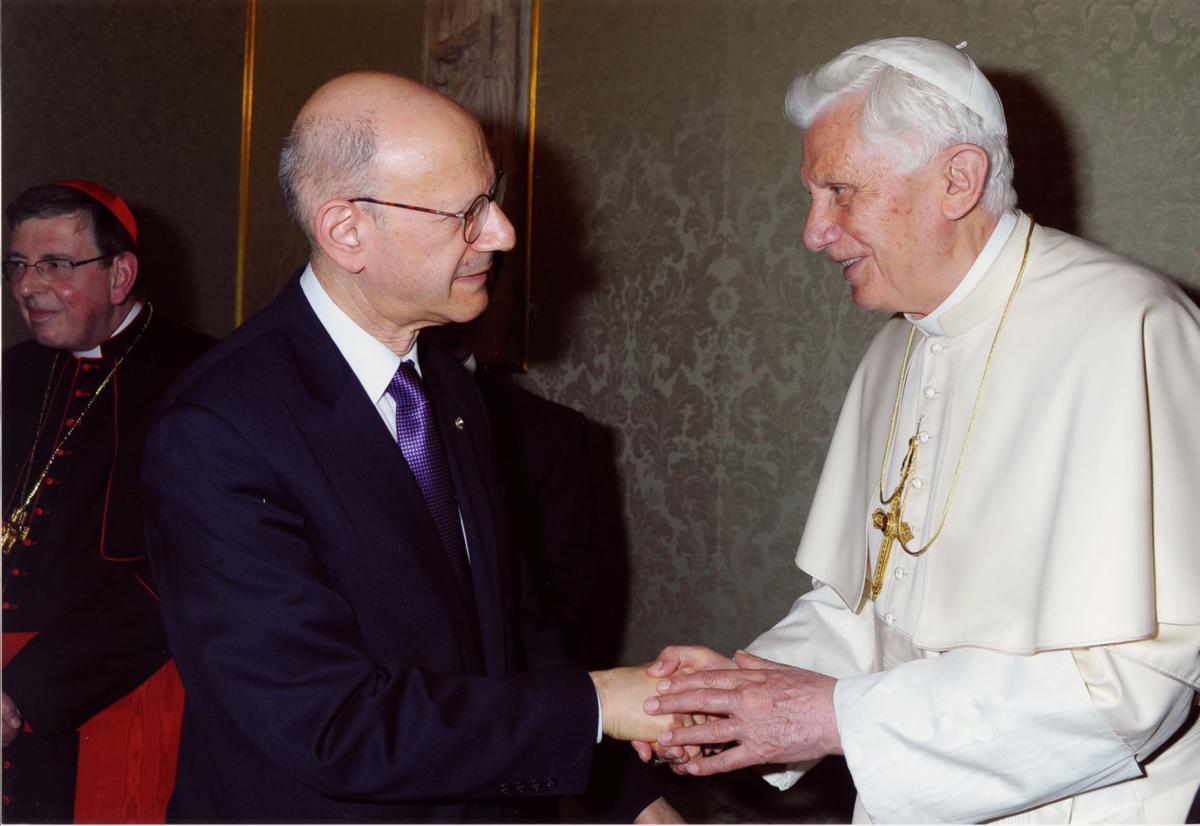 In May 2011, Daniel S. Mariaschin was part of a B’nai B’rith International leadership delegation that met with Pope Benedict XVI at the Vatican. B’nai B’rith described the papal audience as the latest in meetings between the service organization and leaders in the Roman Catholic Church “to advance positive Catholic-Jewish relations.” 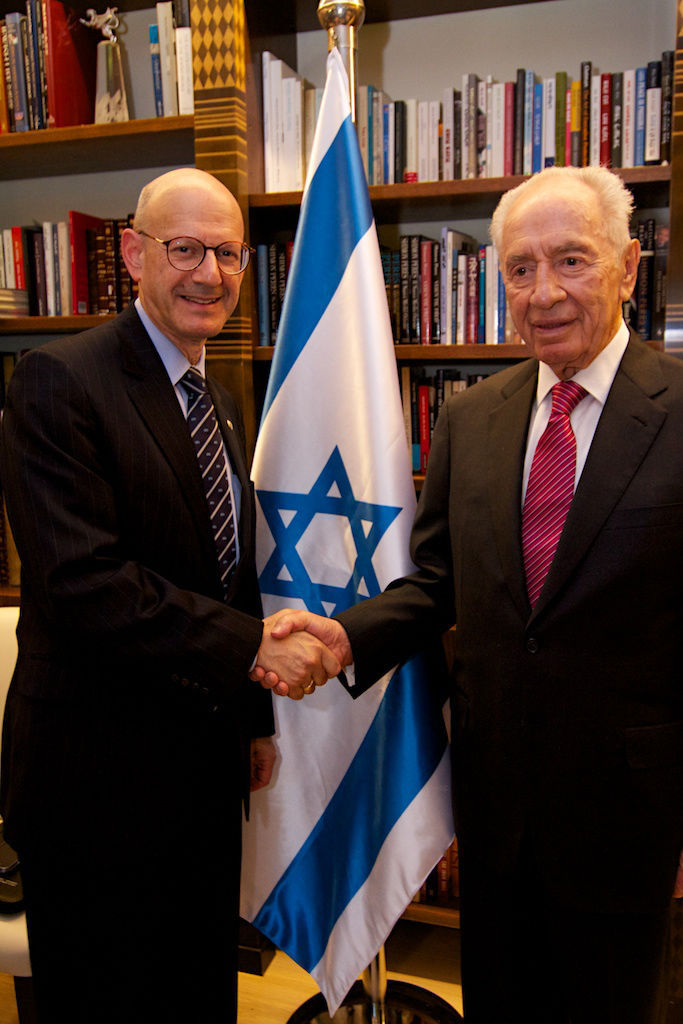 Daniel S. Mariaschin, left, is shown in this undated photograph with Israeli politician Shimon Peres, who served as president, prime minister and in several other leadership posts before his death in 2016. 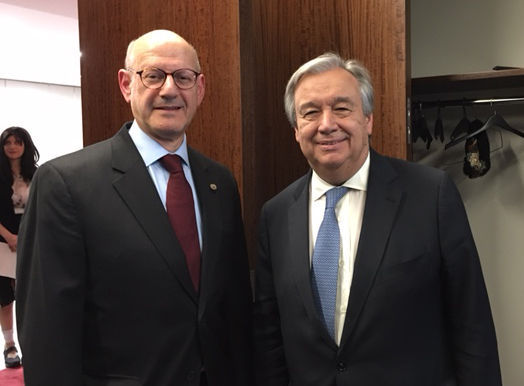 In May 2011, Daniel S. Mariaschin was part of a B’nai B’rith International leadership delegation that met with Pope Benedict XVI at the Vatican. B’nai B’rith described the papal audience as the latest in meetings between the service organization and leaders in the Roman Catholic Church “to advance positive Catholic-Jewish relations.”

Daniel S. Mariaschin, left, is shown in this undated photograph with Israeli politician Shimon Peres, who served as president, prime minister and in several other leadership posts before his death in 2016.

The phone interview with his hometown newspaper almost over, Daniel S. Mariaschin had a question of his own.

The CEO and executive vice president of B’nai B’rith International has a strong affinity for Keene and the Monadnock Region. He grew up here, graduated from Monadnock Regional High School in 1967, and spun records at weekend record hops at the school, leading to a job at radio station WKNE.

Thus, he wanted to know: How is the Monadnock-Keene Thanksgiving Day football game shaping up?

After all, 50 years ago, he was part of the pageantry that is high school football, playing trombone in the high school band. “Claudia Howard,” he says, in an ode to one of Monadnock’s earliest music teachers. “She put a band on the field.”

Mariaschin today wields one of the most powerful voices in the world advocating for the Jewish community. The 68-year-old has led B’nai B’rith International for a quarter-century and is director of its Center for Human Rights and Public Policy. He meets regularly with heads of state from every corner of the globe. He’s had audiences with three popes. He received the Cultural Pluralism Award from the U.S. Commission for the Preservation of America’s Heritage Abroad in recognition of his work in Central and Eastern Europe. And that’s just a resume sampler.

Though he lives just outside Washington, D.C., in Chevy Chase, Md., his roots are planted in the Monadnock Region. His parents are buried here. “I really consider Keene to be my home,” he says.

B’nai B’rith, which means “Sons of the Covenant,” is the oldest Jewish service organization in the world, founded in 1843. Mariaschin is its longtime leader, representing B’nai B’rith on numerous national and international delegations. He’s been at the forefront of Holocaust education programs, particularly in Lithuania, the home country of his parents, who immigrated to the U.S. in the early 1900s.

Recently, he’s been involved in negotiations with several countries in Eastern Europe regarding the return of Holocaust-era assets and compensation for private property taken by the Nazis and Communists.

About 15 years ago, he was part of a negotiating team that successfully brought back to Israel more than 400 Torah scrolls that had been hidden by the Nazis in a warehouse in Vilnius, Lithuania. Although most couldn’t be repaired, he says, retrieving them gave him a great deal of satisfaction, one of many in a long and productive career.

“The opportunity to be able, face to face, to meet with foreign ministers and prime ministers, presidents of countries, to have a dialogue about issues that we’re concerned about with people at that level, I think, has been the best opportunity in this career,” he says.

Mariaschin is a prodigious writer. He’s written articles for The New York Times, The Wall Street Journal, the Los Angeles Times, the Chicago Tribune, the Washington Times and Newsday.

Some of his most heartfelt writings are personal. He’s published essays about his parents, Saul and Rose, and former teachers. It whisks him back to his youth and his upbringing in the Monadnock Region.

Last year, he wrote a moving piece for The Sentinel titled “Remembering Mrs. Phippard,” about a teacher at Mount Caesar School who asked him to speak to his 3rd-grade classmates about the upcoming holiday of Hanukkah — how that simple act had a profound effect on him.

In recent years, he penned Mother’s Day and Father’s Day tributes to his parents — his mother died 32 years ago and his father 43 years ago. Growing up in the 1950s, table talk at dinner was almost always about world affairs, discussions that served as building blocks in his own career. And the family had a voracious appetite for reading.

Every morning his father read the American Herald Tribune, and the family’s written news intake was supplemented by radio. They didn’t have a TV until he was older. As a young child, he says, “I recall hearing my parents talk about big news events of the mid-’50s and late ’50s.”

Mariaschin’s parents originally settled in New York City before moving to Keene and opening the Blue Shop, a women’s clothing store in the Colony Block of Central Square. His two older sisters graduated from Keene High and today live about 10 minutes apart from each other in Israel. Mariaschin saw them just last week and says his oldest sister, Sondra, will be coming to Keene for her 60th class reunion next year.

The family moved to North Swanzey, near Dillant-Hopkins Airport, before Mariaschin entered 1st grade. He remembers four Jewish families lived in Swanzey and about 25 Jewish families altogether lived within a 25-mile radius.

He attended Hebrew school three days a week at Congregation Ahavas Achim, then at 91 Court St. in Keene. Though his father was a lay person, he was learned in Hebrew and often taught classes when the congregation had difficulty finding a permanent rabbi.

“He was a regular kid,” says Aaron Lipsky, a retired Keene lawyer and three-term mayor of the city, of Mariaschin. “He was a friendly, outgoing person, as you would expect from somebody who has gone on to head a major international religious organization.”

Last year Lipsky spearheaded the creation of an exhibit celebrating Jewish history in the area, “From Peddlers, to Shopkeepers, to Professionals: A History of the Jewish Community in Cheshire County.” On display at the Historical Society of Cheshire County earlier this year, it focused on the original immigrant families, and their descendants, who founded Congregation Ahavas Achim.

Mariaschin didn’t fit the exhibit’s thesis, but he was included because of his prominence in the national Jewish community. “We decided that he was certainly worthy enough … that his story was exceptional in regard to his achievements,” Lipsky says.

Except for one incident, Mariaschin doesn’t remember being a victim of anti-Semitism in the area. That case was deftly handled by Mrs. Kellom, his 5th-grade teacher at Cutler School, which housed grades 5 through 8. “In hushed tones, she told me that the janitor had found a swastika on the wall of the boys bathroom,” Mariaschin says. “She wanted me to know that, and wanted me to know it had been washed off and taken care of.”

To this day, Mariaschin says, he appreciates being informed of what had happened, and the steps that were taken. Otherwise, he describes it as a normal childhood with good friends.

“Parents of those friends, as I look back, were really very open-minded,” he says. “I would say they wanted their children to be inclusive of me. Most of my colleagues come from big cities and large Jewish communities in the work that I do. … I come from an upbringing that was very positive because of my parents, and on the other side to have such good friends, good teachers, who had an understanding and who were sensitive of who I was — as I look back, I think I was fortunate.”

Growing up in Keene, he asks rhetorically, who were your friends? Catholics and Protestants. It gave him an early foundation in interfaith relations, highlights of which would later include meetings with Popes John Paul II, Benedict XVI and Francis.

In high school, Mariaschin was a disc jockey at weekend dances, which led to a job at WKNE. He worked weekends, summers and holidays from 1966 to 1972, through his college years at the University of New Hampshire. He worked on-air morning drives, evening drives, farm reports, police logs, district court reports. He did “Coffee at the Crystal” (restaurant), which were 15-minute interviews with local residents. He did Monadnock Scrapbook in the evening. He did some political reporting for CBS when the presidential primary rolled around.

“This was like being a kid in a candy store,” he says.

It was a training ground for later appearances as a foreign affairs analyst on television and radio, and as a lecturer on foreign and defense affairs at the U.S. State Department’s Foreign Service Institute and military installations across the country.

At UNH, he majored in history, charting a course for law school and eventually politics. He rang doorbells campaigning for Perkins Bass, Bernie Streeter, William Johnson and Walter Peterson. He figured someday he would run for the state Legislature and, ultimately, Congress.

He had a change of heart as a college junior, when serving the Jewish community became foremost, even to the point of considering rabbinical school. After UNH, he earned his master’s degree in contemporary Jewish studies from Brandeis University in Waltham, Mass.; later, in recognition of his lifetime accomplishments, he was awarded an honorary Doctor of Humane Letters from UNH and the American Jewish Communal Leadership Award from Brandeis.

He dabbled in politics for a couple of years, serving as director of communications for former secretary of state Alexander M. Haig Jr. during his 1987-88 presidential campaign, but returned to Jewish advocacy thereafter.

He looks back at his career not through a series of individual achievements, but wrapped as a bundle.

“I set out in 1971, didn’t know what it was I would do, but the impulse was to serve in some way the Jewish people. Then it took on different iterations, started in Boston, went to New York. I satisfied my own political interest working for General Haig, then came to Washington,” he says. “I don’t measure it in accomplishments; I measure it in that I’ve been fortunate and I’ve been blessed to do what I want to do.”

He thinks back to those long-ago, current-affairs discussions over dinner that he coveted with his parents. If they could join him for dinner now, he is asked, what would they say?

“They probably would have said I made the right choice.”

Daniel S. Mariaschin: At a glance